While a small PWay gang went out to Bishops Cleeve on Wednesday, the main gang started the serious task of dismantling the track to be relaid between Winchcombe platform (end of last year's relay) and Greet tunnel. 17 lengths are involved, as well as the repositioning of the southern turnout. 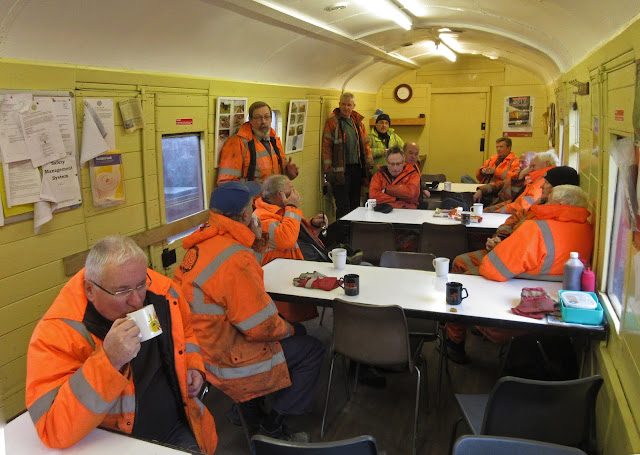 Wednesday started with... tea! Well, and a technical briefing by Dave, it does help if we all know what we are doing. An extensive written script was also circulated, and at the time of writing we are bang on target. 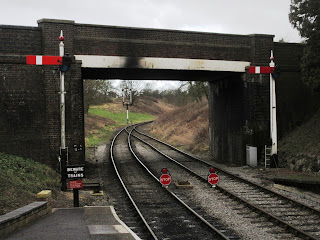 Just to give you an idea of the job, here is a view from the end of the platform extended last year.

The platform relay can be identified by the lighter coloured, new ballast. Stop boards have been fitted, as round the corner there is already a big hole in the track. 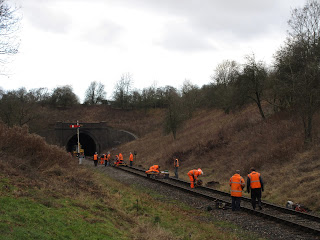 Work on dismantling the track started at the tunnel end, and the gang worked back towards the station.

In this picture you can see them de-keying the rail (bullhead on chairs), and in addition two gang members are on petrol disk cutters to cut the rail ends off. Why this is done when the track is fish plated, you will see in a moment. 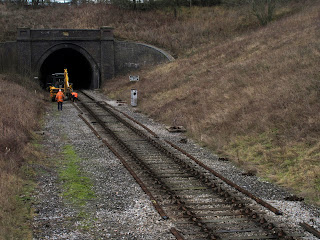 They leave behind them long rails with short bits cut off, tipped into the cess, ready for removal of both rail and old sleepers. Steve is ready with the digger. Access here is difficult, as we are in a deep cutting and shunting continues in the platform at Winchcombe. So how did Steve get here?
A: Through the tunnel! 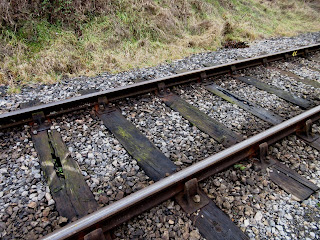 What is the matter with the existing track then?

This shot shows you that the sleepers are life expired, many have holes in them. It is thought that this section of track is the original, bar some spot re-sleepering, laid back in the 1980s, when the railway first laid track back on what was then an empty trackbed. 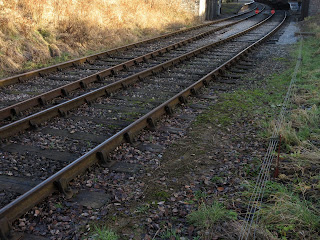 A second problem is drainage. You can imagine that at the bottom of this deep cutting there is quite a bit of water (there are loud gushing noises emanating from the inspection pits). It is in our interest that the site drains well, and as you can see in the foreground of this picture some of the ballast is contaminated with clay. This will be dug out and replaced.

The third reason for the relay is that we would like to improve the length of our platforms and loops. Winchcombe platform 1 was increased by 1 coach length last year, but the loop was not. During this relay we will move the southern turnout further south by two rail lengths. This will bring the toe of the turnout up to the bracket signal, which will stay in place. The extra lengh of the loop will then permit a loco to stand beyond the platform, using it fully for coaches. 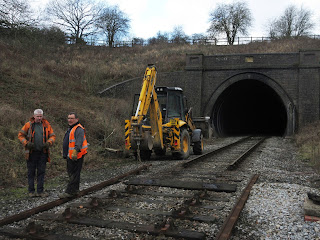 Good progress was made by lunch time, and we see Andy and Steve here discussing the next step. It was decided to drag the rails into the tunnel, and after further clarification, also dismantle the last panel still in situ here by the tunnel mouth. 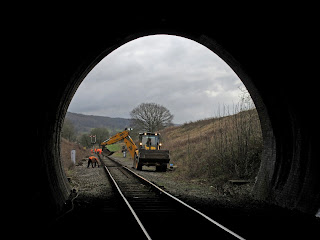 The view from inside Greet tunnel is quite something, not a scene you get to see very often.

A warning notice at the entrance warns people that both rail and vehicular traffic can emerge unannounced and at any time!

Steve has his lights on, just in case. 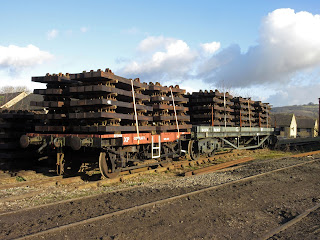 During our walk back to the mess coach for lunch (unfortunately a sandwich one this time, come back Jim and Paul, all is forgiven!) we passed these flats. They are loaded with new sleepers, fitted with chairs, which are for the relay that we are now doing. Good planning in evidence here. They are ready to go in. 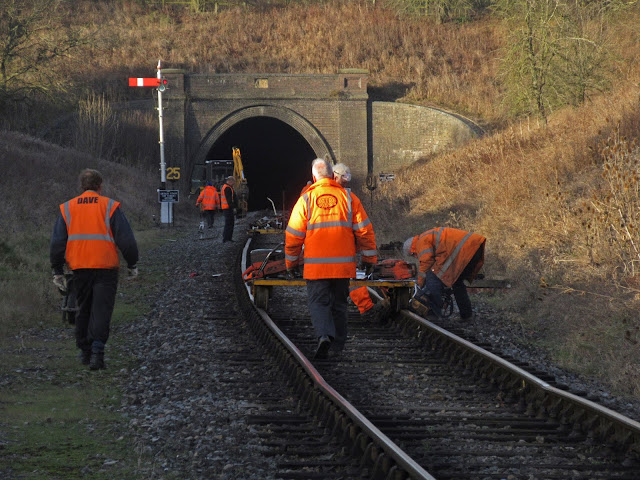 So why are we cutting the ends of the rails off?  Take a look at the rail in the centre of the photograph, it has two dipped joints. That's not just a little 'clickety-click', it's a bad thump every time for every axle. As our rail was originally second hand, the problem of crippled ends has only got worse. Now it's time for radical action. The ends will be cut off, and the good, straight parts of the remaining rail welded together into longer lengths. This will save a lot of time and money from broken springs, and the exasperating jacking and packing. 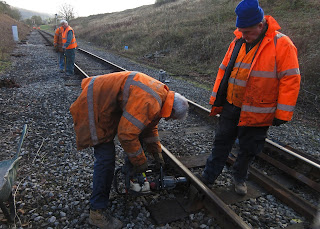 After the decision to remove the final length by the tunnel mouth, Andy takes off the fishplate nuts with the nut runner.

A boot from the other side makes sure that the bolt doesn't spin round. We all have our little job. 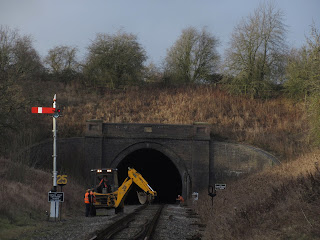 With the fishplates off the final length, Steve is hooked up the to the rail and gives a yank.

Getting the rail out of bullhead chairs is not easy. A member of the gang is seen praying by the tunnel mouth.

Note the shadow across the site. The cutting is deep, and the light soon disappeared and we ended up working in the gloom at only half past three. 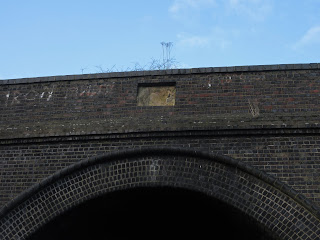 The tunnel entrance once had a date stone in it, but it is no longer there. It seems to have crumbled away; pieces of it are on the trackbed underneath. It probably said 1906, the year the line was extended to Gotherington and Bishops Cleeve. Probably not so expensive to replace, but how to put it back in position? 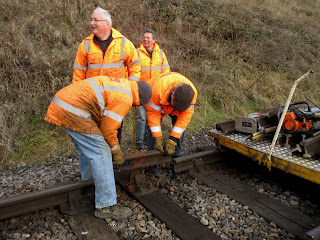 The crippled rail ends that were cut off now just need removing.

Easier said than done, they are surprisingly heavy. A volunteer struggled on his own with the nearest one; two decided to lift out the other. 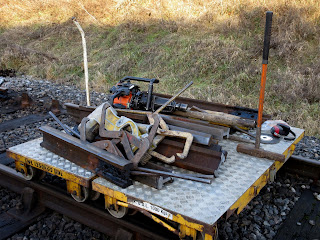 There they go, on to the trolley.

This is heavy too (everything is heavy on the PWay) so the designers used a lot of aluminium, and split the trolley in two. That is do-able for two people. 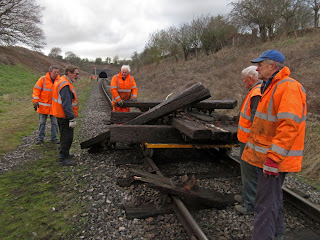 In the failing light on Wednesday, we had panels 17 down to 6 out. This was pleasingly on target. Steve started to bring the old sleepers back to the trolley for dismantling in the yard, and you can see their quality by the broken one in the foreground. Of course not all are like this, they don't all go at the same speed, and some are even OK for re-use on other projects. 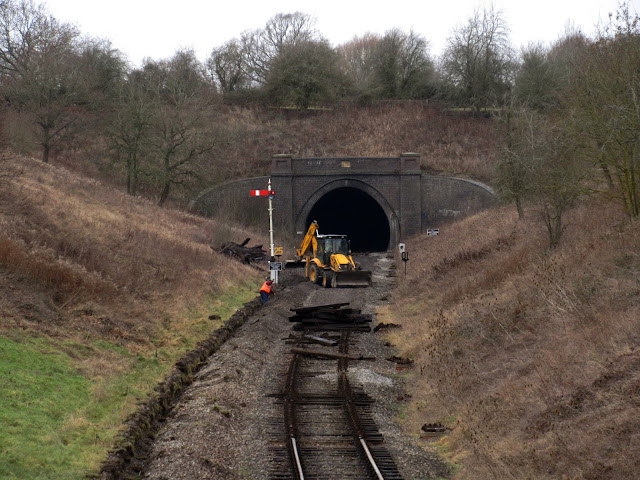 With the JCB on site anyway, it was put to further good use with a trench to bury a signalling cable. It needs to be protected from accidental damage, as that side of the track will be very busy in the next few weeks.

Can you imagine the 9Fs with iron ore trains, and the Britannias with returning holidaymaker trains, belting non-stop through here on the curve through Winchcombe station. What a sight and sound that must have been. 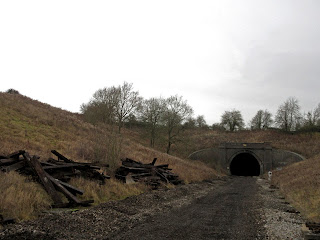 Steve has already made a good job of removing the old sleepers to one side, from where they will be loaded to return to the yard on the other side of the station.

The trackbed has already been levelled again, so that it is nearly ready for the next stage, which is relaying the track here. 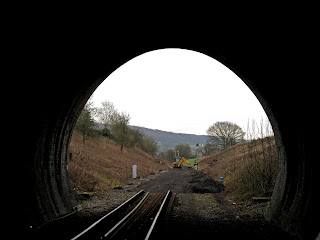 From inside Greet tunnel you can see the newly levelled trackbed, rails dragged into the tunnel mouth for temporary storage, and Steve working in the distance on back filling the cable trench. 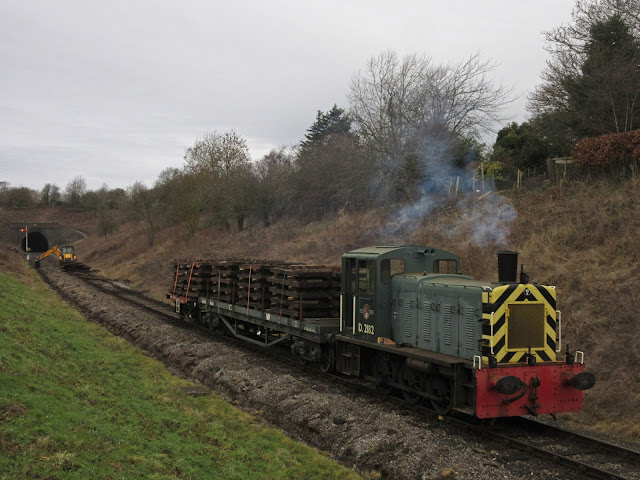 While Steve was busy back filling this morning, Neil took the 03 into the PWay yard to collect the two flats filled with new sleepers. These were parked on panels 5 - 1. The relay has been split into two sections. A longer one at the tunnel end, which will be completed first, using the sleepers on the wagons, which can be unloaded where they are parked. There is no vehicular access through the station. Once the tunnel end is done, the bottom end can be completed, with the moving of the turnout the final and most challenging job.

Don't forget to follow all this on Nigel's PWay Flickr site:
https://www.flickr.com/photos/gwr_permanent_way_photo_log
It is quite possible that track will be relaid as early as this Saturday. 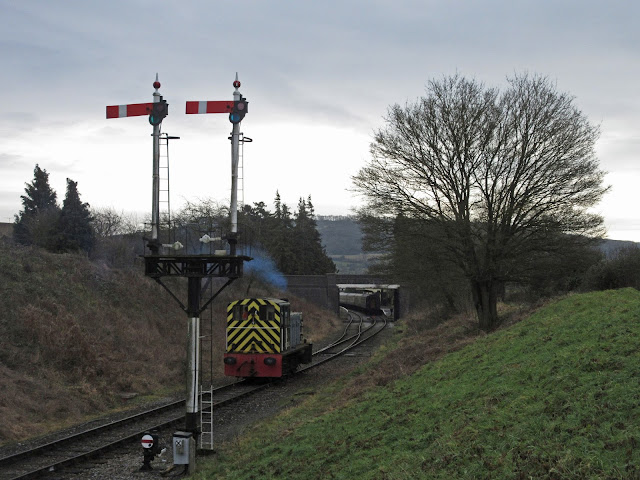 As the 03 returns back to its duties as Winchcombe yard shunter, you can see the current position of the turnout, and, between the bracket signal and the shunter, its new location.

This will be a challenging job for the gang. The turnout is located in a curve, with a spur to the left, which will then have its own curve to deal with. Remember when you never had the right curvature rail in your Hornby set to close that gap?