As mentioned previously, track laying is now paused while the PWay gangs make use of the non-running season until / including March 3rd to keep the running line in fine fettle. In recent winter seasons, the platform lines at both Toddington and Winchcombe were relaid, and this year it is the turn of the stretch between Winchcombe platform and the entrance to Greet tunnel. This will include moving the southern turnout two panels further south, to allow longer trains to stop at Winchcombe.

During the next two months therefore we will have a look at what else the PWay dept. is doing, with occasional forays into the Broadway extension where the contractor will be working from time to time on completing the ballast run to Childswickham, ready for extension track laying to recommence in March from Peasebrook farm.

Today's first look will be in an unexpected place - Bishop's Cleeve! The job here is actually to replace the roof of a culvert for a stream running under the line near the foot crossing by the former station. The PWay dept is involved because the track has to be removed so that the contractor can access the culvert. 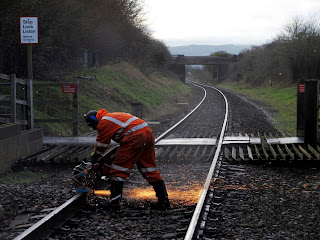 Our good friends Haigh Rail accepted our invitation to help, because the track here is continuously welded and to cut, and then later replace this, is a specialist job. In this first picture you can see the foot crossing, in frequent use, and in the foreground one of 4 cuts that were made. 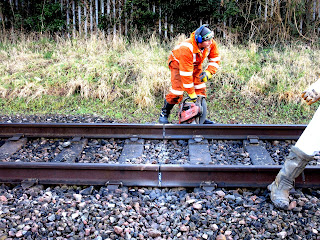 Despite the relatively cold weather - about 5 degrees C today - the track hardly moved when it was cut through. Although yours truly was surprised (expecting some sort of loud 'twang') Haigh Rail were not. They had an interesting App which, if you entered the length of the section, the length of rail to be cut, the type of rail, its type of steel, the outside temperature and many other variables, it told you exactly what sort of gap would appear. It was a small one. Ah. 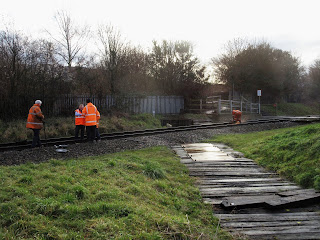 Here is a view of the culvert in question. In the foreground is a covered extension, and part of the trackbed that was once in use for the second track.

Only 3 members of the PWay attended, with just the modest job of removing the track fixings and to help Steve with attaching the chains to remove rails and sleepers. 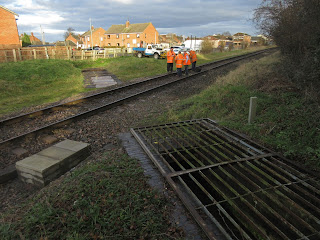 This is the view from the other side, with the culvert in the front diving under the track only just below the surface.

In the background is the former station site, with a taller building in the top RH corner built where the station buildings once stood. We did have a go at purchasing the site, but were outbid by what is believed to be a day nursery. The buildings are currently being converted for their new purpose. 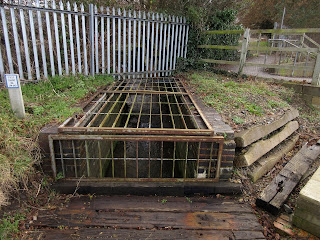 A close up of culvert 39A. Much of the roof is made of second hand wooden sleepers, and these will now be replaced by contractor placing a more permanent and longer lasting concrete roof. Under the running line there was a steel plate to support the line. 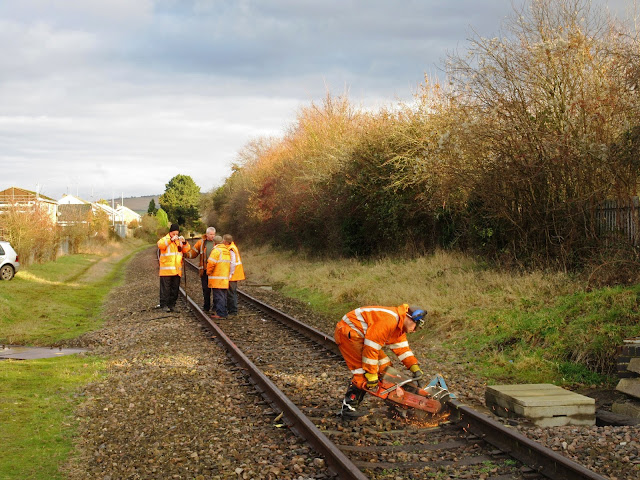 As Haig Rail cut the line, volunteers from the railway hold a top level discussion. This is the view northwards. On the LH you can just make out the taller former British Legion building with scaffolding around it, and in the background you can see the pines that marked the position of the GWR station. 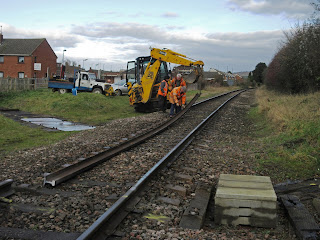 With the rails cut and the fixings removed,  Steve can now drag the rail northwards and out of the way. 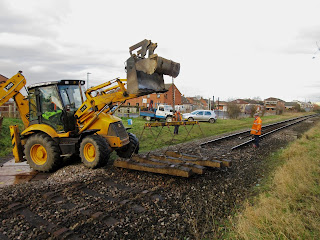 Steve then removed 20 concrete sleepers, which were stacked further up the line, ready to be put back in 3 weeks. 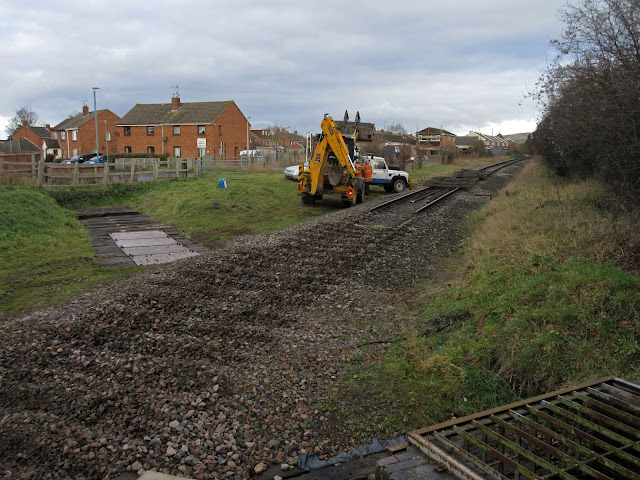 At lunch time, our involvement here was completed, with rails and  sleepers removed and  stacked at the north end.

The site is now ready for the contractors to start their work.

The main PWay gang was already at work at Winchcombe, where rail was also being cut and removed. More news on the Winchcombe relay will follow shortly.