We are doing well at Winchcombe, after another day of great progress. 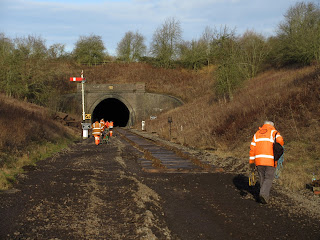 Working in tandem with the Wednesday gang, we set out to continue the relay from where they left off, and this is the opening shot of the day. There was rather more tool dragging up the line than on Wednesday, as the JCB was in the yard and had to travel all the way round by road and tunnel in order to arrive back on the trackbed. 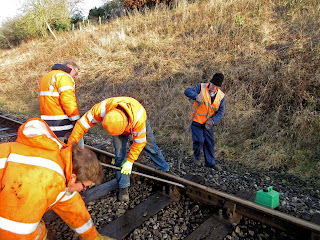 The 16-odd volunteers split into several independent gangs and rattled away on different jobs, here taking off the fishplates on the next panel south.

Just because you have undone the bolts doesn't mean that the fishplates are going to come off. A bit of friendly persuasion from a crowbar is often necessary. 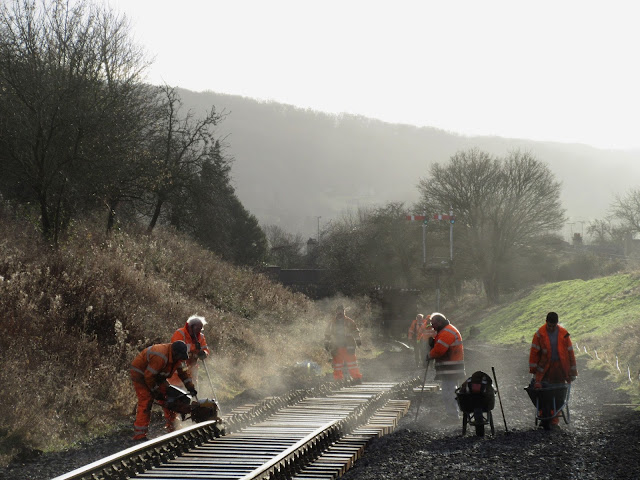 A second team cut the ends off the last rail laid, generating dust, sparks and smoke on this ice cold Saturday morning. Hayden brings up another barrowload of tools. 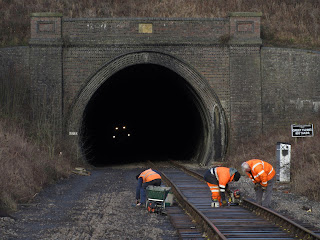 A third team was occupied drilling fish plate holes into every other joint. We will have 120ft panels here, with a welded joint in the middle. Less the bits we cut off, OK, OK.

A pantomime case of 'Look behind you' is building as a train threatens to burst out of the tunnel....

Actually, it's Steve arriving in the JCB, having accessed the trackbed at the other end. He was followed by Alan in the Telehandler, so we had two machines working with us today.

Did you know that the spot where the rail drill team is working was the scene of a grim accident in 1928?

The poignant thing about the accident is that a gang of 45 GWR platelayers were doing exactly the same thing as we are - resleepering the track between the tunnel and Winchcombe station. The only difference was that their line was live, while ours is closed for the winter.

As you may know, the 693yd Greet tunnel has a kink at the far end, so that you cannot see through it. On 29th March 1928 flagmen were stationed at both ends to warn of approaching trains. The gang stepped aside to allow a southbound freight train to pass, which duly rattled by and filled the tunnel with smoke and steam. Some of the men were working outside the tunnel, and some inide. Those working outside resumed work once the train had passed, but failed to notice that a 'rail-car' had now entered the tunnel from the Cheltenham end. (presumably what we call a steam rail motor today)

As the rail-car emerged unexpectedly from the tunnel, it struck 5 of the gangers. Three were killed, and two badly injured. They were taken to Cheltenham hospital by the 10.35 Wolverhampton to Penzance express, which was stopped before entering the tunnel.

It appears that the flagmen gave the signal correctly to 'stand clear' for both lines, but the smoke, noise and draught through the tunnel made it impossible for the platelayers to notice that a second train was about to pass, with awful consequences.

The gang downed tools for the rest of the day... 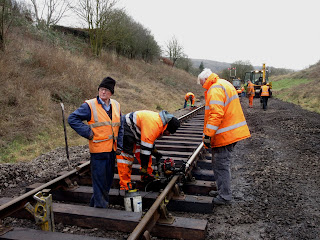 On Wednesday the team on the rail drill were handicapped by a lack of lubricant.

A big drum of it was provided for the team today, and rapid progress down to the railhead was therefore made.

John is thinking of other things.... 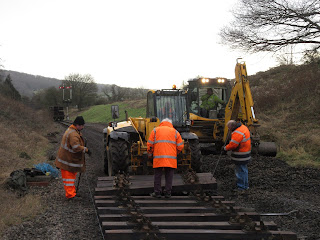 With the arrival of the JCB and telehandler, Steve was able to drag down more rails from the tunnel mouth, while Alan slowly emptied the two trucks in the background of their new sleepers, carefully placing these at the railhead. 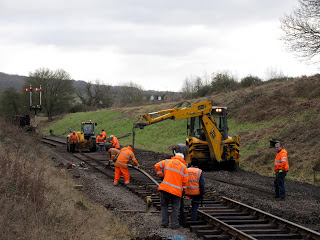 Once sufficient new sleepers were down, Steve was able to lift in rails.

The number of panels laid today was somewhere between 5 and 7, we rather lost sight of where we started, as it all looks the same.

You can see the progress as the laying team approach the old panels still in situ near the bracket signal. 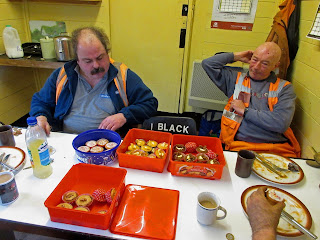 Soon it was lunch time, and we enjoyed a very filling meal of sausage, thick cut chips and beans expertly cooked by Jim. The high point of the meal of course was the cake baked by Mrs. B, although today we were actually treated to a selection of cupcakes for a change. Alan is considering his options carefully, as the choice was tempting and wide rangeing. Coffee and walnut, plain with icing and sprinkles, and chocolate were those tested by, ahem, yours truly. Well, if you think 3 cupcakes is a lot, Steve L ate five! This isn't helping the Christmas tummy get any smaller. 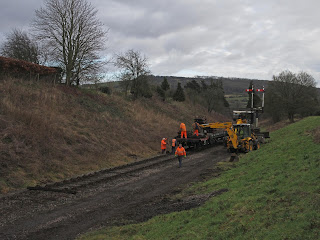 After lunch, the next two panels were taken out, leaving just two more under the supply train. We need to keep these for a while yet, as there are more sleepers and point timbers to deliver, and further north the bracket signal gets in the way. 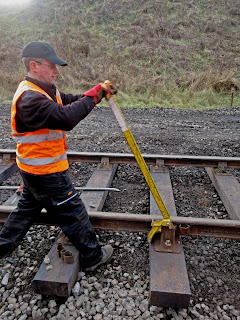 Nearer the tunnel mouth, the clipping up team was in action - yet another team - making slow but steady progress towards Winchcombe.

Although we have a good handle on the use of the Pan puller (here in the picture with Lee), getting the rail to sit properly in the chairs was very time consuming, as we kept having to lift various sleepers into position and packing them, before we could pull the next of the keys into its place.

That said, we got right up to the end of the track relaid so far, so we could sign that bit off. It looked nice and tight. 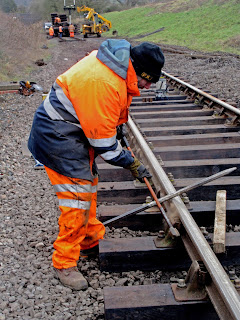 Steve L demonstrated the other way you can get Pan keys in - with brute force, insistence, a lot of experience, and a keying hammer. Hitting the rusty keys always releases its own little cloud of dust, as in the picture.

Steve L worked ahead of the main keying up team, and saved them a lot of the preparatory work. 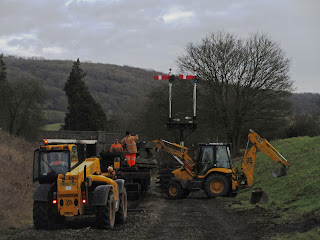 After taking out the rail on the next two panels, we had, for a moment, two machines on removing sleepers. Here Steve is dropping a load on the now empty flat truck, while Alan is waiting patiently with the next 4 sleepers freshly dug up. 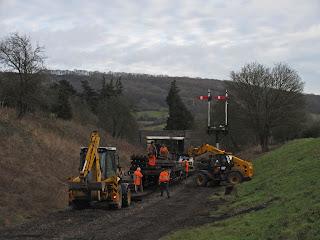 For a short while both machines were on the same job, and the two lengths were soon stripped down to the trackbed. Steve then started to level it in preparation for new sleepers. The supply on the bogie flat was taken off and parked by the trackside, so that the two wagons could be filled with life expired ones to be taken back to the yard for chair removal. 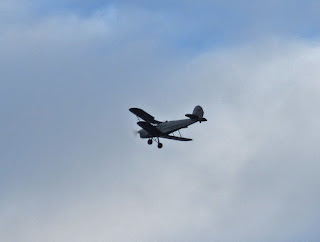 A slow revving engine overhead made us look up, to find a Tigermoth circling the station. The pilot sits in the open, and must have been freezing! We had just 4 degrees today, and the yard was covered in pools of ice. 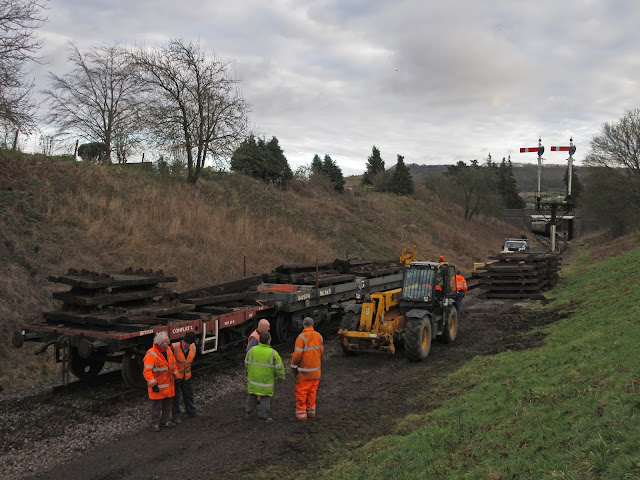 At the end of the day, which is imperceptibly getting longer again, thank God, a discussion took place on the next few steps.

The relaid track has now entered the curve, but will not follow it strictly, but will drift over by 3ft towards the bracket signal. This is to meet up with the turnout on the extended platform 1 road, the turnout being moved two panels towards the tunnel.

The ballast in this area needs digging out and is also life expired, so will be shuttled southwards by dumper to the other end of the tunnel, where it will be re-used to make a new access road. 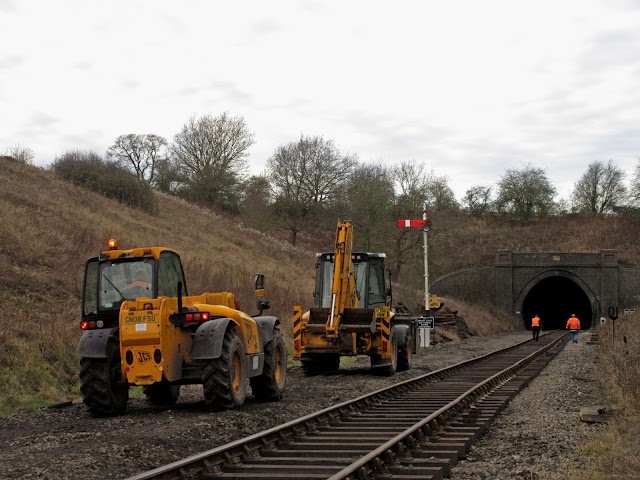 As we packed up our tools, the JCB and telehandler rumbled off in convoy towards the tunnel, to leave the track by the other end and return to Winchcombe yard.