Great progress is being made here by the Wednesday and Saturday gangs, and at the time of writing we are ahead of schedule. However.... this supposes the weather is kind throughout, which will be history by Thursday. Snow is forecast. We shall see, but so far, so very good.

The initial briefing from Dave in the mess coach first thing was followed by a second one from Clive... 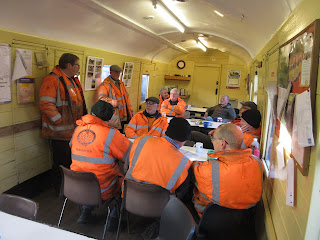 ...who advised us of successful negotiations to rent a ballast regulator for use on the extension. This had been high on our wish list for months, but was an elusive capture until today.

This piece of kit is important to us as we need to clear the rails of ballast dropped there by Dogfish from Laverton bridge, to Peasebrook Farm (currently) and later all the way to Broadway. The rail needs to be put on rollers for the CWR stretching process, and we did not relish the idea of cleaning a mile or more of track by hand. 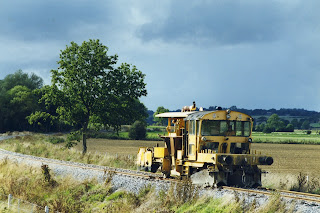 The ballast regulator is an older model, like this one, seen here on the K&ESR's Bodiam extension in 1999. It can plough the excess ballast (in front, on the photograph) and clean with rotating brushes (behind).

The brushes are currently life expired and as part of the deal we have offered to refit the new ones. The regulator will arrive next week. 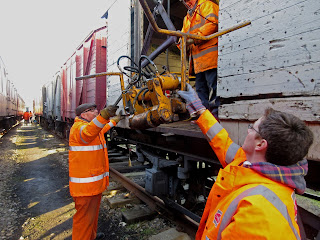 The working day started with a crew of 16, and sorting out the tools required for the job today. These were all heaved on two trolleys, which were then pushed up the yard, where they promptly derailed on the muddy crossing *!$###** and we ended up throwing the whole kit and kaboodle onto two different trolleys, with bigger wheels. 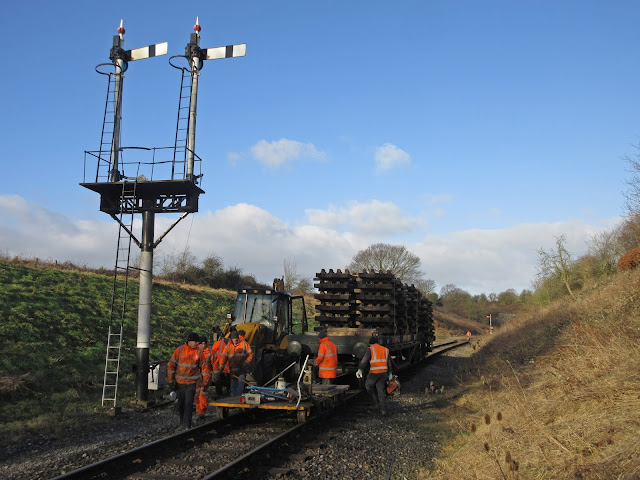 Arriving on site, we were pleased to see two heavily stacked flats with more sleepers. Unfortunately our plans to lay some of these were stymied by the Telehandler being used for a training excercise today, so this will be something for the Saturday gang. 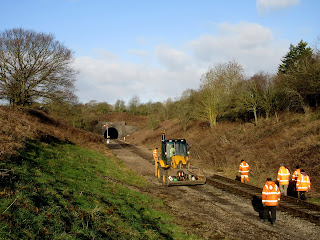 We're in luck in a way, as the work site is relatively close to where we keep the tools. More often than not, all the kit has to go in the Landie and be driven for a number of miles first.

Here is the JCB reversing up the track to the tunnel mouth, where the job will start today.

Our starting position was a cleared trackbed up to panel 6, and a fine row of new sleepers just waiting for the bullhead rail to be placed back into their chairs. 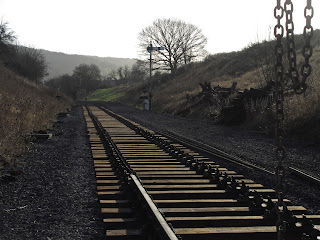 The sun was tricky for us, low and strong and blinding if trying to communicate with the JCB driver.

Here you can see the sleepers that awaited us, with some of the life expired examples piled up on the cutting side. 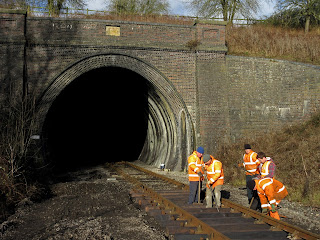 During the morning we laid 4 rails into two panels, and two teams set about inserting the Pan keys to fix the rail into the chairs. This proved to be quite a challenge, as we were used to the circular Mills type keys, which are somwhat easier to insert, but have the habit of working their way out again over time.
A special Pan Puller bar exists, and indeed we had two examples of them. After some experimentation, a hybrid system of Pan Puller and whacks with a keying hammer resulted in acceptable progress down the line. 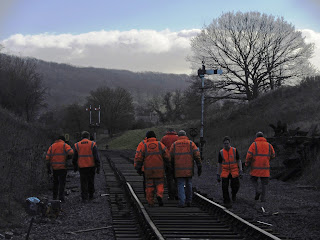 At 12.25 there was a sudden awareness that you were working alone.... an exodus towards the mess coach was taking place, for a 12.30 rendez-vous with an excellent Chef Paul, who luckily has not yet been discovered by the media. 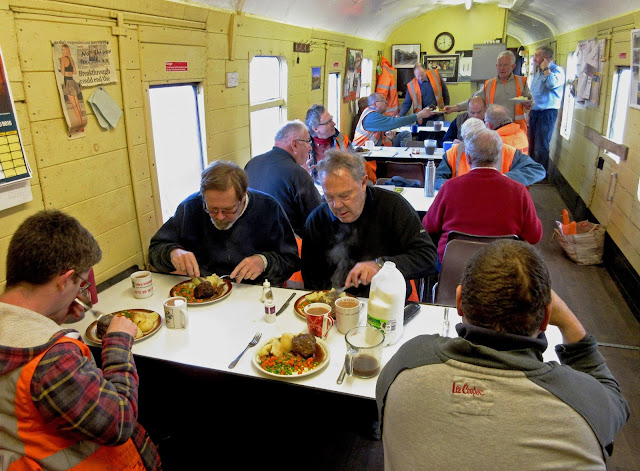 On the menu today: Faggots, peas, potatoes and thick gravy, each table being issued with its own jug of it. Maitre Paul came out of the kitchen (top right) to make sure that all was well; later he came out in the guise of Mrs. Overall to collect the plates on a trolley. You couldn't ask for better service, and all that for the princely sum of £2.50p. We shall return. 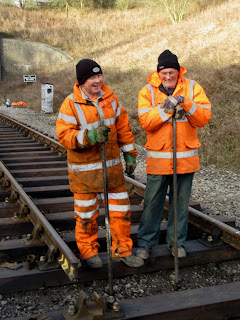 After lunch, enthusiasm for hard labour was somewhat subdued, and some spent a few moments recovering by supervising proceedings, holding up some bars and reflecting on the nature of next week's potential menu. 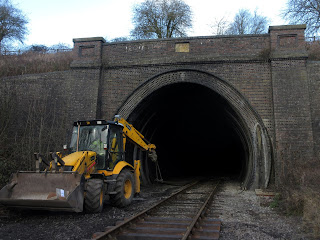 Behind them Steve had ventured into the tunnel to recover another pair of rails.

These are numbered, so that we know exactly which ones go back where. 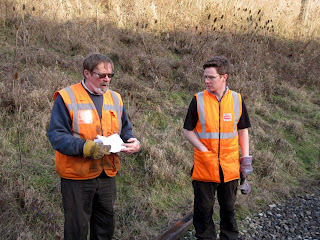 Dave held the Masterplan, and Peter's expression suggests that he may have been holding it upside down.

Was the running line on the up or the downside again? 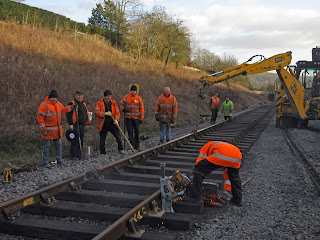 Once a pair of rails was in, the northern ends had to be cut off (the southern ends were cut off on dismantling) and this was the opportunity for the youngest member of the gang to show his skills, while the older ones looked on. It was always so. 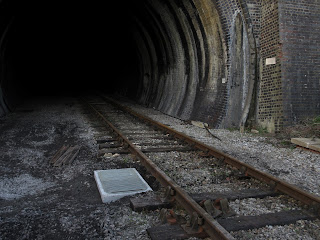 An interesting issue that came up was the discovery of a buried catchpit in the six foot (centre of the line) and this exposed the fact that the upside running line was not quite on its original bed.

The reason for this is that on demolition the ballast in the tunnel was removed, thus forcing the new track nearer the middle unless a lot of money was spent on replacing the ballast (not available when this track was laid, many years ago.) 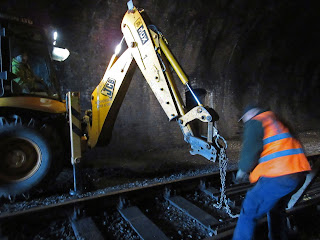 Inside the tunnel, Steve collects another pair of rails.

All in all, we laid 6 panels today. This is quite a pleasing result (6 out of 17) but the hardest bit is yet to come. This is the repositionning of the turnout, in a curve. And before that, there are 6 panels to take out and replace. 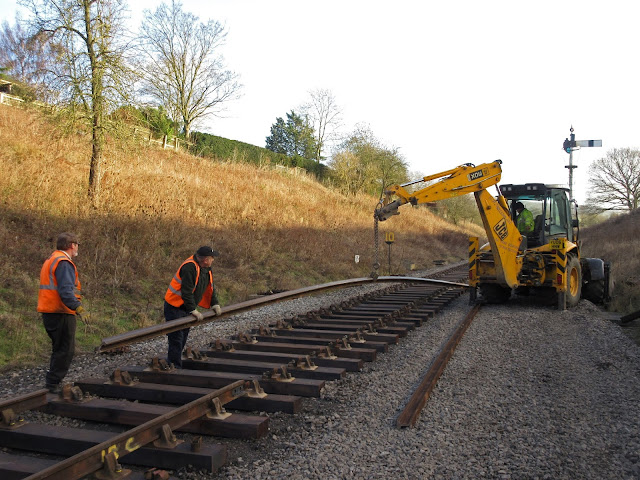 With the sun disappearing over the edge of the cutting, we placed a final pair of rails on our sixth panel for the day. Then it was: load all the gear up again, ferry it down to the trolleys, load the trolleys, roll them across Winchcombe station and into the yard, and throw (heave) them back into the various vans.

It's dark now, so time to go home and light the fire! Another very satisfactory day.

On a different tack, viewers may already know the Flickr site which shows, inter alia, trackbed walks along the old Honeybourne line where track has not (yet) been relaid:
https://www.flickr.com/photos/73536293@N02/sets/