Another gloomy day today, with mist to start with, so much so that you could not see the destination with a dumper full of ballast. Just follow the trackbed then, that will get us there. 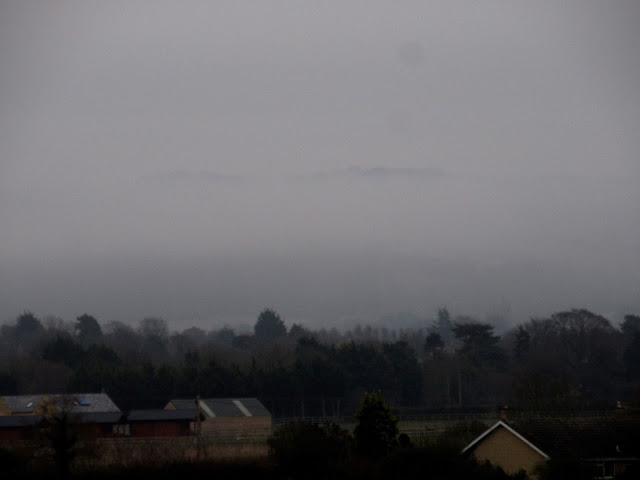 It's quite pretty really, this mist. On the way back from the first load, the Cotswolds Edge could be seen peeking out from the mist over Broadway village. Can you see the dark stripe in the middle of the mist? Amost spooky, that. 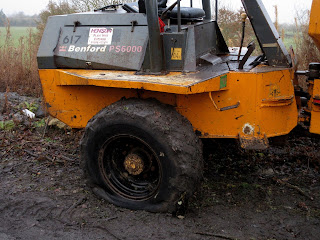 The puncture on the 6T dumper, seen here with a completely flat tyre. We were down to one dumper all of the day.

The tyre people came to have a look, but decided the damage was so great a new tyre was needed. That will happen tomorrow at the earliest. 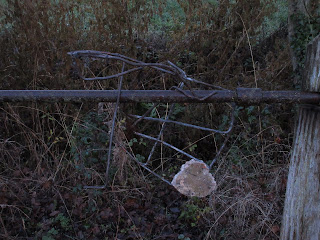 This is the sort of reinforcement steel that caused the problem. It sits under the surface, with a sneaky bit sticking out which slashes the tyre. As everything is brown it's virtually impossible to see. 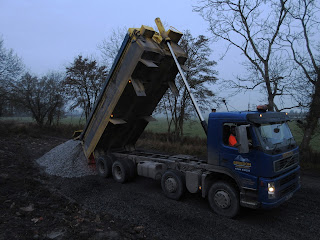 The second thing that influenced us was the ballast deliveries.

Six loads had been ordered, and at the start of the day one was already there, with a second load just being dropped.

Very cheering, that. Now we can get on with things. 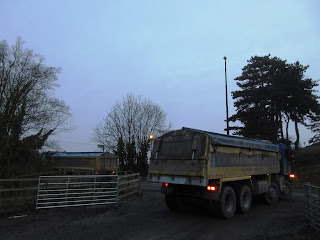 The second lorry hadn't left yet, as the third one turned up. Now you can see why we had to increase the size of the gate, and the turn-in outside.

It's all go here!

Unfortunately the third lorry was also the last one. Some problem with the crusher, we heard.

More deliveries have been ordered for Tuesday and Wednesday.


With only 60T of ballast delivered, but only one operational dumper, one problem sort of solved the other. It meant that up to lunch time we could ferry new material out to the coal face until the stock was exhausted. After lunch, we could level the piles taken down last week. Here's a view of the site near the start of the day. The darker piles at the rear are those of Friday. Saturday was a Broadway day. Today, Monday, we resumed after leaving a gap, which we would fill with an expected excess at the far end.
The fencing material is for the field below on the left, and the gate is for bridge 4 at Peasebrook Farm. There's more to a track extension than just laying sleepers and rails; we also have to meet our responsibilities towards our neighbours. This is mostly drainage and fencing. 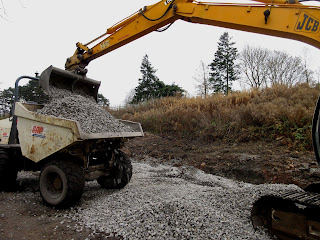 After 7 trips down to the coal face the 60 tons were all used up.

Here is Adam filling the dumper one last time (today). 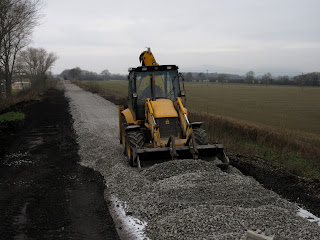 The focus of activity then switched to the southern end of the piles, where Steve was doing a great job in pushing out the piles so that an 8 ins bed of new ballast on Terram was achieved. This is then ready for laying the track. 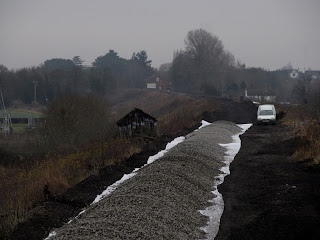 The excess is scooped off and into the 9T dumper, whose bucket is the same width as the JCB's, so that's very handy for filling.

It is then reversed up that track and re-dumped at the northern end, extending this further even though we've run out at the level of the stockpile. 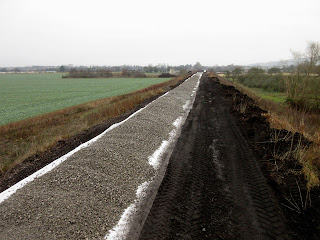 The previous picture was taken with a zoom, which makes the goods shed look  really close.

This picture was taken with a wide angle, which makes the stretch of ballast already dropped look almost infinite.

All this bit still has to be levelled off by Stevie on the JCB. We did about 150 yds of it today. 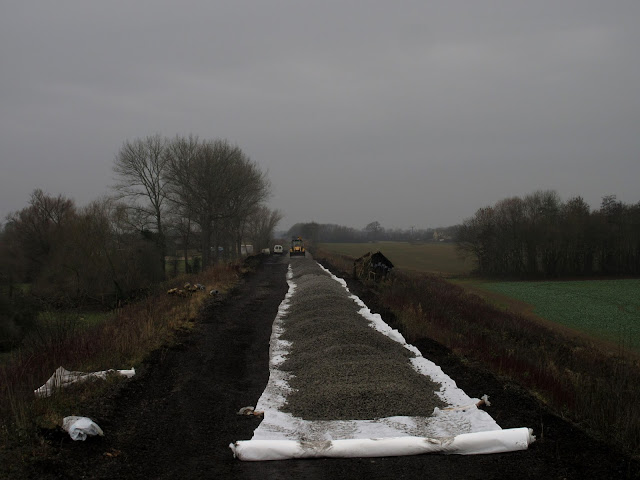 At the end of the afternoon, in the falling light, we were well past the PWay hut, and as well as the 150yds levelled down south, we had extended the ballast in the northerly direction by another 100 yds.

All in all, we have done about 300 yds of ballast so far. The good news is that with every trip fom the stockpile, that is now 300 yards less that we have to travel, so gradually work will accelerate. 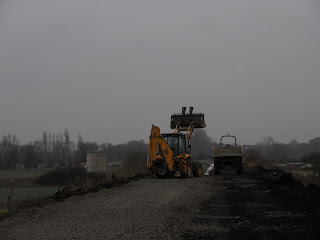 Here is Steve filling the dumper one last time today. As you can see, the PWay hut is now behind us, and we are approaching the sewage farm. Pry Lane bridge is our next 'objective', if all goes well.


For a change from lots of pictures of gloom, mist and ballast, here's a historical picture of a freight train passing the Broadway goods shed: 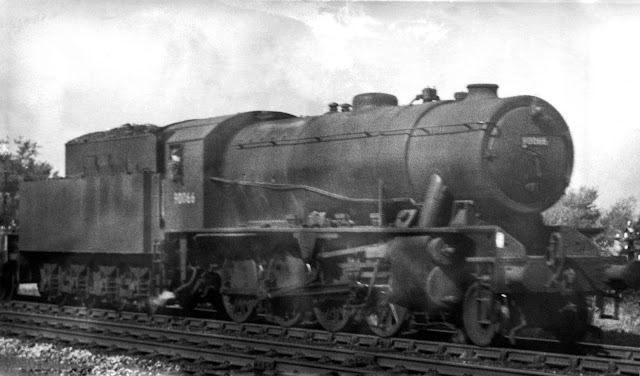 It's a picture taken by John Diston in 1959. It's of a freight train from South Wales heading north, and the location is near the Childswickham Road bridge. John had the opportunity of stepping back here because the embankment is wide at this point. Behind the loco you can just see the top of a telegraph pole. This was a very tall one, as it was planted down at the bottom of the embankment (where all the rubble is now) but the wires stayed more or less level with the track. There used to be allotments here; the word is that the allotment holders gradually gave up because with all the people using the railway's private road here, a lot of their produce kept disappearing...