It was a challenging day today, in more ways than one.
The tyre repair company didn't come, so our carrying capacity was nearly halved, with one dumper down.

This of course is the moment that vast amounts of ballast are delivered. Arghhhhh! 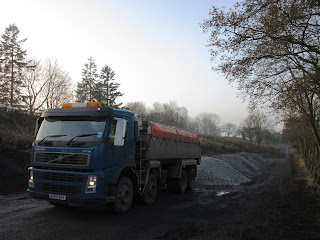 We received 14 lorry loads of the stuff today, and with another 5 due tomorrow there was a worry that we might not clear enough space for them to drop it. In the end it worked out OK, and the 9T dumper rode up and down no fewer than 15 times. 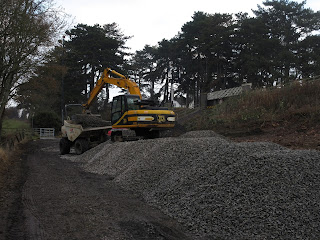 The 9T dumper performed faultlessly (after blowing a tyre with a loud bang last Wednesday) and Steve was soon seen loading it even before the first rays of the sun peeked out over Broadway hill.

There was no sign of Adam though. He then called in to say that an attempt had been made to break into the contractor's Transit he had been using, and while the theft attempt failed, the perpetrators ripped out all the wiring from under the dashboard.


We had been waiting for Adam to bring more fuel, so in his absence we eventually had to go ourselves, stopping at Toddington to collect 10 gallons. After this delayed start, ballast moving commenced, but an hour late. 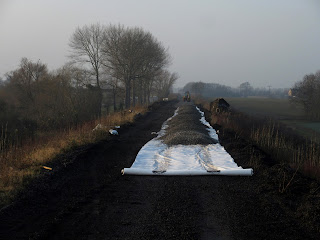 Here is the end of the Terram, as seen first thing this morning. You roll the Terram out a bit, then drop your ballast load on it. Today there was a complication - wind. Roll out the Terram, climb back on the dumper, put it into gear - now the Terram has billowed out of place. Climb back down, find some stones... 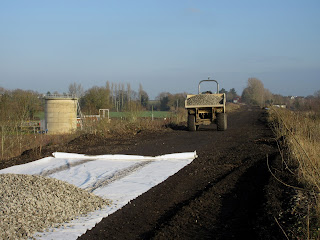 The wind seemed to die down as the sun came down. It felt very cold without the sun, but at coffee time, and in sight of the sewage plant, the sky turned blue and it became quite pleasant. Not such a bad day after all.

Here is the dumper, parked up so that the Terram can be rolled out a bit more. Oops - need a new roll here. Where is it? 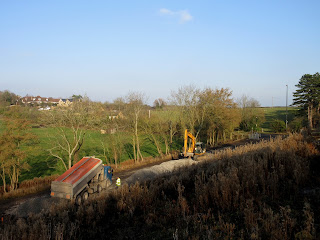 Returning empty to Broadway, we find that another lorry has turned up.

Annoyingly, the first lorry of the day (very early, way before your alarm clock rings) dropped his load short, leaving a large gap at the rear of the long pile, and as the last lorries came, not enough room at the front.

We persuaded this one to bypass the long pile and drop a bit more at the back. 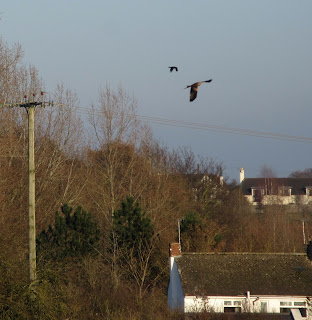 What was fascinating today was the sight of two Red Kites. They were wheeling and hovering in the icy breeze, over the edge of the embankment between bridges 2 and 3. What they were doing was not clear - a Sparrohawk hovers and from time to time drops down to catch a mouse. While the Sparrowhawk could hover almost motionless in any wind, the Kites seemed to be more frisky, flying in and out, wheeling on their wing tips, never in the same place for any amount of time. They did not drop down to the ground at all. Won't get fat like that then. 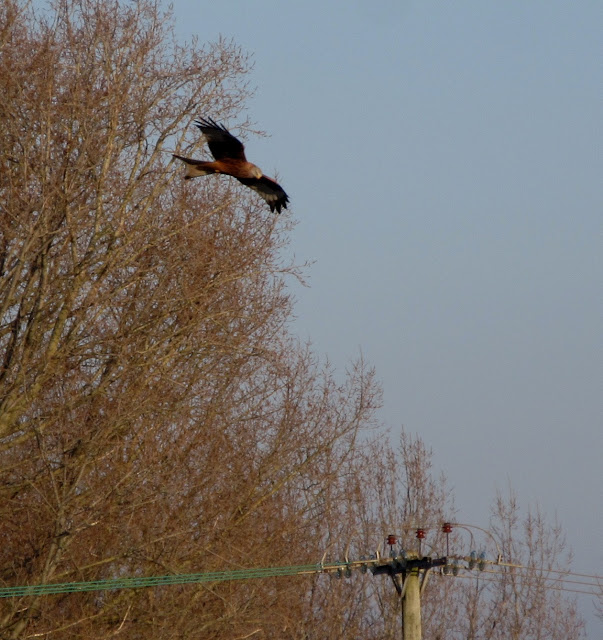 Have you seen a Red Kite in close up before? In this zoomed in cut out, you can see the 'V' shaped tail, and red colour of the body. Magnificent creatures. 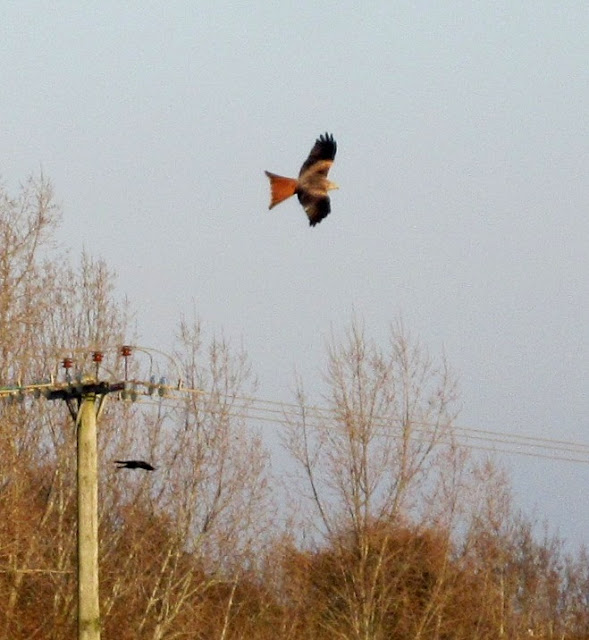 Seen from above as it wheels around in front of the camera, you can see quite striking colours in the tail, body and wings. We are very lucky to be able to witness these.
A gull and several crows tried to bother the two Kites into leaving, but they would not be swayed and continued patrolling our embankment. 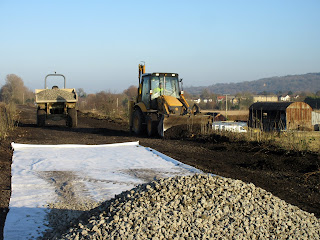 After lunch, Adam finally managed to get to us, and this allowed Steve to split off and continue widening the trackbed. There needs to be enough room for the Terram, and a roadway down the side. Many small saplings are pushing up on the shoulder of the embankment, and these were ploughed away. You can see where the track used to lie by traces of rust in the old ballast. 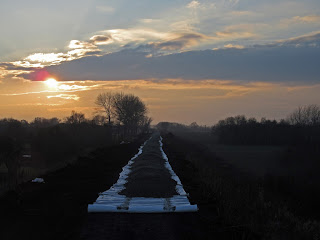 At the end of the day - the sun goes down at 15.30 already - we had just about done another roll of Terram, or 100 yards. You can see the old PWay hut as a small dot in the distance now, with Pry Lane bridge now approaching behind the camera. At this point we are level with the sewage works grounds. 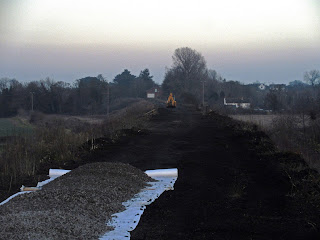 Looking north at the end of the day, the ballast droppings have reached a point just over 100yds from Pry Lane, just about visible in the gloom here between the end of the Terram and Steve on the JCB, returning back to base.

We would quite like to reach Pry Lane bridge before Christmas, then do the rest to Childswickham Road bridge in the new year.

Even the ballasting team has a family ! 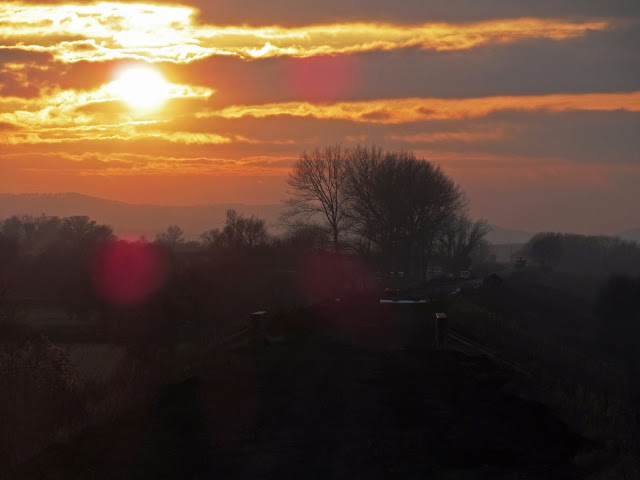 Here's another atmospheric end of the day shot. You can make out the pilasters of Pry Lane bridge in the foreground, then the white roll of Terram marking the end of the ballast drop today, and further along the PWay hut where we were 2 days ago. Right at the back, on the other side of Peasebrook Farm bridge (No. 4) is the PWay train.
With the sun going down, the temperature drops rapidly and it was only 4 degrees as we left for home. 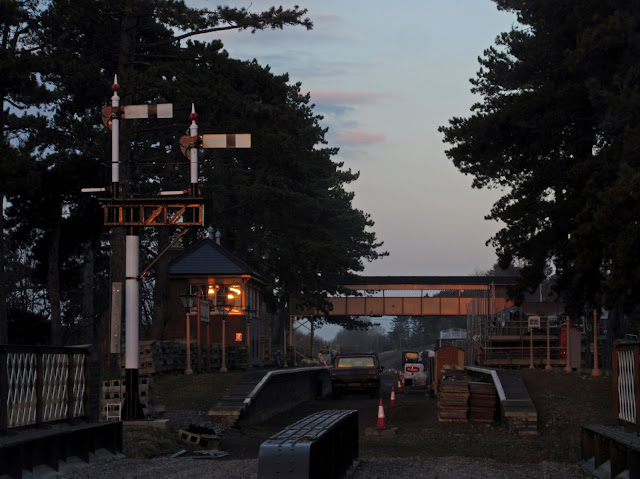 The last rays of the sun catch the windows of the signal box at Broadway, and the gantry of the bracket signal. There are no lights on in the box, it's all the reflections of the setting sun.
The van in front of the box belongs to the S&T depatment, who were working at Broaday today.
Great !

We expect to be working on Wednesday and Thursday this week as well.
Posted by Jo at 18:35