A day of good progress today, helped by ballast deliveries, reasonable weather, and the repair of the second dumper, thus re-doubling our capacity. Great stuff. 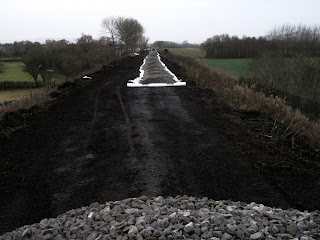 First trip of the day found the 'coal face' well clear of the old PWay hut, and the suspicions of a curve to the right veering off.

This is the start of the long, long curve that goes right up to the Childswickham Road bridge, past the goods shed, through Broadway station, to stop only on the approach to Springfield Lane bridge. 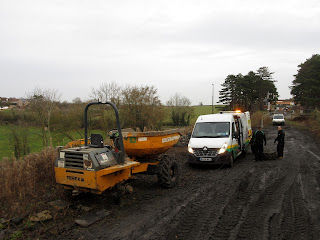 On the return journey, a sight ot cheer the eyes - the tyre repair people were here, and busy changing the defective rear tyre of the smaller dumper. At last! This took them until tea time, after which we were two. Tea time also gave the opportunity to sell a quick replica lamp post - people are leaving their Christmas shopping very late, it would seem. 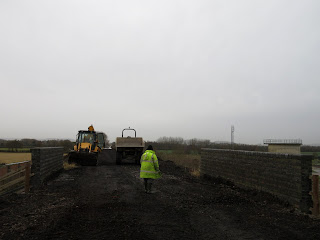 After tea, a conflab with Steve about the route the Terram needs to take.

It needs to be hard up against the bridge pilaster here at Pry Lane. We're not there yet, but you need to take aim from some distance away. 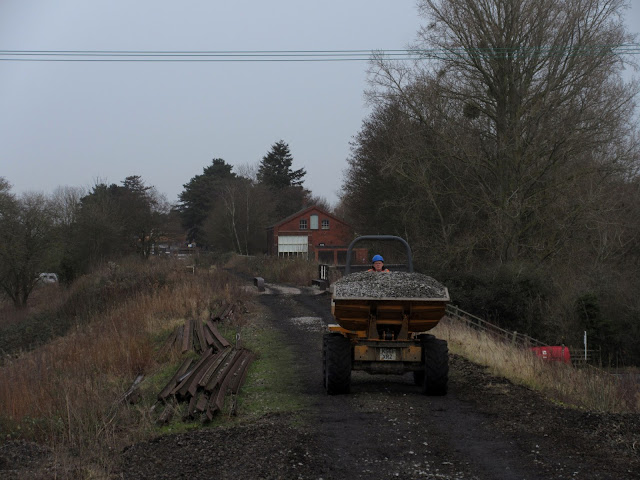 Then, finally, the second dumper growled into action, and here it is with John on board bringing the first load.  Our productivity saw a big increrase today. Not only are we running two dumpers again, but the distance to the 'coal face' is reducing all the time. With what we have laid so far, the saving is about 500m that we no longer have to travel on each trip. 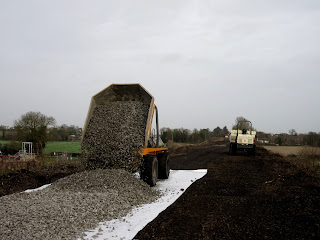 Here is John dropping one of his loads, with the Terram roll nearly all used up. Steve had to go off in the JCB and get two more rolls, which should see us through to Thursday. 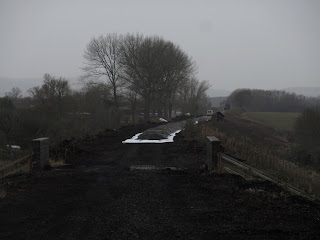 By mid day, and with a bit of photographic licence thanks to the zoom lens, you can see us now well into the curve and approaching the bridge. 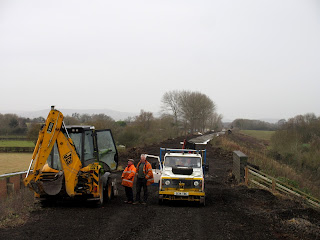 We also had the visit of some luminaries from the PWay team, who came to see for themselves what progress was being achieved.

Wednesday is one of the two PWay working days, and they came up in the road-railer Landie to chat to Steve about future plans. The next project, after Santa trains wind down, is the relay of the Winchcombe - Greet tunnel section. This will include moving the southern Winchcombe turnout further south by two coach lengths. The job is pencilled in for a period of 8 weeks, after which work will resume on the extension. 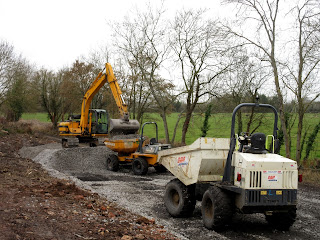 With the shorter travel time to the dumping site, there were moments when there was a 'queue' at the loading area to get your dumper filled.

At the end of the day, we had shifted everything that was there, and another 5 loads are expected tomorrow, the last of the season.

At the end of tomorrow the dumpers will go off hire for the festivities. 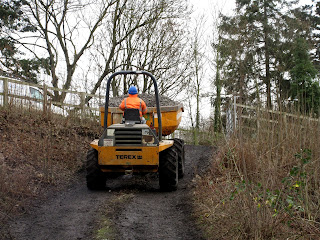 Here John sets out with another load of fresh ballast, attacking the slope up to the trackbed with gusto.

Will it fit your garage / in between the gate posts? It always does. 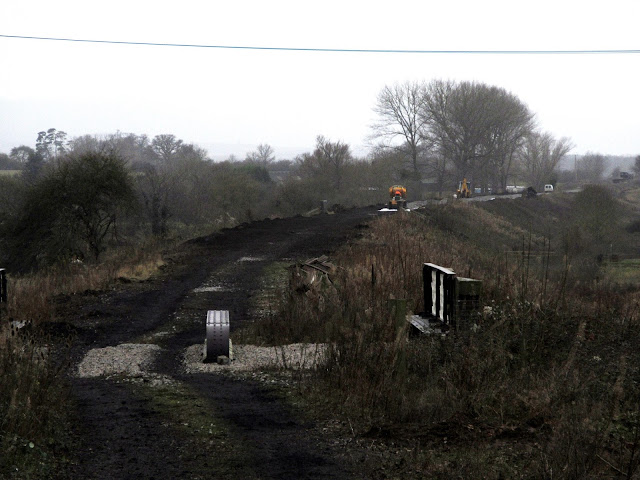 After lunch, an opportunity arose to make this nice record shot. Again, the zoom does compress everything, but you can see where we have been and where we still have to go. In fact the whole site is on it.
In the foreground is bridge 2, over the Childswickham Road.
In the middle distance is John's dumper, having just crossed bridge 3 over Pry Lane and discharging his load on to the freshly rolled out Terram, marked in white. This side of him, the trackbed has been scraped by Steve, making it wider and fresher looking.
From its location in the picture, the Terram will cross over from the right hand side to the left, in order to pass through the left hand (Cotswolds) opening on the bridge in the foreground.
The other (right hand) opening was going to have track on it, but this idea has been put on the back burner to save cash in the first instance. 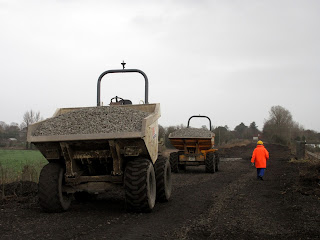 At the 'coal face' too there were moments when there was a queue of dumpers, here following a discussion with a member of the Broadway gang who walked out to see us. 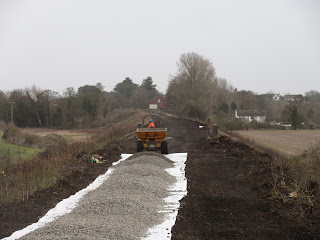 Shorty afterwards, with both loads discharged, you can see the ballast pile approaching Pry Lane, which is our target for the pre-Christmas session. It looks like we will achieve this, maybe even exceed it. 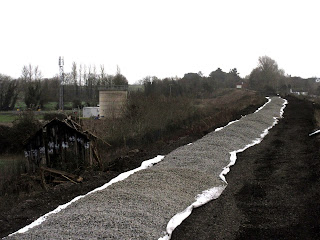 Stepping back a bit towards the PWay hut that we passed two days ago, you can see the ballast pile coming off the straight from Little Buckland and starting into the curve towards Broadway. 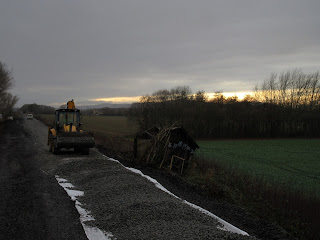 The view the other way, south, shows Steve levelling off the ballast pile, and creating a useable platform for track laying. At this point we had the 6T dumper bringing the ballast, and the 9 tonner working with Steve to carry away any excesses, which were also dumped at the 'coal face'. Light started to fade at this point. 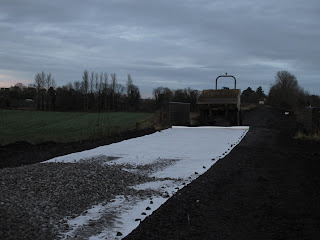 At the end of the day, the Terram actually reached Pry Lane bridge, although not quite yet the ballast drops - we need two more, but it was getting very dark.

Notice the little row of stones Cotswolds side to keep the cloth on the deck.

The wind then fell away just as forecast, to be replaced by rain, also as forecast. Oh well. 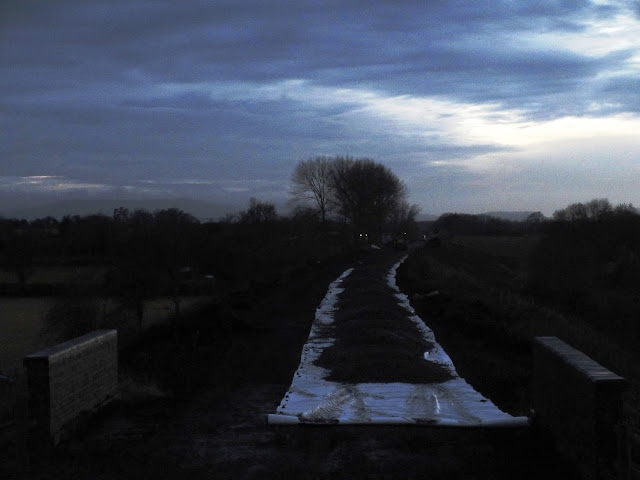 Our last picture of the day. Not such a beautiful sunset this time, as there was no sun, and the rain was drifting over from Dumbleton hill.

The last two drops did materialise after all, so now here we are at Pry Lane. Mission accomplished, but we have another day tomorrow! It was judged that we had achieved 60% of the total length to be ballasted at this stage. So 40% to go to get us to bridge 2 at Childswickham, but over a shorter distance to run.
Posted by Jo at 18:39