Out of the blue came a phone call yesterday, ballast lorries are coming, we are running dumpers down the trackbed to Peasebrook! 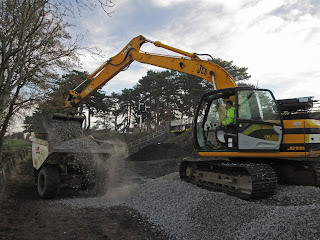 It was true. First thing this morning, 14 lorries had already come and created a goodly pile of ballast at Broadway. Adam was parked on top of the pile and ready to go. The 9T dumper was ready and the 360 had a 1T bucket, so work proceeded quickly. In 9 scoops the dumper was fully loaded. 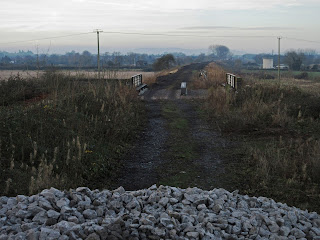 With the creaking load out in front, the dumper manoeuvered up the steep slope and on to the trackbed.

Here it is just about to cross the Childswickham bridge, with the goods shed behind the camera.

The objective - Peasebrook Farm -  is so far away that it is out of sight. It's near the trees centre right, in the distance. Way to go ! 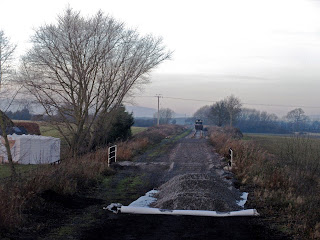 After a 10 minute drive the dumper arrives at Peasebrook.

In the foreground you can see the first few loads dumped on the Terram, and just beyond the handrails of Peasebrook Farm underbridge.

Beyond is the railhead (100yds still to go) with the ballast train parked on it. 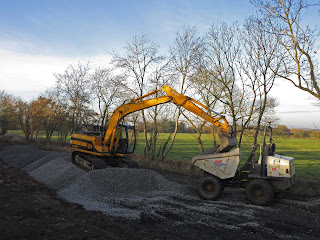 Then comes the long journey back again to Broadway, now very bouncy as the load has been discharged. The pace is modest as the trackbed, although freshly graded, is rough for a vehicle without springs.
During the absence, another lorry load has arrived. It's all rather relentless.

Tomorrow we will have two dumpers, and two operators. This will increase the efficiency enormously, as the second dumper can load while the first is on its way. Much less time for the plant operator to sit and wait, and twice as much ballast going out in the right direction. 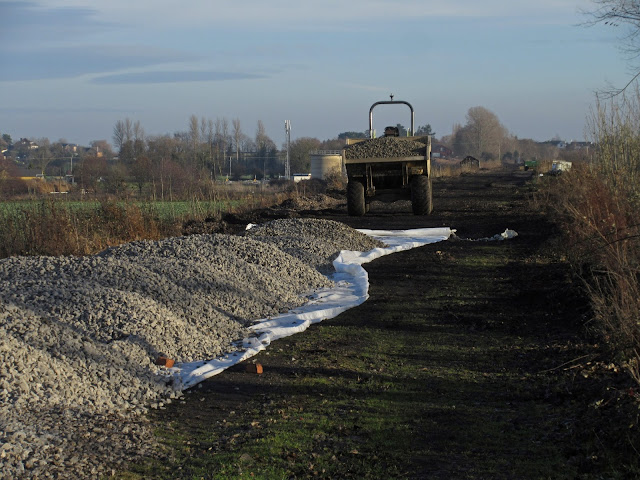 We were very lucky wih the weather today, as it was mild and only moderately windy. Nonetheless there is a noticeable wind chill on the high embankment between the two bridges. We are in December, after all.

You can see it is windy in this photograph taken at the Peasebrook destination. The Terram is rolled out, and you have to drop you load on it quickly, otherwise the wind catches it and rolls it sideways. The Terram has to be kicked out for 10yds further every time you arrive.

Today was the PWay department's Christmas lunch! A red mark on the calendar for this. How to give the event that extra 'twist'? It was decided to treat ourselves to a tour of the Broadway building site before the gastronomic event. Many people hadn't seen the size of the building now going up, or realised the extent of the track still to be laid. Yep, right through the station, in double track, and then on to Springfield Lane, there in the distance. By when, did you say? 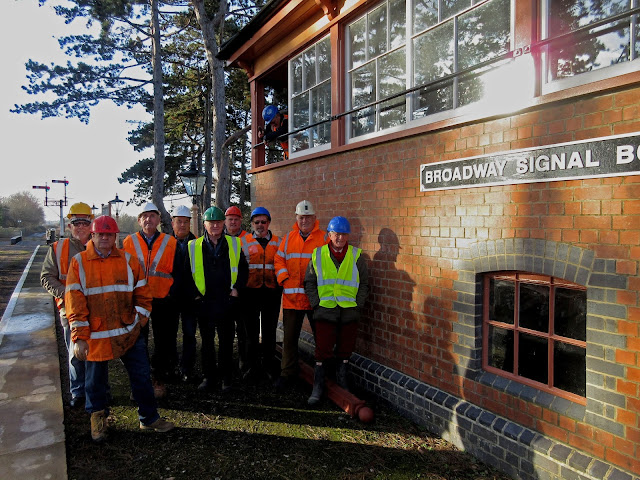 The members dribbled in rather slowly, so a start was made with just 10 when this group photograph was taken. More members then arrived, but missed the photographic boat. Never mind, time was pressing, the site is large and there was lots to tell.

The accuracy of the reproduction GWR signalbox was much admired, and the visit coincided with Graham and Mike, our Broadway paining team, de-snagging the box and making good use of the dry weather to paint the two gate posts and some of the recently planted lamp posts. 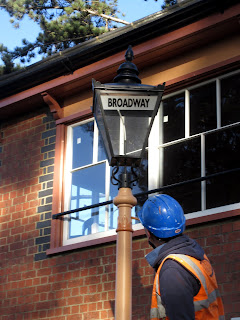 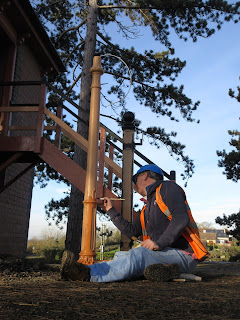 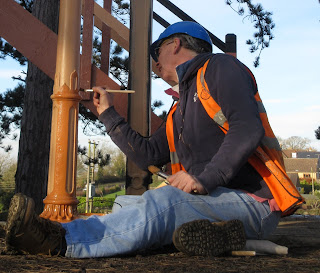 Note the detail work going on the GWR lamp post. Graham is highlighting the decorations in dark stone here, the sunken areas being in light stone. Fabulous! All our efforts and troubles to get the reproductions just right have paid off. This is a corner to be proud of.

Behind Graham is one of two original gate posts, recently planted to make a gateway to the signal box steps. Spearhead fencing will proceed left and right from here. A first panel has already been made to see how things go. Well, is the answer, so now it's just a question of time.