The jungle drums report progress on the slip repair, so time to take a look and see how it's going: 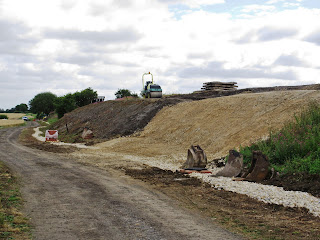 True enough, the slip is almost completely back filled. Only the top layer remains to be done. At the foot, the new drain runs from right to left, all along the foot of the embankment from Laverton bridge to the stream by the van in the rear. 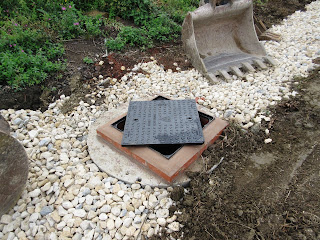 At intervals, the drain has been made accessible by means of new manholes, which have been neatly finished off with a course of bricks and a steel cover. We can report that there is water at the bottom of each of them. 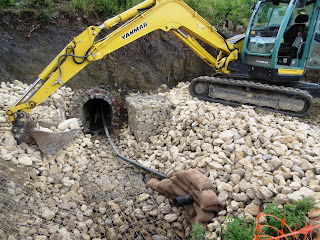 Work on the Malvern side culvert has resumed, following delivery of the gabions.

Here the mini digger has a bucket load of stones, which are being placed inside the gabions to the left and right of the mouth of the culvert. A concrete pad will be cast over the top, to replace the length of culvert that broke off.

The end of the new drain along the foot of the embankment protrudes from under some temporary sandbags on the right. 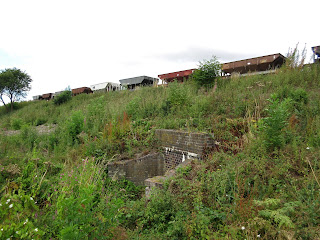 On the other, Cotswold side work has not yet started. This is a view of the entrance to the culvert. Looks OK from a distance, but... 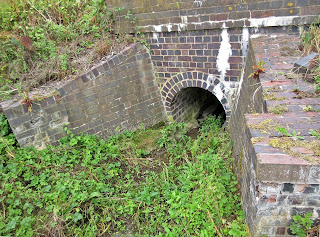 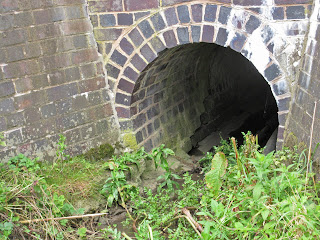 ... if you are willing to get your feet wet you can look inside and see how this end too has broken free. There is a big crack inside, where the end brickwork is rotating downwards. This appears to be a block including the wing walls, as the pointing outside is still intact.


While the Malvern side is easily accessible via a track running along the bottom of the embankment, this side is not. There is only a public footpath. The plan is to access the culvert via a temporary ramp from the top. 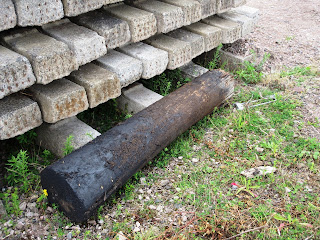 Topside is the bottom of a pretty substantial telegraph pole, which the contractors came across during the slip repair. All our lineside poles were cut down years ago, and it is striking to see how thick they were, and their good condition after all these years buried underground, thanks to a liberal dose o creosote. These poles were quite tall in places, for example at Broadway, where the lineside pole route ran along the top of the cutting in the station limits, and then along the bottom of the embankment in the 'car park' field, where the poles were particularly tall to compensate for the sudden change in the terrain. 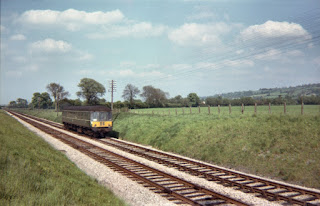 You can see the pole route on this picture behind the Leamington - Gloucester DMU. There were no fewer than 17 wires here. What a neat trackbed, and immaculate cutting sides. How did they get it so neat?

It's just a single car DMU. I guess these replaced the old GWR ones that also ran along here.

Picture taken by Brian Parsons in 1966, near Springfield Lane, Broadway. Thanks, Brian ! 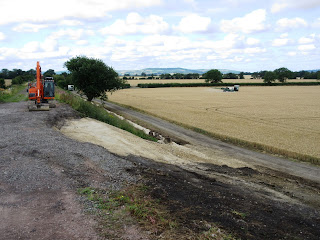 Back to 2015. In this view we can see the slip repair from the top. It is almost completely filled in again, except for the top layer, still to go and due to be completed within days. Then we can put the three track panels back in, and go for a further stock of concrete sleepers with which to resume track laying. 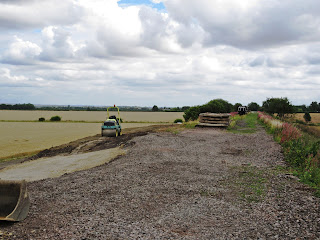 Looking the other way we can see the top of the slip repair, the sleepers from the removed track panels, the isolated Pway train, and in the far distance, the new ballast bed with the first 100yds of new track on it. 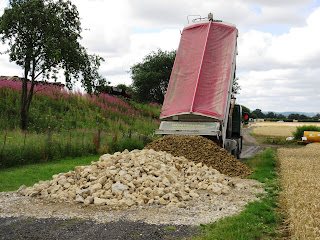 On the Malvern side again, piles of stone are being assembled. Nearest is the pile of larger stone for the culvert gabions, and behind it and newly delivered is a pile of ballast sized stone for the last layer on the slip repair.
The driver of the lorry knew us well.... Broadway Bridge, Chicken Curve, Laverton ..... we are clearly investing heavily in infrastructure repair, a good thing. 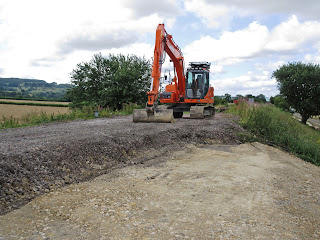 This is where the final layer of stone is going, next to the existing, older layer of track ballast.