Down in the jungle

At last the heat receded today, to be replaced by a dribble and a refreshing hint of a breeze. The small gang, three contractors and a volunteer, continued with levelling, and made a forage into the (further) Broadway extension. 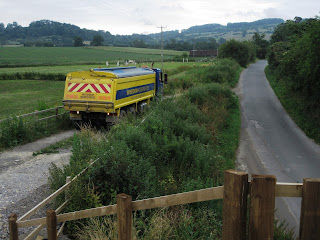 Today the lorries bringing in the ballast arrived during the day, so we can now see how they did this. They bring in 20T at a time, the source being Clearwell in the Forest of Dean. 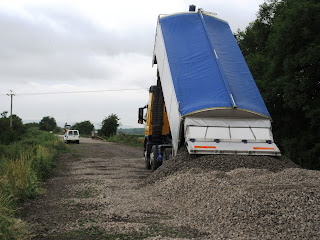 You can see form the small pile that remains that we almost got through the deliveries yesterday, by covering the last stretch of Terram, and adding 6T here and there where various low spots were identified after initial levelling. 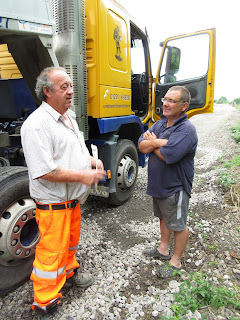 The drivers took quite an interest in our project - not being from around here -  and several stopped for a few moments after their long trip for a chat.

It was lovely to hear a new accent, this driver being from the village of Clearwell itself. Forest of Dean talk meets Gloucestershire burr. Arrrrrrr.

A few then carried on up to Naunton for a return load. Cotswold stone, while nearby, is of course completely unsuitable for our work, as it soon crumbles (viz my drive, after several skip lorries had been up and down it, the stone is now crushed to a  fine dust) 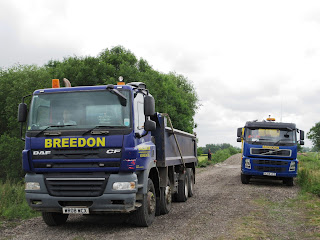 Whoa - things are starting to get a  bit crowded up here, as another lorry backed up the slope, not realising that the top was already occupied. But there is room to pass.
We still have several more loads to come, and are now stockpiling it on the Broadway side of the bridge, ready for top ballasting the track after it is laid. We saved quite a bit of money by getting the order in just prior to a rise in the price. 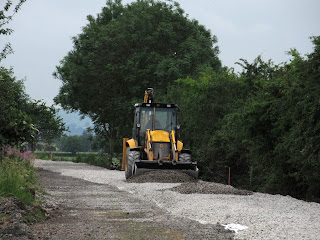 A couple of extra dumps were made in the curve, which Steve levelled out to make up to the required 8 inches.

Incidentally, the laser theodolite does not send out a single beam, but has a revolving laser source, so you can pick up the signal from anywhere around it, until you are out of sight round a curve. You then move the theodolite to the next point, and recalibrate. That is the time consuming bit. 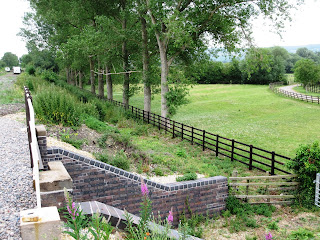 With the 4 of us on site, work was split into 2 activities today. A second work site was started up this morning just beyond Peasebrok Farm bridge (Bridge 4). Standing at the bridge, we noticed the beautiful new fencing put up by our contractors. This is of course our obligation, as a railway. Nice job though. 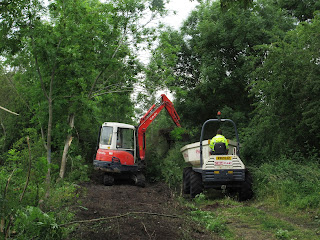 Beyond Peasebrook farm, no clearance work has as yet been started - until now.

Making good use of the hired in dumper, it was decided to move some piles of greenery that have been an eyesore along the trackbed for a number of years.

Tom and Adam are on the job here, and you can see from Tom's Hi Viz vest that it's been raining. 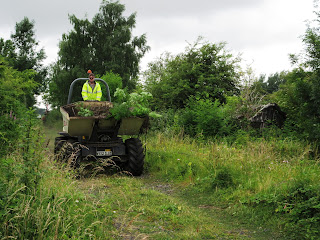 This is an abandoned railway track in its purest form. Are we really going to be running trains along here in 3 years time? Just watch us !
Note the ruined platelayers' hut on the right. 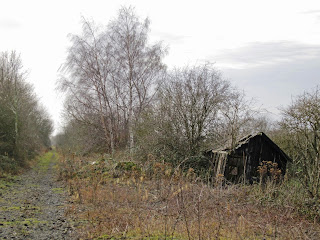 Just for interest, here is a picture of the same site, taken 2 years ago. That hut's been abandoned for a very long time, there is a tree growing out of it through the roof. More trackside pictures on my Flickr site here:
https://www.flickr.com/photos/73536293@N02/sets/ 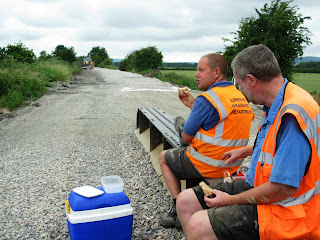 At lunch time, we had pleasant company to visit - the drainage gang, consisting of Andy and Alasdair. They were well equipped, with sand, cement, a genny, wheelbarrow, and - a picnic box. First things first, here. Bridge 5 makes a handy support for a lunchtime rest, the gang having already worked at another site in the morning. 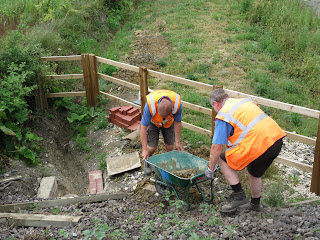 Today's job was to complete the cross drain exit (it brings water run off from one side of the track to the other, following a gentle slope, and carefully avoiding the 6ft deep pit that is the road going under bridge 5)

Alasdair made a barrow of mortar, and then came a choice - walk it down the lorry approach road, under the bridge, back up the other side, and then along the field, or Geronimo, straight down the embankment?
It was 'Geronimo'.

The ditch mentioned in an earlier dispatch will be further dug out by Steve and the JCB, to ensure the water really does avoid the bridge and flow into a ditch a bit further along. 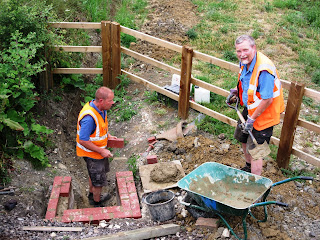 Andy seems surprised when Alasdair told him that the barrow was now empty of mortar. Have to make up another load then!

More digging tomorrow, and a further report should be available.