A quick look-in at Broadway today, to see the carpenter measuring up in the box, and then on to Laverton to see how the slip and culvert repair works are going. 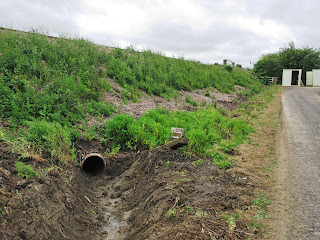 Quite a lot of attention is being paid to drainage. This pipe, the exit of which has been cleared, actually drains the bridge in the background. A proper ditch has been dug for it at the outlet, which should allow it to run clearly now. 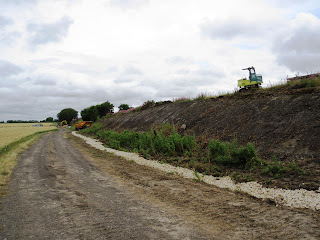 Turning through 180 degrees, the rest of the ditch is underground to stop it from filling up with debris from the embankment. It now leads all the way to the stream in the distance, where the culvert exits are being repaired. 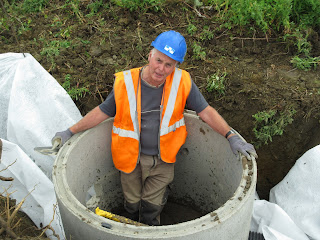 So that the underground pipe can be maintained in the future, manholes are being installed at intervals. Here Richard is bedding down fresh concrete that has just been poured into one of them. 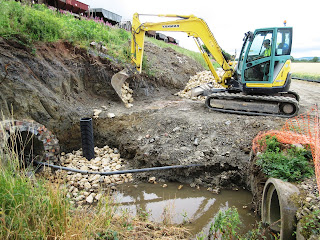 The Malvern side culvert exit has been cleared, and a start is being made on rebuilding it. Gabions will be placed here to strengthen the sides. While this work is done, the contractor needs to divert the water and to this purpose a sump has been installed - the vertical pipe in the back. Very neat.

A Broadway volunteer inspects the good remaining part of the culvert. Of the two pipes that pass through it, one is redundant and will be removed, the other is being used by the neighbouring farmer, who has been very helpful. 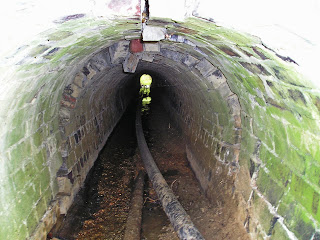 This is the view of the end of the culvert, before the damaged part was removed. You can see the shear point quite clearly. This has now been dug away (see previous pictures) up to the point where the brick is hanging down. 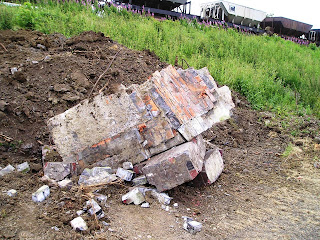 Last week, the remains of the broken end were still on site, but have since been removed. Good, solid GWR brickwork; shame about the foundations though. 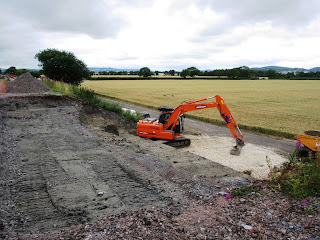 On the site of the slip, as start has been made on back filling the bottom with good material. The digger has paused for a moment while the next lorry is awaited. Next week should see a lot of this hole filled again, so here's hoping we can put the track back again soon.
The still useable material from the top (old ballast) has been stored topside, visible in the piles at the back. It looks to be about 2ft deep, before the embankment fill becomes the original clay. 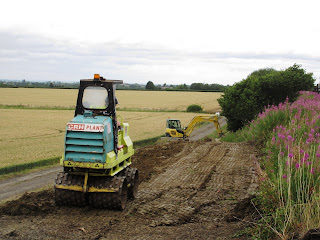 The other excavated material is being stored here, on top of a pre-existing shelf, and compacted. 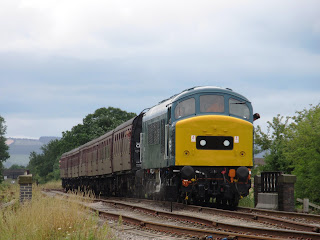 An interesting diversion then appeared, as we waited (fruitlessly) for the arrival of the lorries with stone, in the form of 45 149 with a driver training special. This is an impressive machine, with a handsome train and a very 'BR' look to it. 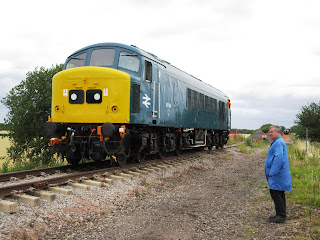 It trundled past and screeched to a stop by the Pway stop board. How many axles in this bogie? Four ??? Never seen that before..... with a weight of 135 tons, this would give an axle loading of only 16.9 tons, which is quite low. As the outer axle is mobile, this would be a 1 Co Co 1.
Interesting.

We'll take another look in a week's time, with more progress to show for you.