Tomorrow being announced as very wet, we had a quick look today, and with the help of our bridges engineer, here is an update of the slip and culvert repair works at Laverton. 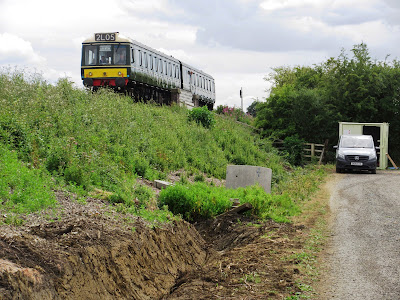 Just to show how close we are to the present end of the line, here is a picture of the regular DMU service, which has ventured to the far end of the Laverton loop to have a peek at the works, and us at them!

In the foreground is the start of the ditch which will run at the foot of the embankment, not only to drain the lower edge of it, but to take away the floodwater that runs under the road bridge on which the DMU is standing. 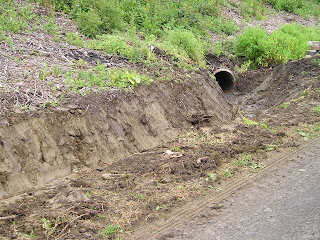 Already shown earlier, here is a reminder of what the end of the existing pipe looks like. The contractors have cleared it out as far as they can reach (i.e. not very far) so we had a look inside: 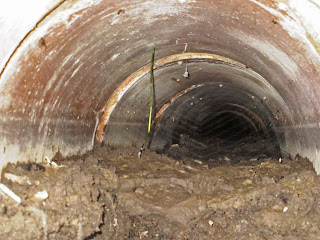 The pipe is pretty much silted up, no doubt because the water could not easily clear once it got to the end. This is now being addressed with a new, deeper ditch, with a drain at the bottom and regular inspection pits. 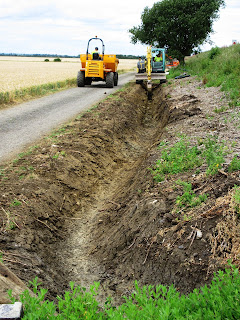 Looking the other way from the mouth of the old drain, you can see the contractors digging the new, deeper ditch up to the next inspection pit, just behind the digger.

Because of some material shortages earlier this week,the contractors have concentrated on this ditch. With the rain forecast for tomorrow, we hope they can get it completed before then. Some water in the foreground has already tested the levels, and it seems to be working. 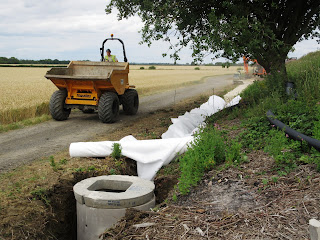 Most of the new drain is actually already in - here is a picture taken beyond the digger, with the dumper coming up for a new load. The pipe in the ditch is wrapped in Terram, and then the ditch is back filled with stone, which also helps to take the water away. In the distance it is complete, needed as the slip works are just next to it. 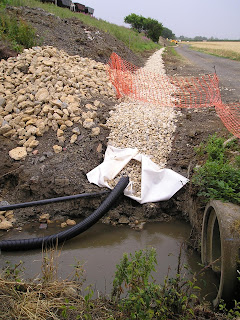 This is the other, northern end of the new drain, where it empties into the stream that crosses under the embankment in the culvert that is under repair.

Very little work has been possible on the culvert, as the contractor is waiting for the gabions - they have now arrived. Stone with which to fill them is in the background. 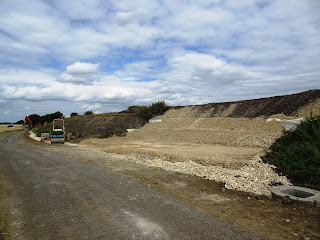 Our last view is of the slip repair. The steps have been covered in fresh stone, over a permeable membrane. The stone starts at a level 500mm below the level of the adjacent access road. In the foreground is the completed part of the new drain, with an access pit on the right. The stone is consolidated with the roller on the left. More stone is awaited to finish this job, possibly at the end of next week (depending on weather and stone deliveries). Progress so far looks good.
Posted by Jo at 16:30