With the excellent weather (for working) we have had recently, the contractor has been able to scoot ahead and the slip and culvert repairs are almost completed. 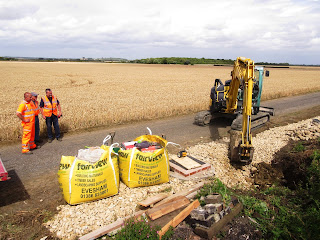 The first thing to notice today was that there were two gangs at work, the contractor and the drainage gang. Here Andy P and Co are further digging out the end of the pipe discovered coming out from under the embank, now thought to originate from the corner of the field on the other side of the line. 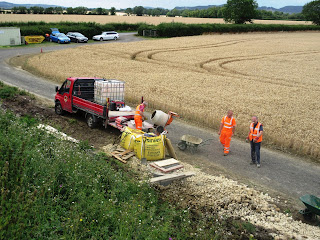 You have to admire the drainage gang, they are so well organised. All their gear has to be transported to wherever it is needed, sometimes at the most remote locations where there is neither power nor water.

Here you can see them with a container of water on the truck, a concrete mixer, a dumpy bag of cement and one of aggregate, and a wheelbarrow. Ready to rock and roll ! Just out of sight a comfortable chair was parked, ready for lunch.

The hilarity was caused by the photographer being spotted atop the embankment - come down here and do some work ! Sorry, day on the cushions today, back at work at Broadway most days next week. 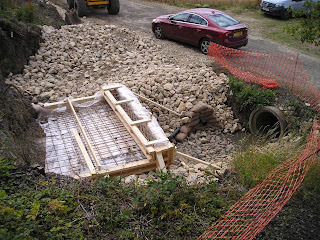 Earlier in the week shuttering was assembled around the mouth of the Malvern side culvert. Today, Wednesday, the concrete had been poured and was going off. It just needs a few more adjustments to finish off this job. 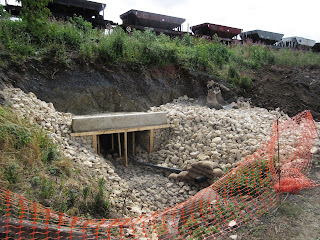 This picture shows the Malvern side culvert mouth, with its new concrete cap. 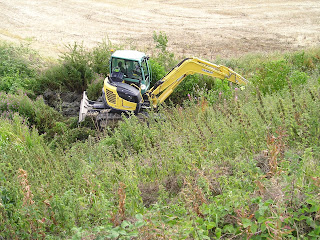 Earlier in the week work also started on the Cotswold side of the culvert. The mini digger here has adventured down the slope and is digging out the ditch at the foot of the embankment leading into the culvert. 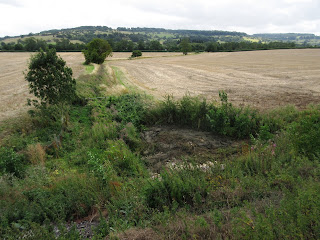 This view shows the scene afterwards, with the ditch leading off in the direction of Laverton. 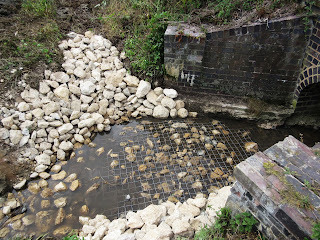 On the Malvern side the damage to the mouth of the culvert was fairly serious (the mouth having broken off completely) but on the Cotswolds side the damage is bearable, with the wing walls still intact. The break inside the mouth of the culvert can be repaired for now. Outside, gabion matting has been laid down and covered with stone in order to prevent further scouring under the tunnel mouth, and so to give it a further life.

More work is due here, but progress is such now that the contractor may be off site as early as next Wednesday. 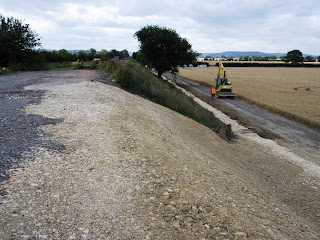 A final look at the slip repair, which is now complete. What a nice neat job they have done. All is ready for relaying the three panels of track.

A last job here is to spray the repair with grass seed, earmarked for Tuesday next.

Today was a day of tourism with a Dutch visitor. After patronising the Flag & Whistle extensively, we enjoyed the opportunities offered by the red timetable with two steam locos and a diesel rail car to stand at Hayles and Southam bridges for some pictures. 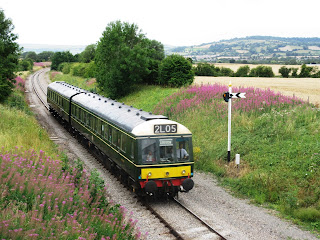 A classic shot of the DMU, but what's this - they are recruiting for the second man very early these days... 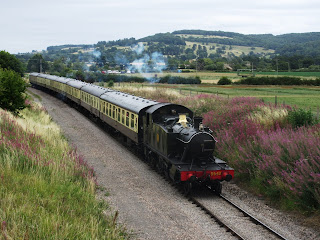 Hayles Abbey halt, with the site of the old halt on the right. A repeat of the classic B & W shot years ago. 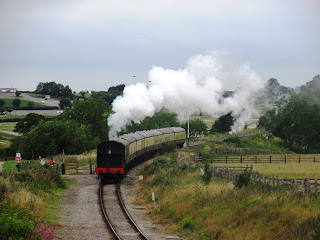 A departing train from CRC hauled by 5542. 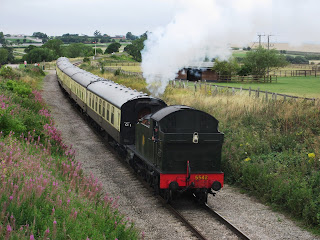 Southam bridge, the site of the spectacular accident with the car that fell on the track in the foreground.

We'll keep you posted as soon as there is more extension news.
Posted by Jo at 18:00