Three of us again; we are back to full strength. Unlike Wednesday it was a relatively dry day and we achieved big strides in moving the painting of the roof sheets forward.

Each sheet needs no fewer than eight coats of paint: primer, undercoat, a second undercoat, and a topcoat. Then the same on the other side. So you need to do a lot of painting, and waiting for it to dry, and in between you have a storage issue. 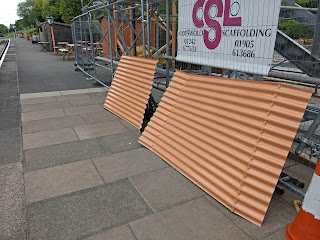 But Friday we at last had one set of sheets ready to go, with all their coats on too.

This was the set of three that has been bent to shape, which goes on the intermediate landing. 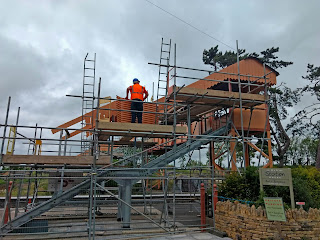 Neal climbed up on the scaffolding with the first sheet, and laid it on the frame to see if it fitted OK. 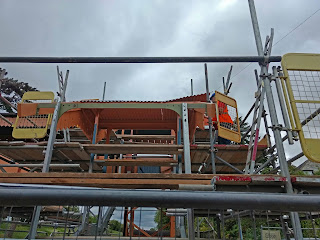 Here he is with the third sheet, on the P1 intermediate landing.

Today was the first time it seemed a bit darker under the steps. 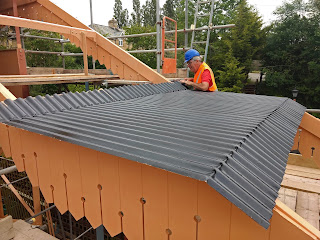 We fitted all three sheets, then spent some time pushing them this way and that to make sure they were properly centred. 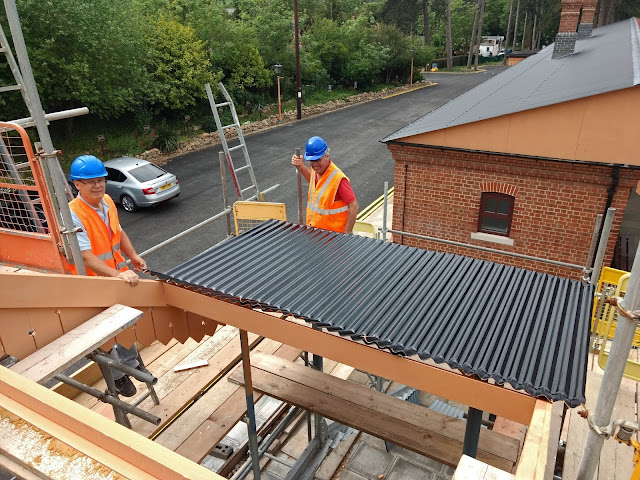 Here is the proud team of three (well, one behind the camera) with three folded sheets in their appropriate place.

May there be many more. 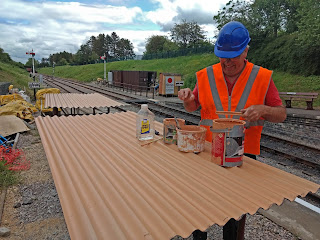 Well, if you want many more, they need to be painted first.

We had a bunch of them out on P2, painted Wednesday and Friday last.

Neal announced that today was topcoat day for the big sheets, so that is what he is mixing here.


Two of us spent the the rest of the day, undercoating and top coating the big, straight sheets for the angled areas of the steps.

An instruction was to ensure that the sheets were the right way round. There is an up-side, and a down-side. Also, some sheets were longer than others.

On picking the next set, still in primer, to undercoat, we noticed that the wave pattern of the corrugations seemed different. We consulted Neal. Neal came and laid one sheet on top of another.

This determined that the sheets were cut different ways, which surprised us. The corrugations on one side started at a different point in their cycle. Not only that, over the width of the sheets, the corrugations slowly went out of alignment, when comparing different sets of sheets. 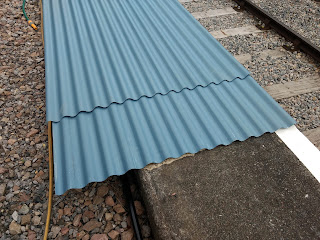 You need to know that we did not specially buy the sheets for the footbridge steps, they were left over from an erroneous purchase for the main canopy for which they had been purchased too short and too thin. Luckily this was noticed in time, but meant extra expense as the sheets had to be re-ordered in a thicker gauge, and longer as well.

For the steps it was felt we could use the thinner sheets that were now redundant. The roof of the steps had a smaller span than the canopy, and was also unlikely to be walked over.

We decided to sort the sheets out according to their different sizes/patterns, and to concentrate the painting on one type. 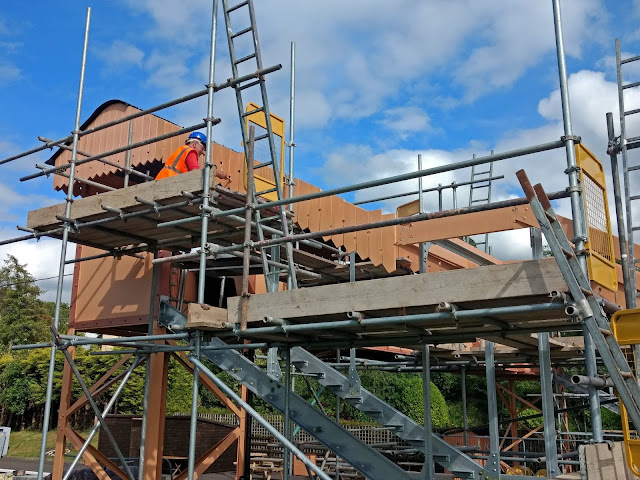 Having decided on the type we would paint, two of us got on with that, while Neal vanished way down the platform, but on top of the scaffolding.

Hammering could be heard all afternoon.

This was the result near the end of the day: Neal had attached a whole row of dagger boards, which now reach down to the intermediate landing. Just the landing and the bottom end to go, and that's it. Or them.

Ten of us today, a good crew, and a nice sunny day forecast too. 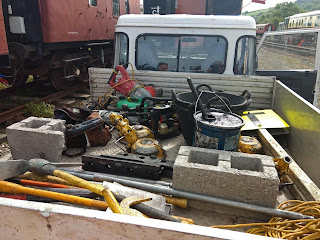 First, load up your Landie. It's incredible how much stuff you need to take, just in case. More stuff was on the blue one behind the camera. 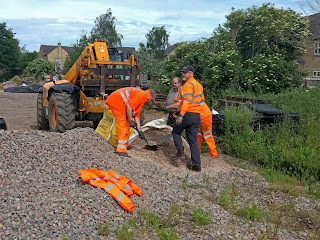 Then all hands on deck, or in this case, to the dumpy bag. It needed filling with fine ballast with which we could Kango the dips at Didbrook. 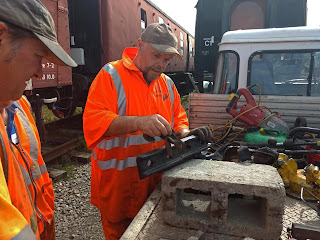 We had quite a few cracked fishplates left over from the previous working day, except this one, which looked suspiciously OK.

Dave and Bert Ferrule give it a very close inspection, but can't find any damage. And yet it was painted yellow. Odd, that. We put the duff ones on the scrap pile; this one will be recycled. 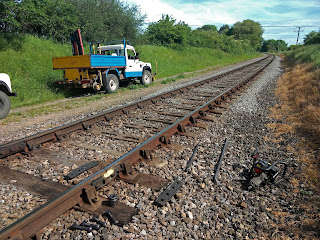 We repaired to just north of Hayles Abbey halt, where another cracked fishplate needed changing. It was a double break too. We laid out all the kit and stood back to await the first down train of the day. 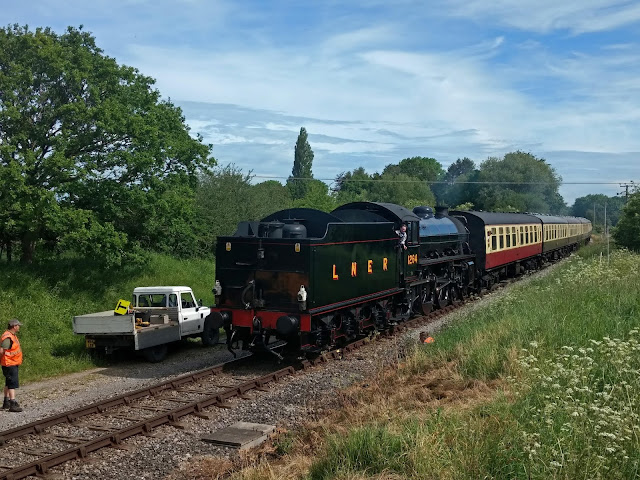 Oh joy, it was hauled by the B1, an engine everyone seems to like. It 'speaks' to you as it pulls away, we liked that.

In the foreground the remains of a small lineside fire, just north of the halt. 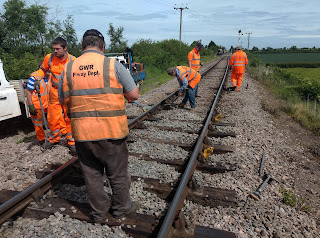 We then put up a TSR south of the Toddington station limits limit (if you know what we mean) and continued ironing out the unevenesses on which we worked last week as well. It means digging out between the sleepers, then jacking up by eye and packing with the Kango hammers. 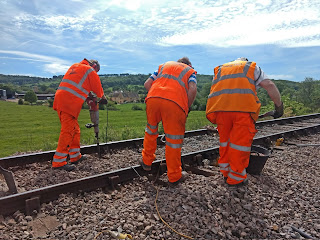 Bert Ferrule and Steve are on the Kangos here, supported by Mike with the small ballast, which he dropped bit by bit into the voids they were tamping. 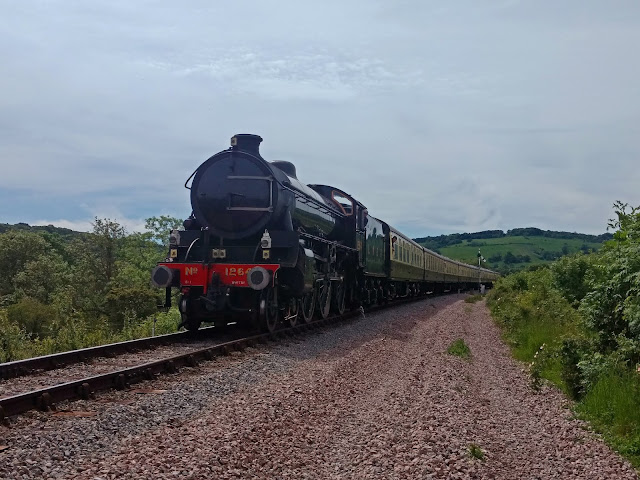 Eventually the B1 came back with the first train of the day from CRC. Here it is rounding the curve at Didbrook 1 bridge. 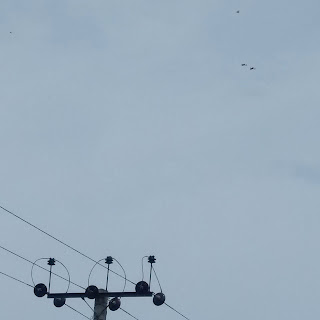 We also heard an unusual roar overhead, and thought to identify two Spitfires flying from East to West. Accompanied by a pigeon, which seemed just as fast thanks to the perspective. 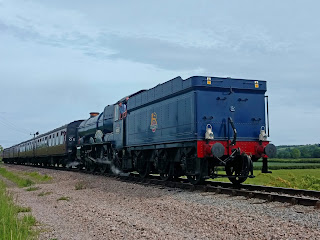 The blue King (Edward II that is) was the second steamer out, but a good picture of it proves elusive as it is coming at us here tender first. 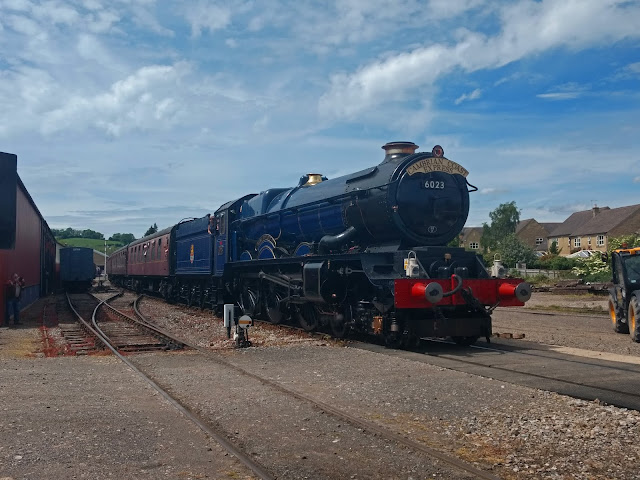 We got it at lunch time though - just waited for it to return from CRC, and bingo. Chimney first, at Winchcombe. A fine specimen it is too.

After lunch we moved along a few 100 yards, to the start of what we know as the Defford straight. It's named after the origin of the track panels laid there in the 1980s. 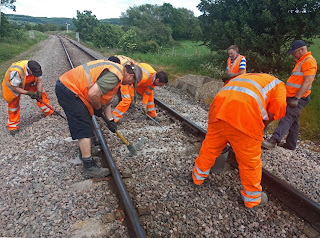 We're going to have a biggish packing session along this straight, where there is a large number of dropped joints.

To get the ball rolling for next week, when we will be doing this, we prepared the job by digging out the sleepers around any affected sites. This was hard work, and very hot. 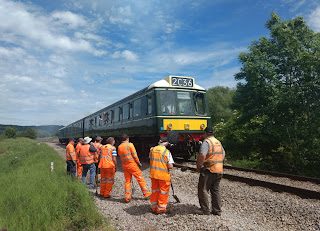 The passage of the DMU provided some welcome rest and relief from the non stop digging in consolidated ballast. 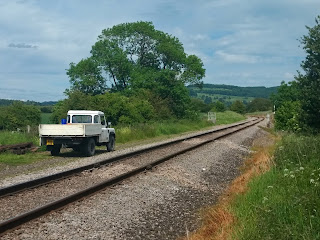 In this picture you can see from the lighter patches along the ballast  that we started at the end of the curve (start of the Defford straight) and have worked our way along.

In total we dug out 10 joints. This means that we have a head start for next week, when we intend to split into 3 teams (out of the 10 of us). One to carry on digging out the dropped joints, one to pack them with Kangos, and then a third to clean up behind the first two and fill the holes back in again.

See how well we did next week. 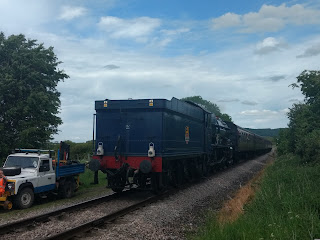 The last train we saw along the track was the King again, but true to form, it was tender first again. Is it doing that on purpose? A very shy locomotive it seems. 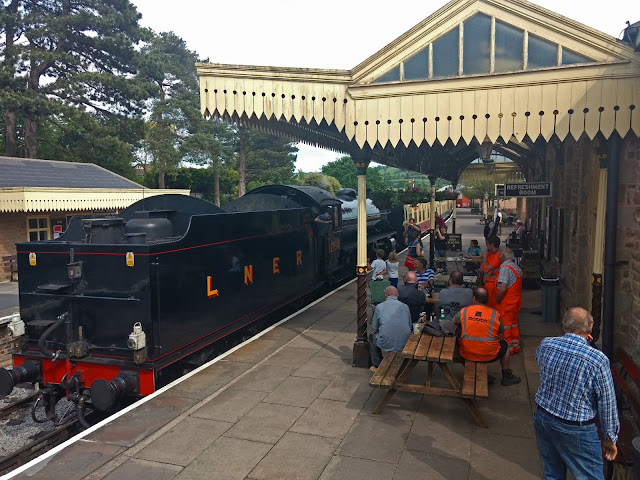 The number of people digging out sleepers in granite ballast slowly diminished, even as the number of watchers leaning on shovels increased. It was tiring.

Finally around 4 o clock we gave up and treated ourselves to a few beers in the Coffepot. Let's talk about which Donnington beer is best? And which is the source of our Rail Ale?

The B1 came past one last time, and this time we watched it sitting down, beer in hand.