A slow start on Friday, due to other commitments from 2 of us.

Also, exceptionally, regular service trains ran on Friday, as it was the start of the Steam and Real Ale weekend. 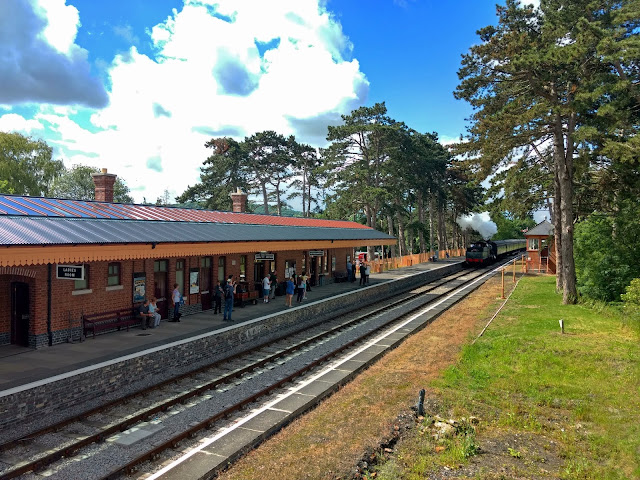 Broadway station - it's so good to see it in use, after 10 years of construction, there it is at last - was quite busy early on, with this crowd of thirsty passengers waiting for the first train south. Some were already in the cafe, before the train was even in sight. 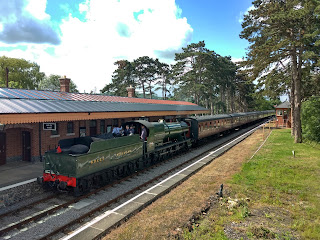 2807 pulled in the maroon set and there was jollity all round.

No sign of canopy gang volunteers yet, so a start was made on adding a second layer of bitumen to some of the sheets. 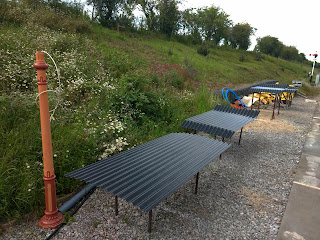 You peer at them intensely, and eventually judge that 'that one has some grey streaks from the primer, it could take another coat'. 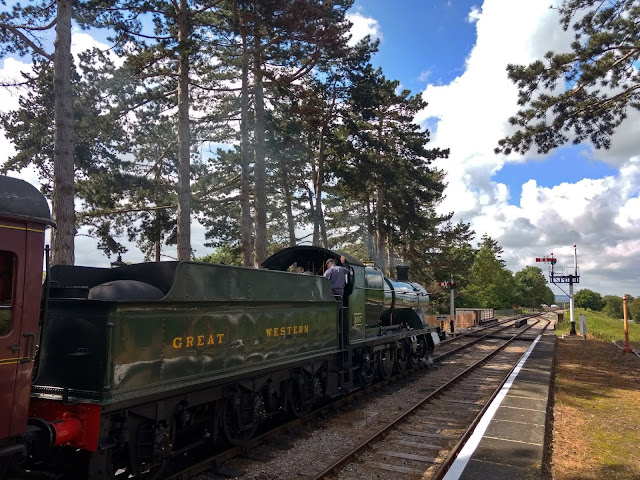 Meanwhile, 2807 ran round and positioned itself at the other end of the train, ready to go again. The place to be on Friday was Toddington or Winchcombe, as there was a DMU shuttle between the two so that you could enjoy the beer.

The light and shade, thanks to the sun and the Scots pines, is beautiful, and so typical for Broadway. They define the look there. 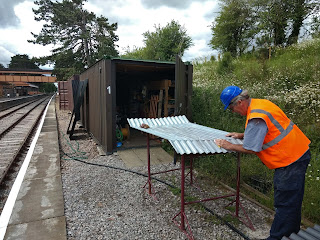 Eventually Neal arrived and sandpapered off the dirt and light rust from the 3 sheets that were bent into shape in the loco shed a few days ago.

This was followed by brushing on the bright blue T Wash, which enables you to primer something that is galvanised. 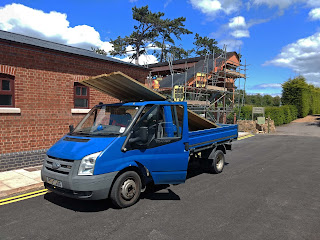 The T Wash takes 2 hours to go off, so we filled that time by collecting the blue Transit from Winchcombe and taking a supply of timbers to the C&W carpentry workshop.

Here we are, ready for the off. C&W have some sort of heavy duty router which will be used to turn these timbers into the mouldings that run down the steps along the tops of the dagger boards. 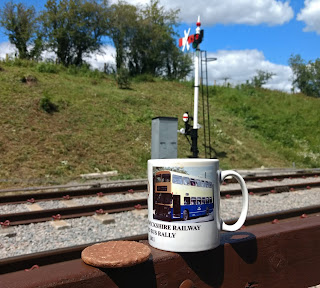 Meanwhile, back at the farm....

Sitting outside the Broadway mess hut in the sun, your feet up, a cup of coffee and a chocolate biscuit.


After lunch, back to work. More painting, black and sticky bitumen all day long really. 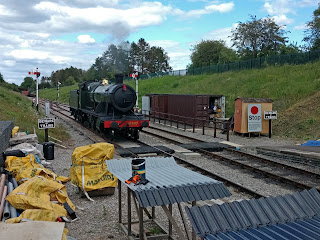 Occasionally a loco would steam by to break the monotony.

But at least the three bent panels for the P2 intermediate landing are now T washed, primered, and one side in bitumen. That stuff dries quick, we were able to turn the sheets round and do the other side on the same day. This was considerably helped by the dry weather we had today. 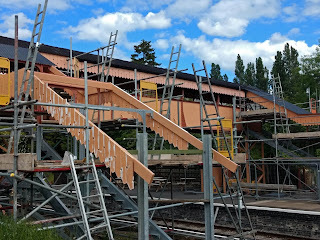 While all this furious bitumen painting was going on, Neal was placing more dagger boards.

As you can see, he has now reached the end of the fourth side, and has basically finished, hence the activity around the mouldings. A few more daggers remain to be placed at the two ends. Neal is having a think about what the very end ones will look like, given that they will meet the P2 canopy overhang, in its proper position, over on this side. 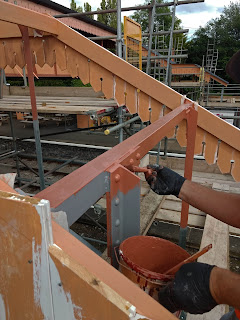 The third activity in the afternoon, thanks to John giving us a half day, was the painting in undercoat of the steel hoops on P2.

As they are structural supports they are being painted in dark stone.

There's quite a bit of that to be done, not only on the steps, but also inside the centre span. 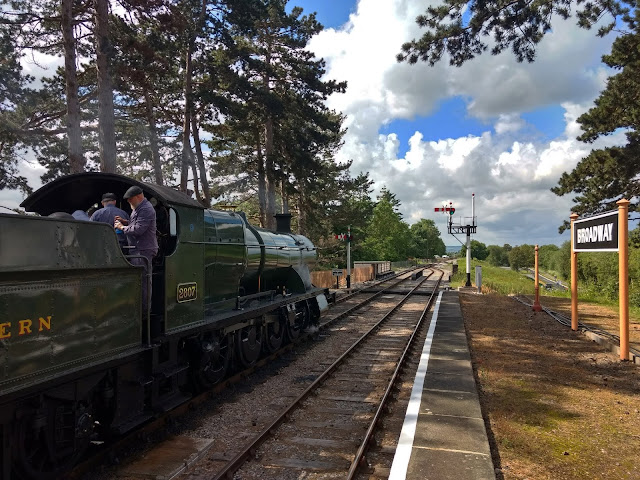 We'll finish Friday with this picture of 2807 waiting for the off, by the P2 signal box. What a glorious day. Lots of progress on the steps, and good business for the railway, as the trains were clearly popular.

You can join in too, the Steam and Real Ale event goes on for 3 days, and we are running the King! It won't be here for ever, so seize the chance.


Saturday out along the track

Just 5 of us this morning, an unusually low headcount. The blame is laid at the feet of the holidays. Things just aren't right when Jim, Paul and Nigel aren't here. No doughnuts and no cakes. Given the low turnout today, the planned work on the dipped joints on the Defford straight was cancelled, and we decided to replace some broken fishplates instead. That's useful work too. 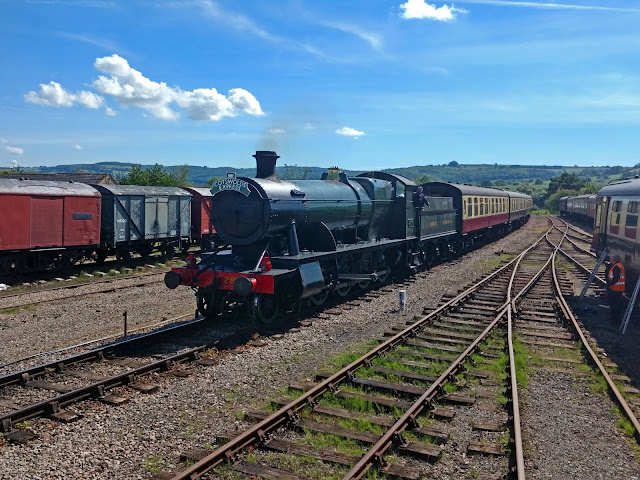 Much manoeuvering this morning, as it's Steam and Real Ale weekend. An early visitor was the class 26, which came to retrieve the third rake from the siding at Winchcombe. They were pulled into P2, whereupon 2807 rumbled in with the second rake.

This had two trains at Winchcombe, both facing south! An unusual combination. 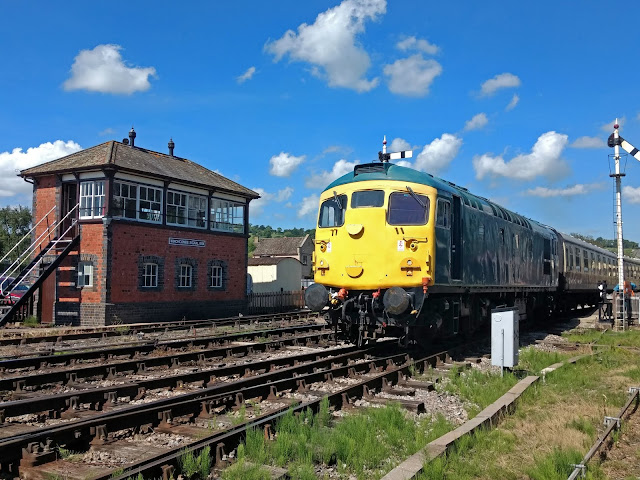 Once 2807 had continued on to CRC, the diesel ran round and took its coaches to Toddington. Peace in the yard resumed.

The two broken fishplates were opposite the signal box at Winchcombe, and south of Bishops Cleeve.

Before starting work, we thought it a good idea to check the Landies for engine oil.

Both were grateful for a top up, which Dave provided expertly. After all, how many of us have a bottle of 15-40 with us, just like that? 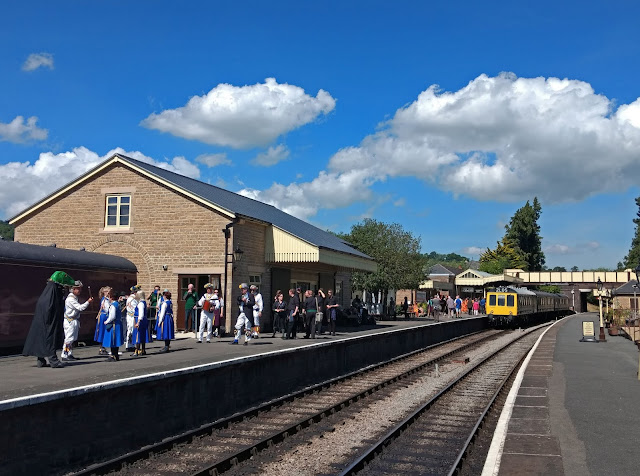 We got the gear out for changing the Winchcombe fishplate, then had to wait until the line was clear before doing anything. Why wasn't it clear yet? Steam and Real Ale of course! The DMU, the fourth (!) train running today shuttled up and down between Toddington and the beer at Winchcombe.

There were also three groups of Morris dancers. The nearest, from the Ashford, Kent, area, even had a dancing crocodile. In between, bars, beer tents, barbequeues, and of course - trains. Lots of people were picnicking on the grass, in the shade of the trees. 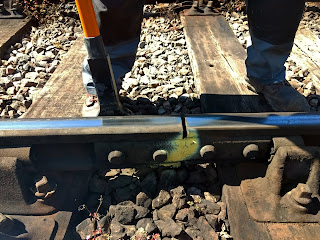 Eventually we got the OK from the signalman and we replaced this fishplate, very clearly cracked right through. 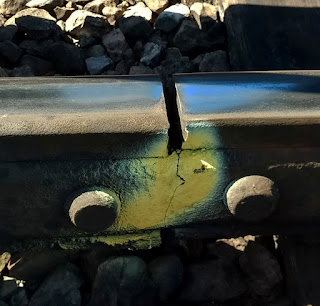 This is the crack - the plate is hanging on by the skin of its teeth. All fixed now though. 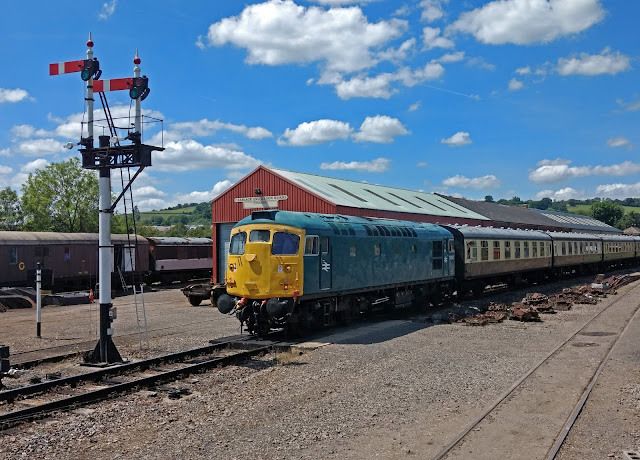 Before moving on to Bishop's Cleeve, here is another shot of the class 26 heading north out of Winchcombe. So, out to day were 2807, KEII, the class 26 and the DMU. 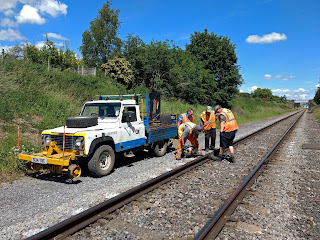 Then a long meandering drive through Greet, Gretton, Gotherington, Bishops Cleeve, on to the trackbed and then 12 joints down the line further south.

And there it was, another cracked one, and clearly marked for us. Handy.
We had some spares with us, but needed to make quite sure that what we were putting back in was really what was required.

The bolts were no problem, so the plate went on PDQ and then we gave the possession back to the signalman.

By now it was 1 o'clock and by common consent we decided to call it a day, being a low turnout, and very hot. 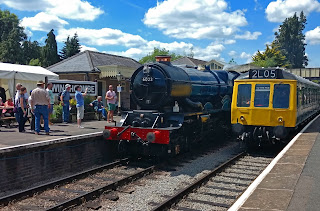 We returned the vehicles to Winchcombe, put all the gear back, had lunch and then boarded a DMU shuttle, ostensibly to see what the track was like between Winchcombe and Toddington. 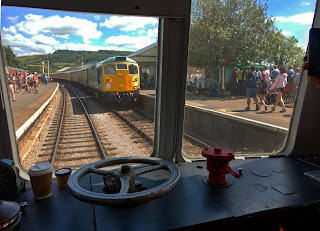 Strangely, Bert Ferrule's keenness to study the track earned him a cab ride in the DMU. Those of us on the bench seats further back reckoned you could have seen just as well sitting with us, but any excuse....

Well, the return trip did identify a kink in the track at Didbrook, one that seems to return. That'll be for another day then. 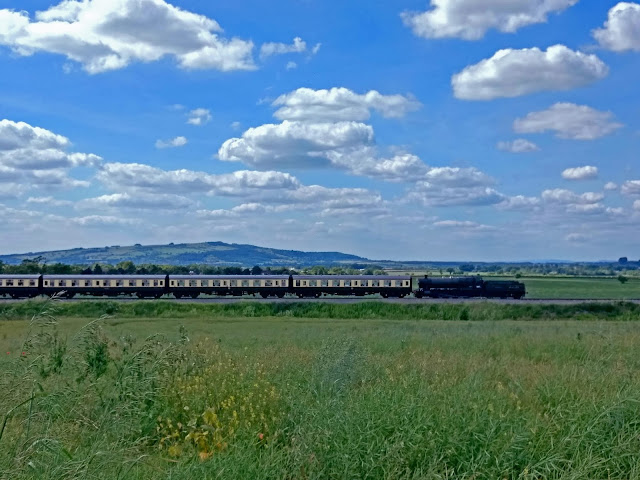 Our last picture is of 2807 on the Broadway extension, heading north. We saw a comment in the Broadway visitors' book that the line was 'bucolic'.

That about sums it up, doesn't it?