As you probably all know, it absolutely tipped down on Friday. We had one absentee - a hospital appointment is no excuse when we are building something as important as this - and the two that turned up for work had to resort to heavy duty rainwear and an extended tea session in the cabin, until there was a slight reduction in the downpour. But not a cessation of course. 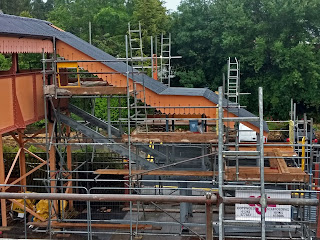 First, a quick look at the P1 roof.

The corrugated iron sheets, painted with 4 coats of paint, now go all the way down.

Strangely, it seemed to us, there was no curtain of water at the bottom. We don't know where all the water in the corrugations went. 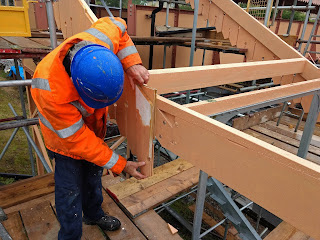 As we couldn't paint, nor use electrical equipment such as drills to fix further sheets, we decided to manufacture more dagger boards in the dry.

Here is Neal taking a pattern off an existing board. We still have the intermediate landing and lower half of P2 to equip. 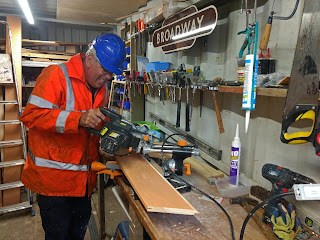 We then retired to the workshop to cut out the basic shapes of the 25 or so we still need.

It's dry in here too.

A supply of painted T&G board was readied earlier and is in storage for this very moment. 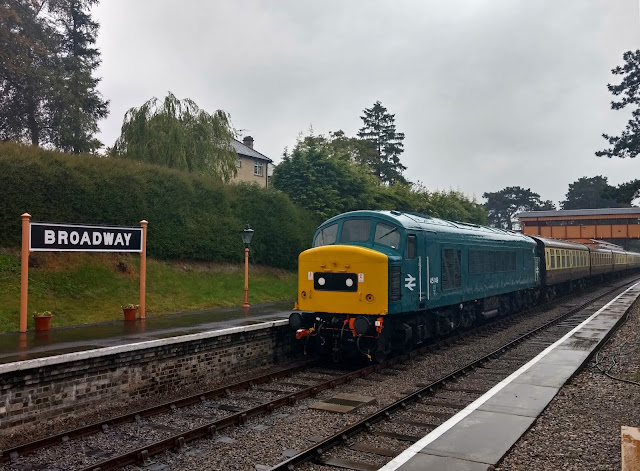 In between cuts with the chopsaw we thought we could hear a bit of a rumble. Thunder, or a low Hercules perhaps.

We peeked out of the door and found the source moving towards us - the Peak. It was a fire and drive course, without the 'fire' bit. 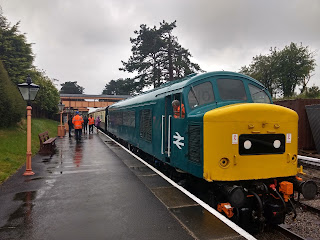 Given the very wet conditions, we could imagine that driving say 2807 with its open cab and scant side protection might not be as popular as a seat in a diesel, with its cab warming and pneumatic windscreen wipers whizzing. 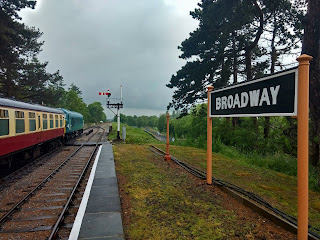 The class 45 ran round and coupled up at the Toddington end. The positioning of the rake wasn't brilliant. A bit like a married couple's blanket, there was plenty of room at one end and very little on the other. The Peak ended up straddled across the barrow crossing. Oh well, these are driving lessons, after all. 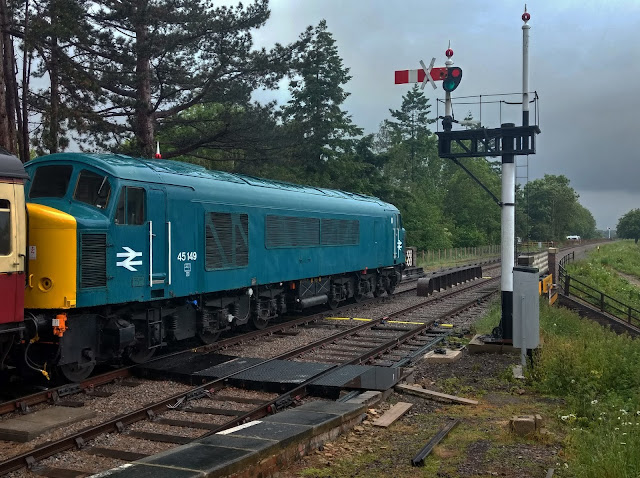 The departure was a bit of a non event, so a video of it was started but soon deleted again. No roar, no splutter, no 'Tractor' type growl. Just a slow forward progression until all you heard was the click of the carriage wheels on the joints.

The enormous length of this monster is very striking though, so for the still photographer it is clearly attractive. 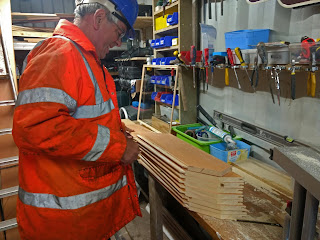 After a welcome lunch in the dry in the mess hut, we renewed our sawing activities, until Neal had made up two nice big piles of dagger boards.
These were squirrelled away in his van, for further treatment at home (cutting the slot and drilling the holes, then primering the sawn edges.)

After that, we called it a day. A wet day. 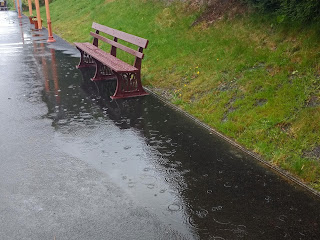 There was so much standing water on the platform that two of the benches ended up with their wooden feet in a big pool. Perhaps they can be moved along a bit, where there is a drier area?

Saturday on the Defford straight.

The rainy Friday eventually dried out, but as the sun set a very menacing looking cloud began to surge over the Cotswolds edge: 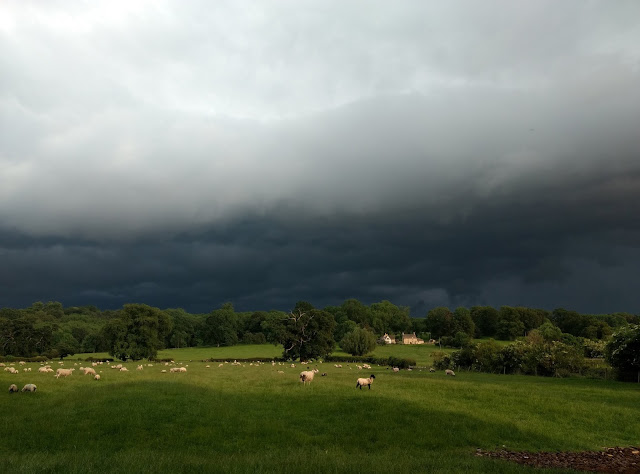 Quite a striking weather phenomenon, isn't it? It bode no good for Saturday morning, and it did indeed rain hard all night.

Major puddles everywhere first thing on Saturday. But with a stroke of luck it didn't affect us too badly, as Saturday was the day of our bi-annual personal track safety exam, so we stayed in the mess room and studied. 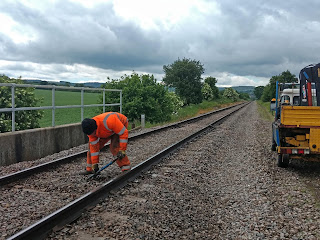 Amazingly, just as we completed the exams, the sky slowly cleared and we set off for the Defford straight in the two Landies with the genny and tools.

The Defford straight is the long stretch between Hayles Abbey Halt and Chicken Curve, in the far distance in this picture.


The same bridge appears in this 1986 picture, now looking back towards Hayles Abbey Halt. 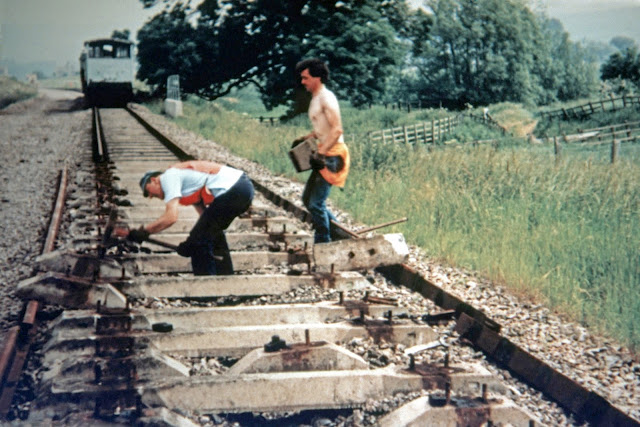 Back in 1986 when we laid the first track here, we used lightweight rail on economy sleepers, which were interspersed with concrete pots. It gave us several hundred yards of newly laid track, but on advice it was removed again as it really was too lightweight.

The track from Defford, hence the name, was replaced with standard FB on SHC type concrete sleepers. In the old picture you can see the pots being removed and the bolts extracted. In this condition they were used on the new Winchcombe platforms instead of corbelling bricks.

The replacement track is the one we were working on today. It's pretty good, but suffers from dipped joints along part of it. 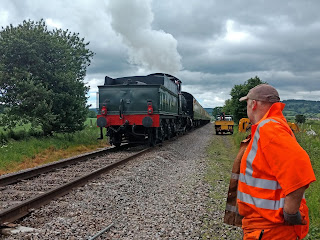 Last week we dug out several of the joints already, so today we had a flying start. When not interrupted by passing trains, such as 2807 here. 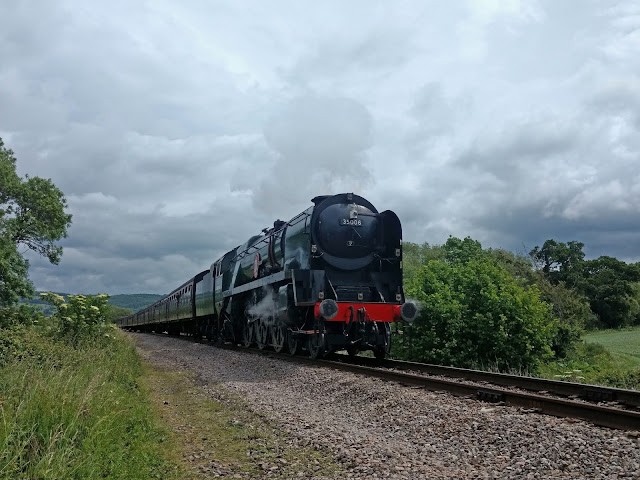 Back from Toddington came 35006, a few moments later. At this spot the timetable gives us two trains close together, followed by a longer interval without any. 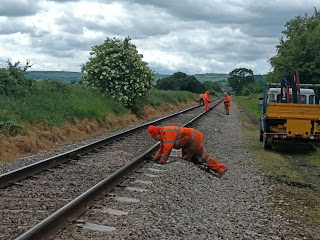 Ahead of us a series of dipped joints then. The section improves beyond the tree in the distance.

We divided the 8 volunteers into two groups. One on the Kango hammers and back filling, the others further ahead digging out the next cribs.

Its a bit hard to see, but there are several dips along this bit, our work to come. 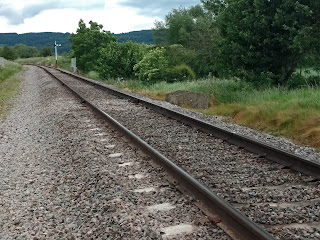 On the other hand behind us the rails are nice and level, as this is how they should look.

This is the work we have already done.

We hope somebody notices. Well, we know, anyway.


Slowly we moved down the line, here in almost exactly the same spot as the 1986 picture, and looking the same way towards Hayles.

33 years separate the pictures. It boggles the mind to think about that. 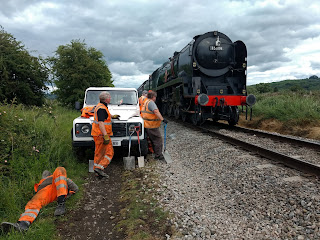 35006 P&O trundled by mid afternoon, by which time some of us were getting tired.

Surely not that tired, Ade? Well, he has a full time job as well you know. 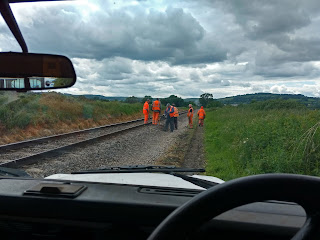 We had to move the Landies up 60ft every time we moved to a new joint.

The next one is the subject of some debate. 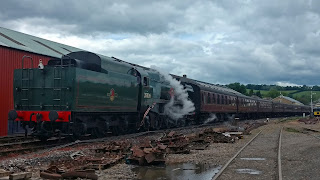 We came home to put away the tools towards the end of the afternoon, tired but pleased with what we had achieved.

35006 said goodbye to us, under a cloud of spare steam as she left Winchcombe with a train north.

See you again next week!