Gala day, for some.

This was the first of our three gala days, and there was a spirit of excitement around the car park at Winchcombe.

The Caley tank came in first. For technical reasons there was a last minute change of plan, and instead of pulling the rake of 5 coaches the blue tank engine busied itself with a short freight train, right outside the mess coach: 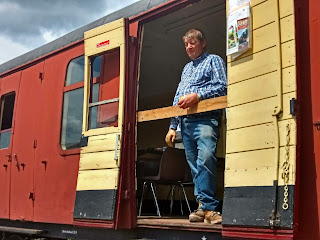 We had a grandstand view (or at least Jim had, we were loading tools below) of the freight shuttle on the other side of the yard. 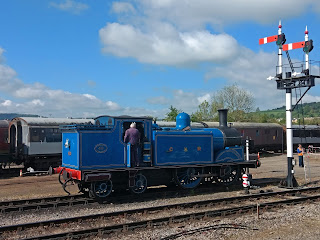 No. 419 collected its little rake of goods wagons, and pulled them up and down between the platforms and the C&W yard, in between the big boys with their 8 coach passenger trains. 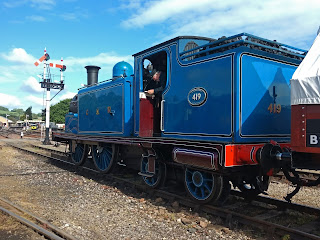 Here the blue tank loco is waiting for the two passenger trains to cross at Winchcombe, with the train from Toddington already 'pegged'. 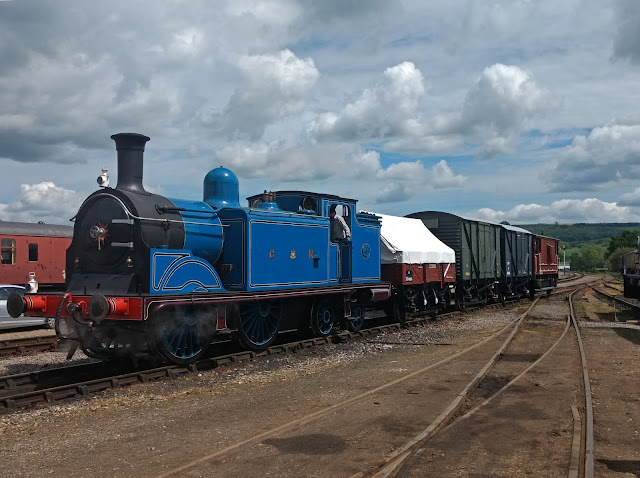 This is what our visitors could see, from a roped off area outside the C&W shed, which gave an excellent view of the proceedings in both directions. There was a bench to sit on, even a parasol. 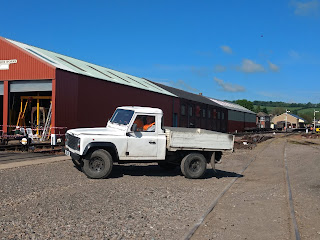 We on the other hand loaded up the two Landies. This one is off to Gretton to change a cracked fishplate, while the blue one was destined for Didbrook to continue various improvements to the line there, started several Saturdays ago now. 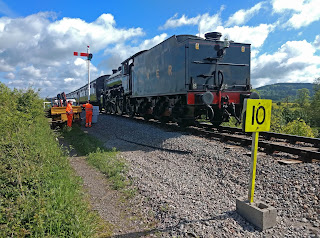 We set up our TSR to cover the working area today, and almost immediately the LNER B1 came rumbling by.  With our 10mph speed restriction there wasn't much point in capturing any video of it, but if you want to see what it sounds like, we took a video of it last summer while on a PWay jolly to Grosmont:

And now to work. For various reasons there are some uneven stretches at Didbrook, with some areas high and others low. 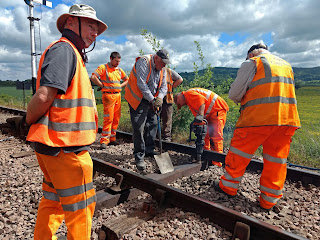 This sleeper was in the middle of a bump, so we dug it out, removed it, lowered its bed, and re-inserted it.

On the other hand, this area was too low: 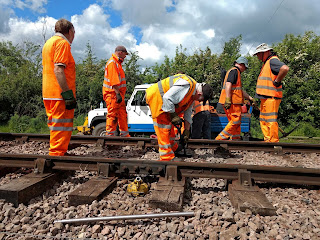 ... and here we jacked up this dropped joint and packed it back to level. 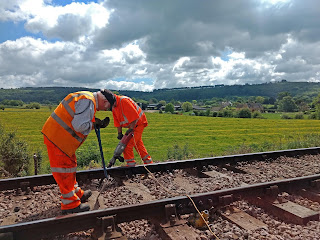 The dropped joint was packed with Kangos, and with this low area raised, and the high area lowered, we had our track level again. Result !

Mike and Bert Ferrule seem oblivious to the beautiful Cotswolds countryside behind them. 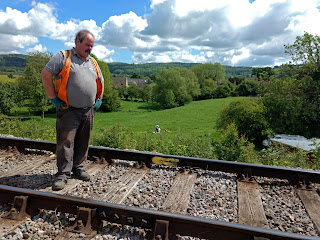 Job done, we moved on to deal with a cracked fishplate. Below us, along the footpath which runs alongside the line, people were picnicking and catching an occasional photograph of a passing Gala loco. It's a lovely way to spend a sunny day. 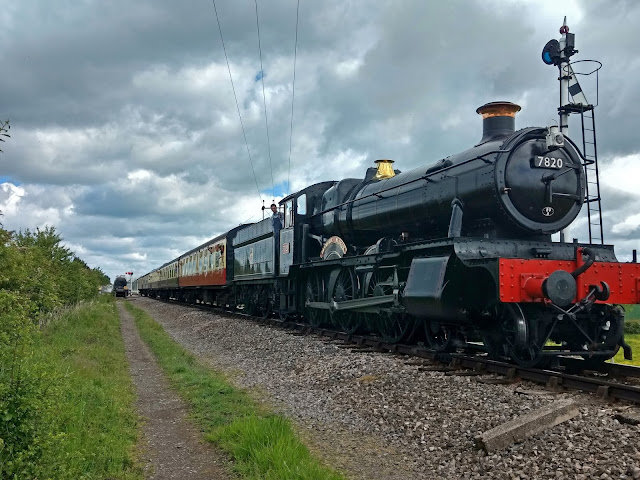 Dinmore Manor disturbed the peace on its way to Winchcombe. 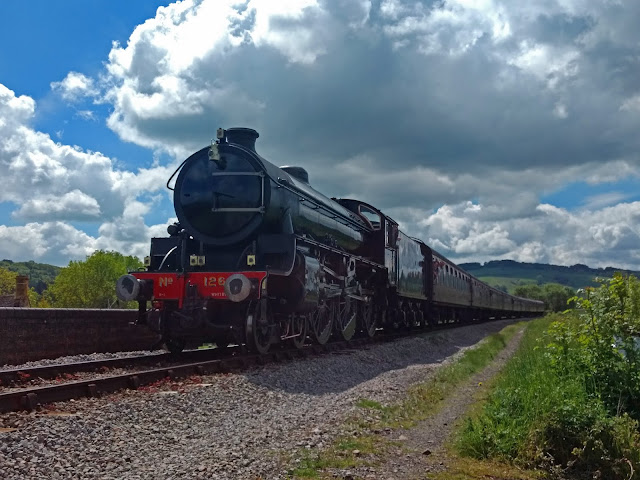 After arrival at Winchcombe, the track was free for the returning train, which was headed by the B1. It's quite possible that during the day this NYMR based loco pulled one of the two blood and custard carriages that we have borrowed from the same railway. 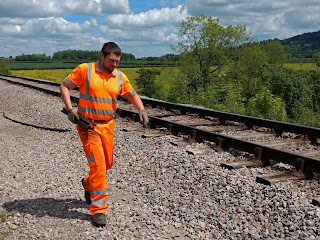 Once we had dealt with the high/low level area, we started to deal with some fishplate issues, and here is Steve bringing a set from the far Landie. Bolted together like that, a set of two with 4 nuts and bolts is heavy, but no issue for Steve. 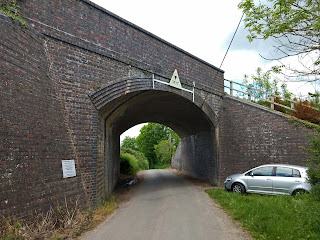 We then stopped for lunch in the mess coach, passing under this very attractive skewed brick arch bridge, which we know as Didbrook 1. Brick bridges like this are a relative rarity on our line, and we marvelled at the skill of the brick layers in 1905 that achieved a perfectly skewed arch, with the heads of the bricks sticking out in rows at the LH end. Does that skill still exist anywhere in the UK today? 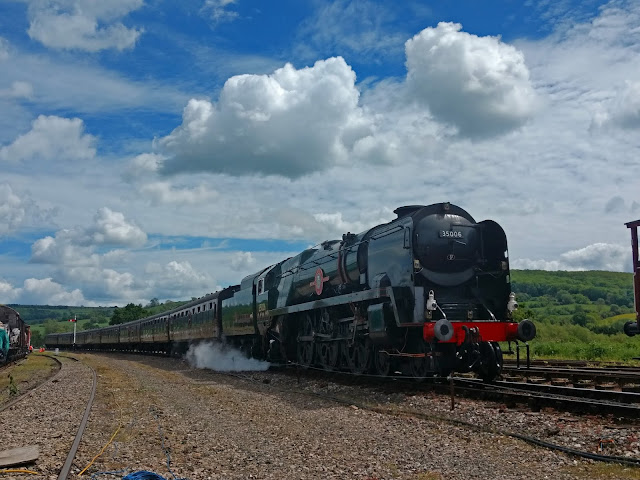 Salad for lunch in the mess coach, a slimming attempt ruined by a passing doughnut and a rather magnificent fruit cake from Mrs. B.

Outside P&O trundled by with a roaring injector exhaust. 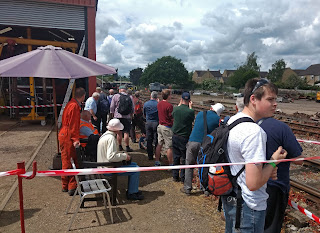 At Winchcombe the C&W viewing area was well attended. It was popular as it gave a rarely seen opportunity to photograph the passing trains from a different angle, the lineside in the yard as it were. 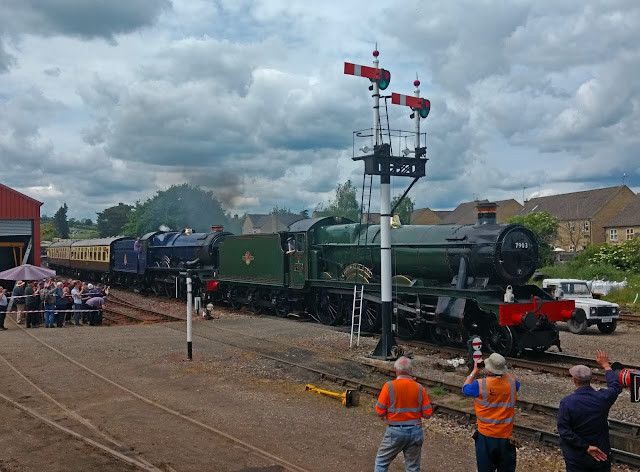 This is what they were after, a double header with King Edward II, unfortunately in second place. We never did see KE II at the head of a train today, smokebox first. But there were so many locos during our gala, one blink and you missed one. 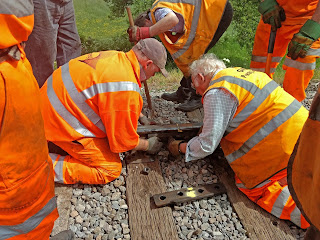 More fishplate business in the afternoon. These weren't really faults, but we swapped a plain fishplate for an insulated one, so moving the end of the block section along a bit, to meet a desire from S&T who put an 'X marks the spot' for us to mark the new location. 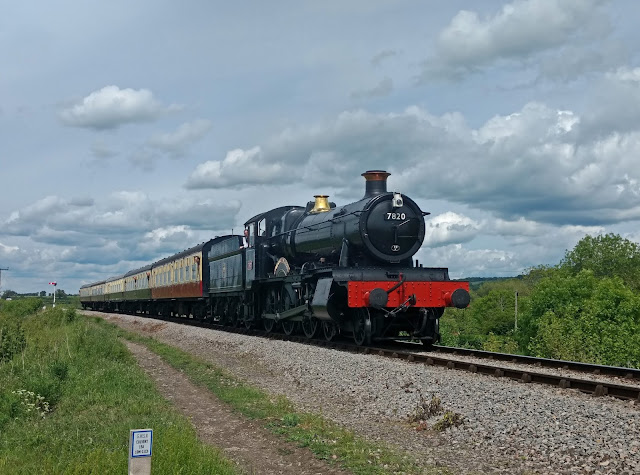 Dinmore Manor then came by at Didbrook, hauling the short rake of 5 that was originally intended for the lovely blue Caley tank. We said it last week, this is a lovely spot for a photograph as the train rounds the curve coming out of Toddington. The sun and clouds were perfect. 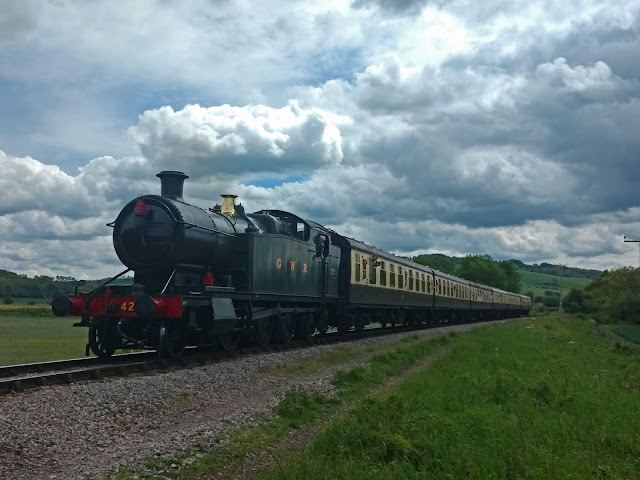 A few minutes later, after crossing Dinmore Manor at Winchcombe, 4270 came heading north with the chocolate and cream rake. 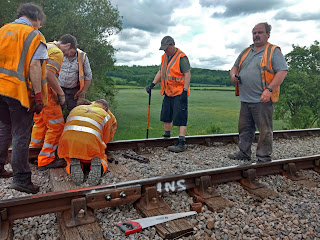 We completed fitting the relocated insulated fishplates mid afternoon. There can be no doubt that S&T intended us to do it here!

Just the two of us again, due to holidays. The weather was forecast to be fine in the morning, and showery in the afternoon. 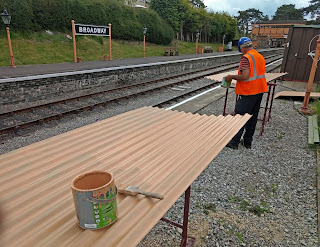 The best thing to do then was seize the opportunity while it's dry and paint the roof sheets. Here the third layer is going on, with another three on the other side.

We got it all on, but after drying for about an hour they were subjected to a shower - just as forecast. Luckily we are only at the undercoat stage. 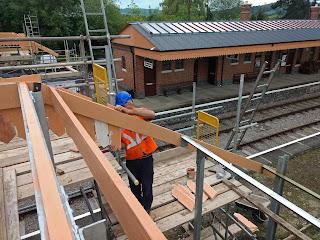 As it got a bit damp towards the middle of the day, we transferred our activities to the dagger boards on P2. Here's Neal going down the Cotswolds side, and later on he got to where he wanted. There are a few more to go on to the bottom end, but they are a different shape, so that's for later. 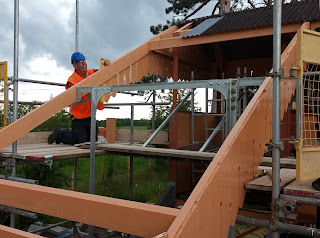 After lunch Neal started on the Malverns side. The earlier paintwork on the roof sheets was going off nicely, so we thought we'd give it another go but then a second shower arrived and made everything wet again. In between times we had a discussion with an electrical contractor about the non working three lamp posts on the forecourt. It seems the builder used the wrong type of cable underground (too soft and fragile) and it was subsequently damaged during the forecourt levelling exercise. Oh well. Nothing that can't be addressed. 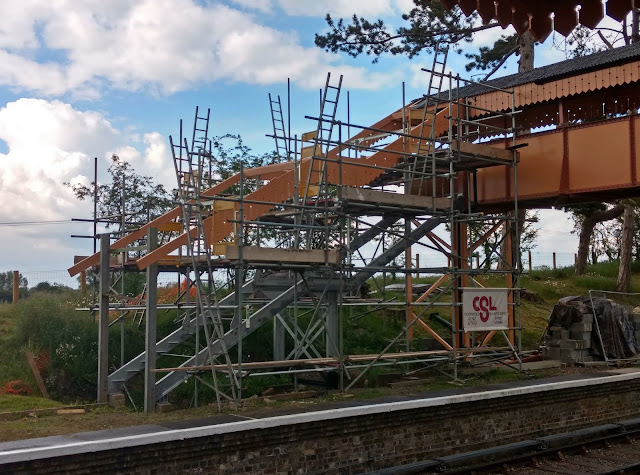 Our final look for Friday shows the P2 side of the steps - dagger boards nearly all the way down on the Cotswolds side, and just started on the Malvern.

Outside on the forecourt, someone with an excellent taste in cars: 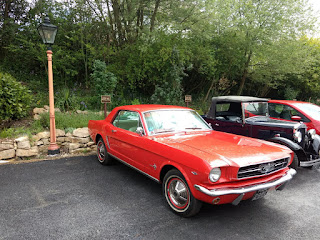 The little black one, or the red one though? We vote for the Mustang!