Twenty three degrees today, and no shade: Our first hottie on the job. 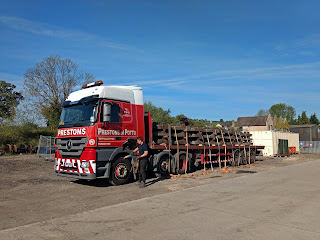 The first person to arrive at Winchcombe was the lorry delivering another load of second hand bullhead concrete sleepers from the NYMR.

We hadn't even had our tea yet. First things first.


After tea we split into two groups. One to go to Toddington and change sleepers, the other to continue with the new platform wall at Winchcombe. 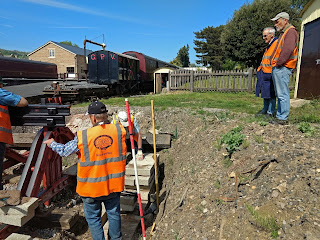 Paul and Jim made a start at the station end, where they raised the tower a little further.

They were supervised by two passing volunteers who were attending to the reverse osmosis plant. 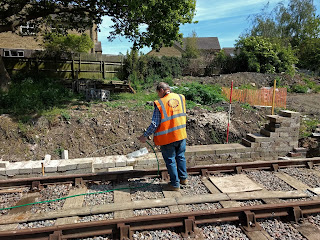 Given the heat Jim decided to water down the blocks. A first this year! We had to resort to the Coffeepot for extra drinks for ourselves too. 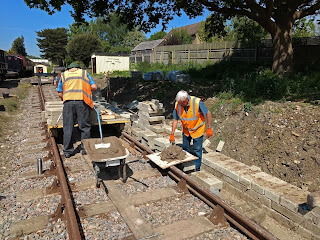 Having unloaded the lorry load of sleepers, Peter joined us mid morning and set about filling in between two towers. Neil pushed the trolley up and down and served up concrete blocks for anybody that wanted some.

Maxie was asked to make us some mortar, which she did, after balking a bit at starting. It's probably like getting out of bed, you're never at your best so early in the morning. After quite a few pulls - she no longer has a choke, that went AWOL somewhere along the line - she finally agreed to start and then muttered away contentedly. 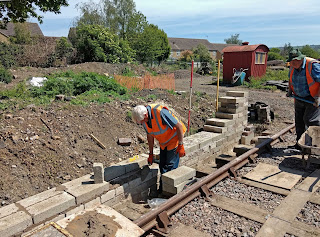 Peter was on infill duty then and can be seen here laying the fourth course at the northern end. With 4 courses he hardly has to bend over any more now. The first course, on the ground, is really quite hard to lay.

Neil is hovering with a shovelful of muck, ever helpful. These block layers can be really productive if they have the right support. 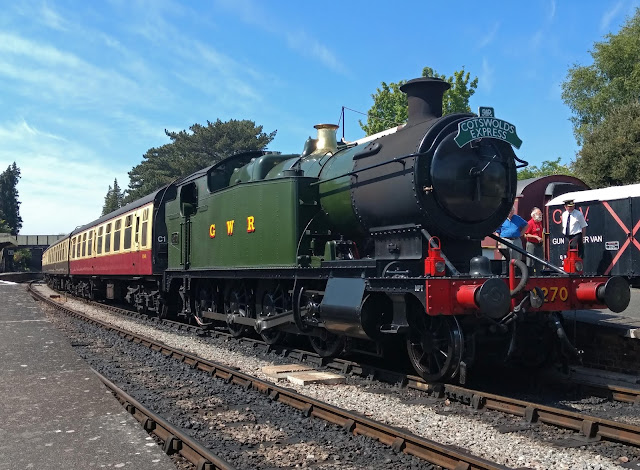 Our big tank engine 4270 is back, and here very kindly stopped at the platform in the 'photographer's pose' with its rods down.  Thanks guys! (if you knew). 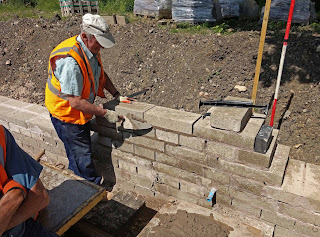 Paul does the towers for us, and this sets out the shape of the wall (with people like Peter doing the infill between)

Today he did the middle one, and made it not only taller but also wider. 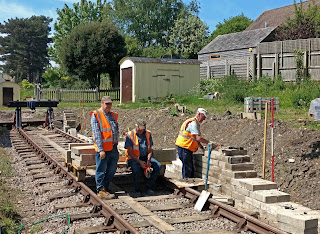 Paul's middle tower took on quite substantial proportions today, while Peter and Jim decided to have a bit of a rest. Tired, but not very emotional they were. 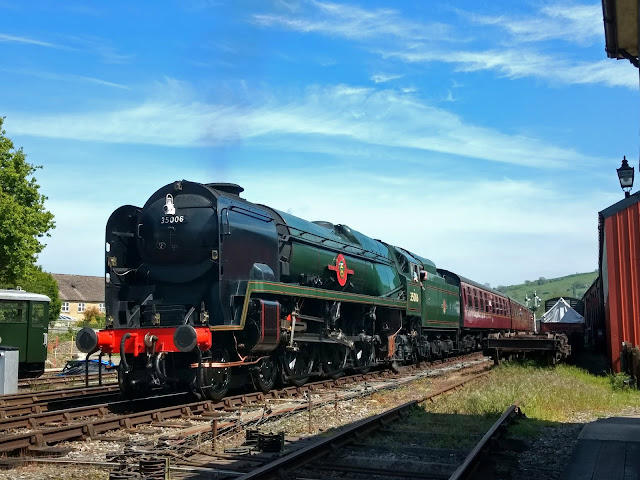 The other steamer today was P&O, and even without looking up we knew which loco was coming as they had two very different whistles. P&O stopped by the bracket signal at the back here, and when she pulled away she produced a perfect smoke ring with the first beat. Magic! 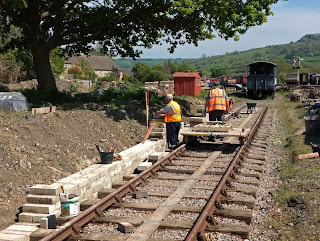 By noon the sun was pretty hot, after a sunny but cool start.

We loaded the trolley up with a ton of blocks first thing, and by the time this picture was taken Neil had pretty much dealt them all out.

In view of the mounting heat Jim very kindly offered us some cold refreshment, so went down to the shops to get a catering sized box of Calippos, which we all sucked. 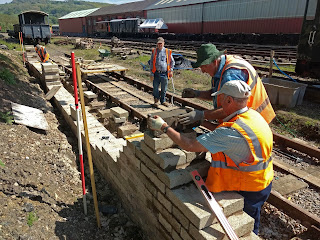 Mid afternoon came an interesting moment as Paul reached the highest point in blocks, and with the help of Neil placed a marker on top of it, in the form of a big brick edging block.

This gives the level of the top of the platform. 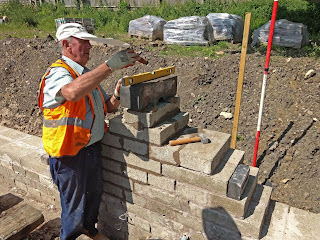 Paul gave it a good tapping to make sure it was well settled and at the correct height.

The block is temporary, and will be replaced by more permanent examples when we get to that level. 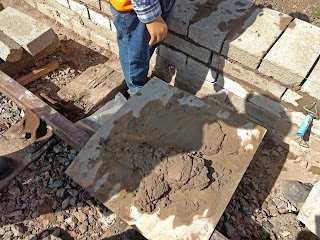 Towards the end of the afternoon we were starting to think about how much more mortar we might need, or how much we could lay with what we had in the barrow.

Peter had this much left on his spot. Would it be enough to fill in the gap he had? 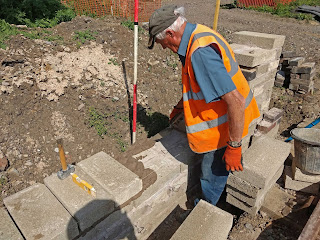 Peter started the day laying the fourth course (at the southern end) and finished it with the fifth. Here he is eking out the bit of mortar he had left to make it fit the gap to be closed. 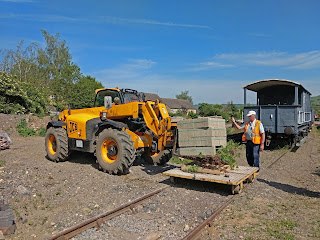 Job done! We felt pleased with what we had achieved, given that there were just the 5 of us. One of the other brickies has a swollen ankle, while another is on holiday.

So we should be back up to strength later on.

We think we pretty much got through a pallet of blocks today, so at the end here we are placing another one on the trolley, ready for next time.


The driver of the Telehandler is Peter (again) so you can see he can't lay blocks as well as assuring the supply of them at the same time. And unloading the lorry load of concrete sleepers. Busy busy busy. 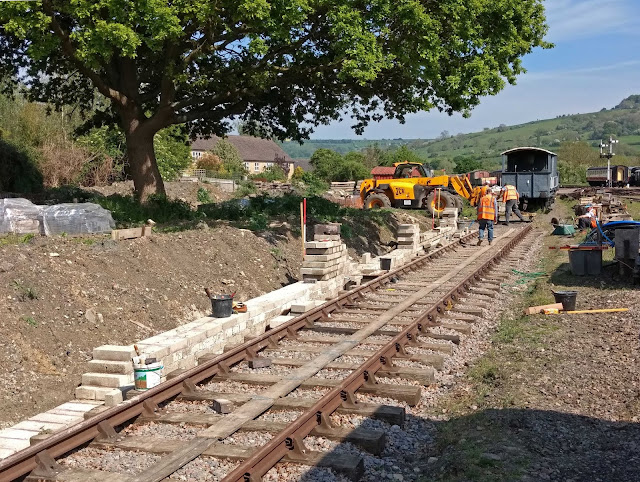 Here's our overview at the end of the day. One row in the near foreground, then four, and five at the back. 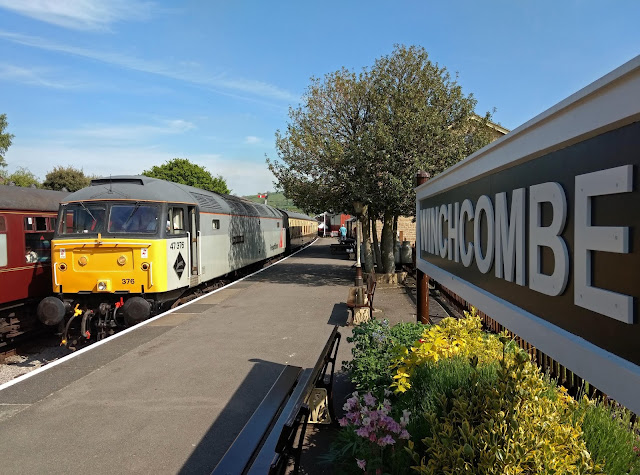 At the end of the day our only wish was for a mug of tea in the shade, so we mooched up to the Coffeepot under the canopy. At that moment the class 47 came in with the last down train of the day. 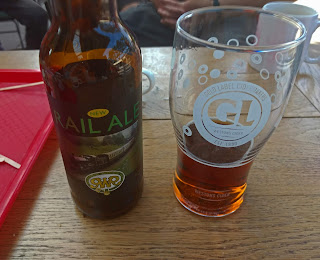 Option (2) of course was a cold beer, and a local one too. Our Rail Ale is brewed in the Cotswolds,
why not try one yourself?

The canopy gang continued with cutting and placing dagger boards. We've done the P1 steps and are well into the P2 ones. 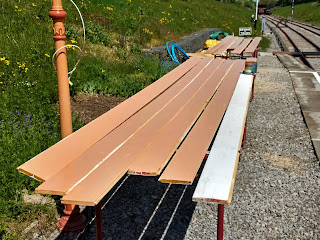 The production process for the dagger boards is a long one, starting with the knotting compound, then primering and then undercoating these boards. Both sides of course, leaving each side to dry first.

Then they are cut to length, then shaped to a point, with the top cut off at an angle, then have a slot on the lower half, and finally two holes are cut into each one. 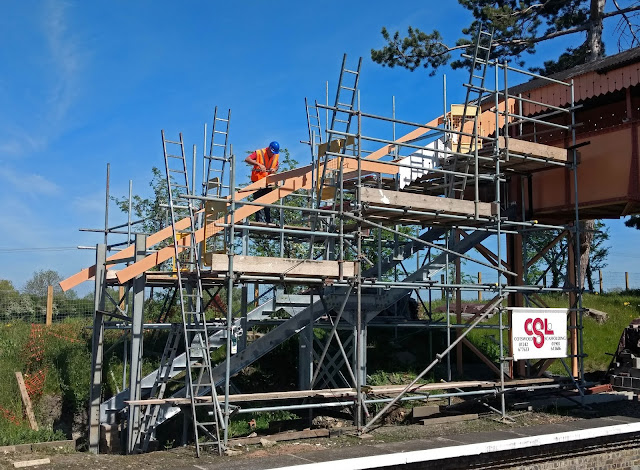 Armed with a supply of such boards, painted, cut to shape and drilled with holes Neal can then attach them to the roof level.

Here though he is fitting a cross member. 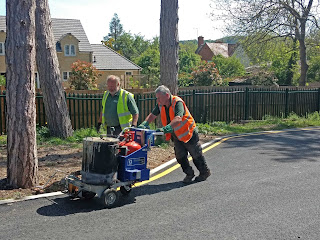 On the drive two workers from a specialist line painting company were putting double yellow lines on the station approach.

It was a slow job, with frequent stops to fill up the pot on the trolley, and stirring it vigorously.

We hope that these lines will bring some order into the parking of vehicles on the station approach and forecourt. In fact there isn't any parking, the area is too small and was only designed (in 1904) to turn a pony and trap. We have a handful of spaces for station staff, some disabled spaces and a bus pull in (in the picture) and a turning area. That's it.

Of course the new council car park is just under the bridge, and has plenty of room. 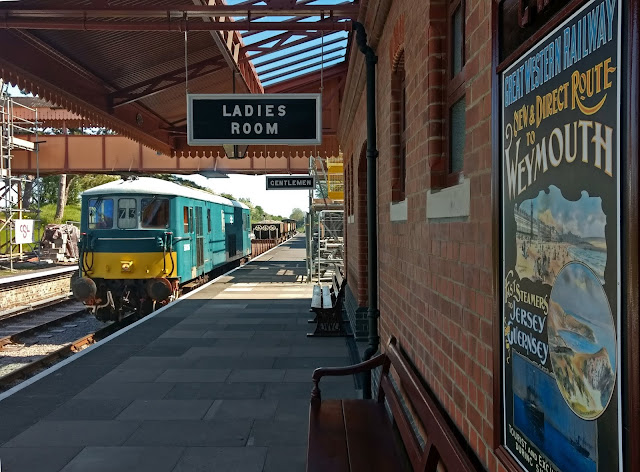 Mid morning on Friday the class 73 came to pick up the ballast train. You can see it here passing through the station from the north, with one of the 4 new posters on the right. 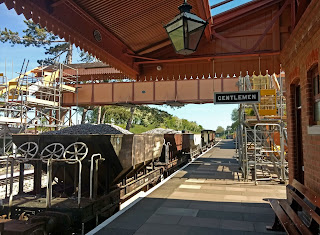 The Dogfish ballast wagons rumbled on behind. The destination was a stretch of track near Laverton, which needed more ballast on the shoulders.

It was a job quickly done, and an hour later the train returned to Broadway.


It's just a short report on Broadway this time. We had a day off on bank holiday Monday, and spent Friday last week helping to plant the two yard lamp posts at Toddington, which are now in.

Next time we will continue with the dagger boards, which must be approaching the end by now. Thoughts are turning to the corrugated iron roof, and we have been trying various ways to bend the sheets to suit the shape of the steps.