More dagger boards on Friday, but we are making progress and it is starting to show. 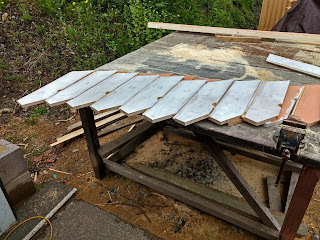 John has a little manufacturing unit outside the container, and here you can see a row of dagger boards, numbered in sequence, and with one hole each. They were about to get another!

The manufacturing was a bit intermittent. The day was showery, so he was in and out of the container.

Opposite, on P2 more T&G boards were being primered, and here again rain would stop play and everything had to be hastily carried back into the container there. 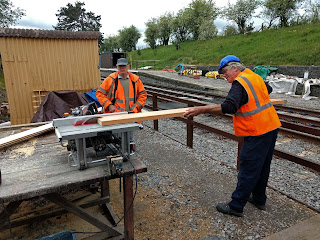 Neal was busy preparing and fitting the cross members on the P1 steps. They need an angle sawn into them, so that the downward slope of the roof of the steps can rest on them. 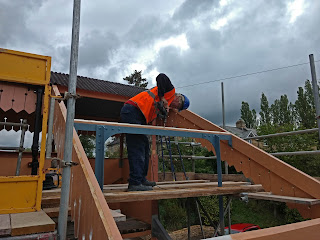 Neal then fitted the uppermost one, so that the corrugated iron sheets could now be fitted, but we have other things to do first.

All the dagger boards on the P1 steps are now fitted, and most have had a coat of undercoat too. Along the top of the dagger boards, just under the corrugated iron sheets, runs a wide moulding and we are currently contacting a supplier to have this specially made. 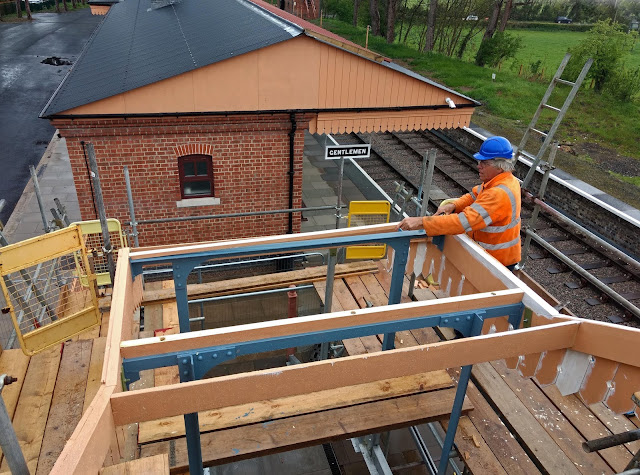 The intermediate landing has had one cross member fitted, and in the picture Neal is just trial fitting the second. In the foreground is a third, and you can see how this is all level with the boards along the edge so that the corrugated iron sheets on top have several contact points on which to rest. 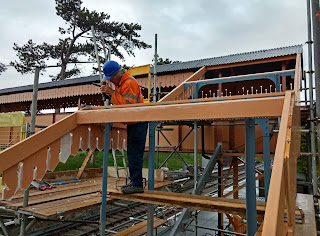 At the end of the day, after two heavy rain showers and a darkening sky, Neal was just fitting the second cross member to the landing.

Last week we came across an interesting echo from the early days of the GWSR: 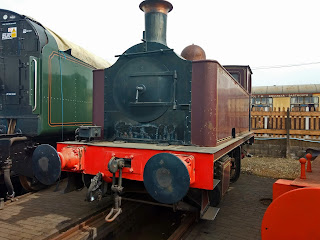 Recognise who it is? It's CADBURY No.1, the little Avonside loco that pulled our very first trains. She's now berthed at Tyseley round the turntable. She's too small for us now, with our 8 coach sets, but back in 1984 she pulled the opening train with one coach, later two. We had a whole 700yds of running line to start with.

Here is CADBURY No.1 in her glory days in the summer of 1985, just crossing Didbrook bridge.

The picture is from the John Lees collection in the early GWSR Flickr site.

We are still posting track laying pictures to it, and have now reached the year 2000, when Cheltenham Race Course was reached. The most recently posted pictures can be seen here:

Saturday out along the track


A good crew of 13 today, and only 10 doughnuts! They were the last two packets in the shop, which made us a bit suspicious of exactly how old they were.

But they were still doughnuts, so we ate them.


Today's mission was the elimination of several dips at Far Stanley. 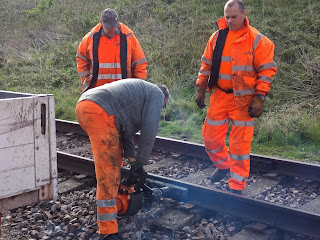 We stopped briefly along the way to insert a missing bolt. A brief clatter, and we moved on. 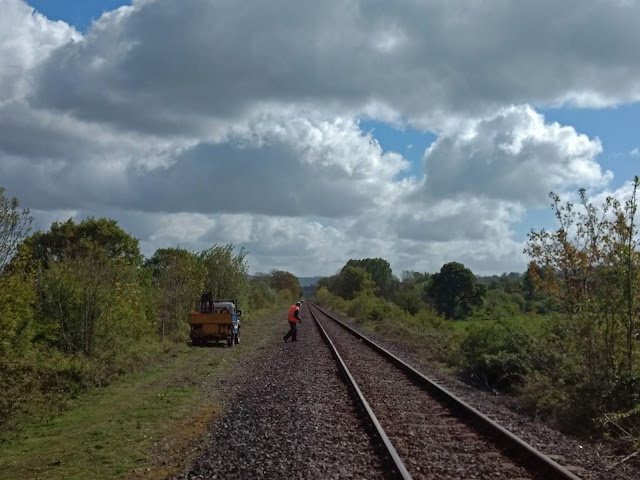 This is the stretch, a long straight between Gretton Halt and the long Dixton cutting, behind the camera. We're looking towards Greet tunnel, just round the bend in the distance. This is probably the prettiest stretch along the whole railway, as the train ambles along on an embankment right at the foot of the Cotswolds Edge.

We're working with temporary speed restrictions here (TSRs) and the blue Landie has just stopped to put one of the boards up. 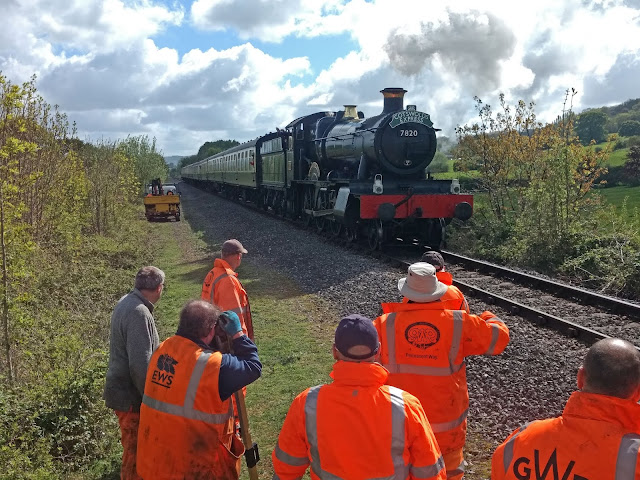 We tested the TSR with a passing train, the first one south of the day. It worked. You can see we are well dressed today, as it may have been sunny but the wind was biting and the outside temperature started only just above freezing this morning. 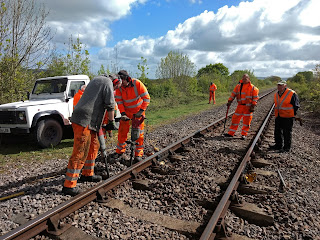 We were a two part team, with the blue Landie crew digging out the sleepers around the dropped joint, and the white one following with the Kango hammers and two 'shovellers' who closed the sleepers up again. 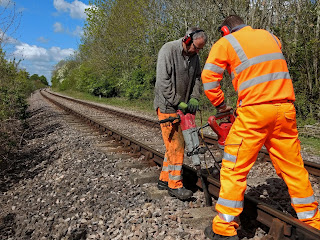 Ade and Steve were on the Kangos today. You can see that the track has concrete bullhead sleepers, an upgrade from bullhead on wooden sleepers nearer Toddington, but not as good as FB rail on concrete sleepers, nearer the southern end of the railway, and on the Broadway extension. The quality of the track improved, the further south we laid it. 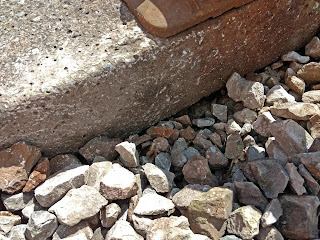 This close up shows the issue we are dealing with. By lifting the track back up to level, we reveal a gap underneath which has to be (re-) packed with ballast. Typically this raises the joint in question back again by about an inch. It's hard to see when you are looking at it from a few feet away, but you certainly notice it from the carriage or the footplate. 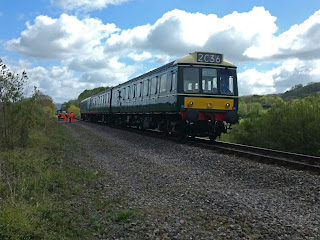 Today two steamers and, in the middle, a DMU were out. It went to Cheltenham (following the steamer) and returned past us quite well filled. 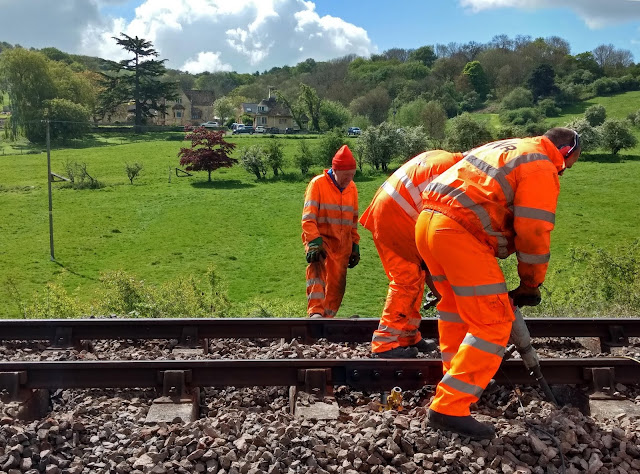 Here's an example of that Cotswolds beauty, a lovely Cotswolds stone farmhouse up on the slope. This is Middle Stanley Farm, used as a corporate and wedding venue.

David and Andy have taken a turn on the Kangos, which are quite taxing. 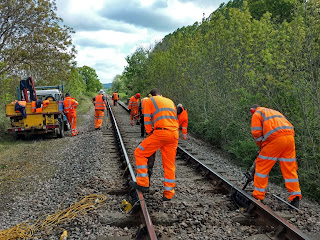 We moved on down the line, towards Gretton, as there were several dips.

Up ahead the blue Landie team are moving to the next site, which they will dig out ready for the Kangos. 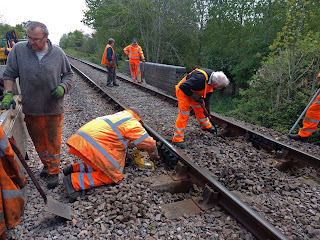 This is an occupation bridge, a full sized brick built structure which today sees very little use, its original function of linking two fields having long ceased to serve. Today only a barely used footpath is in evidence below.

The last set of dips was right here, just in front of the bridge abutments. 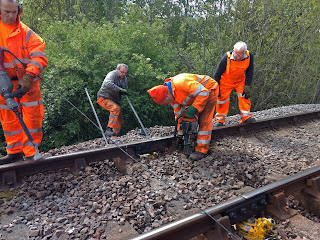 There were two dips in quick succession, and his can result in a roll from side to side if you are travelling above.

By observing the carriage bogie wheels when a train passed, we could also see the behaviour of the suspect area. Here we noticed that the rail was rising and falling, together with its cast iron chair on top of the concrete sleeper. The chair is therefore loose.

While Ade levers the sleeper up, Steve gets ready to apply the impact wrench to the two bolts that hold down the floating chair. These were successfully secured, and then packed by David, who can be seen waiting, Kango in hand. 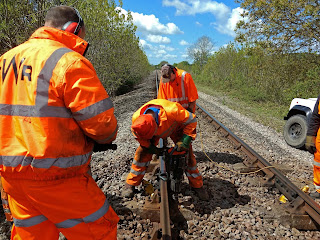 Here's Steve having a determined go at the nut holding the cast iron chair to the concrete sleeper. These won't always do up - one of the drawbacks of this chair fixations system, as the head of the bolt can rotate underneath. It's very similar to the GWR throughbolter system, and can be difficult to cure. This time we did it though. 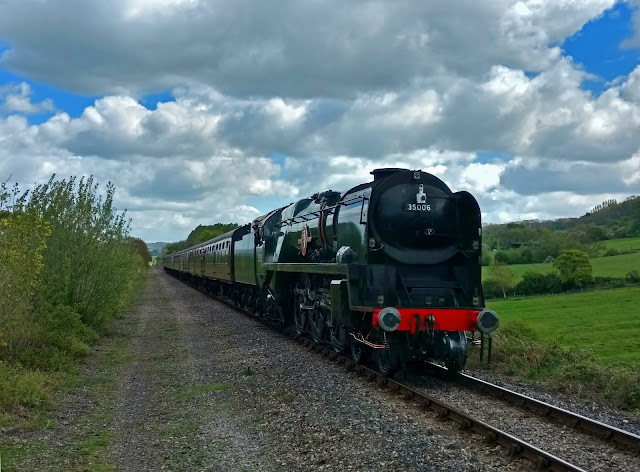 Our mission at Far Stanley was accomplished just in time for lunch, which we took in the mess coach back at Winchcombe.

Not before we let our heaviest locomotive try out the bits we just packed. That seemed to go OK. Not finding the speed limit boards that we had just recovered, the driver leaned out to ask if the TSR was still there. No it wasn't, we don't hang around here. We want to keep our track in tip top condition.