Work on the footbridge steps will slow in the next few days, as the station approach and forecourt are finally receiving their tarmac topcoat. 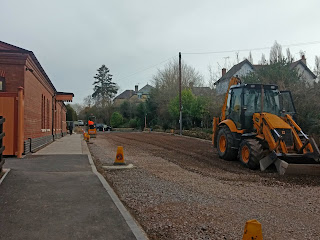 Steve came with his JCB and gave the surface a final scraping. It's quite a delicate job. Leave any dips or holes, and these will fill with tarmac and this won't make the supplier happy at all. 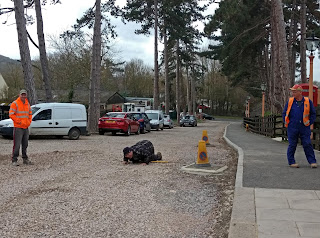 The final levels were all determined by eye.

You may laugh (titter ye not!) but this is how we did the extension ballasting too. None of dem new-fangled lasers for us.

Stevie is extra prone here, just for the camera. Or maybe just returning from a visit to the Crown and Trumpet? 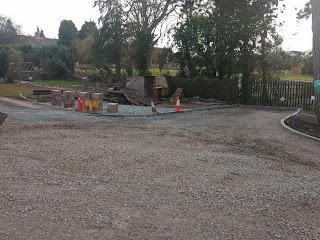 The bus turn around is also taking shape. Kerbs have been laid right round to show where it is.
There will be a tarmac 'undercoat' as it were, and then a tarmac 'topcoat'.

All this is happening on Thursday and Friday this week, then again on Tuesday and Wednesday next week (if our memory serves us right). Not Monday then, that's binmen day.

So don't come to Broadway and hope to park your car here. 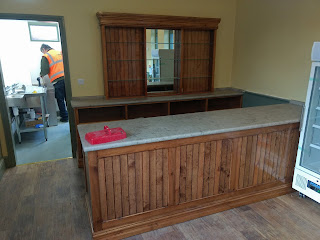 Inside the cafe the counter has been fitted. It looks the biz! The front actually has 4 panels but for a reason your blogger does not understand it is very difficult to see that. 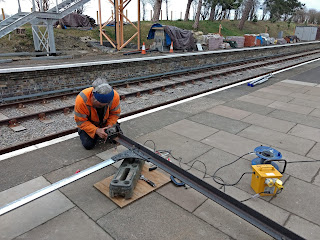 And so to work. Our job today was to fit the last hoop on the P1 side.

This hoop is the one which sits right on the outermost edge of the canopy extension, so we left it as a kit of parts to make sure it was the right height. 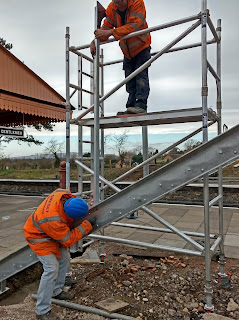 Neal only had to trim 10mm off the top of the upright, so its length was pretty much correct. He then used the mag drill to drill the holes to allow the cross member to be bolted to it. Once we had the right length and all the holes, we fitted the uprights, and then the cross member on top. John's putting the bolts in here. They matched the holes. Of course. 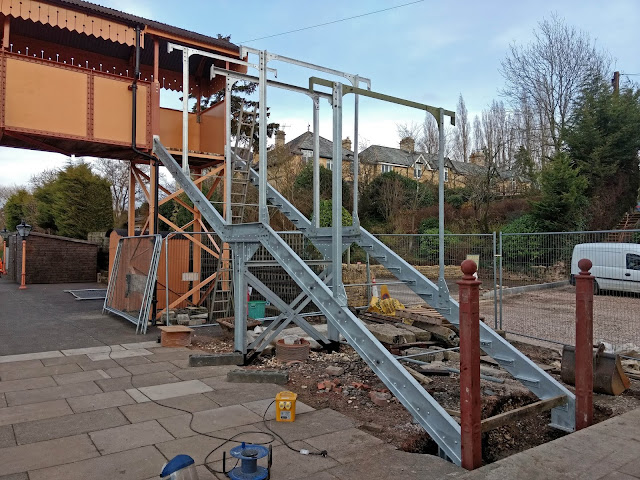 At the end of the day the fourth roof hoop was on. We also tightened up the tie bars to get the stringers straight.

During the day we also got out the original HIA handrail supports, caked deeply in paint and old rust. These were taken down to our friendly shotblaster in Northwick Park nearby. His father was a fireman on our line! Now that deserves our business.

Still do to next time: Secure the newel posts to the concrete, and connect the tops of the posts with wooden spacers to get them all the right distance apart, ready for riveting. We might also make a start on tidying up the wooden treads, also originals from HIA.

The PWay support train has been moved back to its siding at Winchcombe, and that is where the PWay gang met this morning.

Four of us went to Broadway to continue fitting insulated fishplates, part of the signalling there. 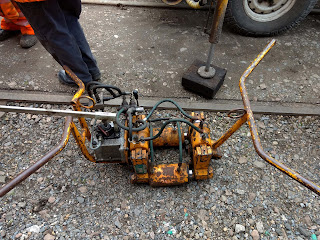 They took this interesting piece of kit with them.

It's a gap adjuster. It can pull two rail ends together (OK....) but can also push them apart.

This second option sounds like a wind up at the expense of the blog, but maybe... 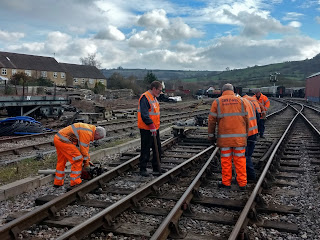 Most of the rest of the gang decided to change some timbers in the running line just north of the platform. Fishplate greasing was not possible today, as there was a works vehicle out on the line. 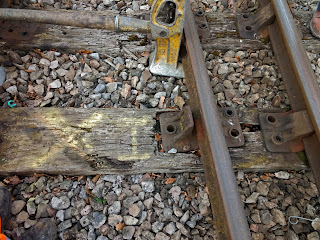 The timbers needing changing had already been marked. That's the easy bit. Now comes the replacement, which is a lot harder as they are heavy old things.

See how the chair has sunk into the wood, which is hollow inside. 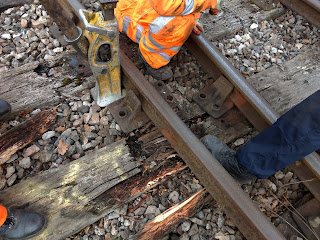 Just to prove how rotten the timber was, John started hacking at it with a bar, with some success. 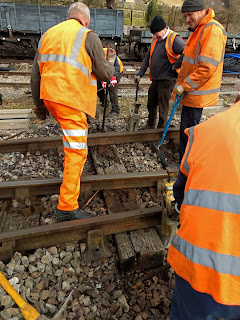 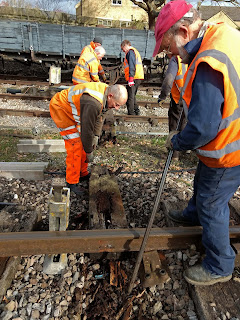 When we started to pull it out with the nips, it duly separated into two pieces.  At least that made it easier to manipulate. 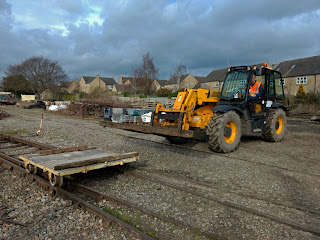 We then went back to the yard to retrieve two good second hand replacements of the right length. As there was Telehandler training going on today, this was a welcome opportunity for the trainee to show his skills.


A scene of intense concentration... 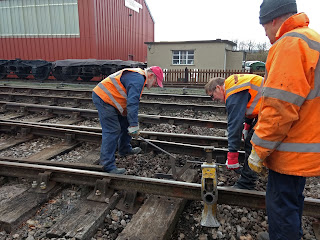 The two replacement timbers were (sort of) welcomed by the crew on site and hauled into the now scraped out bed of the previous occupant. 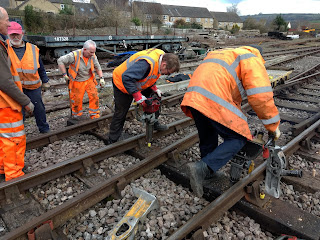 Then for a short period there was a furious rattle as both sleeper drill and impact wrench did their jobs. 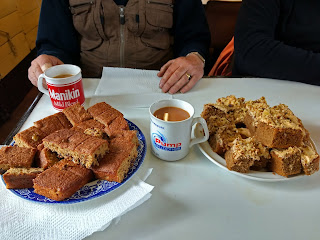 We did the two timbers, then broke for lunch in the nearby mess coach. We found two large plates of cakes, which went very well indeed with our mugs of strong tea.

Why the cakes? It was Clive's birthday. How very kind of him, and we gave him a rousing 'Happy Birthday' too. 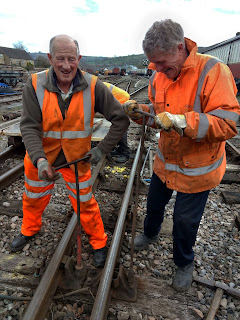 After lunch we attacked a third timber, this time loosening the chair screws in the traditional manner with 'T' spanners.


It was discovered that there are two sizes - short and long. This matched Rick and Dave P perfectly! 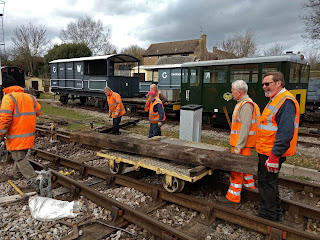 Another second hand timber was located and brought up on the trolley. Dave D is laughing as someone told him to lift one end. Ha! Have you any idea how heavy this thing is? 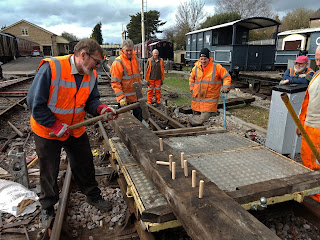 Before dragging this little baby into the crib we plugged up the numerous holes from its previous existence somewhere.

Dave D on the keying hammer knocked them in, a bit like a carnival game, it seemed to us. 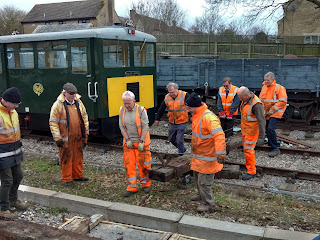 After securing our third timber down tightly and packing it, it was time to tidy up. We had three old timbers to trolley away. Even rotten, they were so heavy that it took 6 men on the nips to lift it on to the trolley comfortably. 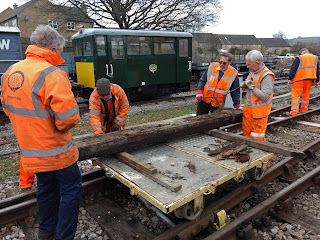 Last picture of the day, a delve into John Lees' treasure chest of trackwork pictures since 1981: 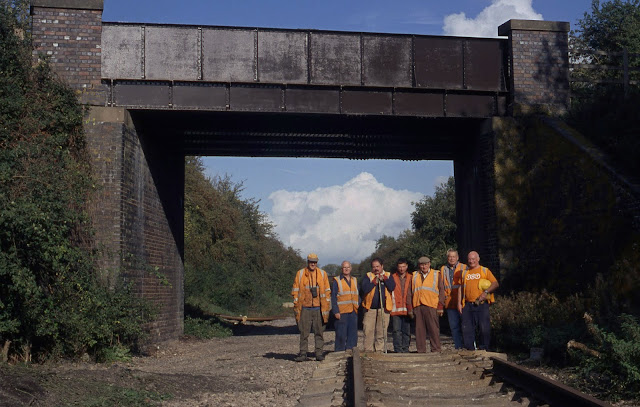 This was the head of rail as it reached the road bridge to Stanton village in 2006. The size of the volunteer team is modest, just 7 of them in the picture, and an eighth behind the camera.

Thanks for getting us this far, guys! Think about them next time you travel over this stretch, we wouldn't be there without them.