A second hoop fitting day. We saw that the contractor on the drive had a largish 360 digger so we asked him nicely if he could help lift in the P1 roof hoops for the steps. 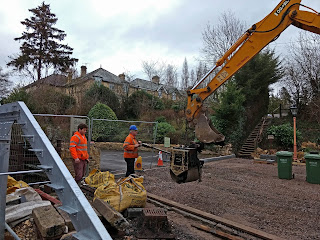 First of all we had to clear the site of the steps a bit.

This old road roller is now in the way. It gave valiant service when we compacted the platform infill, but it now needs to be taken off site.

Ad interim we walked it round on the end of a chain to the platform, and then rolled it behind the footbridge tower. 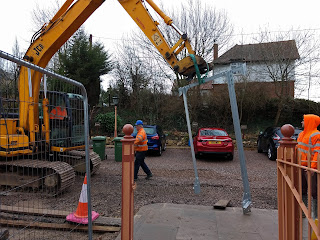 Then it was time for the first hoop. The 360 made it all too easy. 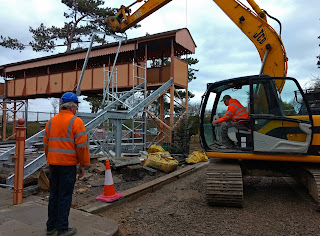 The roof hoop was swung round into place.... 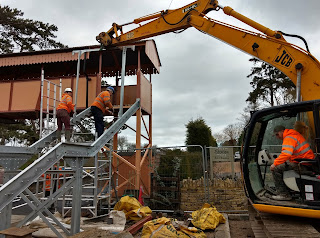 On to the next one! 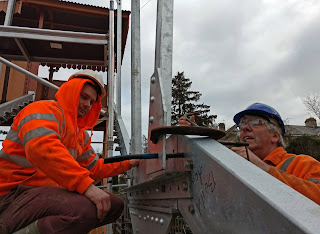 The second one soon followed, and then the third.

Here Richard and Neal are trying to line up the bolt holes with a G clamp and a podger, but there was a strange reluctance with this one to fit into place. One of the legs looked bent. 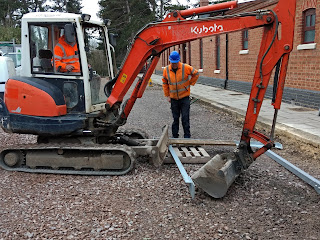 It was too! How was that possible? We could only guess that somewhere along the transport from loco shed to Broadway one of the legs got snagged on something.

The leg was bent back into place using the mini digger that was also on site. Phew! 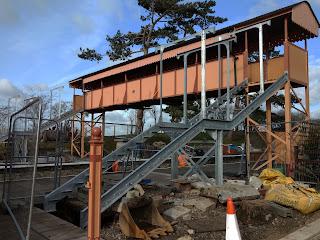 We lifted the third hoop back into its place on the lower half of the intermediate landing, and this time the bolts went in without problems.

In this picture you can see all three hoops fitted. The fourth, half way down the lower stringer, just consists of two uprights at the moment, easily fitted by hand. We will do them later. 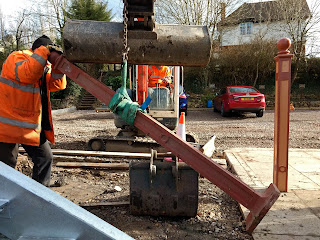 Then we decided to fit the two replica gate posts at the bottom of the stringers. Here they will act as newel posts. They will look like the one on the right. 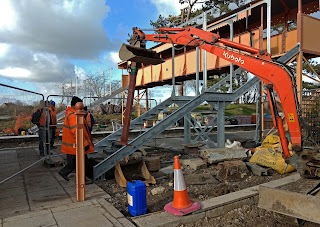 Again the mini digger did us favours. Although these posts can be manipulated by 3 - 4 people they are heavy and a bit awkward to drop down a hole without risk of breakage.

The posts are replica GWR castings that we have organised, and we could sell to others given a reasonably sized order. 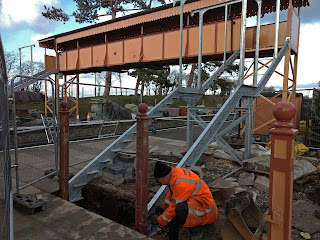 The second post was also lowered in, and then attached to the bottom of the stringer by temporary G clamps.

You can now imagine how the handrails will come down here, ending with the ball topped posts.

This is not the original arrangement, where the two newel posts also held up the canopy overhang, but due to the incorrect siting of building and bridge we are having to think of a new but realistic alternative.


The two newel posts replace the roof support pillars that ought to occupy this position, had the footbridge and station building been paired up correctly. You can see the original arrangement in the picture below, taken at Hall Green where everything is still as it should be.

Mike would like to bring this bridge to the railway, but he can't do it all on his own. 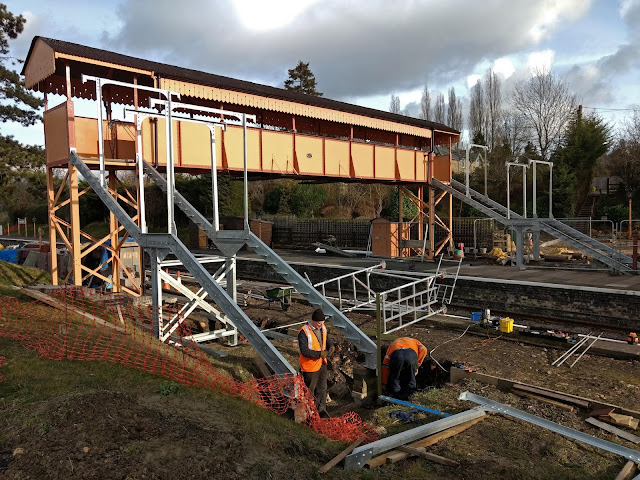 In this overall view you can see 6 roof hoops now in, and our attention has been switched to P2. Here we are likely to be able to achieve the original canopy support arrangement as the P2 building is not yet up, so temporary newel posts are being fitted here.

In the foreground is the fourth and final roof hoop for P2, not yet fitted. We'll do that one another day, without mechanical assistance as it is near the ground. 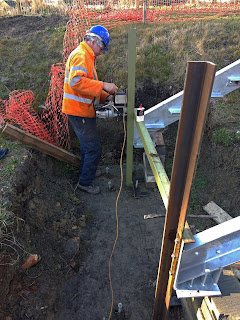 In this picture Neal is drilling the temporary newel posts for P2.

These will hold the stringer ends in place and the correct distance apart until construction of the P2 canopy overhang starts. 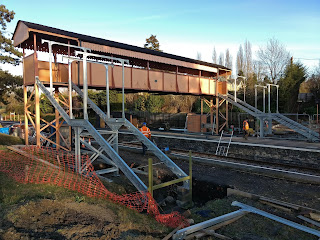 At the end of the afternoon the two temporary P2 newel posts are also in place, and all is safely bolted together. 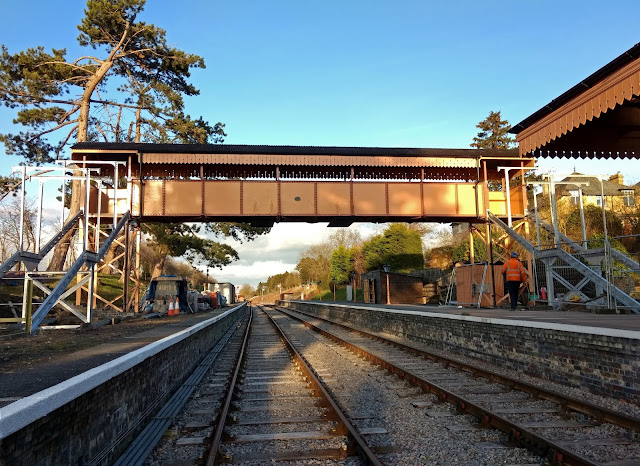 A last view of the bridge and stairs from the trackbed, as we were clearing up the tools.

Elsewhere at Broadway, the cafe counter has been delivered, as forecast by the C&W blog. 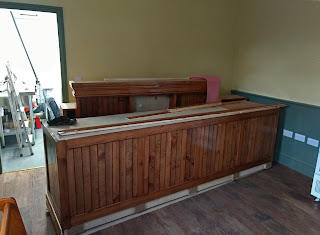 You can now see what it looks like (almost) in situ.

A second counter up against the wall can be glimpsed behind it, and on this will sit the mirror flanked by the two shelves.

It all needs fitting into place still though. 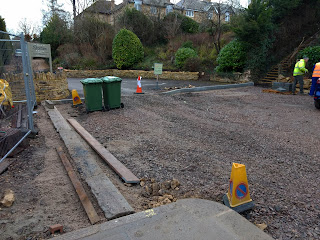 Outside the contractor doing the drive and forecourt has completed the kerbing. It's in original granite nearest the station, and in concrete across the B&B drive. Two layers of Tarmac still to come. 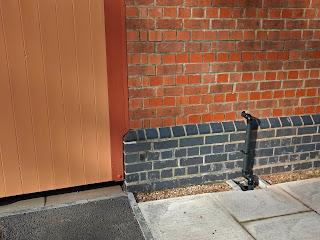 Less successful is this plastic drainpipe now emerging from the front of the building.

This drains a sink in the kitchen. Surely the exit hole could have been located much nearer the drain, to be more discreet? 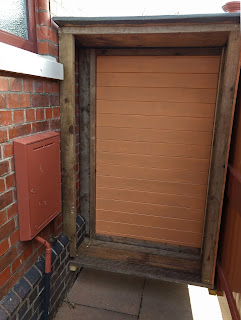 Also less successful is the use of the modesty screen to provide two walls for an ad hoc cupboard outside the kitchen. It does not enhance the heritage atmosphere.

On the left is the modern gas meter box.

To carry out the riveting of the steps and 2 canopies at Broadway we need a compressor. In total we will need to use one for 5 weeks as a minimum, and that would be a lot of hire fees, so it crossed our mind to try our luck on Ebay and get a second hand one to buy, if the price came to less that five weeks hire and delivery. 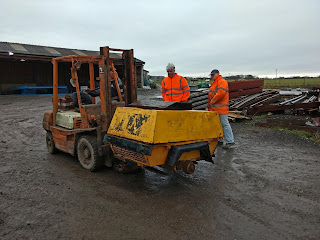 We bid successfully for one in Accrington, a 3 1/2 hour drive away, and drove up there on Tuesday to collect it. We knew it had no wheels but that was fixable, and it brought the price down.

Before having it loaded we asked for a demonstration, which it failed miserably. Prior to putting it on Ebay it seems the seller had not tested it. Reluctantly we decided to return home, empty handed.


Hence a question to our blog readers. We're looking to beg, borrow or buy for a very modest sum a diesel powered single tool road compressor. If borrowed, it would be for a couple of weeks at a time, three times over the next 2 years. (steps, canopy overhang, P2 canopy). Can anyone help us with this? Contact via breva2011(at)hotmail.co.uk.

Or rather Winchcombe first, as another lorry load of SH BH sleepers arrived from the NYMR. 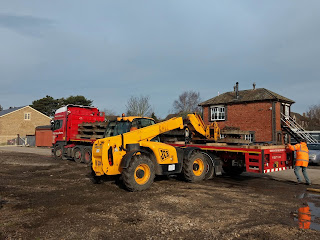 The sleepers removed by the NYMR have been graded and we now have 400 sleepers of the better type, which we can use in our main line to replace wooden ones. We've got 15 panels worth here. 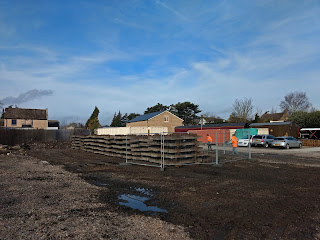 Some of the NYMR bearers were a bit soft, so we decided to use a large pile of Heras fencing panels found on site to fence off the sleepers until next winter. 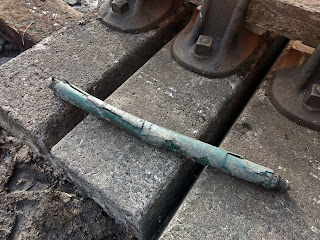 In the sundry rubbish found underfoot is this. We think it is a roller blind from a GWR third, the two that used to stand here. It's a bit bent - any takers? 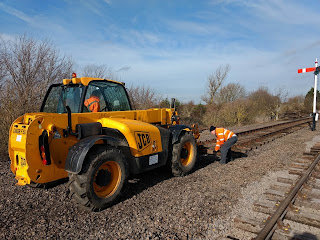 On returning to Toddington we found the gang busy with laying out the last sleepers for the headshunt.

The short section of main line was also packed in a rudimentary fashion, we heard. 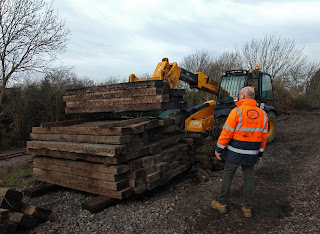 Having exhausted the just about reasonable supply of throughbolted sleepers, we switched our attentions to the pile of SH sleepers for AS1 chairs.

Even here a careful triage was required, as about half were life expired, even for little used sidings. 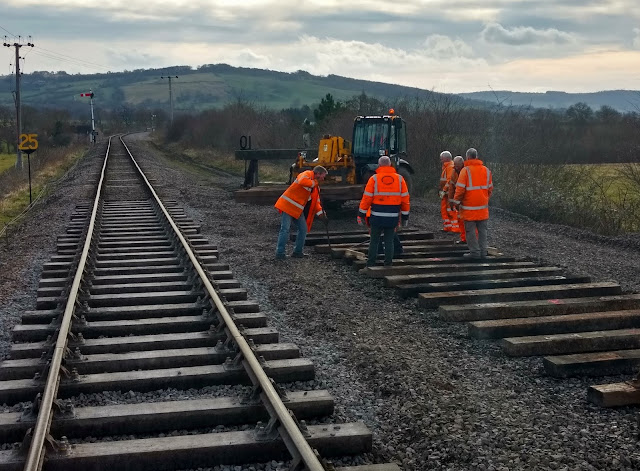 These last sleepers were then laid up to the stop block, which itself also needs a couple, as well as a replacement chair for double rail. 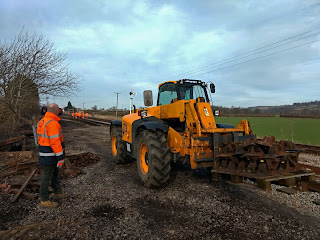 Finally we collected all the three bolt chairs we could find remaining on site.  This made for a heavy pallet, so we got Dave on the Telehandler to drive them down for us. 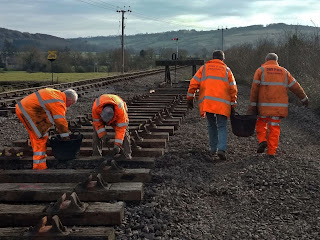 We laid out the chairs along the last sleepers and pushed the bolts in, sometimes with new ferrules where required. 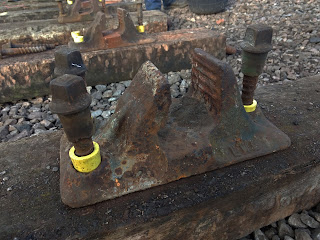 Somewhere in the gang was a very enthusiastic ferrule distributor - can you see what is wrong with this set of screws?

We have a wonderfully diverse collection of chairs on site, from all over the country. Spotted today was one from 1935 marked LPTB - would that be London Transport? 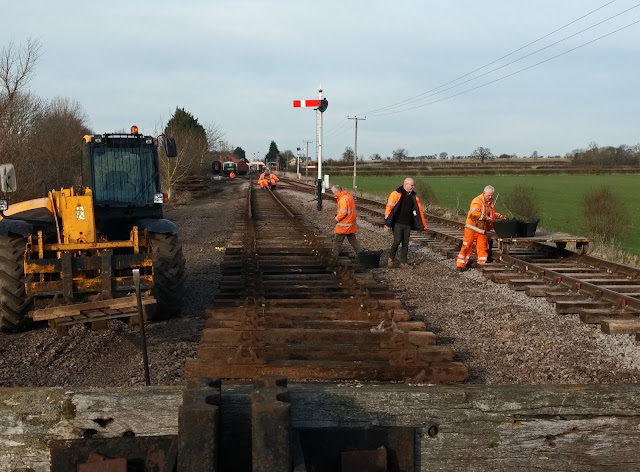 Here's our end of the day shot, with the gang just dishing out the Mills keys, ready for when the last pair of rails is dropped in. 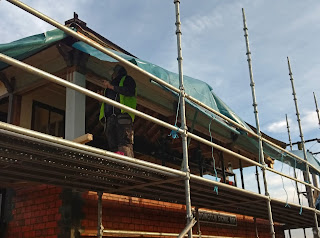 Note the two corner posts cut off, and the nearest has a new piece of timber spliced in. That supports a heavy wooden frame on which the roof sits at the front of the building.