A busy day with Tarmac

Brilliant sunshine this morning, an ideal day for tarmacing at Broadway. Four days have been earmarked to apply a base and a finishing layer to the station approach, the 'hammerhead' bus turn around, and the forecourt. Today was day 3, Friday being largely lost to further stone filling outside the station entrance where a bed of clay had come through. 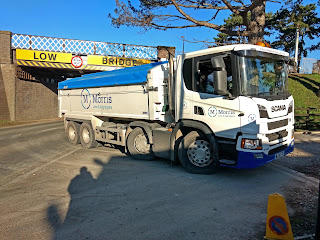 The day started with a large lorry loaded with hot Tarmac just turning into the station.

Volunteer cars were parked in the new council car park just under the bridge. The last day for querying the proposed daily charges was 22nd February, so activation of official parking can't be far away now. 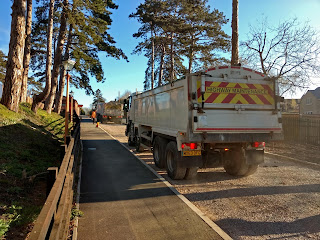 A second large lorry of hot Tarmac almost immediately joined the first one. 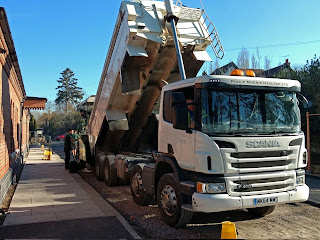 The lorries turned round in the 'Hammerhead' turn around, and then reversed up to the paving machine. The Tarmac was filled into it bit by bit, so as not to make the front of the machine too heavy. 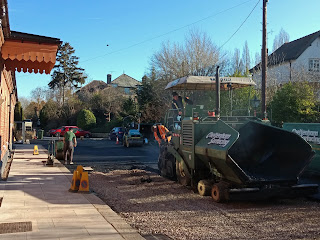 We're still on the first of two layers here. Having done a strip on the right on Thursday, the machine then did the middle and along the front of the station building. 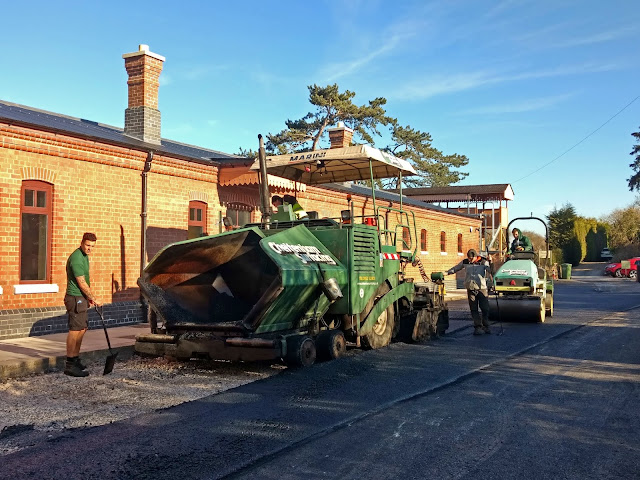 Here the middle strip has been laid, and it's the turn of the last one in front of the pavement. The roller follows closely behind.

It was really good to see the Tarmac go down, after years of potholes, rubble and dust. For a whole operating season little bits of grit were being walked into the booking office and this scratched the floor and often jammed the doors. 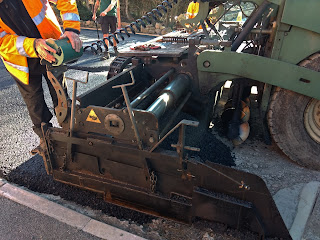 The back of the paving machine was very mobile - it could go up and down, but also sideways, stretching out to meet the kerb exactly. An Archimedian screw propelled the hot Tarmac to the right spot where it was wanted. This part of the operation was controlled by the man on the left. 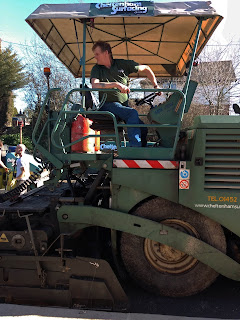 The control desk and chair could be traversed to whichever side suited the operator. Behind him two gas cylinders fed the heating mechanism that kept the Tarmac hot and fluid. 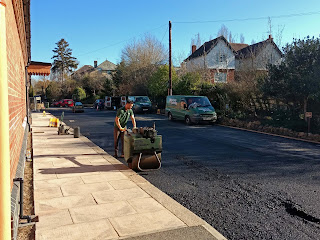 While the Tarmac was still hot, two rollers whizzed about the site to compact the layer. This one did the edges and around the gullies. 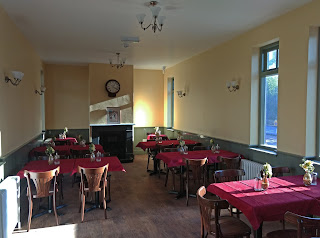 Sunshine poured into the cafe today, where red tablecloths had been laid out, with bunches of flowers on top. Very pretty it looked too. 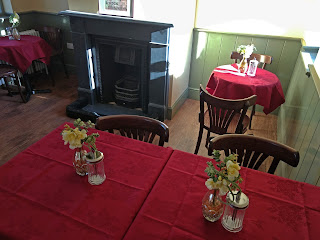 This is the corner by the fireplace. Can you see yourself enjoying a scone and a pot of tea here? Does it look as if it's always been there? We think so. 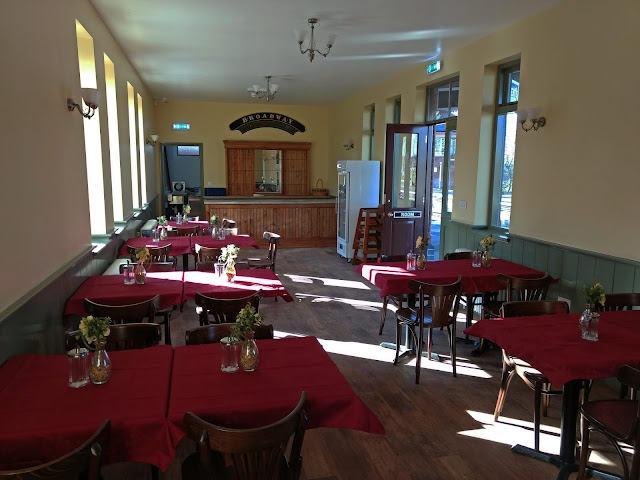 Looking the other way, the cafe is now pretty much equipped. There is a small kitchen behind. The cafe will seat 28 customers. 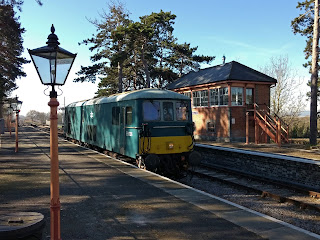 A distant toot announced the arrival of the class 73 light engine - this is a railway station, after all - and it trundled through on its way to pick up the PWay train of Dogfish in the northern headshunt. 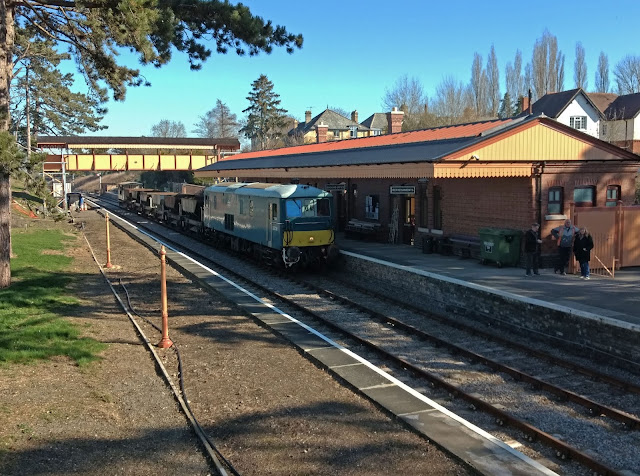 It was soon back with the empty Dogfish, which the loco was taking to Stanton for loading with ballast. This is needed for the Toddington relay.

Note also how clear platform 2 is now. The area on the left will be re-seeded within the next few weeks, before the weeds take control again. 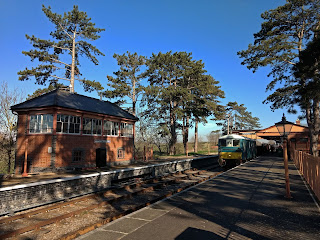 The train stopped briefly in the station for a chat with the volunteers on the platform, before resuming its journey to Stanton. Then all was quiet again. 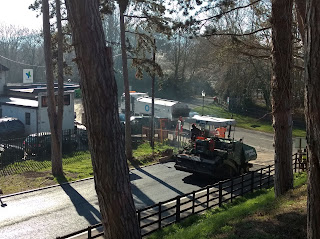 Soon the paving machine was down by the end of the station approach. It's amazing how quick it is, when all is set up and there are no obstacles. 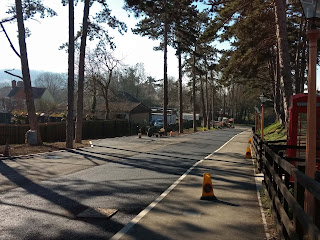 In this view you can see Tarmac right down to the bottom of the road. Everything is covered now, there won't be any more dust. But it still needs the finishing layer. This should include three speed humps, which will also help to divert the surface water to the gullies along the side. After lunch, and given the excellent progress made in the morning, the machine came back and added another layer near the top end, where a bit of a dip was perceived. Then there was even time for a short strip of the finishing layer, which was laid around the gully on the right. 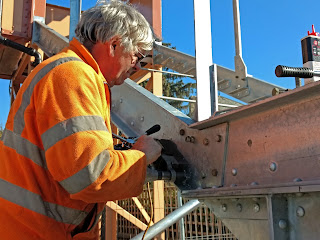 The canopy team spent the day making the roof hoops on the footbridge steps ready for riveting.

Here Neal is drilling out the holes, to make sure that the slightly larger rivets will actually go in on the day.

We have found a compressor to hire at a reasonable rate, thanks to the contacts of one of the Broadway volunteers. 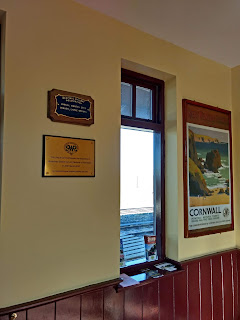 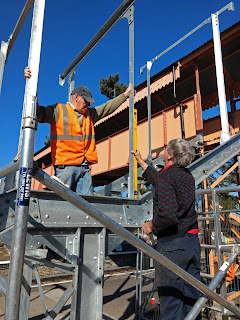 After re-drilling the bolt holes, the roof hoops were adjusted for vertical alignment.

In the booking office, the HRA award plaque has been mounted on a specially made wooden base and fixed to the wall over the opening ceremony plaque. On the right is an original poster board, and two copies of these are currently in production, next to another four for the platform side. 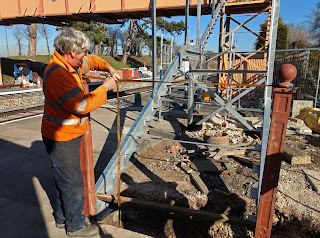 The last job of the day was to straighten the newel posts. You can see that the one on the right was a bit off, but at the end of the day it was straight. 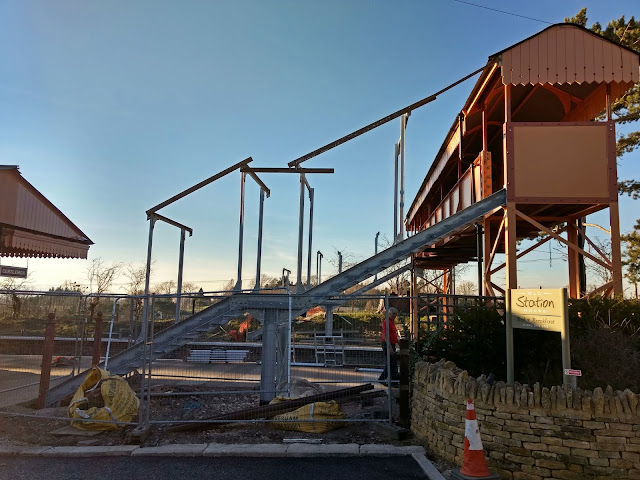 These rather crudely bolted on strips of wood are just there to hold the hoops into position. They will be removed again once the rivets are in and the hoops in their definite positions.

Finally, if you'd like to see the asphalt paving machine in action, you can do so in this video taken today: