- team one went to Broadway to assist the S&T department in threading the comms cable from Toddington to Broadway under the line, and further along, back again.
- team two went to Winchcombe to unload concrete sleepers
- team three continued with the winter relay at Toddington.

Team one reported at lunch time that they had threaded once, and went back to continue.

Team two spent quite some time at Winchcombe yard waiting for the lorry to arrive from the NE with just under 100 second (third?) hand concrete sleepers. 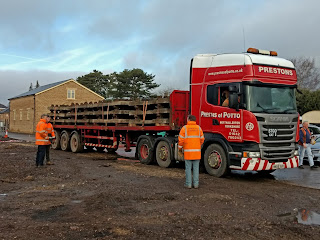 Eventually (sigh) the lorry arrived, having waited in a layby not far from its destination until prodded by its owner to make an appearance. 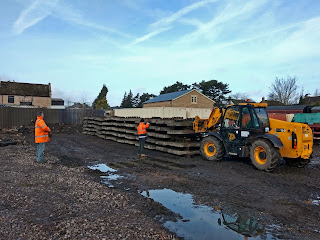 This is the third of 4 deliveries, all ex - NYMR relay.

Some are better than others (the ones we saw were all quite useable) so we are paying 2 different prices according to quality, and will use some on the main line and others in sidings, such as for the new carriage shed. 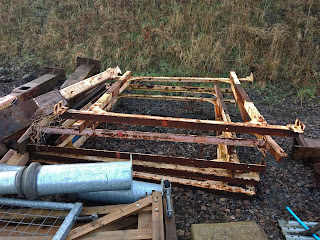 Winchcombe yard also has the original Henley in Arden roof hoops from the staircases. You can see that they are fairly well rusted, especially the lower ends where wood met steel.

We have reproduced these in new, and a start has been made in fitting them at Broadway - see below. 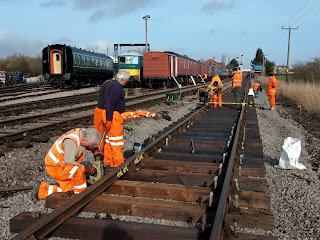 At Toddington there is a seemingly endless number of chairs that need to be bolted down, fishplates to be drilled and Panlocks to be put on - 500 sleepers worth.


The bolts needed liberal applications of black, liquid grease - luckily we had John for that.

Behind, the TB2 is being used to screw down the bolts inserted by the team in the foreground. 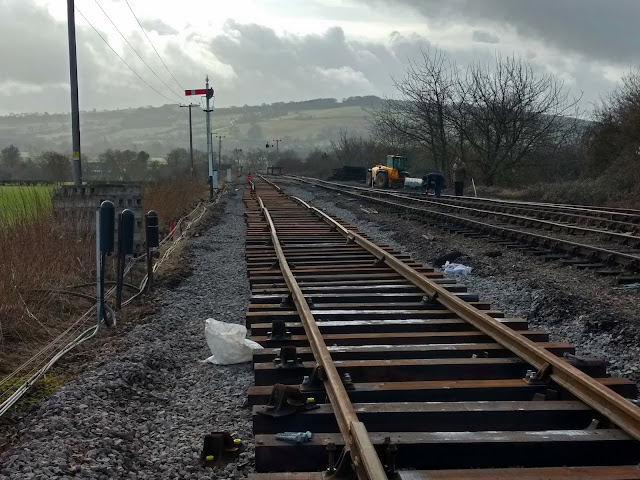 All these rails were loosely laid in on Saturday, and our job was to smarten the whole thing up with the remaining chairs and fishplates.

One last pair of rails remains to be laid. We will do that when we know the exact length required. 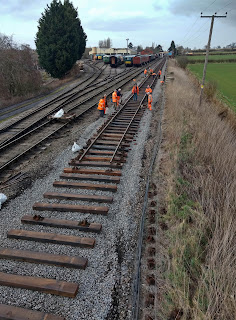 The gap for the last pair of rails is here in the foreground, while at the back is the long section already relaid and bolted up that stretches all the way down to the signal box.

More 25Kg chairs lie in the cess, ready to be shoved in under the rails. After a while they become heavier, strange.

500 sleepers = 1000 of these chairs to be picked up and wriggled under the rails.

Here's one for your scrap book - a view of the loco yard from above. On the right some of the cable troughs removed from P2 at Broadway. 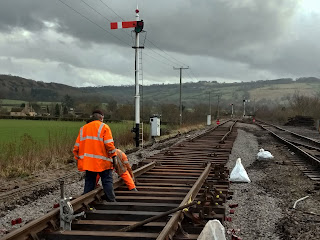 Work on replacing the sliding windows on the signal box was well advanced today. 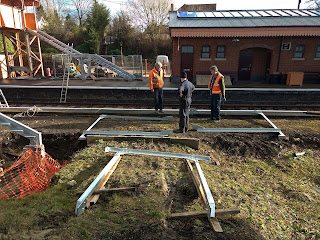 The canopy team, aided and abetted by a member of the Broadway gang, arrived on P2 at Broadway on Monday and peered at the staircase roof hoops.

Which one goes where? 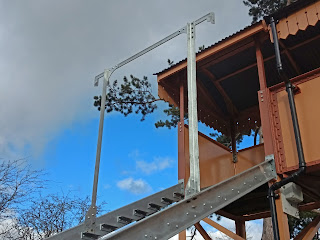 Soon after the first one was up. It's currently secured by 3 bolts on each side, but these will be replaced by proper rivets before we go much further. 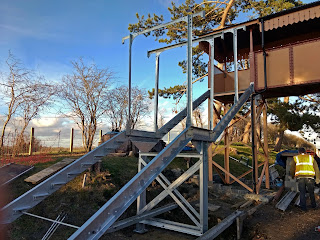 Two more followed, after we worked out in which order they had to go. They all look very similar, but each one has its place, and it was a miracle - or perhaps Neal's professionalism - that all the holes corresponded perfectly. 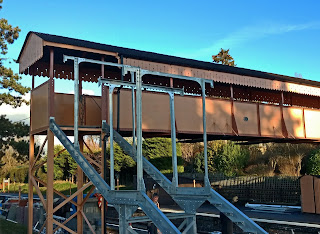 At the end of the day we had three up, with the last and lowest one still do do. It shouldn't take very long, we'll fit that one in when we have a spare few minutes. 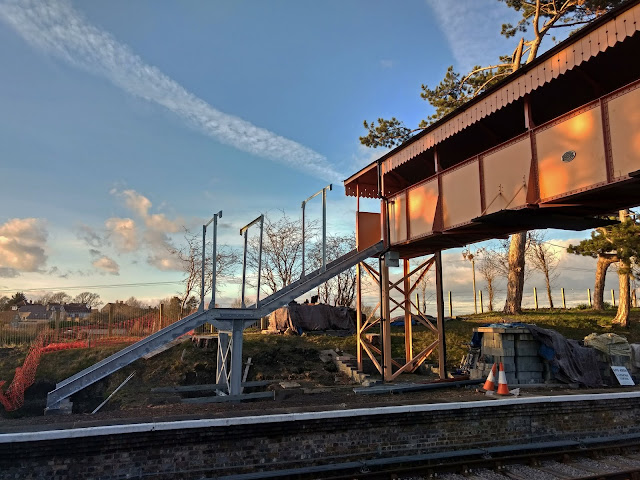 In the golden light of the setting sun you can get a better idea of the size of the staircases.

The two hoops on the intermediate landing are still a bit out of true as we had to use smaller bolts. The holes lined up +/- OK but there was baked in metal after the galvanising and we need to drill that out to make the holes big enough for the final rivets. 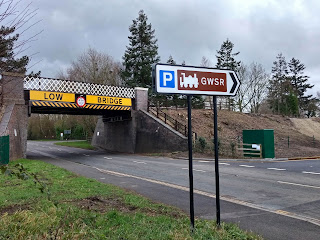 Down by the council car park new signposts have been planted.

Not only can our customers use the car park soon (early March) but we get a free bit of advertising. 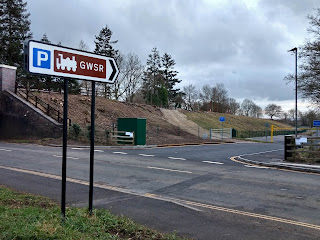 The actual car park entrance is a bit further to the right, it didn't all fit in the first picture.

Lighting and some signage have been fitted. The parking meters are not yet in place though. 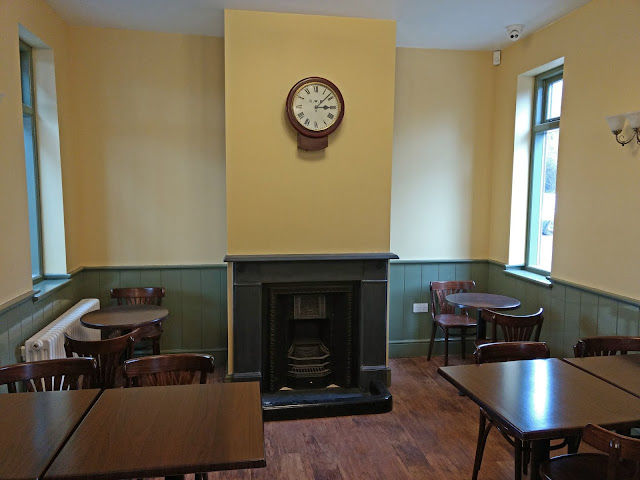 Inside the future Broadway cafe the replica GWR clock has been fitted and it is reported to be running well. It really was 8 minutes past three when the picture was taken!

What would improve the Edwardian look further would be Bakelite sockets and switches. These have been sourced and costed, but the will to spend a few £100 is sadly not there.

The white ceiling and yellow walls should be separated by a moulded picture rail. Our bigger brother the SVR have just done this with their new cafe at Bridgnorth. You can see the effect here:

A picture showing the walls of the recently built cafe appears in the second row of photographs in the above link. Why can't we do that? It is how rooms looked 100 years ago. We have the knowledge. 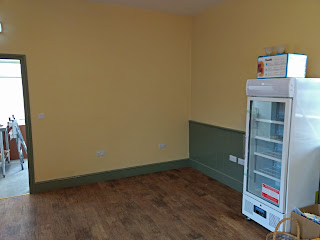 This is where the counter is going.

If you follow the C&W blog, you can see that they are making a terrific job of it, together with a three part wall unit consisting of shelving and a central mirror. Great ! It looks just the part, and it was copied from a photograph of the real thing. 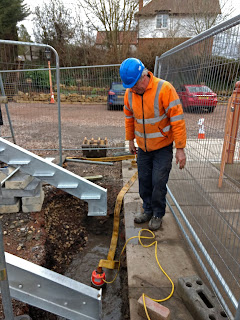 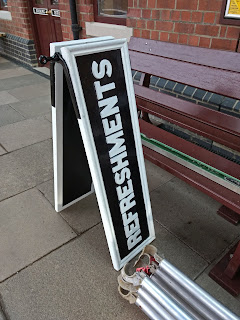 On the platform, the V board announcing REFRESHMENTS has been made up, and it looks great.
Its origin is a board with BOOKING & TELEGRAPH OFFICE acquired at a railwayana auction. The BOOKING OFFICE & part will be re-used for a V board over the entrance, still to be made up. The TELEGRAPH letters have gone into store.

Peter from the Broadway gang is a wonderfully skilled smith who made all the metal parts for fitting the V board in authentic style over the cafe door.

Here the board is getting a test fitting. 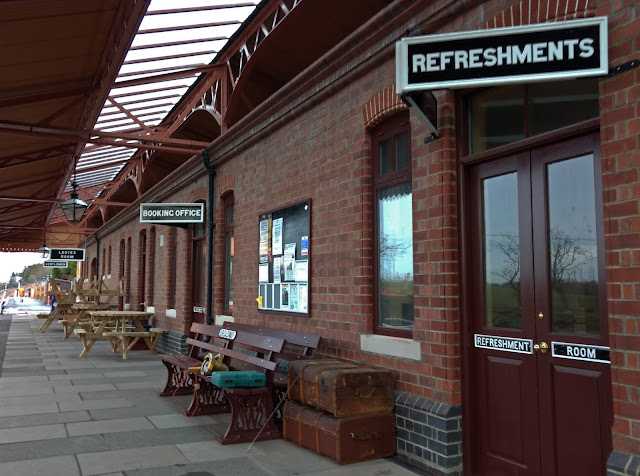 And then it was up. REFRESHMENTS are go! Now you can look down a line of 4 V boards. There will be a fifth eventually, under the new canopy extension. This will say 'WAY OUT' and have a pointing hand to show the way. We have procured all the replica letters for it, it's just a question of getting the new board made up.

Inside the cafe 28 tables and chairs have been sourced, and there are piles of crockery, coolers, tableware et all waiting to be set out. The kitchen has had its worktops fitted, tiling applied and a sink fitted. We are revving up for an opening in March.

More scripted benches like the ones in the picture are also being sourced, after we saw that some arriving trains had full benches and more people waiting around the platforms without a seat. Our new season reopening is not far away now, what will it bring in terms of visitors? Have you tried our new car park and cafe yet? 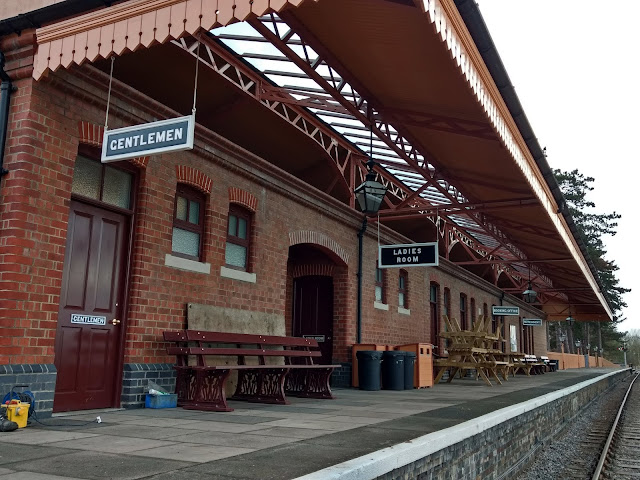 A final look at the station today, showing the new REFRESHMENTS V board in the background.

We should also be able to place some replica posters and poster boards, giving the place more colour. The original station had poster boards in every available space, so we are working on that.