Three of us out today, to attend to two odd jobs along the line.

Today we returned to replace them.

They were awkwardly located just north of Toddington station, with trackside access blocked by two rakes of carriages.

Off to Stanton then, and drive along the trackbed until you get no further, due to the viaduct.

From here onwards we used a trolley to push our kit along. As you can see it was packed. The main item was a heavy generator, which was needed to power the angle grinder that would cut off the bolts. 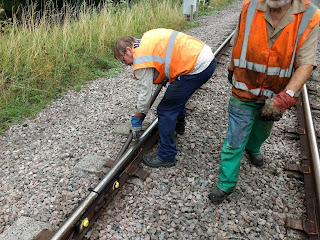 We did 10 of these seized bolts. We've had a discussion about why they seize up before, but they are still doing it - at the Defford straight, in Greet tunnel, now north of Toddington.

Here there are two at once on one fish plate. With the 'hand spanner' we just about manage to wrench the nut off a turn, enough to get the disk in to the bolt itself. We don't really want to cut through the nut as well, it takes ages. 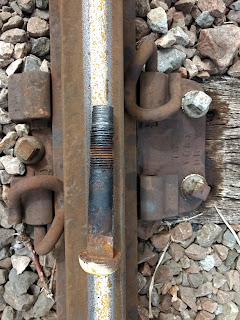 Here's an example of a seized one, taken at random from the basket.

The whole thread on the end has gone. Weird. Can't do that one up any more, it needs a new one. 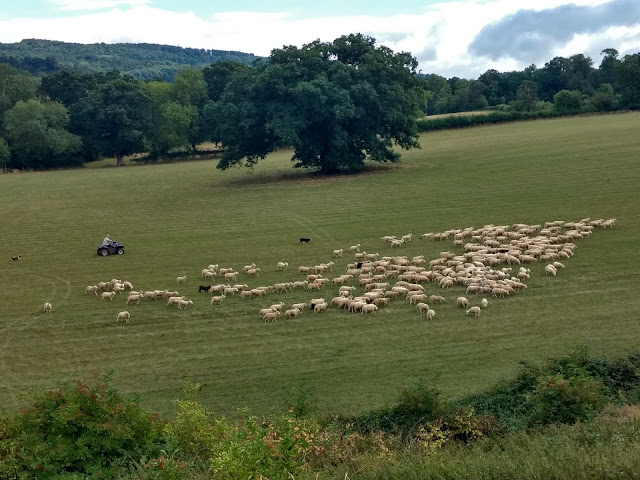 On our way back to the Landie, parked north of the viaduct, we had a good view from above of the field below. Today there was a little spectacle, a shepherdess on a quad bike with three dogs herding sheep.
All the sheep were white, except one black one. How does that one happen?

The roundup did not go well. We twigged after a while that the whole flock was meant to go through a gate bottom left, but here they are racing to the top right!

We left them to it, we had work to do.

Lunch was consumed on a vacant picnic table at Toddington. Star of the show was Mrs. Dave's banana and hazelnut cake. More please !

It was good to be at Toddington, you meet people and hear stuff, you touch base. One rumour wanted that work had started on the Broadway footbridge steps. Really? 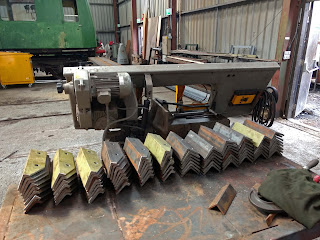 A peep into the loco shed revealed the rumour to be true (just for a change). 96 cleats have been made, and these support the wooden footbridge steps that rise on the two stringers of steel. Other small parts have also been made.

The delayed start of this exciting new stage in the Broadway project was simply caused by paperwork, but it's almost all in place now. Fabrication can proceed! 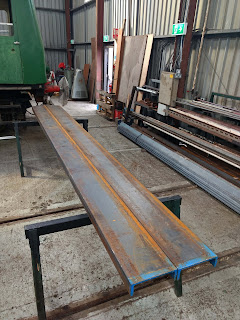 Further along in the shed a start is being made on the stringers.

Each set of steps has two of these, they are the main beams that support the steps themselves. They go up in an elongated 'S' shape, with a flat bit in the middle where there is a platform half way up, itself supported by an intermediate support on the ground underneath.

The stringers of the steps recovered from Henley in Arden were rusted through the web (the flat bit in the photograph), and as such they were beyond saving. The new ones will be zinc plated to prevent such rusting. 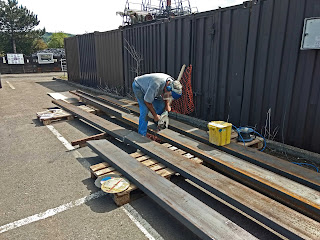 Outside further stringers were being cut to length, with a diagonal cut. Very noisy, but today was a non running day, so no one about. 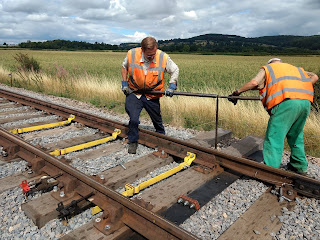 Our little track gang then carried on to the next job, which was to insert a sole plate underneath the turnout that we put into the main line south of Toddington earlier.

It still needs more work on it before it can be brought into use, eg fitting of the point motor. 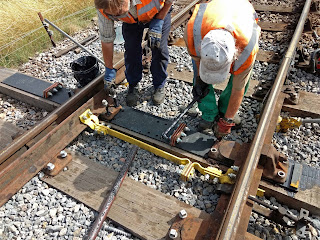 As a delivery of pallets for lighting up wood blocked our access with the heavy machines, Dave and John went on ahead and took the chair screws out with the T spanner.

Here is the new plate in situ, but with a problem still to solve as not all the holes lined up with the chairs. 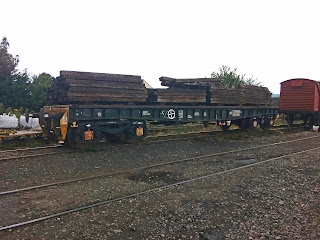 Back home at Winchcombe, the arrival of this bogie flat told us that the used sleepers still on site by the tunnel mouth from the Winchcombe platform extension had finally been loaded and recovered.
Now to sort them into 'good second hand' and 'garden quality'. 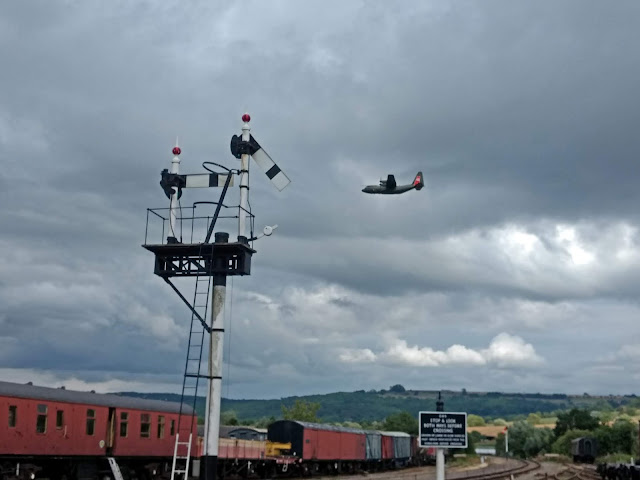 At the end of this interesting day we were thrilled by this Hercules that roared over at minimum height. It seems to be sponsored by a manufacturer of toy bricks....