Stirring up a hornets' nest

Stirring up a hornets' nest - what's he on about?

You'll have to wade through the usual news first. 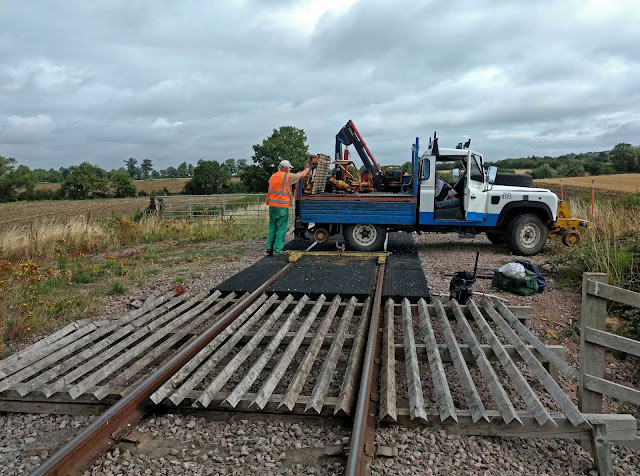 We made a determined effort to complete the fishplate greasing north of Toddington today. It's not that there was that much to do, but it's a very awkward site to get to. With today being a non-running day there were two rakes of coaches in the platform, so the only access was via Stanton and then a long push.

Here we are at the farm crossing below Stanton, a good place to unload the heavy TB2 machine. 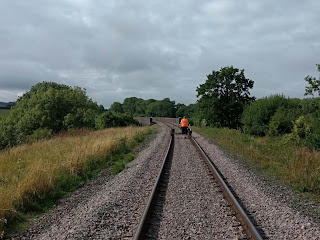 We then headed south, under a possession. The trains weren't running, they were being washed. People often remark how nice our coaches are, and this is one of the reasons why. We are very fortunate that we have a team that does this. 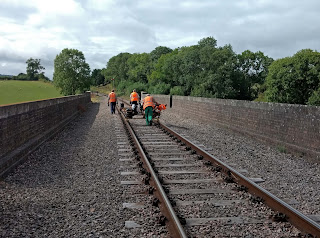 The usual small gang of 3 was augmented today by the most welcome arrival of Mike. We had a change of MO too, and today decided to use just the one machine, to both undo and tighten the bolts on each plate. This took slightly longer, but was much simpler.

At the end of the day we had done Toddington North to the breather, the start of the CWR towards Broadway. This means that the stretch between the breather and the Greet end of the tunnel is done. If all is agreed we propose to work south from there next time. It won't be next Monday though, as that is a bank holiday and trains will run, even on our usual rest day of Monday. 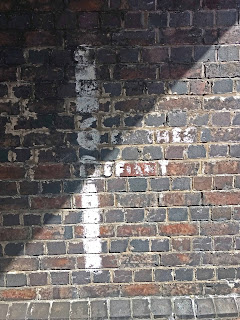 While passing trackside through Toddington we noticed this interesting inscription on the abutment of the bridge.

Can you make it out?

A loco stop mark from some past event?


After a picnic lunch at Toddington we checked out a loco crew report of a noisy turnout, and there were indeed a few defects such as loose chairs and fishplates that we could sort out. That's for another day though, perhaps this Wednesday. 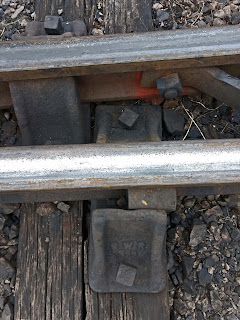 For collectors of GWR cast iron chairs, here is also an unusual one. It's extra small, so that two can fit on a single timber. It's stamped GWR and looks old.

In the Toddington area there is a lot of curious stuff from the very early days, and this is our oldest stretch of track, being laid first in the 1980s, with second hand stuff from all sorts of sources.

Some of it is now getting life expired, and will be the focus of our winter works at Toddington this year. 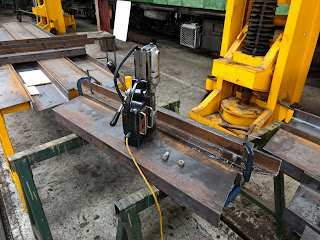 During lunch we had a quick peep into the loco shed. There were just 2 cars parked outside it - Neal's and John's. Both were working on the steps.
Today work was focused on making the longer cleats for the landings. The cleats were cut to size, and in this picture you can see one being drilled for attachment to the stringer. 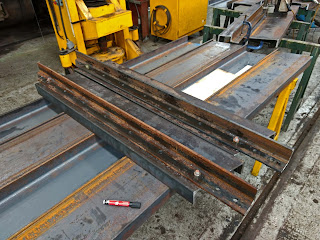 'Here are two we did earlier' they declared with pride. 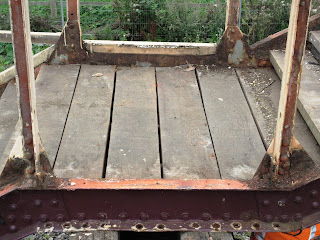 This is the same piece of stringer on the original from HIA. The row of rivets at the bottom is where the cleat is that was manufactured new today. You can also see how the landing stringer was attached to the two longer, angled ones, left and right. As you can see the treads are made of wood and were found to be in such good condition (also very heavy, a good sign) that we kept them for future use. 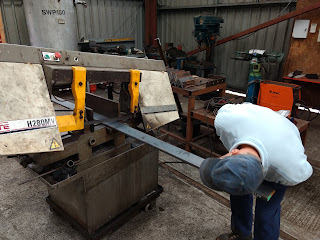 There was only time for a very brief look at progress today, so we can't say what it was that they were cutting here. It was long though, the other end went out of the open door, and it was heavy too, your blogger was immediately roped in to help lift it. And he only stopped for a look.

We finished off the last few fishplates at Toddington north, loaded up the Landie and headed for the exit at Stanton yard.

Last week we noticed that the container was ajar. This is the old, leaky one we used at Hayles and today there isn't much in it, just Stevie's fencing material. If the door was open, that must be because Stevie preceded us and was working somewhere down the line. 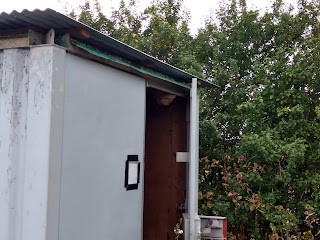 On Saturday we heard the true story behind the open door. Stevie had stirred up a hornets' nest, a real one too! While making his escape, poor old Steve was stung 3 times. 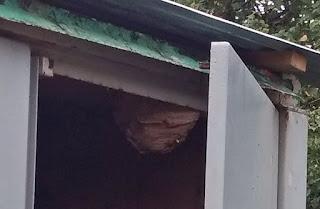 Very, very cautiously we approached the open door and peered inside. And there it is! A classic, cone shaped nest, bigger than a football. The little dot on it is a hornet just going home at the end of the day.

And no doughnuts with us on Saturday either. It was a hard week for Stevie.

BTW, a further lot of photographs from John Lees' collection has been scanned, cleaned and posted on the 'Early GWSR' Flickr site. You can see the next lot here: