Back to a proper strength gang today, welcome back Leigh and Mike! With a decent sized gang of 12 we can achieve a lot. 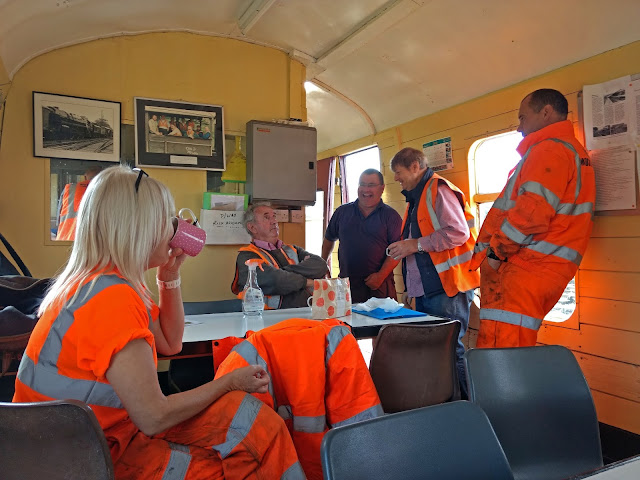 Stevie was back on top of his game, as he is delighted either by the return of David and Diana, or a full bag of doughnuts. Paul and Jim know the truth... 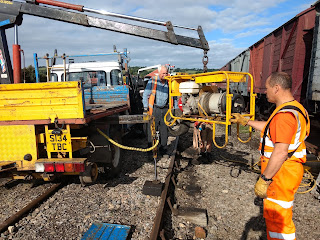 The job for today was to continue stone blowing all the dropped joints at Manor Lane, but an urgent call came in to see to a new dip just north of Laverton bridge.

We loaded up the stone blower using the Landie's little hydraulic crane. Handy thing, it is. 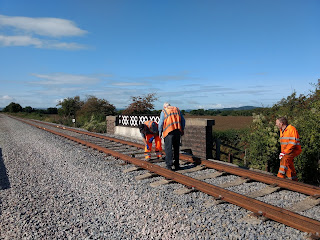 Then to inspect the site at Laverton.

Here it is. Can you see the dip? No? Well you need a track gauge to see it, but we found it OK.

It's more obvious when you are on top of a 100 ton locomotive. 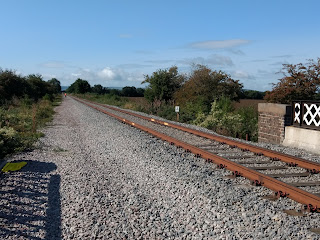 First we sent a flag man some considerable distance away with a flag to wave at approaching trains. See him? He's right at the back there.

Your truly was second flag man, nearer the work site. 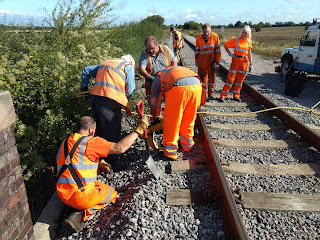 We had a supply of new stone blower's ballast today. It was nice and small, just as it should be. How far would it go under the sleepers if we blew it in from the end? We did an eye level test. 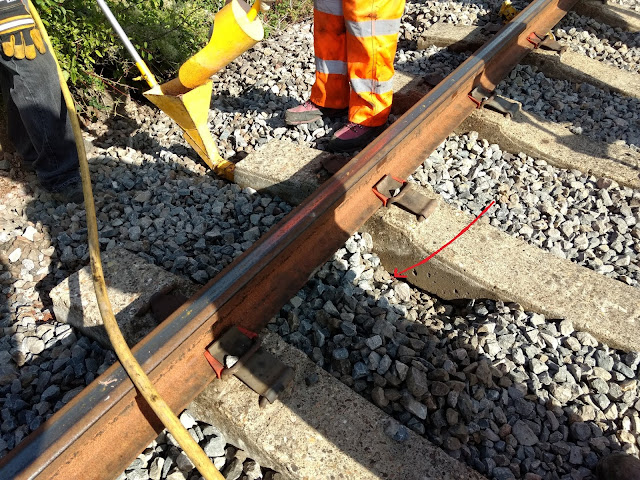 The result was spectacular! We dug a second hole in the 4 foot to see if it got that far. And it did, brilliant. The red arrow shows where the stone blew out again about 3 feet further along, just
what we wanted. 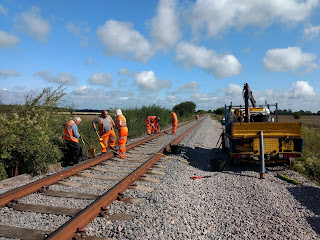 Now aware of what our new supply could do, we opened up all the sleepers ends over most of a length. We did the Malvern side, and for good measure, a few of the Cotswolds side as well. 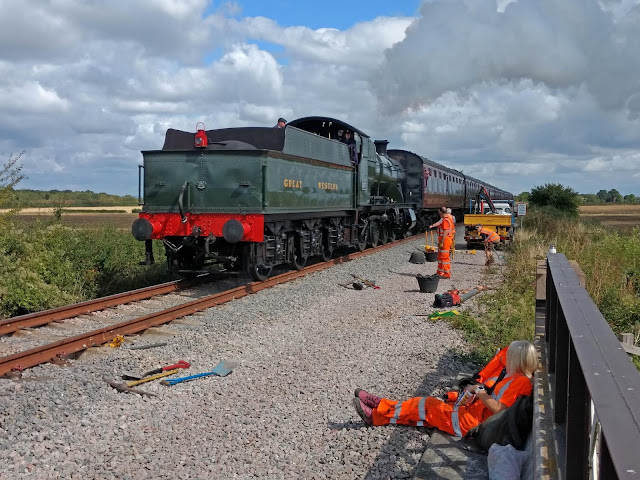 Then we watched 2807 do a run over our work, and we were happy to see that there wasn't any movement.
Diana found a great place to relax, with a bag of crisps and a mobile phone. What more could you want? 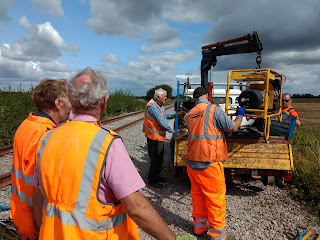 Job done at Laverton, we loaded up the stone blower again and headed for the mess coach at Winchcombe for a light lunch. 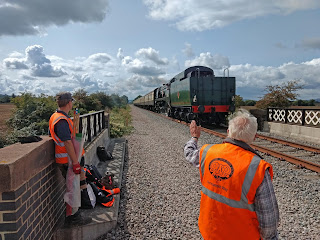 But not before a final candidate to test our track levelling capabilities - 35006 P&O.

Luckily, we passed. Got a friendly wave too. 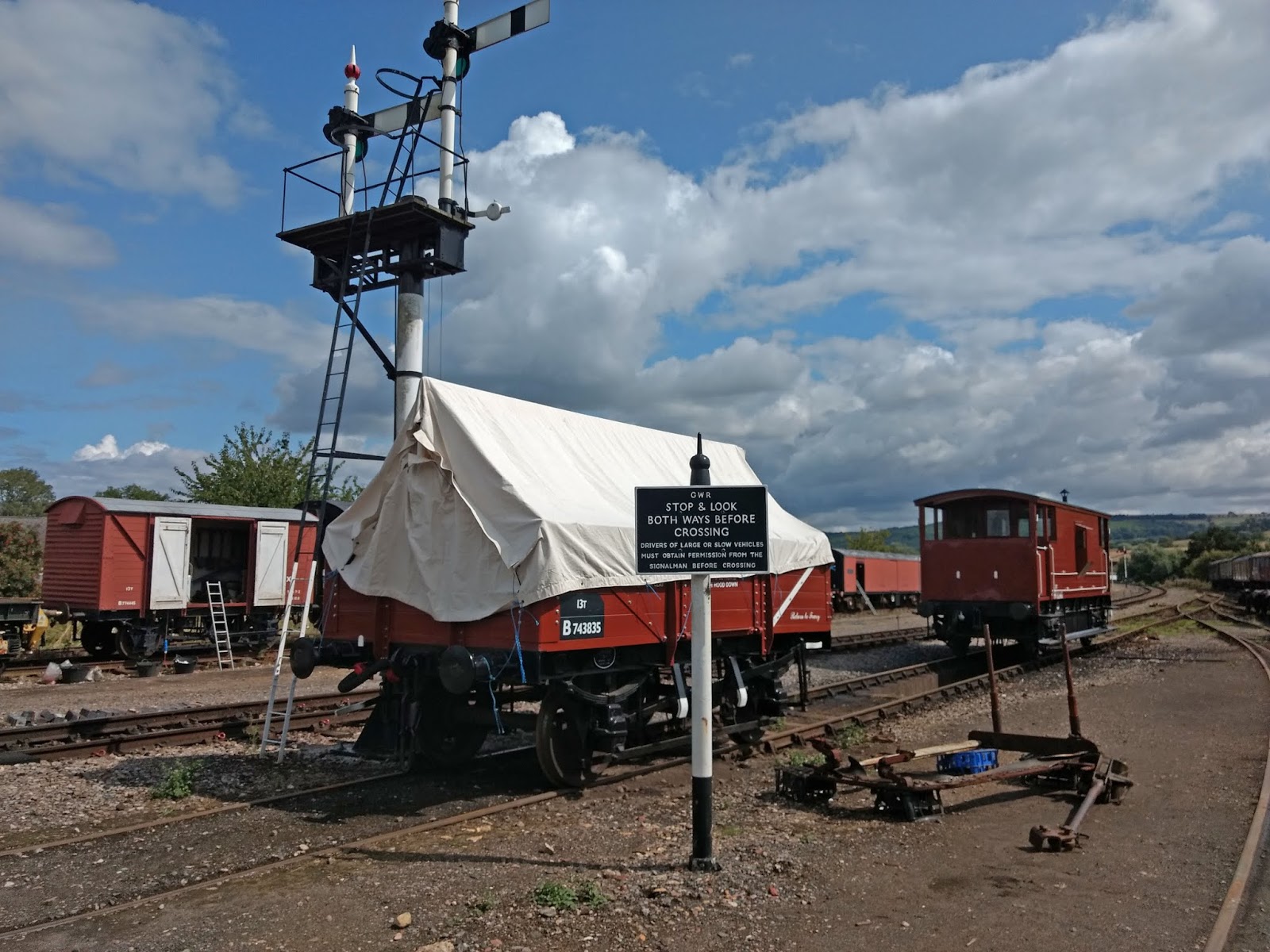 We drove south and stopped at Winchcombe, noticing that the Fowey china clay van now sported a smart soft top. How clever - that's authentic, and also protects the bed from water ingress and decay, as we haven't got anywhere to store these restored vehicles once C&W have outshopped them. 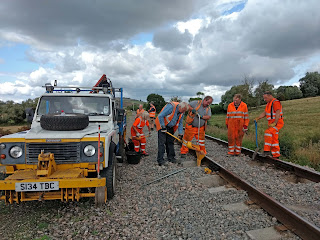 After lunch it was our second job, or otherwise the one we had originally intended to do.

It was another stretch of stone blowing at Manor Lane, Gotherington. There is a very long stretch of dipped joints here, caused by stone that was too large (and easily compressed) used when this stretch was relaid. 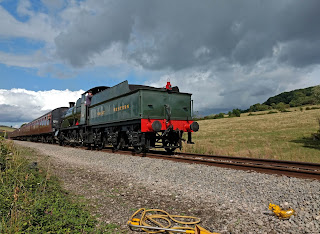 As it was bank holiday weekend there were no fewer than three steam hauled trains out today.

Here is 2807 just about to cross the site. We've downed tools for that. Sometimes that is easier than flagging the train down, when you have reached a natural pause anyway, such as when you have just finished one fishplate and are about to move on to the next. 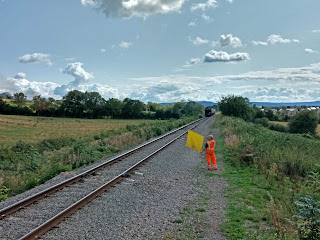 Although you could see the works site from a mile away we had two flag men out.

This is the nearer one, Tony it was today. 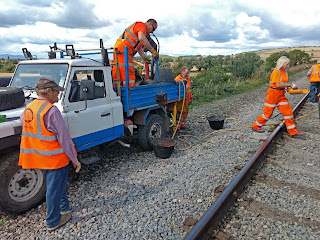 We have to bring our own stone with us, always a squeeze in our little Landie.

Today we had half a dumpy bag full of the stuff, and filled the rubber buckets from above so that Diana and Neil could supply the stone blower from ground level. 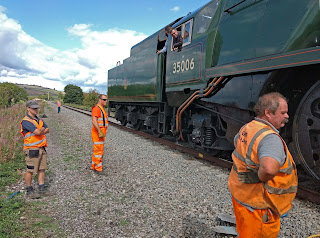 At the end of the afternoon we had done another 5 dips, but still have about a dozen to go before we have done our stretch here.

Our heaviest loco rumbles past and Nigel keeps a careful eye on the sleepers to see if any still move after we have packed them with the stone blown underneath.

Everything seems to be satisfactory.

By special request Neal came to Broadway on Friday to sort out the wood for the 4 ten foot scripted benches we are making. Because these 4 will have to stand outside we needed a more durable wood than those that stand under the canopy. 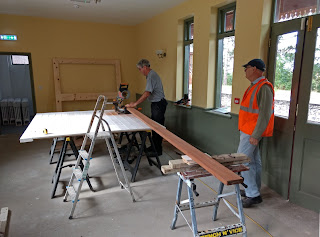 We have gone for Sapele, and it feels very solid and looks like a good choice. We gave the dimensions required for the planks and the feet, but only the planks arrived. They were too long, and there were no feet supplied. This was odd, until we realised that the feet were still part of the long planks and that it was up to us to cut them off.

This was preceded by a lot of head scratching and measuring, until we had the chop saw cutting everything exactly to size. 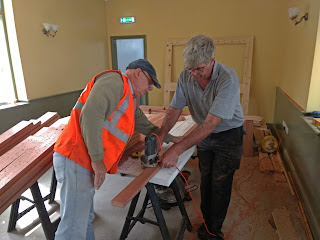 After that Neal got his router out and rounded off all the edges. Although he travelled quite quickly around each plank it took quite a while as there were 16 planks for the 4 benches, and each plank had two sides as well as 2 ends to shape. Then came another 12 feet on top of that.

All the wood is currently being painted. We've taken delivery of 6 of the 12 bench ends and they have now been fully painted. 6 more are expected early September and the 4 new benches should be ready about mid-October at the current rate of progress.

There's a visitors' book in the booking office at Broadway and we thought we'd share one of the many complimentary comments with you:

It is worth taking the care. Quality is never regretted afterwards, and it lasts. It is our duty to show people what our heritage was like, and they clearly do appreciate it. Let's continue at this high level. It's now clear that we can achieve it, and what a wonderful feeling of pride we derive from it afterwards too.

A last look at the car park works below: 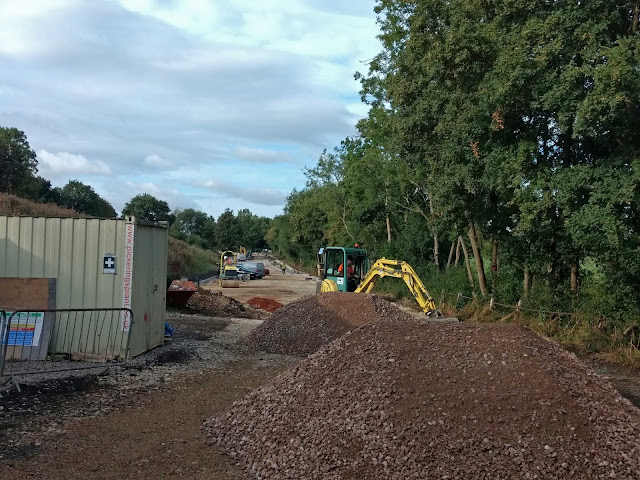 It was humming with activity, and apparently already in use, as there were several contractor's cars parked in the middle of it.