Stones of course, we blew lots of them, a whole Landie full today. We had positioned a dumpy bag of chippings at Manor Lane earlier, and today arrived with the Landie full of buckets which we filled until the dumpy bag was exhausted. 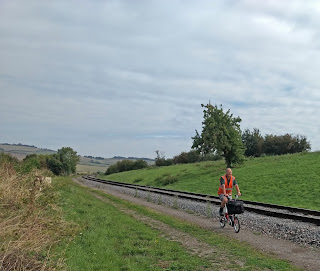 PWay gangers come from far and wide, and any transport is good transport. Peter here has a folding bicycle; let's hope it doesn't fold up on the bumpy track. 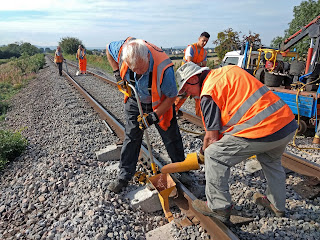 We're on this long stretch between the distant signal and the foot crossing near Bishops Cleeve that is one long series of dips.
We're getting quite routined at this, and managed to get one joint in before the first train arrived - there were no fewer than three kettles about today, all hauling those wonderful fare paying passengers. 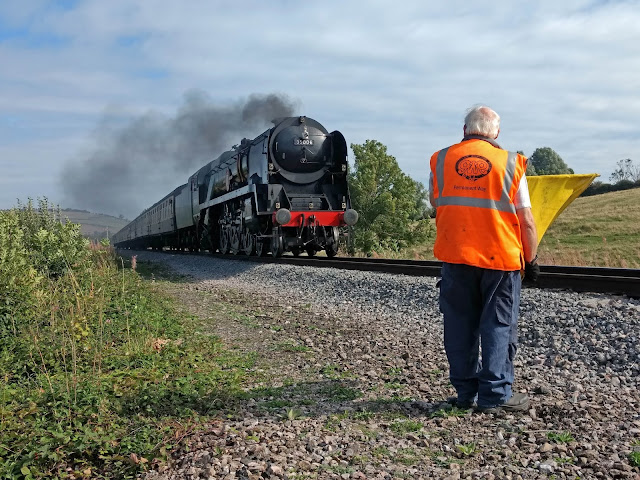 P&O came by very slowly under yellow flags, and it's wonderful to hear that 3 cylinder Pacific open up again after the slack. She's got a lovely beat, which becomes prominent when the driver opens the regulator again. 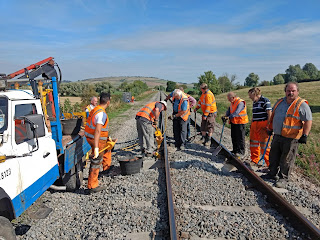 Here's almost the full gang lined up - stone blowers, chipping suppliers, jack placers, ballast shovellers (is there a job for you in there?)

We swap around a bit to even out the use of our muscles. 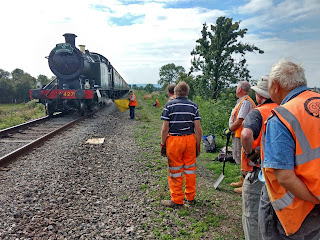 The second kettle out today was that lovely 2-8-0 tank from the Welsh valleys (one of which, No. 4253, will soon grace the Rother Levels and Tenterden bank) and here is sister loco 4270 with a full train of passengers from CRC a couple of miles away. 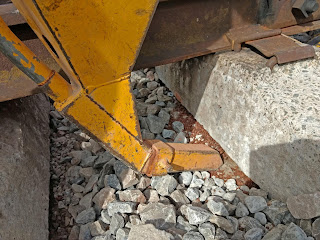 We blew, blew blew..... we had pink chippings today, and when you dig out the last inch or so of ballast to reveal the gap, you discover that someone has been there before you, years ago.

We must have gotten through a large part of a ton of the stuff, based on one dumpy bag full (left empty at the end of the day) 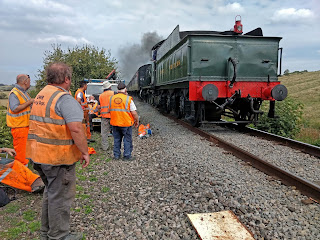 We got a cheery wave from all the loco crews today, perhaps they noticed our work further down the road, and at Laverton last week? 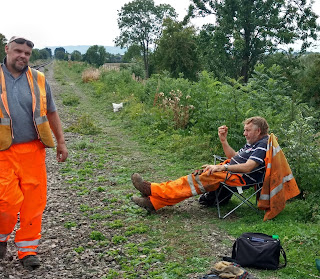 It took a fair old time to get us all sorted and out at Manor Lane with all our kit, and soon it was lunch time. There was nowhere to sit, so we had to picnic where we could.
Steve had a folding chair, and made himself
e x t r e m e l y comfortable. You couldn't get much lower than that.
Your blogger was instructed to explain that this is what you end up like, after 30 years on the PWay. (Steve has 30 years on the PWay)

Relaxed, and eating your second slice of cake... 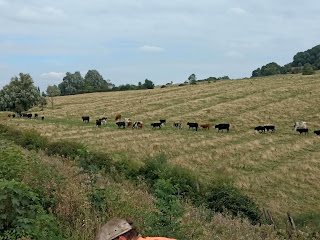 As we sat and ate, a herd of cows in the field behind us did the same. When we got up, the cows did the same.
Spooky...
What made them suddenly march off in single file of a common accord? 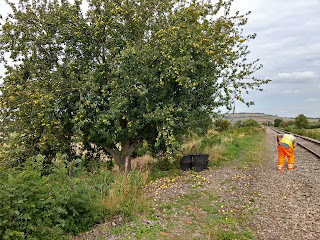 Some of us have second fly-by-night jobs harvesting apples.


What was Bert really up to? Well, as we did at Stanley Pontlarge, we noticed a dip in the Malvern rail over about 15 yards exactly where the tree stood.
This looks like another case of a tree too close to the line. In the hot weather it will have been picking up any moisture in an area the same size as its canopy, thus causing the ground to shrivel.
It's going to be an extra job sorting that out next week, on top of the remaining 6 pairs of joints that we have left to do on this stretch with all the dropped joints. After the foot crossing the track geometry becomes more normal again (and we stopped using the super sized ballast when we laid the track way back) 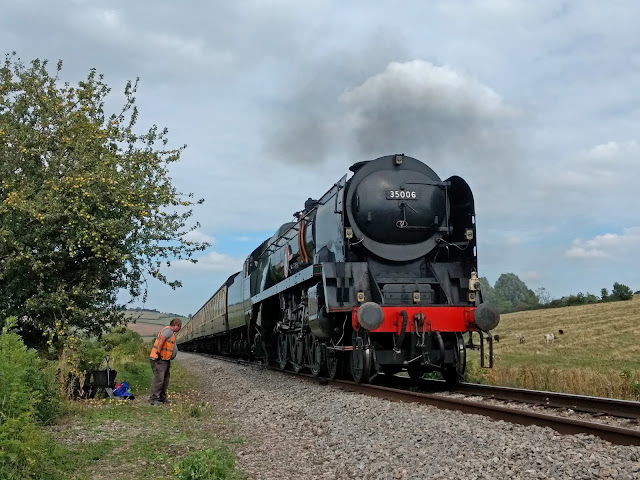 Having spotted the dip, Nigel inspected it very closely to see how it behaved when a heavy locomotive passed over it.

We had to call it a day mid afternoon when we simply ran out of stone. We'll bring another dumpy bag of it next week, to finish off the long stretch, and deal with the new dip by the apple tree.

An early finish on the Pway was a handy opportunity to paint another set of planks for the 4 new benches being made up at Broadway. 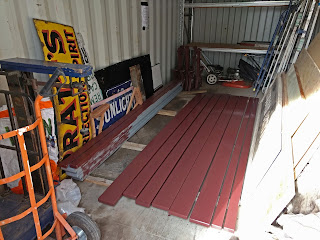 The paintwork has been moved out of the cafe as the floor was due to arrive this week. We're now in a shipping container on a dusty floor. Nonetheless progress is steady, and half the planks are now at the topcoat stage.

There was no room to paint the other half, which is stacked behind and will have to be done later. 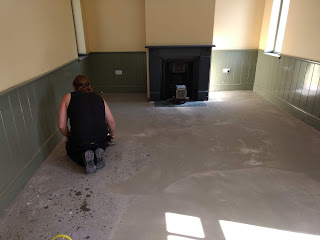 All the left over rubbish has been moved out of the cafe now, everything swept out and vacuumed, and on Thursday a contractor came to give the floor a final coat of levelling compound, which is the bit the Karndean goes on. 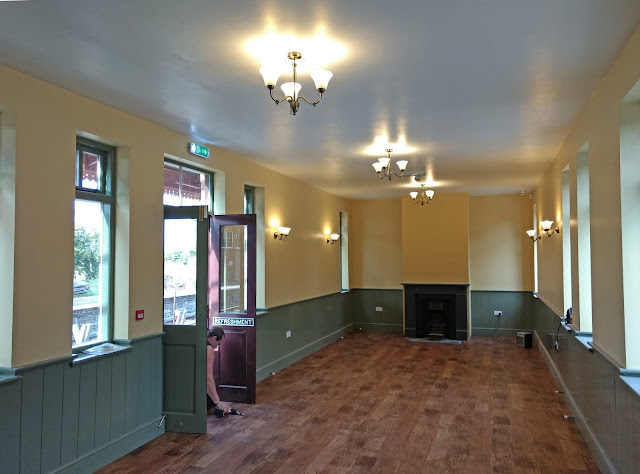 Today, Saturday, the contractor returned to lay the actual floor, and at the end of the day, after skimming a few mm off the bottom of the doors, he had finished. What do you think? This place is going to have atmosphere!

This is pretty much what our cafe will look like now. Still to do are the picture rail, door furniture, and perhaps a clock over the fireplace. We also have some reproduction period posters, and a GWR system map.

The white socket covers are temporary, we have been advised. The counter (behind the camera) is being made by C&W to an old design.

The council car park is rocketing along, you can see what it will look like now. 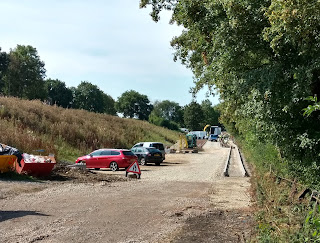 This is the view from Evesham Road. There will be a few spaces front left, then quite a long narrow strip with no spaces. The footpath runs along the right hand side and has a kerb now. 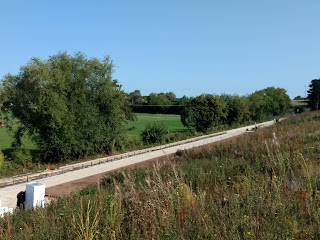 The view from above shows the narrow, single lane channel in the middle of the car park. 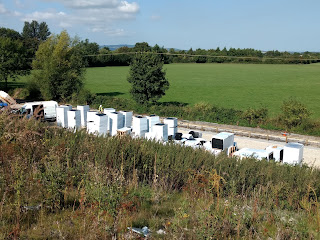 After the narrow channel the car park widens briefly, and it is here that these strange white columns have been stacked.

After a bit of head scratching we worked it out. They contain the porous mats which will form the surface of the majority of the car park, so that rainwater soaks away without challenging the local streams and rivers. 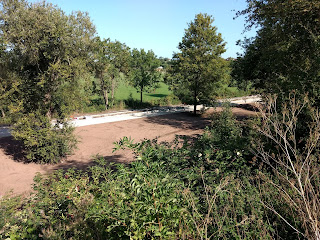 Under the trees there is another landscaped area, here filled with new topsoil. This will now doubt be seeded with grass.

Bring your own picnic! 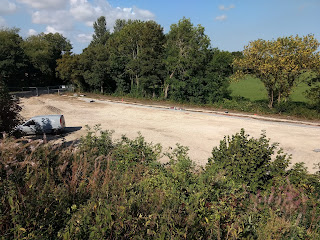 The Childwickham Road end is still in full construction phase, and this will be the main parking area. So from here it's a bit of a walk to the station.

The building of the car park could be finished as soon as the end of this month, but for practical purposes it won't be of use to us until next season, as there is more paperwork required before someone cuts the ribbon. 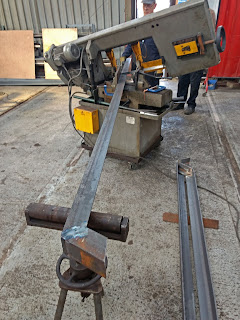 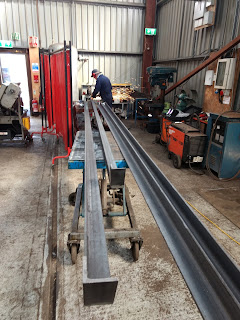 These two pictures show the uprights for the roof being welded (left)  and then cut to length (right). The angled pieces are the bits that attach to the rising stringers. The pieces across have already been made. The actual roof itself will be corrugated iron. It will have two changes of angle in it, accommodating the intermediate landing, so that will be interesting for the supplier. 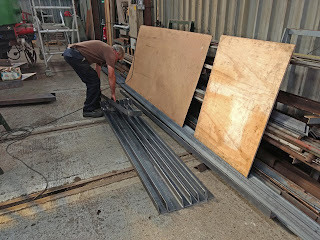 Here the 8 uprights are being stored for a short while. You're always struggling for space in a loco shed, they'll have to move somewhere else soon no doubt. 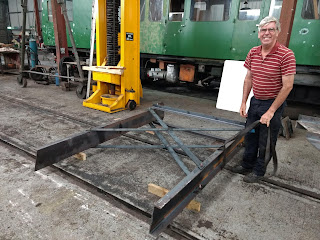 In this picture you can see a beaming Neal with an intermediate landing support that he has just completed (with the help of John, to be fair) 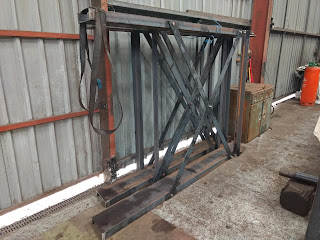 And here is another he made earlier, so that both examples are in fact completed.

There is still a lot of work left to do on the plates that join all the pieces together, with cutting to size and shape, and drilling all the holes in them. 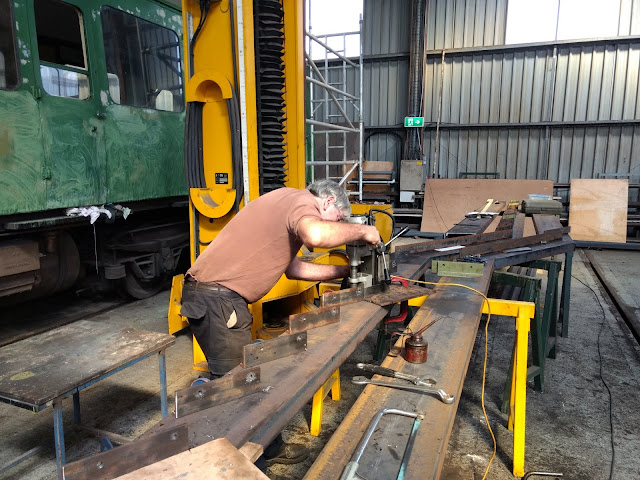 One of the longest jobs was to make the cleats for the steps - all 96 of them. They've all been made now, and in this picture you can see Neal drilling the holes for the rivets which will attach them to the stringers. Each cleat will also be welded right round, to prevent rainwater from getting behind them.

There are no exact dates for the erection phase, but our thinking is that we would like to be able to achieve it during this non-running season, especially as Santa trains will not be extending to Broadway. If we don't manage that, then we'd have to wait until the next non-running season, which no one wants.

After the steps would come the canopy overhang. This will be less work intensive, as it was largely completed during the canopy manufacturing phase. The truss, ridge purlin and fascia board all exist already, but still need modifying.