Tunnel vision (or not)

A good turnout today, about a dozen, which was very heartening.


We even had the visit of Steve our JCB driver, out for a cup of tea and a biscuit, which we provided with a generous smile.

He did have to listen to a few jokes from John though, that is the price you pay for a free cup of tea and a ginger biscuit. 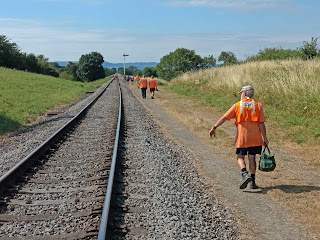 No Landie today, as Paul is very kindly fitting it with a new clutch. It did mean we were without railway transport, so everything had to be taken in private cars, including the grease for the breather we were asked to lubricate. Also the oil-leaking pan jacks....

We set off for Gotherington Manor Lane again, to continue with the faults list from last week. It was a long, hot walk down to where we left off last week. 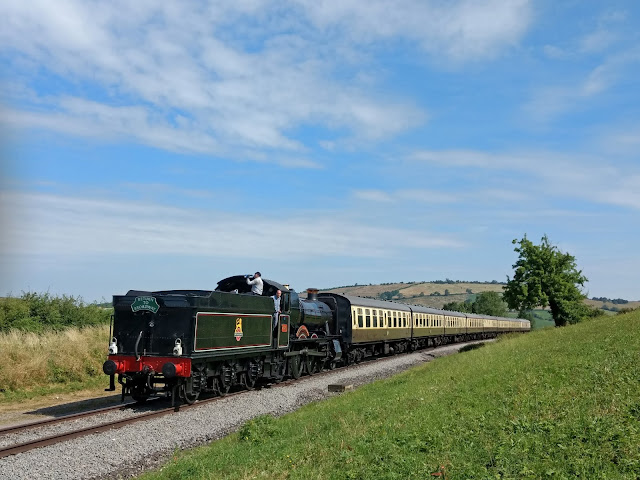 We let the first train ex Toddington go by, to pick its crowd of passengers up from CRC. Dinmore on duty today, together with the DMU. It must have been hot on that footplate. Luckily they were going tender first, you get a nice breeze. 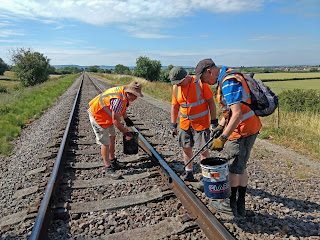 We had a small gang split off with the express purpose of lubricating the CWR breather at Bishops Cleeve. On the way they also lubricated the threads of the fishplate bolts.

That grease.... notice how close the tin is to Peter's leg. More of that later. 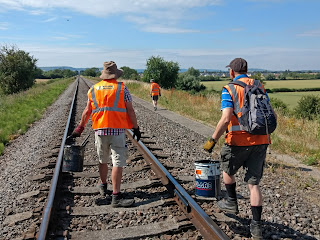 They then set off on the long, straight walk to the next station, where there is a stretch of CWR, with a breather at each end.

Notice the little dot in the top left corner? 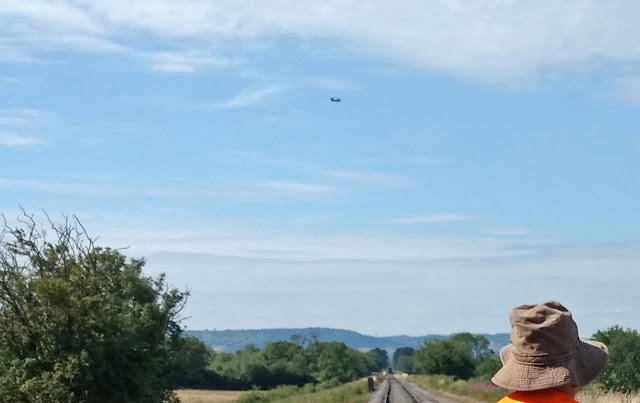 Here it is blown up a little further. It was a Chinook, chop-chopping its way across the sky with that unmistakable sound. A number of transport planes were also seen, there must be a flap on somewhere (as they used to say). 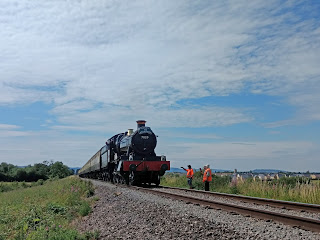 By the time Dinmore returned with its carriages filled with Broadway hopefuls, we were on site and started to find those missing clips, which need to be replaced with new and stiffer ones, or have a thicker pad inserted underneath.

It is an obligation imposed on us not only to acknowledge the whistle of the the loco, but to wave to every child on board (sigh). What is it about waving, but we instinctively all want to do it? 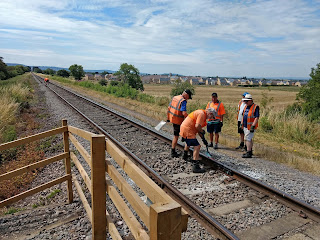 Here we are on a foot crossing, where the ballast is being dug out to place a pan jack.
Behind the little gang is a vast new housing estate, which is marching outwards from Bishops Cleeve  and getting nearer and nearer to the next peaceful village, Gotherington. Bovis, we heard, have already acquired that empty field. 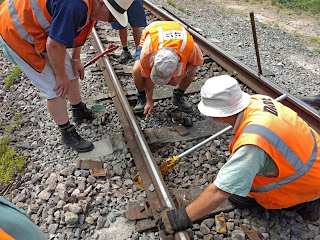 Here's a picture of how we deal with the loose clips, by jacking up the rail, scraping the bed with a screwdriver (putting your finger under the rail is not a good idea) and then inserting an additional rubber pad. This takes up the extra room created by a worn, second hand sleeper. 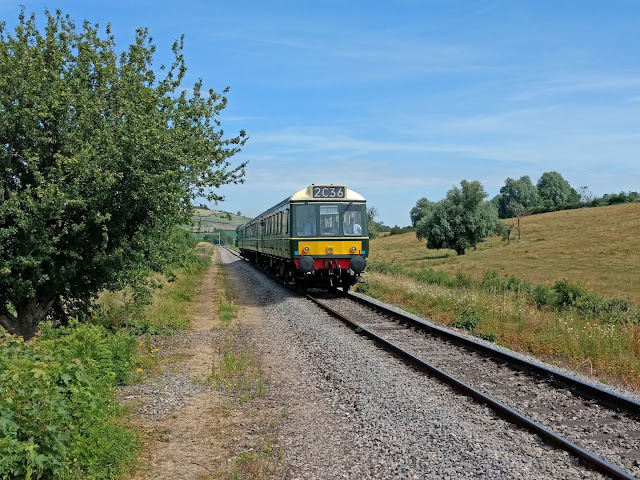 Each loose clip takes about 15 mins, including gathering up the tools and walking to the next one - and in between the second working comes along, our trusty DMU. 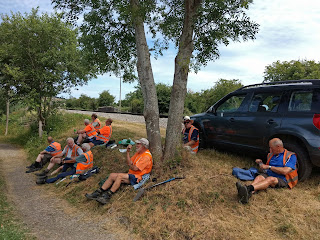 For lunch, we walked all the way back to Manor Lane, as this is where we parked the cars, and we remembered the shady picnic spot from last week. It was great to sit in the shade here. 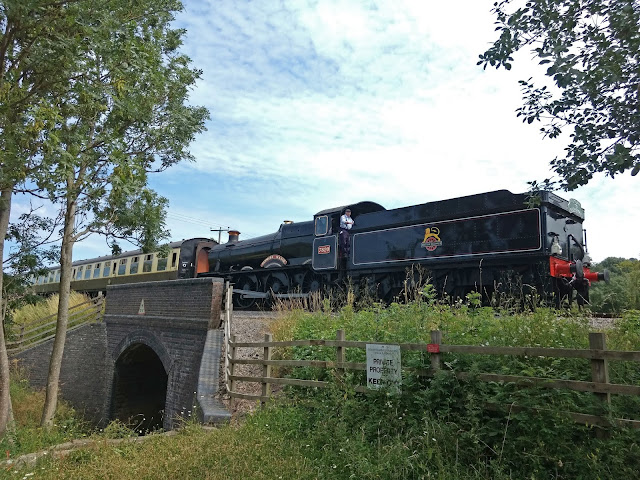 During lunch, Dinmore Manor returned from Broadway, on its second trip to Cheltenham. Here it is crossing the brick built arch over Manor Lane. Brick arch bridges are something of a rarity on our line, most are made of steel by the venerable company of E. Finch & Co, from Chepstow. 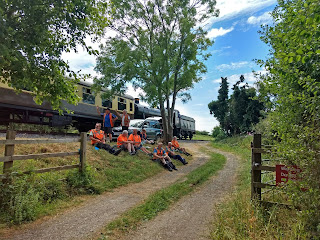 Here is our access to the trackbed from Manor Lane. It sees quite a bit of use, not only from us but also from the Drainage Department, which has been working in the area.


The greasing gang did both breathers at Bishops Cleeve, and walked all the way back, thus completing their 10.000 steps for the day.

The proximity of the grease tin to the user's leg had fatal consequences as you can see. And that stuff spreads all over the body, from the place where it first landed. 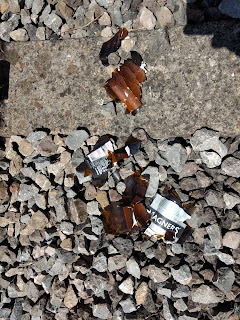 Further along the trackbed towards the new housing estate we found new broken glass in the four foot. This location meant that it could not have been thrown from the train (and we do not sell Magners, nor wine bottles priced at £13.99).

Somebody took them up here. 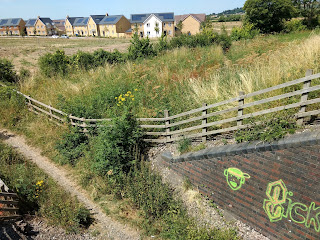 This footpath underbridge has been clean for 113 years. Comes a new housing estate, and we get graffiti sprayed on it. Could the two be connected? 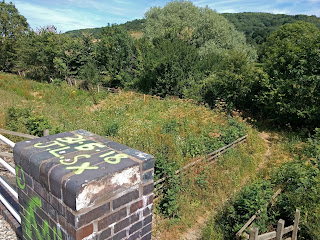 The graffiti was even dated. It coincides with a very unpleasant encounter with local youth here by the drainage gang. 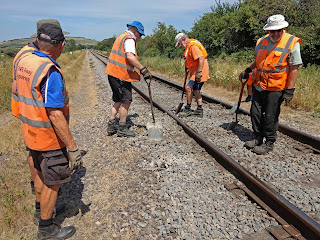 Next to the replacement of clips, pads and plastics we also did some ballast shovelling, removing some excesses so that all clips are visible to our track walkers (and not buried under ballast). This is very hot work on a day like today, when the thermometer reached 28 again. 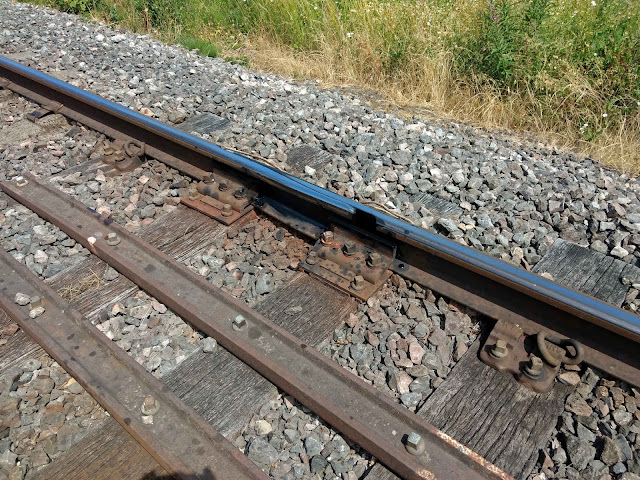 While turning Dave's Discovery at Bishops Cleeve we stopped to have a look at the northern breather of the CWR through the station site. The CWR is coping well and we have no reports of any buckles, neither here nor on the Broadway extension. Quality work. 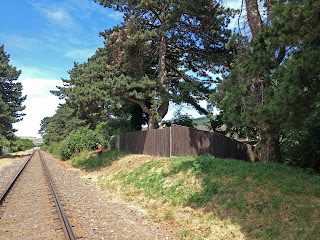 Some of the fences at Bishops Cleeve struck us as odd. This area here (we could be wrong) looks as if a neighbour helped himself to an extra bit of our property, erecting a new fence right around the pine trees that clearly marked the confines of the former station. The centre pine tree is just a few inches inside the fence.

We finished our day with a refreshing cup of tea outside the Coffeepot, where we met David and Diana B of Saturday and Wing Walking fame.
Today they came in mufti, giving their impressive Harley an outing, and thrilling us with the sound of it's thumping 1500cc twin engine.

Our third day of fishplate greasing. Great was our joy to find 5 volunteers in the mess coach first thing, a vast improvement on the three the previous Monday.

Somewhat tongue in cheek your blogger suggested an alternative to working in the unrelenting sun - how about greasing the fishplates in the tunnel? 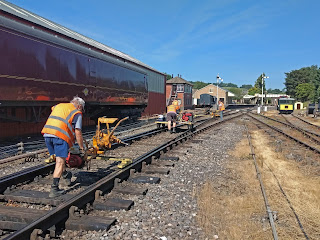 Brilliant idea! We did exactly that, what a good way of avoiding sunburn.

Here we are pushing our 3 vehicles in the opposite direction, through Winchcombe station and up to Greet tunnel at the end of the cutting. 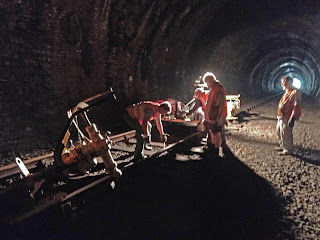 We had the two TB2 machines out as usual, but as it was dark in the tunnel- 'not a lot of people know that' - we had a generator and two lights mounted on the trolley.
Greet tunnel is nearly 700yds long, and curved at one end, so you can't see through it. Quite light at the Winchcombe end, it gets darker and darker as you go in, until you are in total darkness in the area of the curve.

Here you can still see the Winchcombe end in the background. The TB2 in the foreground has loosened the fishplates, and the trolley crew are just applying the grease. At the rear is the second TB2, ready to do everything up again. 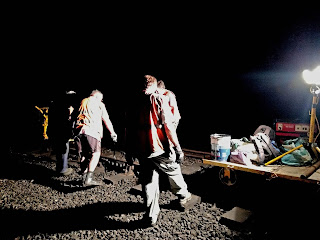 All the lights are around the trolley. You can just about make out the 4 bolts, which Robert is busy greasing here.
Here too we found fresh evidence of trespass, in the form of 3 shiny cider and beer cans of brands that we do not sell, plus a take away coffee cup, all together in a pile that would look much more scattered if thrown out of the window of a moving train. 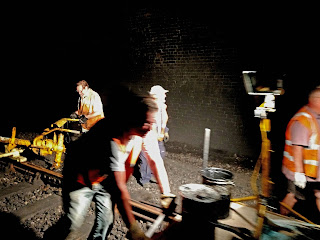 While the trolley crew move on, Dave on the second TB2 tightens the fishplate bolts again.

Aren't these smartphone cameras flexible? These pictures, albeit a little blurred, were taken in the depths of the tunnel, and without flash. 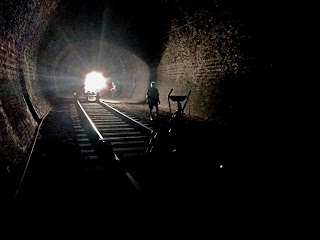 The leading TB2 machine was always in the dark, so finding the fishplates and then the nuts involved a lot of guesswork. It was 60 paces from one fishplate to the next - we had welded some rails together. After 60 paces, you stopped pushing and groped around in the dark.

Here the leading TB2 is a silhouette, with the light equipped trolley just arriving from the previous job. We're right in the middle of the curve, so there is no light visible at either end. 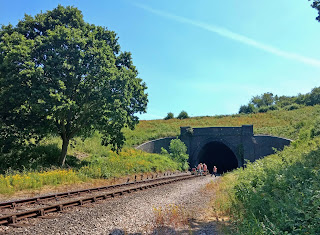 Because of the longer rails, we worked ourselves through it in one direction in only an hour or two. We then emerged at the Greet end of the tunnel, where we ate our picnic lunch by sitting on the trolley, which we parked just inside the tunnel to profit from the shade it gave.

In May 1988 the same spot was occupied by the pioneers that laid our GWSR railway, 9 years after BR lifted the track. They had just emerged from the tunnel with the track laying train.

Wanna know who they were? Well, here goes:

Lurking in the tunnel is a class14.

Believe it or not, two of this happy group are still regular volunteers on the track gang today: Steve Long, and Ivor Dixon. Garry Owen, former HOD, drops in to help in the mess coach too. Not forgetting John Lees, who took the picture, who is also often found out on Saturdays still. 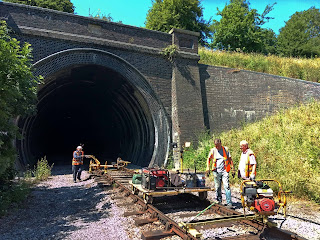 After lunch, we worked our way back through the tunnel doing the other rail, and mid afternoon our little gang of 5 emerged again at the Winchcombe end, blinking in the bright sunlight, and somewhat greasier and blacker than before. 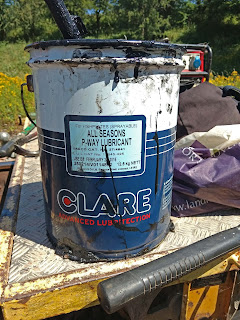 Greasier and blacker? It's because of this 'Advanced Lubrication'.

And we thought it was just oily black stuff. Boy, it sure gets everywhere, no matter how careful you are.

Afterwards you have to drive home... 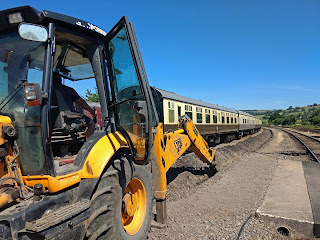 Back in the PWay yard at Winchcombe, we found Stevie digging a trench for a replacement communications cable.

This is an interesting development. Why the new cable? Because the siding with the 3rd rake on it is going to be completely relaid and (partially) straightened. The old cable ran an irregular path and would be in the way. The siding improvement is for C&W who want a proper running stock siding, on which they can do light maintenance without having to lie in the dirt, or scrabble around for water and electricity.

The relay has nothing to do with the possible location for a carriage storage shed, the site of which is being discussed at this very moment. A recent investigation looked at siting it on the other side of the running line here, at the back on the right and reaching right to the gates of the yard, where the decrepid stock is currently parked. This would give a full 8 coach length, and on firm ground. Other factors also play with the location, and we await the final decision.

A further fishplate greasing session will take place on Monday (perhaps combined with the replacement of 6 bolts in the tunnel while we have a possession) so do come and help.