A drop in temperature to 24 degrees today, and a large turnout of 15. Brilliant. A small contingent collected pallets from Toddington with the Telehandler and had a meeting about the Usk operation, the rest headed south.

Your mission for today - should you chose to accept it - was to change two sleepers above an infilled occupation bridge, too big a job with what we had with us last week. The location was near the playing field south of Bishops Cleeve. 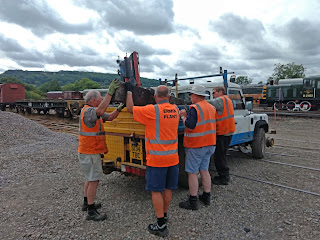 We needed to take some second hand sleepers with us - we have no stock of new replacement sleepers and sort of wrangled these into the tiny load space of the Landie.

For this sort of work the Landie we have is really too small, and in addition we sold a Transit a few months back, a vehicle that hasn't really been replaced. We have put up a proposal to invest a second Landie, but one with a longer wheelbase. Let's see if this one flies - we hope so.


So, two spare sleepers were manhandled into the back, together with the tools and a small drum of oil. The sleepers hung out over the end flap, but we got there OK. OK, if you don't count the small drum of sticky black oil getting pushed over by everything that was crammed into the back. Well, we needed to lubricate the back end anyway, the rail wheel mechanism is all dried out at the back. 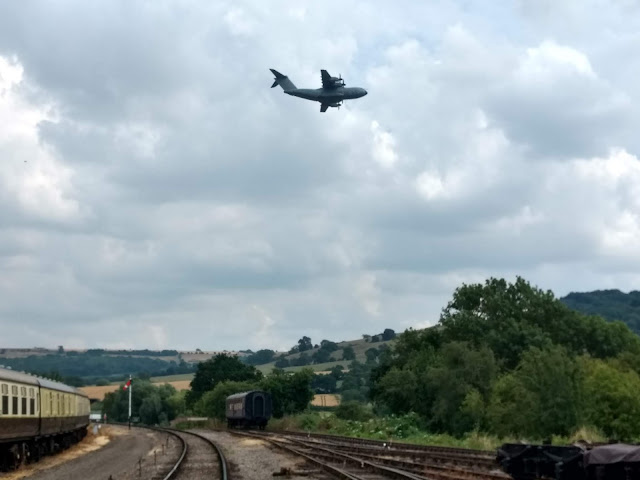 One of those A400 thingies flew over Winchcombe on Monday. Aren't they noisy? They make a sort of howling sound.
Check it out here, on the Mach Loop:
https://youtu.be/URSit14R9OE
If you don't know what the Mach Loop is, it's a mountain pass in Wales and if you stand there, they fly right over your head. Or else at Winchcombe..... this one also turned on a wing tip.

Anyway, we all piled into our cars, the little Landie and Dave's Disco, down to Bishops Cleeve, and then further along the trackbed to where we left off with fault finding (if you know what we mean) last week. 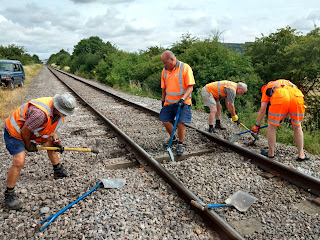 This is a stretch of concrete sleepered track, with half a dozen wooden ones on top of the infilled underbridge. Two had a big orange cross on them, that means they have to go.

First, dig out your sleeper. 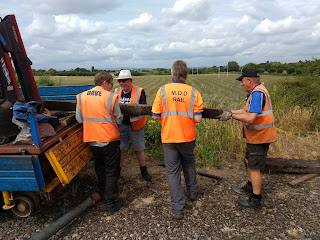 Then get the 'new' one (the least bad one of the second hand stock we have) and because we want the best one to go in, of course Dave selected the heaviest. He would, just typical. 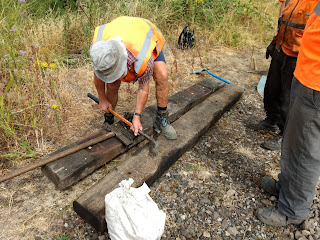 The 'good' second hand sleeper used to carry a GWR throughbolt type chair, so had two holes in it (instead of 3) at each end. To avoid the rain getting in and accelerating any rot, we plug them.

John is a dab hand with these plugs. This one was a bit too small, so he half split it, then wedged a piece of oak sleeper into the split. Then it fitted beautifully (assisted by a keying hammer of course). 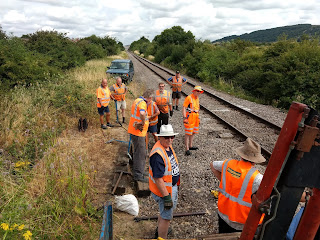 When we got to Cleeve, we could just hear the first down train disappear round the curve towards CRC. Half an hour later, it returned, filled to the gunnels ( we hope) with paying passengers.

The gang stood to one side to let the train pass.

Can you see it yet? 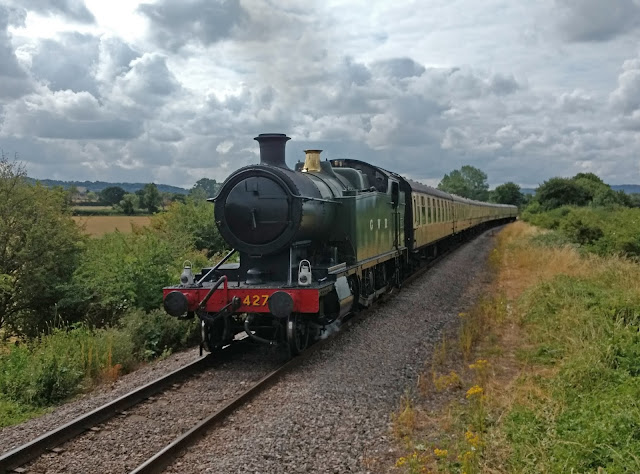 It was hauled by 4270, back with repaired wheels and doing a good job with our 8 coach rake.

You can see all the cloud we had today, but it still felt very warm, and muggy. But no rain, alas. 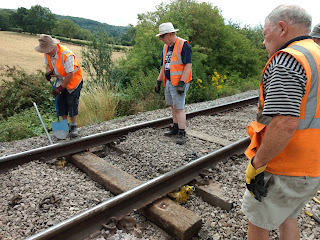 Here's the 'new' sleeper already in its place, things went satisfyingly smoothly today (they don't always do that). The second did not take much longer, then we heaved the rotten ones into the back of the Landie and drove further down the trackbed to the start of the Southam curve, where we left off last week. 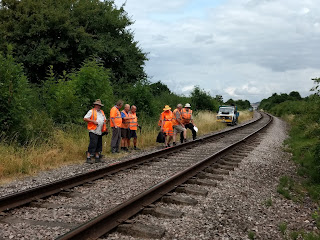 Time to let the DMU pass first though. At the end of the straight here is Bishops Cleeve, site of the former railway station and now a housing estate. 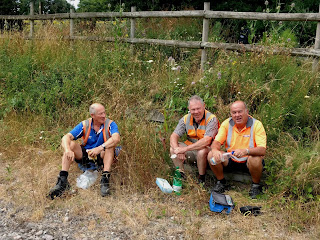 Lunch was taken al fresco (al warmo?) by the foot crossing, where a few lucky ones found a drainage lid, or an upturned concrete sleeper to sit on. The others perched on the grass and hoped the insects weren't biting.

John looked the most comfortable among us, but maybe leaning against it isn't the true purpose of the sign here. 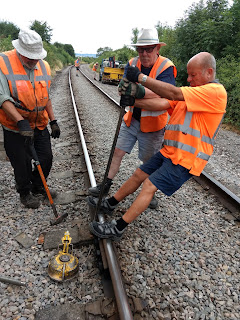 The rest of the afternoon was spent changing clips, brittle plastics, and doubling up on rubber pads, some of which had gone in too thin when this was laid, allowing the clips to shimmy out eventually.

Martin put his life and soul into getting stubborn clips out, assisted by a more cautions John R.

Heard the one about the multi story carp ark? Yes, yes we have. 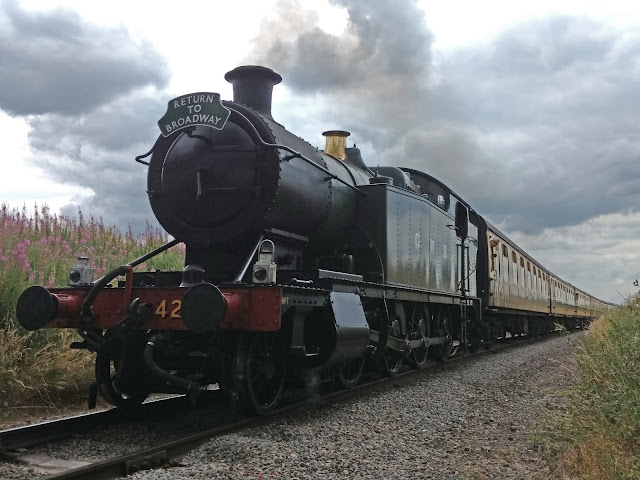 On its second trip out of CRC we met 4270 just about to pass under Southam Lane bridge.

This is the exact spot where a car somersaulted on to the track a few years back, landing right in front of one of our trains as it came round the bend. Every day has some surprises, but the driver didn't anticipate that one. Who would have thought of that? 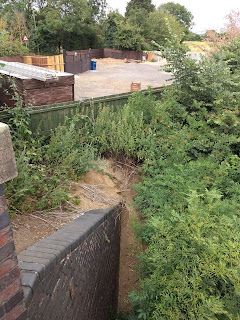 Up above the bridge, evidence of a neighbour adding infill to extend his property into our cutting - the infill here has overwhelemd the end of the wing wall.

The railway is aware of this.


On the way home, we stopped at Jonathan's house nearby. Jonathan had a useful bit of free kit for us, a second hand petrol powered disk cutter.


Then, back at Winchcombe, a strange pair of legs just inside the outer carriage shed.

Surely this can't be possible, there is a corridor above where these legs are standing? 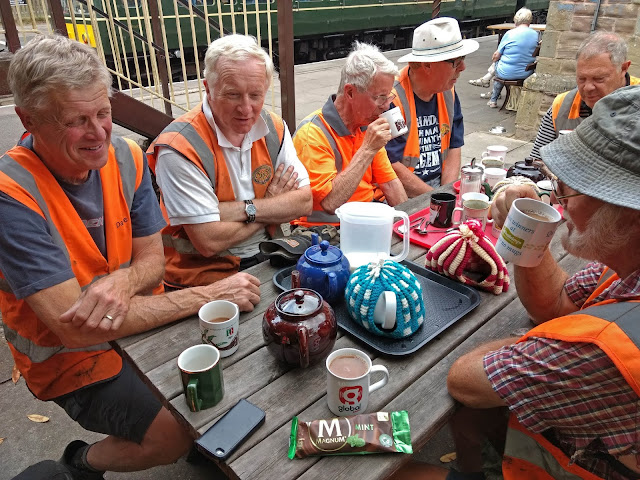 After putting away the tools and heaving the spent sleepers on to the 'even worse' pile, we repaired to our reserved table at the 'Pot de Cafe' for tea and Magnums - heaven !