Five of us today, quite a small group. We decided to measure up the rails of the Toddington north carriage sidings. These extend from a point north of the Stow road bridge, all the way up to the end of Stanway viaduct. The sidings used to hold little used stock (eg the steam crane, the kit of parts that make up 76077, and a number of wagons that belong to a third party) but since the opening to Broadway they have become much more useful for a completely different purpose - stabling two rakes of coaches, end to end. Yes, the siding is that long! There is indeed room for 16 coaches here. 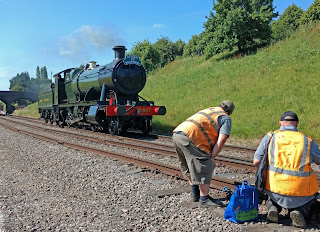 There were two 'kettles' out today, and here is the second. 2807 used the space vacated by the departing Dinmore Manor south to attach to the northern end of its train, about to leave for Broadway. 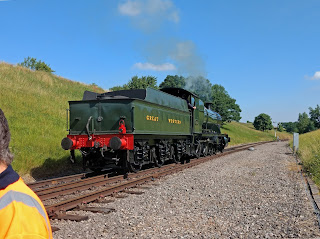 It's a bit daunting, standing here in this cutting, as you think you are on a proper main line and a Penzance Express should come hurtling round the bend at 60mph at any minute. There's double track at each end of the cutting, with this short stretch of single line in between. 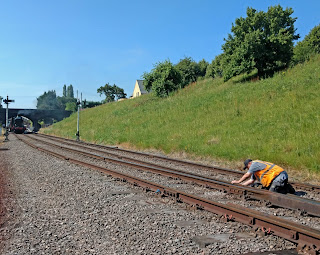 Although this wasn't part of the original plan, we did spend a few minutes also measuring up one of the ends of this crossing, which was showing signs of wear, and could do with a lifter plate.

Meanwhile, 2807 has settled down at the head of its train to Broadway and is ready to go, awaiting just a clear signal. 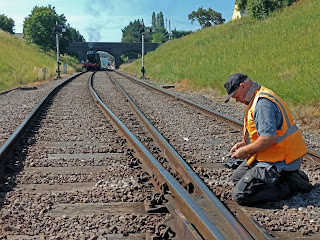 Still no clear signals yet, as Bert checks the measurements at the end of the crossing. 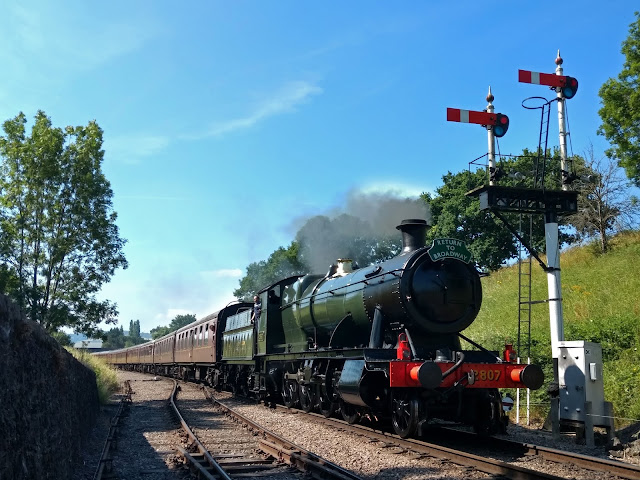 The signals clatter, and the train heaves itself into motion. It's the first train of the day into Broadway, leaving Toddington at 10.15, and it's not too full yet. 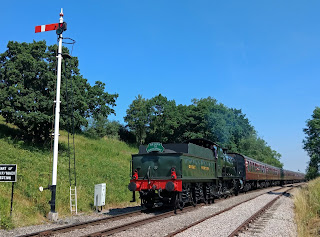 Looking the other way, you can see the siding to the right. This end is in pretty good condition, and in the past locomotives never used to progress much further.

Now that we are stabling two rakes, end to end, the loco propelling the first rake ventures quite a lot further up the siding, and we need to upgrade its quality, principally by fitting more fishplate bolts, and fitting lifter plates where in the early days, a little bump in the siding caused by rails of different wear was of no great consequence. 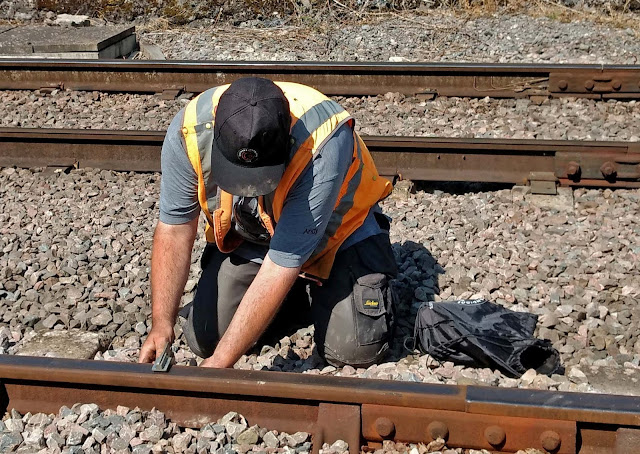 A close up of Bert measuring the rate of wear on one of the rails. This siding - being a siding of course - was laid with lower quality second hand rails many years ago and has unmatched rails of varying rates of wear. To correct this, we will fit lifter fishplates where they are needed. Measuring is the first step. 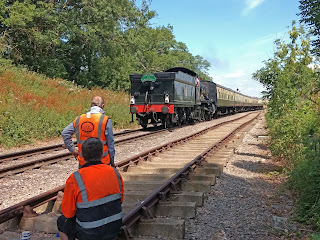 As Dinmore Manor returned form Broadway we had a tea break while we were in the shade anyway. In the distance you can see the siding start to wobble a bit, in the last few yards before the stop block at the end. 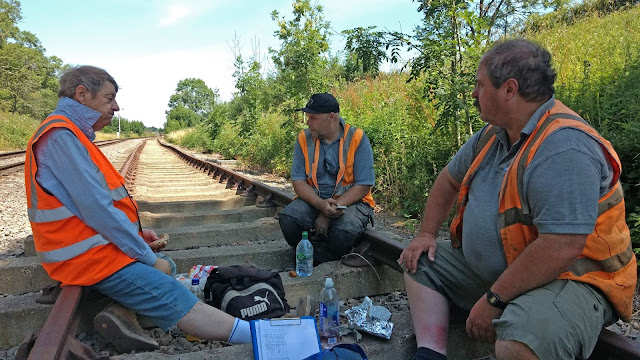 Tea break turned into lunch 'al fresco'. It has to be said that, sitting in the shade and with a very slight breeze, it was rather pleasant out here, out of sight of all humanity.

Nigel was back from his hols and the famous sponge cake was on again. What a relief!

In the foreground is the fact sheet on which the measurements of each rail were recorded.

We measured the remaining lengths up to the stop block by the viaduct, so that was job done.

While we were out here we decided to have a gander at the southern breather of the CWR stretch  that starts beyond the viaduct. Having just walked out of the cutting, it doesn't feel very high up, until, once on the viaduct, you look down. Oops! It's quite high after all... 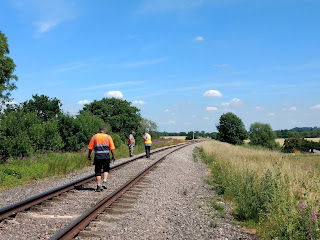 Nigel and Bert have reached the CWR breather. Out here the sun is unrelenting, and everyone has a bottle of water with them. 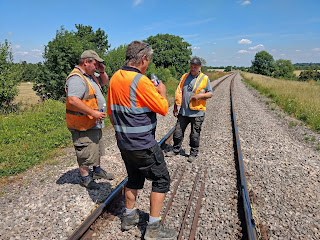 The breather was lubricated a few days ago, and we wanted to see how it was performing in the obvious heat we have been having.

The answer was: Very well indeed, no problems to report. The concrete sleepers, and plenty of ballast, hold the CWR in place despite the heat expansion. Much of the breather's work is actually to protect the CWR stretch from the expansion of adjoining, normal fish plated track.

The CWR here runs all the way up to (Broadway) Pry Lane, a stretch of 3 miles! Since it was laid, it has given no trouble at all, a big feather in the cap of those that put it down. 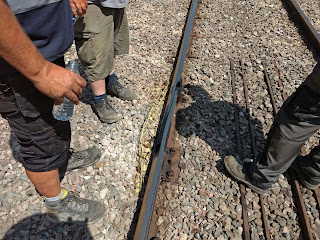 A shot of the breather from above, with the bonding wires marked in yellow to make them stand out. The two lengths of bullhead rail hold everything together. 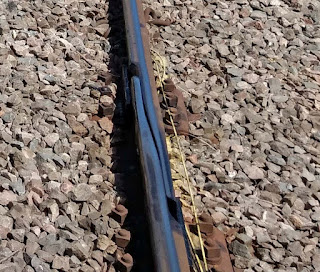 Just for those that are interested, here is a close up of the breather gap itself.

You can see how the rails can slide past each other to open up or further close the gap. The wheels feel nothing.

Note that the outside temperature was 29 degrees today, while the temperature of the rails will have been considerably higher than that still. 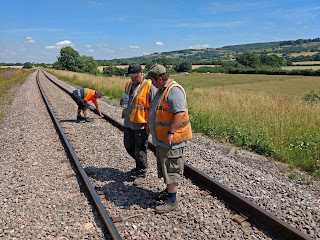 A last chew of the fat, before we walk back to Toddington in the heat. Bert pointed out an interesting phenomenon by the bracket signal (end of the run round loop). The SHC clips that hold the rail to the concrete sleepers have a tendency to twist sideways there, due to the constant stopping and starting of large locomotives here as they run round their train.


Great was the ire of your blogger as he arrived for work at Broadway on Friday morning! 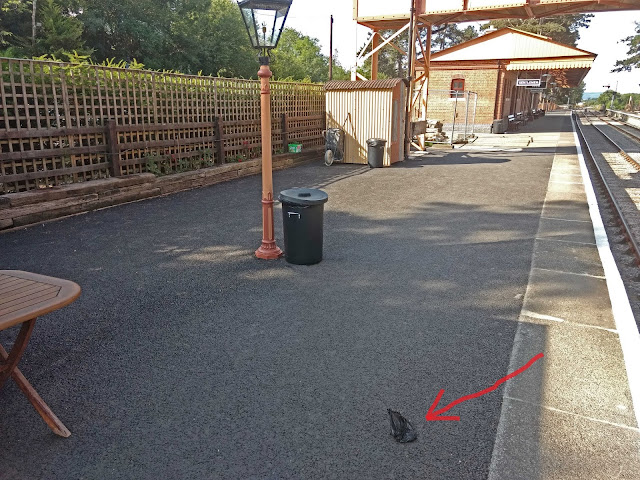 On platform 1, adjacent our neighbour's customer car park, was a bag of dog mess.

This must have been tossed over either last thing on Thursday (after the last train left) or first thing on Friday, before we arrived at 9 am. What is the purpose of these 'doggie bags' if all the owners do is hang or throw them somewhere?


In the recent (somewhat more minor) bridge strike that we suffered the wasp striping was hit by a blunt object that seemed to be less hard than steel. It bent the bracket of the warning stripes, but seemed to just scratch the actual bridge itself. 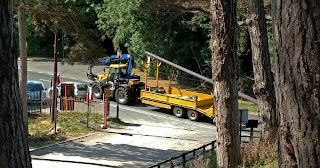 During the day we also spotted this tractor carrying a telegraph pole passing under our bridge. Now, if you wanted to minimise the overhang at the back, you would want to load it quite a way forward.....