A new process for your blogger for dealing with dipped joints and other track geometry irregularities: Not jacking and packing, but jacking and stone blowing. How does that work then? 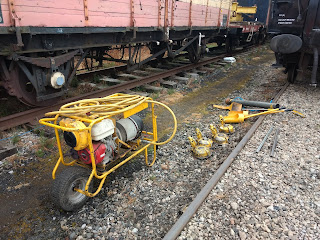 Here is all you need: A mobile compressor, 4 pan jacks, and something that looks like a vacuum cleaner accessory.

This was all heaved on to the Landie. 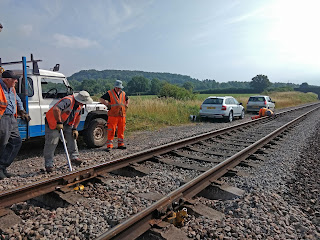 Our first port of call was Gotherington, where we had dug out some joints last week.

Here Alan is on the pan jack, while Bert Ferrule 'eyes him in'. In fact we don't lift the joint back until it is level, but a bit higher than that. When we drop the jacks again, then everything should look level. 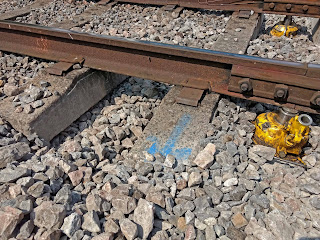 With the joint dug out and the track lifted to the right height, we get a void under the nearest sleepers, visible on the left here. It's typically about an inch high. 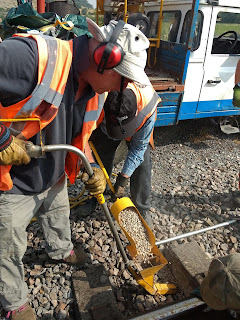 Into this void we stick the vacuum cleaner type extension. It's a tube of compressed air with a trigger and a funnel at the bottom.

Small sized ballast is trickled into that. The rush of air that comes out of the tube then carries the small bits of ballast under the sleepers until the void is completely filled. Magic !

We took a short film of the operation, which you can see here: 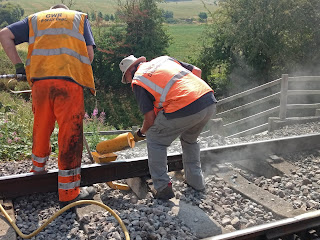 The operation can be quite dusty, and that dust shoots out from unexpected holes, e.g. at the opposite end of the sleeper, or several inches away from where it went in. 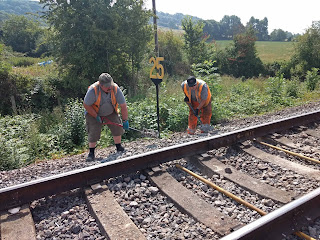 When all the voids are filled with small ballast, all you have to do (All? More shovelling of stones...) is back fill the holes and drop the jacks. The track hardly moves, just drops a few mm into what we hope is exactly the right level, from experience. 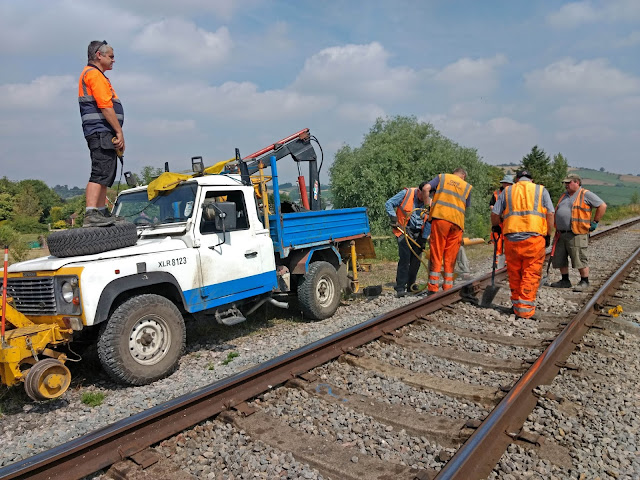 And we have a man acting as lookout, with his hand on the compressor kill switch. 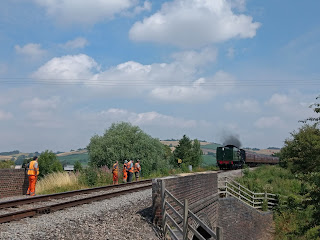 Today we had two kettles, the big tank 4270 and Foremarke Hall.

The latter can be seen approaching the gang just before Manor Lane bridge. 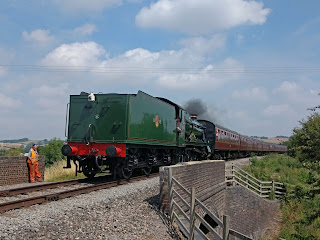 Still can't believe the shine on that tender, isn't it brilliant? Foremarke Hall accelerates away from Gotherington Loop and on towards Bishops Cleeve. 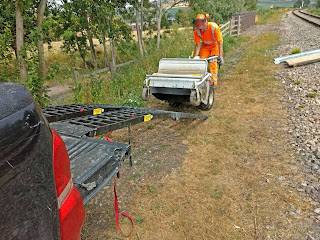 After a while we were joined by a member of the drainage gang with the smaller flail.  This is an excellent little machine that will chomp its way through the brambles and tall grass, and restore our trackside to something like its tidy, 1950s condition.

Lunch was a picnic in the same spot we have used now for 4 weeks in a row, under the tree by the access from Manor Lane bridge.

We were treated to two large boxes of fairy cakes, baked by Mrs. B. Some had three fairy cakes, while others got only one. It's an unfair world. 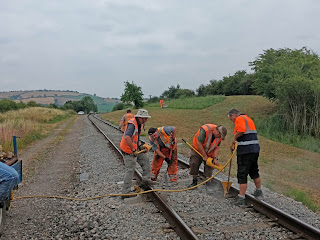 After lunch we went back to stone blowing, working our way slowly along the sleeper spaces dug out with great effort last week.

In the distance the flail is mowing a perfect grassy knoll, just as it was in the days when the line was still open.

The purpose of the mowing was not so much the looks but a test to see if it improved the drainage, we ascertained.


Some of the sleepers had white ends and this signified that there was a pumping action due to a void filled with water underneath. This squeezes out a shot of water with each passing axle, which wears down the sharp stones into round ones, and washes the ballast white. Round stones are no longer effective in holding the track into position. 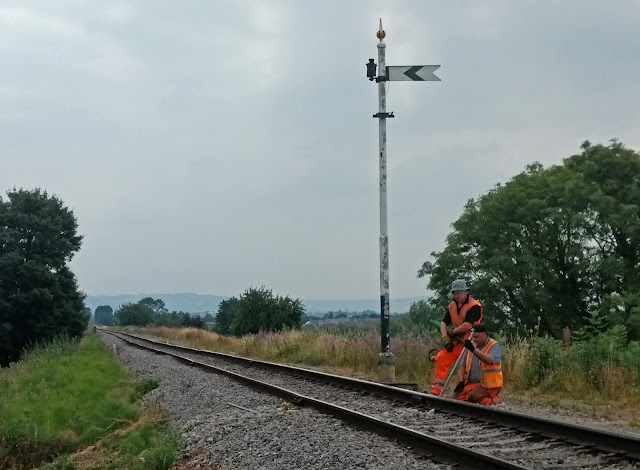 As you can see in this shot of the track section we have to do next, there is a whole stretch of dipped joints, with the one in the foreground by the signal about to be treated next. Into Bishops Cleeve itself we have CWR track, and the problem is all but solved. 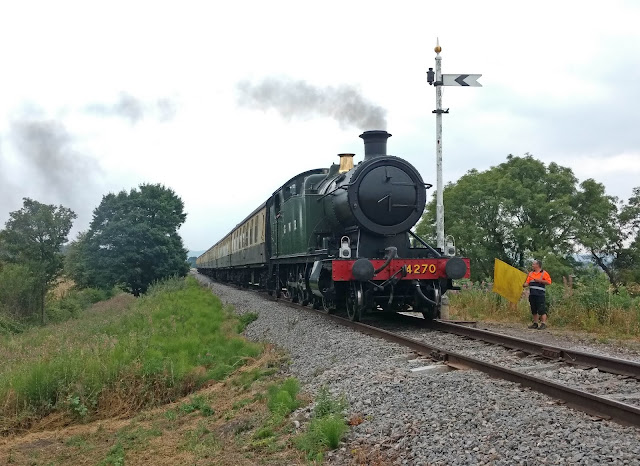 The yellow flag instructs the train to cross the site with caution. The flags allow us to effect non-intrusive track maintenance while the trains are running, otherwise there would be little for the gang to do, and we would certainly be unable to keep up with the unrelenting demands for repairs and tweaks that a well maintained railway line requires.

Out of season we do major track repairs, such as slewing track, and complete replacement projects, such as are planned for this coming winter at Toddington on some of our oldest, earliest laid track. 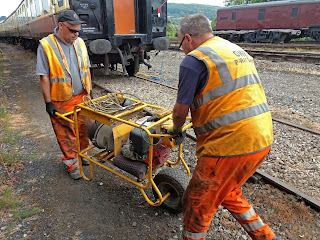 At the end of the day it's back to Winchcombe and all the tools go back into their various vans, such as the heavy compressor, with its single wheel. It really needs two of us to move it about, it's a bit heavier than a simple wheelbarrow. 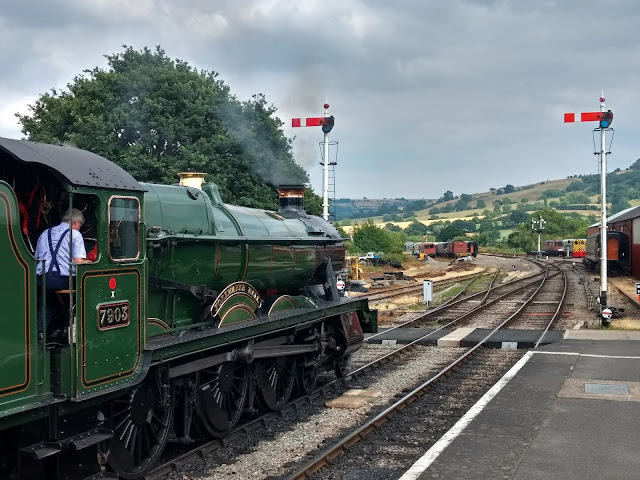 The Coffeepot is, as always, very welcoming and the after work refreshments allow a glimpse of the crossing trains at Winchcombe.
Here Foremarke Hall is waiting for the final train south of the day, hauled by a diesel loco as per timetable. Which one will it be this time? 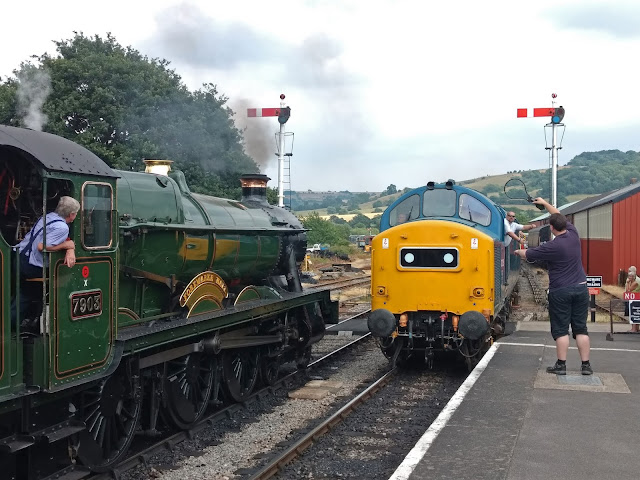 Ah, the class 37, a personal favourite.

The signalman has walked down from his box to exchange the tokens with the second man. This allows him to release the road for Foremarke Hall to proceed on to Toddington.

Action at last on the future car park at Broadway! Notices have appeared on the footpath announcing its closure for 12 weeks starting on 25th July. 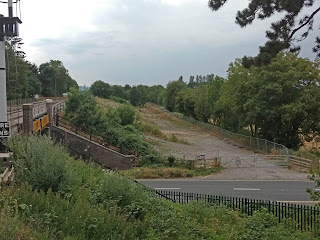 Here is a view of the future car park from above. It looks as if it is expected to be ready by December. 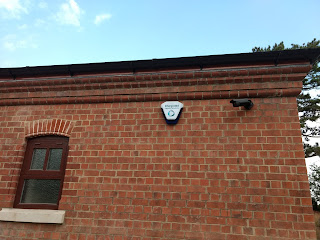 At the station a security firm is installing alarms and CCTV.

Platform side the cameras are under the canopy and less intrusive, but that cannot be said for the Edwardian frontage on the forecourt. 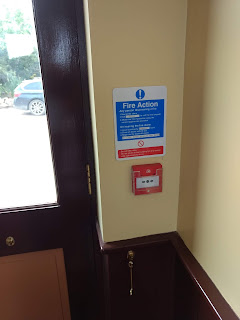 The booking office has received an Aluminium plate with instructions as to what to do in case of fire. 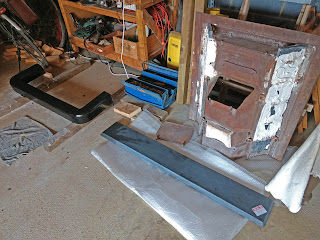 There's also news on the replica fireplace for Broadway. The money donated by a handful of generous supporters has permitted us to purchase a complete set: The slate hearth, cast iron insert with slate insets (covered in plaster in the picture, seen from the rear) as well as the complete slate fireplace surround, of which you can see the brand new mantlepiece here. An original hearth surround was found on site at the station, buried in clay. It has been shot blasted, fillered and repainted in gloss black, at the top of the picture. 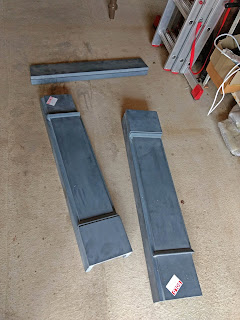 These new pieces here will form the two sides, with replica detail top and bottom.

The piece at the top goes between the two. 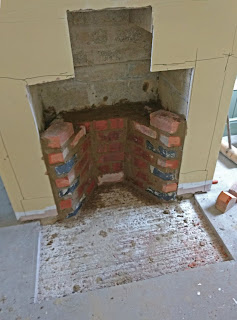 With the fireplace funded, design agreed, manufactured and now delivered, work can start on actually fitting it to the cafe.

The chimney breast that was built had a rather rudimentary hole at the bottom, and as found had no lintel across it. It was also half plastered over.

An approximate shape has now been cut into the plasterboard, and in the foreground the shape for the slate hearth has been cut out. The black hearth surround will follow this shape right round, ending at the foot of each of the two vertical pieces. They have been pencilled in on the plasterboard. 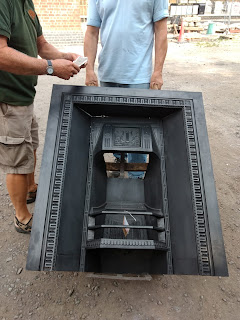 During the day the heavy cast iron insert was taken out of your blogger's car boot (finally!) and taken by GWR platform trolley over to the cafe.

Mrs. Blogger wasn't very happy about lifting it in, but she did it, bless her. Three men lifted it out again. 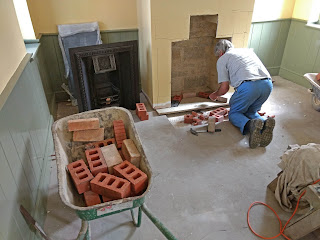 During the day Neal and John could be seen cutting bricks and building them into the back of the raw fireplace hole, to produce a mirror image of the rear of the cast iron insert. You can see it parked here at the top left, together with the slate hearth. When the brickwork is complete and a lintel has been placed, the insert can be slid into position. The actual slate fireplace surround comes last of all. The depth of the hearth is so calculated to arrive flush with the finished floor, which will be a simulated oak floor of the Karndean type, as in the stationmaster's office. That should look reasonably realistic, while offering the cleaning possibilities necessary in a busy cafe.

It doesn't look as if the cafe will be open this season yet, but there will be a tea and coffee stall during the diesel gala.