Out in the sun

What a wonderful streak of brilliant weather we've been having - hot - hot - hot every day. 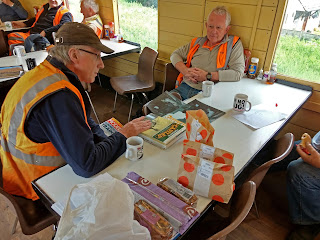 We started our day in the mess coach, back home in the siding at Winchcombe.

It was John B's birthday today, and he brought with him Swiss rolls and cake, while Paul brought in the fresh doughnuts. 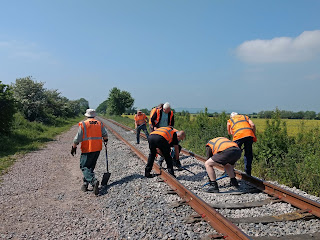 A small team of two went to check out a report of a noisy fishplate joint at Toddington (with a doctor's repair kit) while the larger team addressed two excess ballast issues at Laverton and Stanton. Shoveling again... 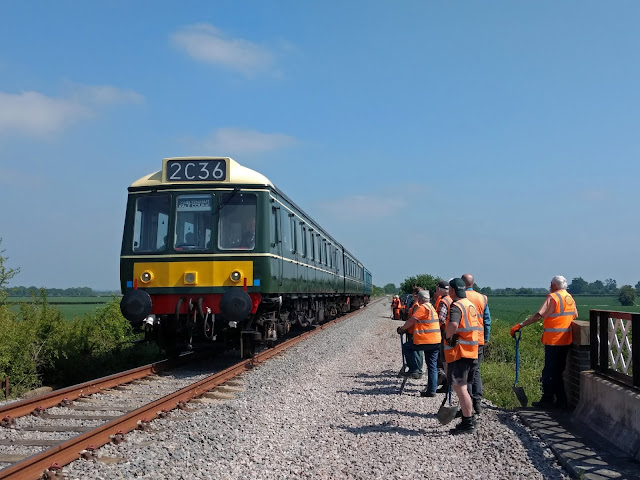 The Laverton job was handled quickly - it was really just to deal with a small, additional ballast drop, which had covered up the track fittings. Soonest said, soonest mended.

Then we said hello to the first service out of Broadway, a DMU on today's blue timetable (one steam, one DMU) 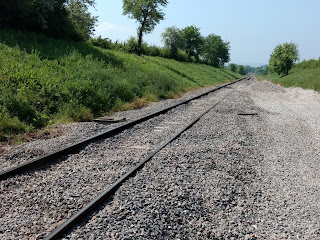 The next job was similar, but a bit further along next to our ballast loading point at Stanton. Would we clear the ballast here, enough to reveal the track fittings?

This was a rather larger job, which would take us well into the afternoon.

The picture shows the job 'before'. 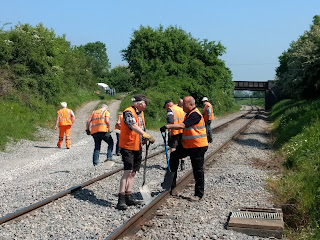 Here we are now 'during'. Just armed with shovels, we found the job quite arduous and vowed to return after lunch with more suitable mattocks and rakes. 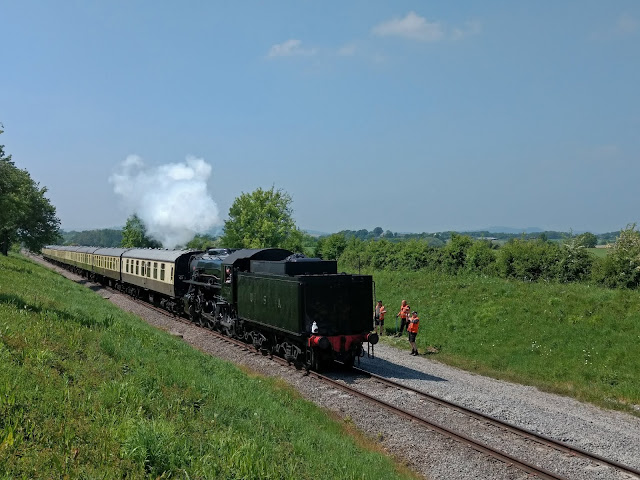 Luckily the team was relatively large, as there was a lot to shovel. Basically, the excesses of Stevie's enthusiastic ballast loading, the stuff didn't always fall squarely into each Dogfish.

The S160 was out today, which was very interesting to see. What a lovely whistle it has. 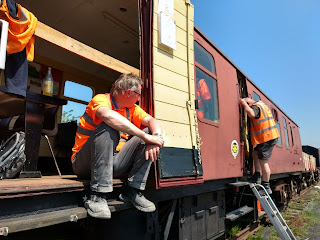 We had our lunch in our luxury mess coach, doors thrown open to give a lovely terrace on which to sit out and watch the trains go by. 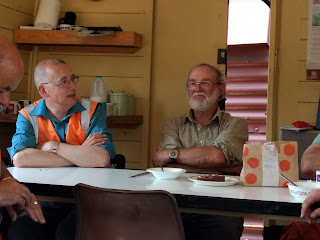 John's birthday did not go unnoticed, especially with all the cakes offered, so we had a rousing happy birthday song for him, and a card. It put him into a reflective mood, but it's good to have your mates around you. 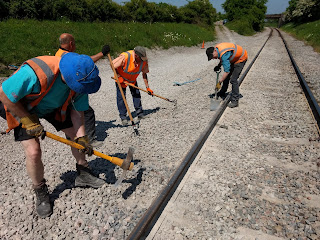 After lunch, it was back to work, and now armed with the aforementioned mattocks and rakes. It was true, this is easier, and the job went rather faster from then on.


As the job neared completion during the afternoon, thoughts turned to railway matters and in particular to a planned outing to the NYMR on June 14th/15th. All done by train! Brummingham to Pickering, and return.

Sounds like fun, providing every train is on time, as we only have a 5 minute window for a change of train in the middle. Cripes! Running shoes firmly advised on this trip. 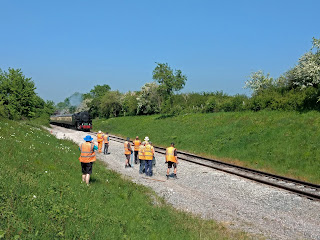 In the distance the S160 appeared under the Stanton road bridge, perfectly on time. We stood to one side and acknowledged its very American sounding whistle. 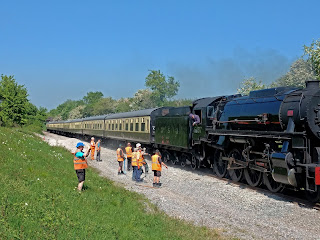 Your blogger's camera has two camera apps on it. One takes a picture when you tap the shutter release, the other.... waits a bit first. Dang, there goes the loco! 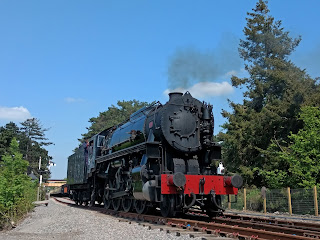 Here's the loco stationary at Broadway, so no shutter speed issues with this one. What an interesting engine this is, and quite a coup for our gala (as well as 6023 of course, but the King wasn't authorised to run yet) 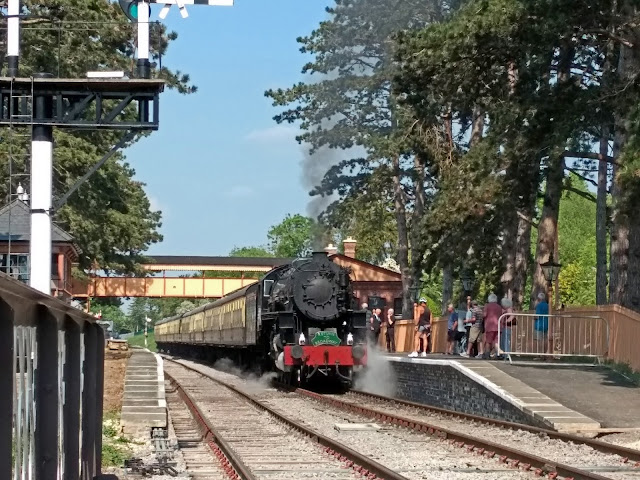 After running round its train, the loco here is ready to go. It blew its whistle briefly before setting off, and there was a lovely echo of it from the trees.
The Broadway platform was busy again, and this due to two coach parties that dropped off their passengers for Cheltenham here. We spoke to one and ascertained that they had come from London and were lodged at a Cheltenham hotel. Interesting to see how and why people come to us.

If you want to see this train leave Broadway, there is a YouTube film of it here: 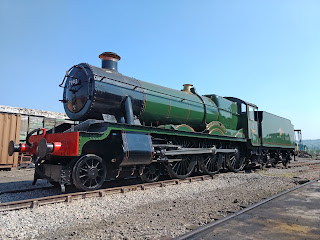 Then on to Toddington, to measure up a slate fireplace for replication in the Broadway cafe.


Outside the shed, 4903 had been turned to face north, and was pimped and polished, ready for the gala. 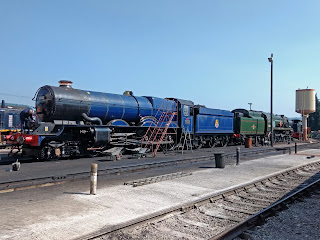 Next to it, the King has having all its copper and brasswork polished up.

Sadly this meant ladders on both sides, so we can't offer you a clean picture of it.

Just beyond is Mr. Bulleid's offering for a heavy passenger locomotive. 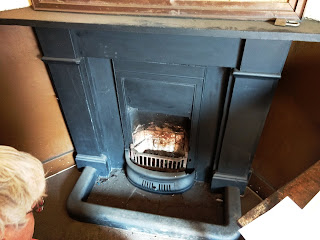 Here was the object of our desire, an original GWR slate fireplace. A group of supporters clubbed together to raise £2000 (before gift aid) to buy the Broadway cafe a new fireplace. We are currently arranging for a firm to supply a very similar one, in slate, and they wanted some more dimensions. Not easy; it turns out that there were at least two sizes and the beautifully preserved one in the Toddington Ladies' Waiting Room is in fact a bit too small.
A lot of people pass this one almost every day, but did you ever notice it? It is in the goods office in the Toddington goods shed. This one is the correct size. We know this because we have an original fender for it, found in the clay at Broadway and currently off being shotblasted and powder coated.

Then there was a loud toot, and Oliver Cromwell arrived! 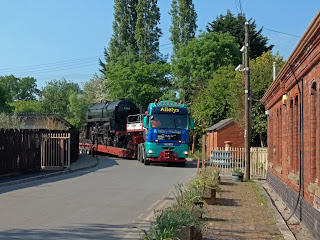 Here is the loco on its low loader, just squeezing down the Toddington station drive. 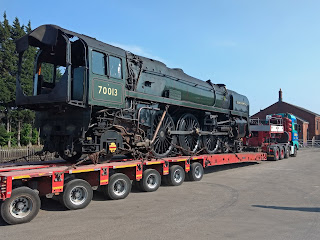 Another magnificent beastie for our gala. Don't miss it this weekend !

Finally, a chat with the driver of a Dutch coach from near Vlissingen. He brings a coach load of tourists once a year, for 5 years now, to stay in the Tewkesbury area and visit various attractions, including our railway.
Had he been to Broadway yet? No, it was Toddington - CRC and back. The driver was waiting for a car (coach) park at Broadway, as not only did he want to drop off his tourists, he liked to go on the train himself.
It's amazing from how far away (London and Vlissingen) our passengers come, in this random but admittedly unrepresentative sample.