Out along the line

Three groups of us today, all out along the line. Overnight there had been heavy rain, and this morning looked equally dire. 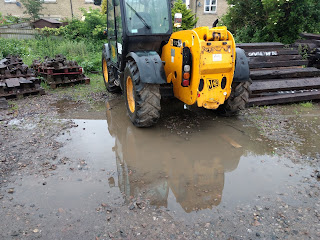 After an extended tea drinking session in the mess coach, in the hope the rain would let off a bit while we drank and chatted, we selected our various groups to join for the day:


A. Took the Telehandler to Toddington to recover some second hand sleepers for Saturday
B. Fixed plastic numbered tiles to a stretch of rails for future trackwalk identification purposes. The glue, we were told, was so strong that it would resist all efforts for the tile to come off, rain or shine. Experience will tell if this is indeed true in practice, but you have to try.

It has to be said that group...

...was working from a list which said things like '2 1/2 panels south of the aqueduct' and 'the panel by the apple tree north of skew bridge' and while this was great fun and always allowed us to find the missing clip in question, it wasn't very methodical really. So the tiles could be a way forward here. 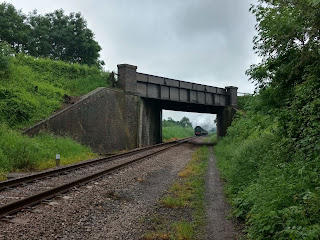 Group C piled into two products of JLR and rumbled along the trackbed at Stanton. It wasn't long before the first train appeared from Toddy. 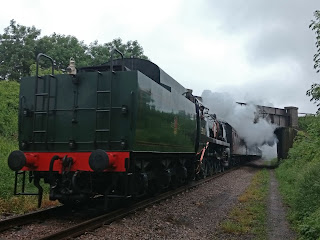 This was the huge lumbering shape of P&O, one of two Pacifics out today. Plenty of steam to see as the air was quite cool to start with. 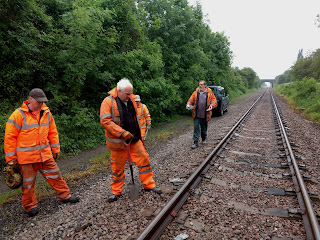 Guided by the trackwalk report and desperately looking for apple trees and 2 1/2 track panels, we slowly worked our way south from the B4632 skew road bridge over the line.

This is all CWR here, laid about 10 years ago as the railway slowly started to explore north of Toddington, culminating in the triumphant arrival at Broadway this spring. 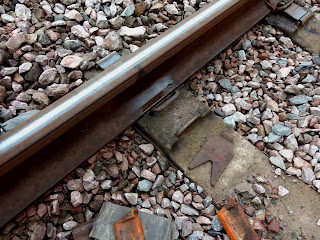 This is the sort of thing. For some reason SHC clips, even driven in with a chunky keying hammer, seem to work their way out again from time to time. If the SHC clip appears to replace too easily, we need to fit an extra rubber pad under the rail. This makes everything tighter.

First though we need to lift the rail up, so Dave here digs a little hole to make room for a little jack. 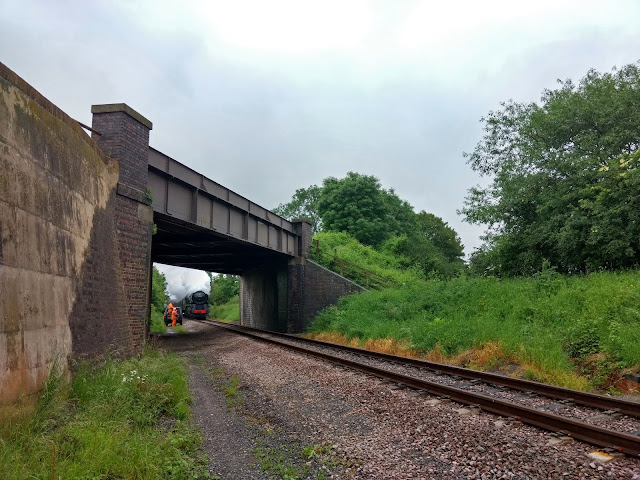 Then P&O comes rolling back down from Broadway, here just about to pass under the B4632 road bridge. Now it's facing south, which is much better for the camera but the next picture was blurred - too little light, train too close. 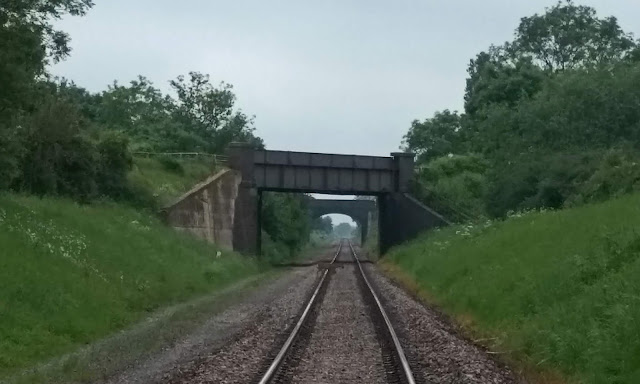 There may be a busy road above, but down on the tracks it is peaceful and a haven for wildlife, away from the roar of the traffic above, just a few feet away. This deer appeared out of the undergrowth and crossed over to the other side, then back again. 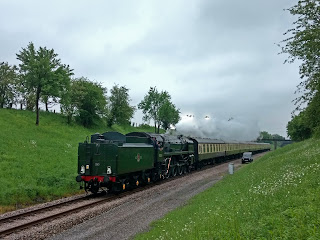 We got ourselves a big sack full of these clips, so plenty of ammunition to replace missing ones (and often as not the ones adjacent to the ones reported as faults as well). As we slowly worked south, the real object of our desires appeared, tender first. It was 70013 Oliver Cromwell, still in service. Who needs a gala if you are a trackside volunteer? 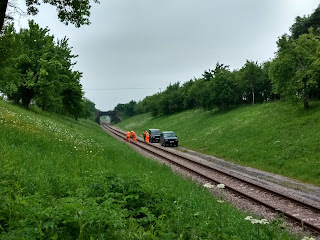 Between trains the little gang worked on its own in the middle of the lush, verdant Cotswolds countryside. The cutting sides have been beautifully flailed, releasing grass, Buttercups and Marigolds to push their way up. Beautiful. 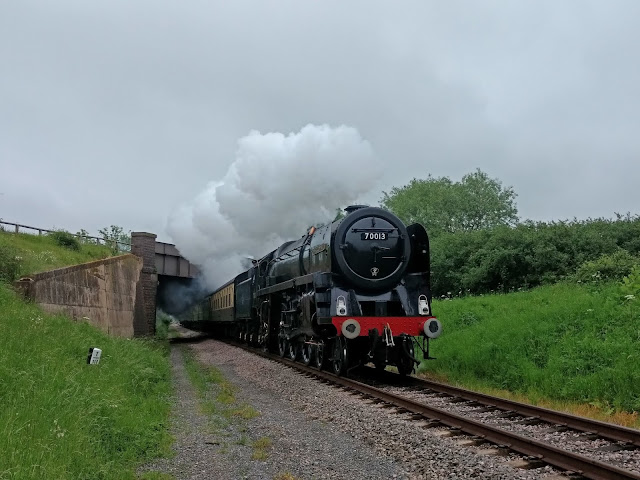 Even more beautiful of course when you have a massive pacific locomotive burst out from under the bridge. How lucky (or well connected) we were to get to borrow this for a few days. Of course as an ex main line we are the ideal playground for it to frolic on. 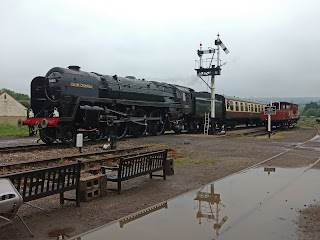 Lunch was back at Winchcombe, where the mess coach is now located, back where it used to be before its temporary stay at Toddington. Here 'Ollie' slowly pulls into the station before a crowd of admiring C&W volunteers. 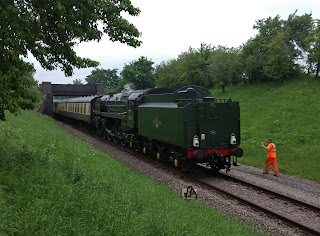 After lunch it was back to Stanton, to find 'Ollie' returning tender first.

We were getting into our stride now, and did really well, considering that we replaced more clips than were actually outlined in the track report.

Doug acknowledges the wave from the driver here. 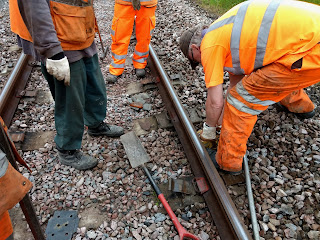 Then it was back on the job, with Doug here pushing the little jack under the rail in order to lift it far enough for us to replace or double up the pads, as the case might be. 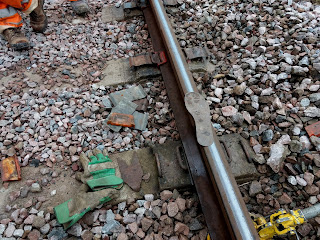 We also found the footprint of a mysterious track walker. Just the sole remained, the rest no doubt instantly vapourised by a hot blast from Paul's famously strident tongue! Too late for dinner, eh? Only five minutes, you say. It might just as well be 5 hours - you, young man, are in the dog house. 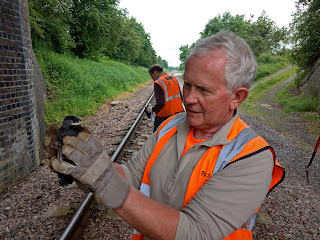 Under the Skew Bridge we came across this fledgling in the cess. It appeared to have fallen out of a row of nests just under the steelwork, so it would be a young crow or similar.


The little chappie was quite docile, and allowed Paul to pick him up without any difficulty. We placed him a little further along in the grass. 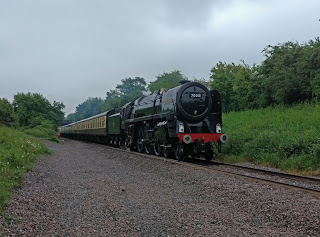 The end of our labours took us to the ballast depot at Stanton - easy to remember for next time, as the job isn't finished, we could go all the way through to Toddington like this. At least the destination is in sight from here, and the cameraderie was excellent.

Finally, two more photographs taken on Monday while at Broadway during the gala. 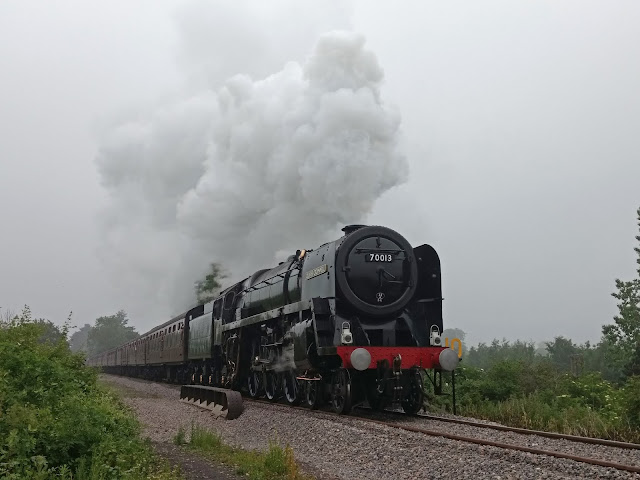 Here is Britannia 70013 Oliver Cromwell just opening the regulator as he (she?) passes the end of the 10mph station limits speed restriction by the Childswickham Road bridge. What a sight! 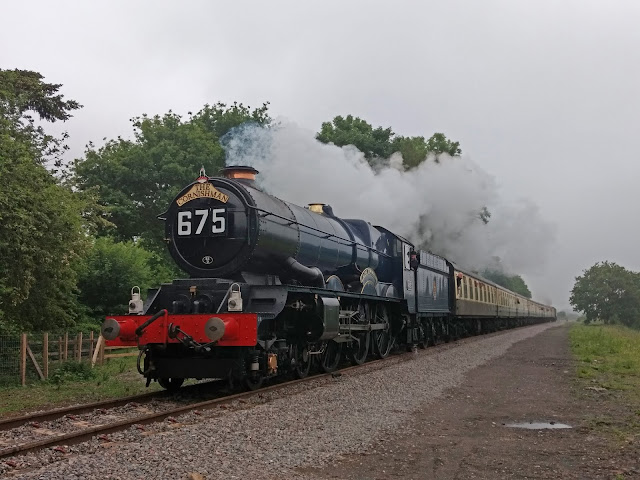 The blue King faced the other way and was a bit more difficult to snap in the Broadway area, but here he (she?) is just giving its train a final bit of regulator to get the 8 coach train well into the new station.

Before we forget, we are likely to pay another visit to the foundry that makes our GWR replica castings, so if you are interested in a GWR lamp post, a GWR 'BEWARE of TRAINS' notice, a ball topped gate post or possibly a pre grouping 'PASSENGERS are requested to cross by the BRIDGE' sign, now is the time to express your interest to breva2011 (at) hotmail.co.uk.