Seizing the chance of a traffic free day, we had the ballast train out today to attend to one or two areas of short ballast along the extension. 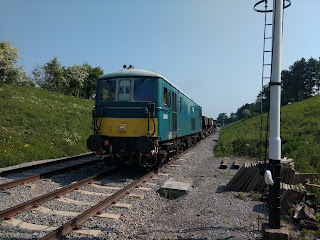 Neil brought the ED up to Broadway, where he picked up the Dogfish, which still had some ballast left in them.

He then took them down to Peasebrook, where there were several small spots that needed a bit of muscling up. 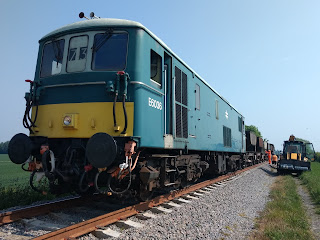 Stevie was there too, his usual bouncy self, and this time in shorts.

That can mean only one thing: It's summer! It's official now.

He also sported a new set of slip on, steel toe capped boots. No more walking around with his laces trailing behind. How many times have we told him.... 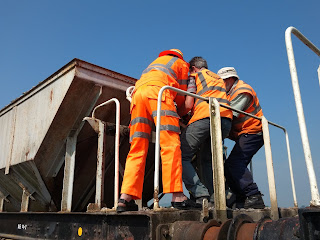 After standing still for 5 months, those Dogfish handwheels were very stiff again. It took three of us to get this one loose and operating.

Our special orange lever for this job was not in the Shark - anyone seen it? 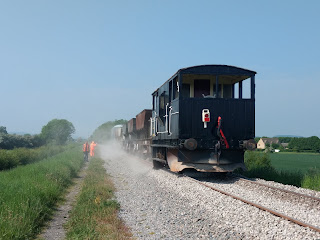 We dropped a couple of wagon loads south of Peasebrook. It's not only hot now, but also extra dusty. The Shark dragged along behind ploughing the ballast out, squealing and crunching as it went a long. 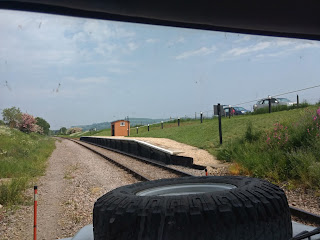 Soon the train was empty, and Neil took it to our yard at Stanton for Stevie to refill.

The 4 operators of the train went off to near Hayles to manhandle some rotten sleepers into a pile. We then bundled into the Landie, after deciding that the shelter at Hayles would be a nice cool spot to sit and have our picnic.

We found Rick and Paul strimming the grass there, keeping it all very neat. It grows amazingly quickly. 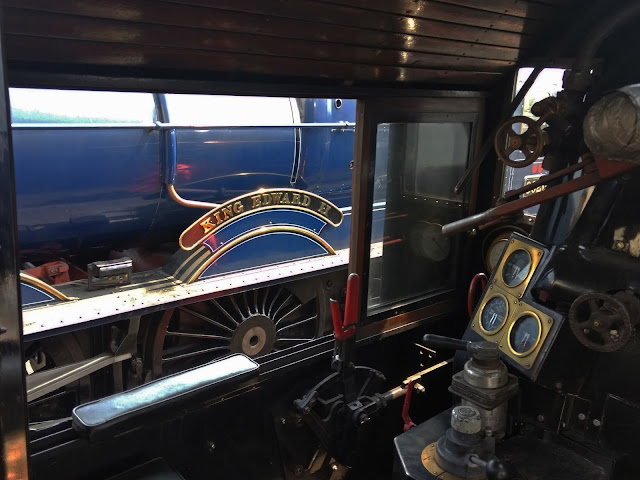 After lunch we dropped in at the loco shed for a bit of behind the scenes cabbing. It's a benefit of being a volunteer, after all. Here is the King, seen from the cab of the S160. There is a great deal about the S160 that is different from the GWR locos that we know. Just look at this picture for example. You can see a steam reverser, padded arm rest for the driver, and a pull out regulator. The whistle seemed to be a bit of an awkward handle to lift up (top right) and it was mirrored on the fireman's side. Nice brass dials too, and airbrake controls. 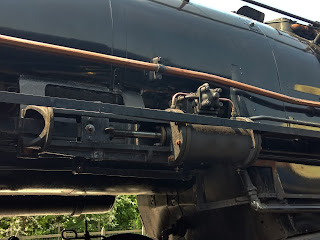 Outside under the running pate is this little steam machine - it's the powered reverser, controlled by that red lever in the cab above. The frames are chunky bar frames, and you can see right through under the boiler. 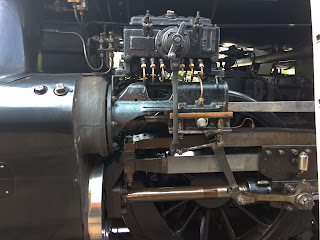 Then here's the crosshead. What's all that paraphenalia on top then?

It's a central lubrication system. How handy is that? A King has over 120 oiling points, all serviced by hand before each trip. 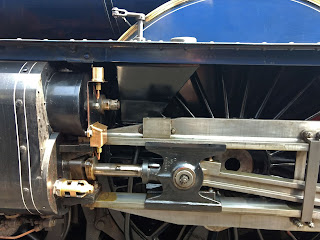 Here is the same place on a King.

You have to admit that it is so much neater, nice clean lines. But a lot of work. Lots of little oil pots, all marked '6023'. 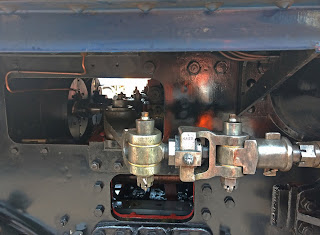 Here's another unusual item from a King. The King is a 4 cylinder locomotive, with two cylinders between the frames, and two outside. This unusual mechanism passes the valve drives from inside to outside via a pair of rocker arms through the frames. You don't see that very often. 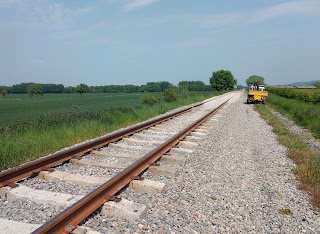 While we had our picnic and poked around the loco shed, Steve reloaded the ballast train.

When the Dogfish were full again, we went up to Little Buckland to meet the train, and continue dropping bits of ballast here and there, further southwards. 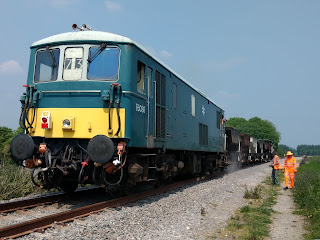 Here we are south of the Buckland bridge now. We need plenty of ballast on the shoulders to hold our CWR rail in place, especially now that the weather is getting warmer.

It was interesting to see that the CWR breather still had a fair bit of expansion room today. The outside temperature was a steep 25 degrees! 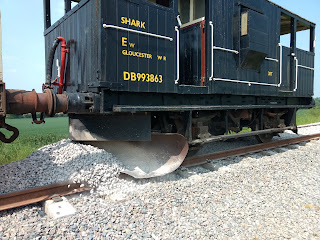 The Shark did its job very well, although it was painful to have to wind the plough up and down several times. We demand a motorised plough mechanism ! 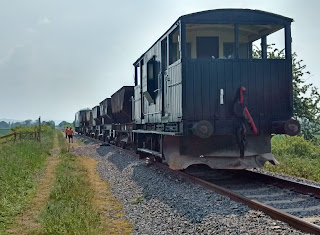 We ran out of ballast by the foot crossing coming out of Little Buckland curve. Job done.

Neil took the train back to Broadway, where Stevie had also arrived. 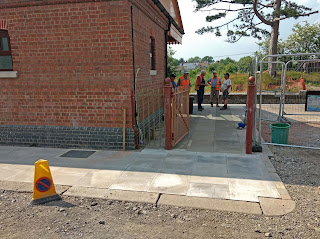 The lads had just finished the footpath with the granite kerbs, now the full length of the building, and swerving round the corner and through a new gate, in the same place as the original one. In fact in 1904 this was the original, and only, way into the station.
Check out the rounded corner piece on the kerbs. This was unexpectedly discovered still buried on site a few weeks back, and it has found excellent use straight away. The reclamation yard only sold straight pieces, so we were very lucky here.
To the right, and level with the gate posts, the fence and kerbs will continue another few yards, to meet the gate of our neighbouring B&B. 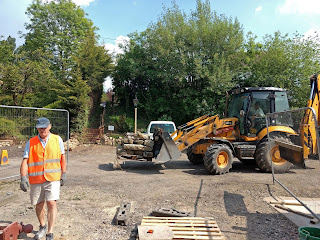 Steve then brought up the remaining granite kerbs from their temporary storage in the future car park.
This area of the station is still fenced off, as the canopy overhang and footbridge steps will be assembled here.
Posted by Jo at 17:43