A gang of 20 spread itself out along the last 1000m of CWR today. Suddenly, 20 seems very few people indeed. Where are they all? Well, that's one every 50 metres... 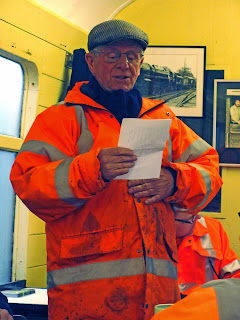 To start with and to provide some entertainment while we drank tea and ate the festive iced mince pies, Clive stood up to give us a low down for the mammoth 'Clippathon' next Wednesday 13th December.

There will be 6 gangs clipping up 6 panels each. Sunshine and a cloudless sky have been ordered, to make a change from last time. Clive is hopeful of getting the mess coach and van actually out on the extension, which would solve the car parking and messing issues. Treat yourself to a ride up the extension! Bring your own lunch, but Paul will be providing Tomato soup. If you want some, bring your own mug, as we're going to be short.

Then it was 'all hands on deck' today, to get the stretch ready for the welding on Tuesday and the Clippathon on Wednesday. 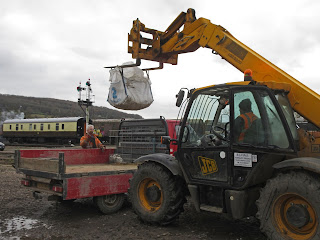 Seventeen of the 20 went up to Peasebrook with the Landie loaded with tools, while three went to Winchcombe to try and secure the red Transit (success there!) so that we could use it to supply Peasebrook with the necessary extra materials.
The first thing to be loaded was a dumpy bag of sacks of Pandrol clips. We tried a second, one was not going to be enough, but after a quick inspection underneath the Transit springs said 'no', and we took it off again. That would mean a second trip at least. 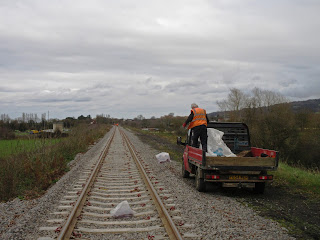 The dumpy bag contained about 20 plastic bags of 25Kg each we reckoned, so that's a good half ton up there. And half a ton to fish out of the bottom of the dumpy bag and throw over the side, every 10 sleepers. Competition for the driving job was fierce, and Peter won by a short head, leaving Andy on the back rummaging in the dumpy bag. 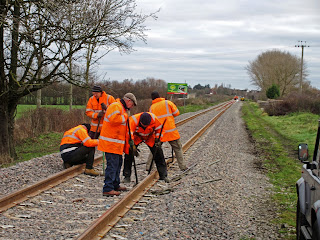 Jobs to get this stretch ready for stressing then:

- Unclip the 5 fully clipped lengths at the southern end (the former anchor point of the previously pulled stretch)
- Lay out the pandrol clips for the remaining stretch (different sleeper type)
- lay out the pads for same
- Locate and distribute the plastics for same
- Finish sweeping the last length
-Raise both rails off the sleepers and insert the rollers.

In the picture part of the gang is occupied unclipping the 5 anchor point panels. That was a very slow job as it turned out. 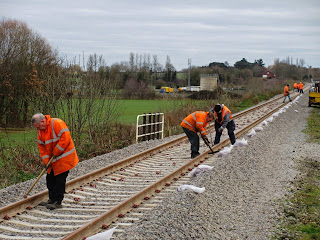 An easier job was the unclipping of the Pandrols further along (only every other one was done up in the first instance) and this little team made short work of it.

Note the row of Pandrol clip bags - neat, eh? The spacing was carefully counted out. 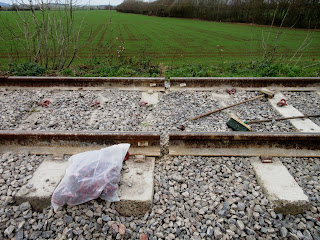 This is what it's all about - the gap where the hydraulic pullers will be positioned next Tuesday, and after the pull it will be welded shut. 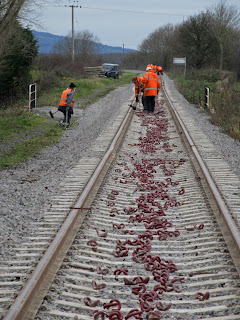 Behind the Pandrol supply team's bag drops others had already opened them and put 4 on each sleeper. They're all carefully counted, you can't just throw them down. Orange insulation clips are still to go. 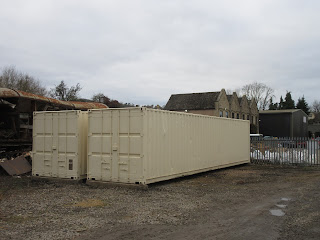 Then it was back to Winchcombe to fetch more supplies, this time the black plastic pads that go on the sleepers, under the rails.

Did you spot these two new 40 footers at Winchcombe? Note that all you need to place them is two concrete sleepers, one at each end. It's cheap, they can be moved afterwards, and they're solid as a rock. 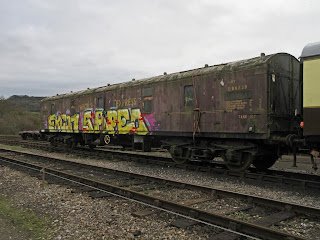 Another item that was new at Winchcombe is this GUV. Athough heavily covered in graffiti, it's actually in pretty good nick, although its principal attraction, we heard, is its two good bogies.

While we were loading a pallet of track pads, one member of C&W sort of sidled over and asked 'Could you just....?' 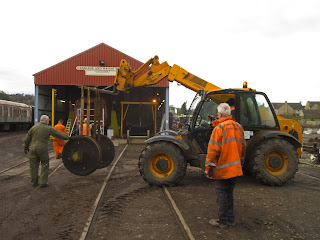 OK then, if it's quick. These are dangerous words. They usually morph into 'and while you're here now, could you also just....' but to be fair the lads from C&W stuck to their word and we were off again to Peasebrook. We tried a pallet of pads, and a second pallet of Pandrol clips, but once again the springs said 'no'. Just the one then, we'll have to come back a third time. Went up and down that B4632 four times today! 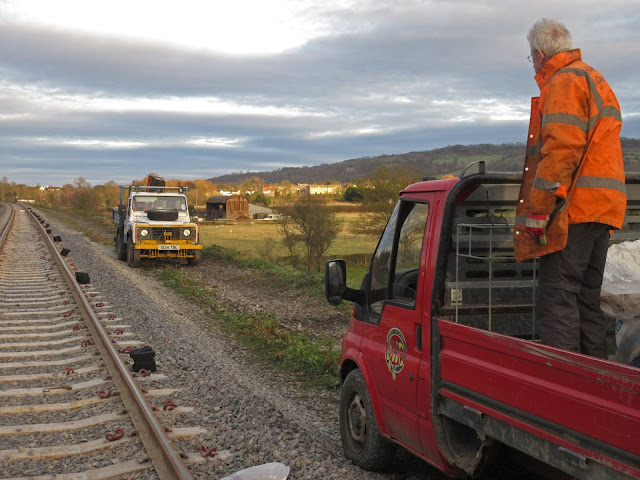 Back at Peasebrook, it's a ballet on the road adjoining the track. Out here on that long embankment leading to Childswickham, there's only a single point where 2 vehicles can pass. We saw the Landie come towards us some distance away, so paused at the passing point. The Landie also stopped. We advanced. The landie advanced. We stopped again. Finally we met in the middle. Negotiations as to who should retreat then ensued, it was worse than Brexit! Such fun. 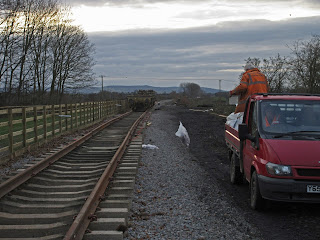 We tossed off sufficient Pandrol clips to cover the stressing section, then disposed of the rest from the dumpy bag by the goods shed, where they will be needed next.

Our last Transit job was to recover the pile of Pandrol 'biscuits' (orange plastics) from beside the trackbed at the goods shed. They were put there in bags, but due to the effects of the sun the bags had disintegrated and there were little orange plastics everywhere. On our hands and knees we gathered all these up into the former Pandrol dumpy bag, and took them down to the stressing section. 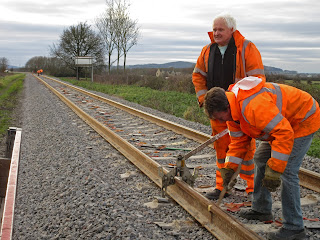 Returning to the section to be stressed we found two gangs lifting the rail up to place the rollers.

The guys at the former pulling point - fully clipped up, we recall - had a tough time of it. Not only did they have to undo everything again, when they lifted the rail the pads already in use stuck firmly to the underneath like glue. In every case the pads had to be scraped off from under the rail lifted one inch, using whatever scraping tool you could scrounge on site. 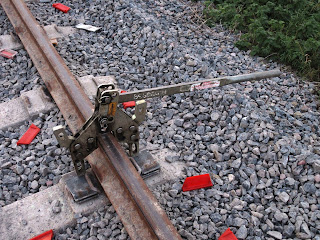 This is the special lifting tool for that inch of height. You stand it on a pair of SHC clips and heave the handle down, with one tonne of rail coming up one inch as a result.

The slow thing then is to get the pads off the rails, and any bits of dirt out from underneath - the clipped up stretch, although brushed, seemed to have attracted far more little nests of pebbles than the rest. 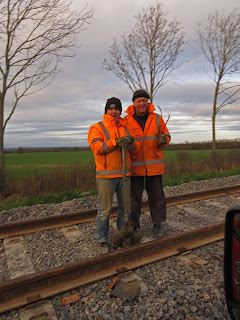 Here are Dolce and Gabbana from the rail lifting gang, a charming pair as you can see.

Good humoured, they are proud to show off this season's PWay wear. These people are at the cutting edge of fashion after all, we have to take our fashion cues from them.

Trousers are not only stone washed, but also mud splattered. Quality shops will sell you these ready browned.

Accessorise with a rail lifter, or, why not, a piece of scraping wire playfully displayed. 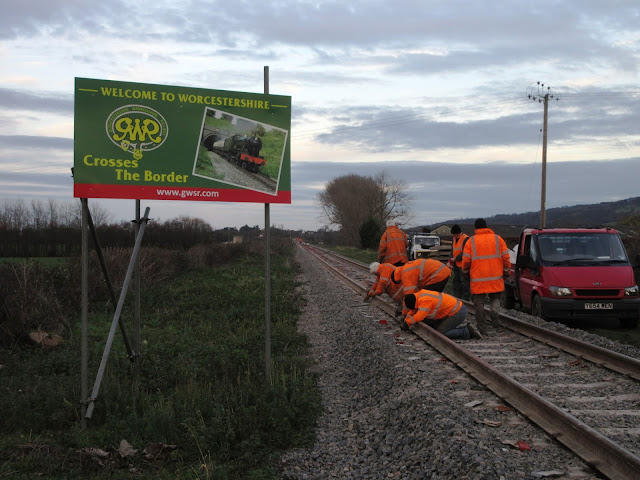 At the end of the day the southern rail lifter team came to the end of their five length stretch. What a b.....r it was to get all those pads off, stuck to the underside of the rail like limpets. Stricken with relief three volunteers fall to the ground in gratitude.

It began to get dark, and while this team now started to make serious progress on the simpler unclipped section, it proved impossible to prepare the whole stretch. We are going to have to come back for an extra day to finish it off. This will be Monday. If you can do that, or join us in the Clippathon next Wednesday, we would be very grateful. Bring a mug, and you might even get some soup.

A selection of 160 of Ivor Dixon's 'early GWSR' photographs have now been scanned, cleaned and corrected, and uploaded on to Flickr. You can view them here:

If you think getting to Broadway was a big job, check out what faced the earliest volunteers when they turned up at Toddington and found a trackbed that was completely empty!

Do feel free to add any additional comments or extra knowledge that you have on any picture.