It really sank in that it was winter today - the temperature was down to 3 degrees, it was raining, and a Santa train left Toddington in a vast cloud of steam. 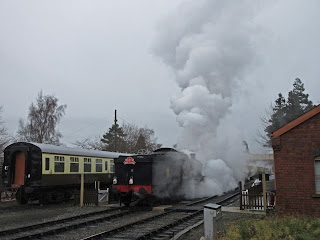 This was a double header too, although you'd never know it. It was a Prairie and a Manor. Where's that Prairie then... 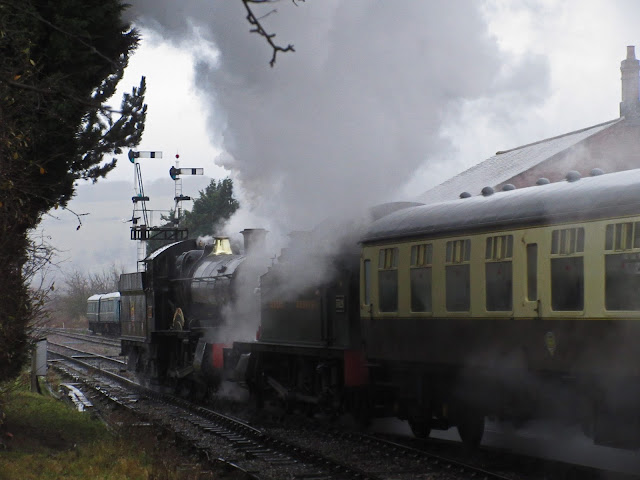 Ah - the veil was lifted as they steamed out on to the main line with a long train for Winchcombe. 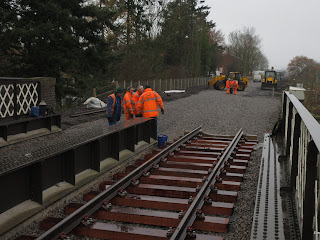 A quick cup of tea then, a briefing, and we are off to Broadway.

Here Steve has been busy these last few days, and as you can see he has joined up the ballast beds north and south. Soon we will have track on them too.

This is today's opening shot - one track is over the bridge. It was drizzling steadily. 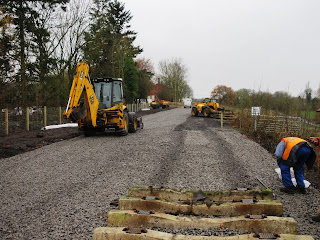 The first job today then was to extend the sleeper run on the up line down to the gate by the access road up the slope. That's where the turnout will start. 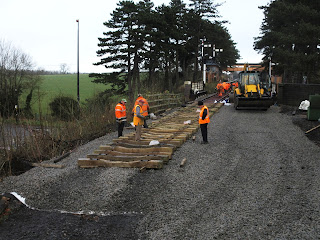 Although we were all together on site, we had three main areas of activity, within sight of each other.

This team here is extending the up line southwards, and in the picture has gone as far as it can go with concrete sleepers. A pair of rails could go in, but there's no time for that at the moment. 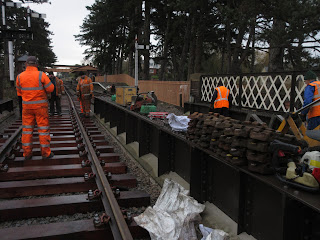 The main team was working on the down line on the bridge. A big pile of Pan 11 base plates was brought up from Winchcombe, to be fitted on to some last remaining unchaired Jarrah sleepers still available. It was decided to change the rail we laid last week on the down line, in order to avoid having to buy a very expensive set of hybrid fishplates. That pair of rails came out, and another was put in, which was quite a juggling act in this confined space. 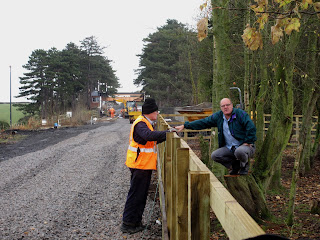 We had many interested onlookers from our neighbouring caravan club, all positive about the railway coming to town. John was happy to explain what we were up to. 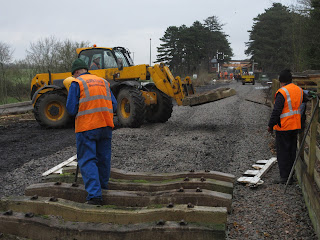 A third team was occupied with lengthening the sleeper run on the southern rail head.

The two wagons loaded at Skew Bridge on Wednesday were brought up, and this enabled Alan to start bringing in concrete sleepers to continue placing them past the goods shed. 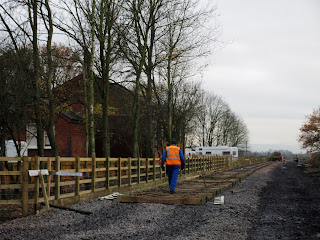 After a while we were well past the goods shed with the concrete sleepers, and approaching the corner of the fence.

That's officially past the goods shed then. No time for rails yet though. 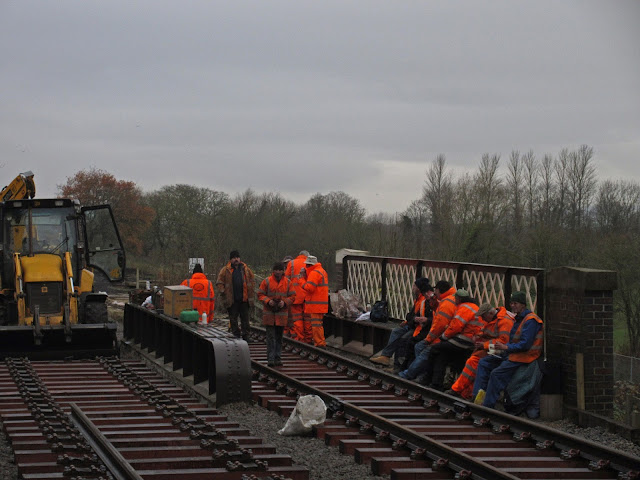 Lunch was sandwiches, taken in the drizzle while sitting on the ice cold bridge beams. Quite a change from Wednesday then. No hot food here, just a cold salad from Mrs. Blogger, supplemented by a slice of Mrs. B's best sponge cake, the tin parked in the rain but with the lid on to keep the cake dry. 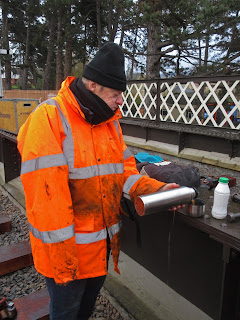 This volunteer was wrapped up to his chin, hat pulled down to his eyes, a lukewarm cup of coffee to fight off the cold.

The drizzle stopped for a few moments, then resumed throughout the afternoon. 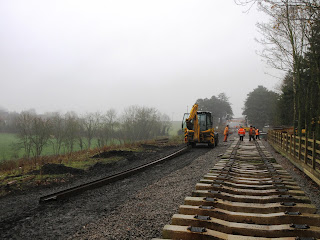 After lunch the rail changing by the bridge was largely completed, and at last we were able to go and fetch some rail. 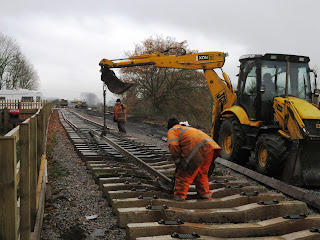 Steve, Bert Ferrule and Nigel laid in 3 lengths alongside the goods shed, and the railhead moved further towards Broadway by another 55 metres. Easily done, that. Behind the camera further sleepers were being laid down. 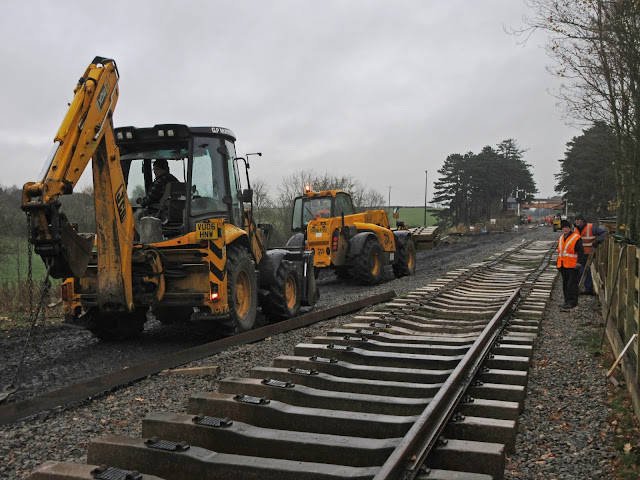 It was a bit of a traffic jam up on the embankment, with Steve trying to lay in rail, and Alan trying to get past with loads of concrete sleepers. 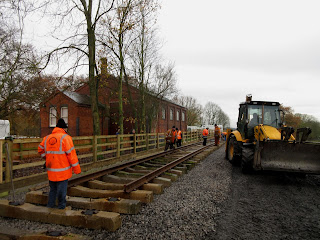 This is where the railhead was at mid - afternoon, clearly well past the goods shed.

A small group is clipping the rail just laid with a few basic clips, to make it stable. 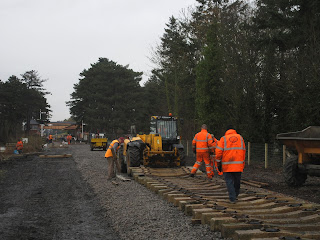 Alan continued to bring sleepers. A brick was put on top of one of the fence posts to warn us not to go too far, as we would be in the territory of the turnout to be laid.

This turnout is likely to keep us busy for three weeks, judging from previous experience. 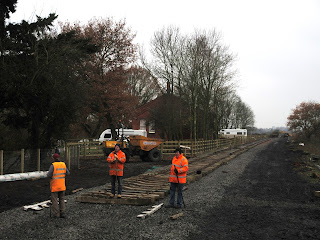 Almost there! The sleeper laying team has only 4 more sleepers to lay, to reach the end of the plain track on the main line. 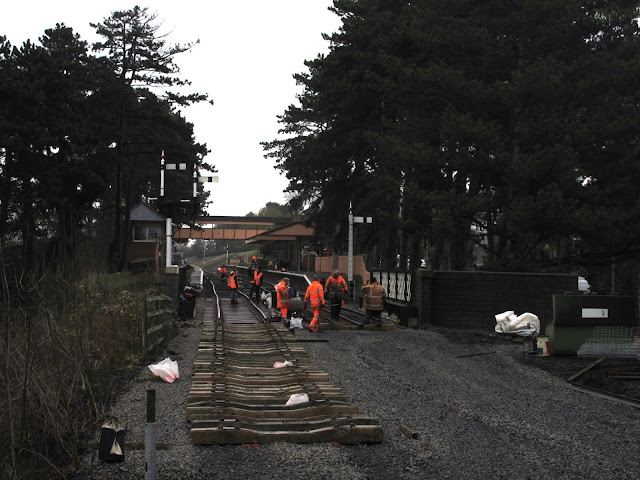 Looking the other way, we can see double track now right through the station, with a last rail on the down line about to go in (the replacement one). From here you can see the long curve that goes right through Broadway station now. 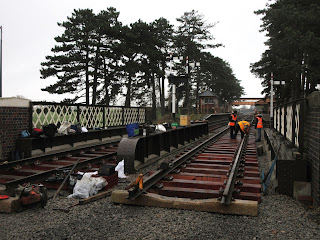 The last rail on the bridge has gone in, and is being clipped up by a small gang here; some younger members under the supervision of one of the old hands.

Jarrah sleepers are used on the bridge, reverting to concrete once the track is back on Terra Firma. 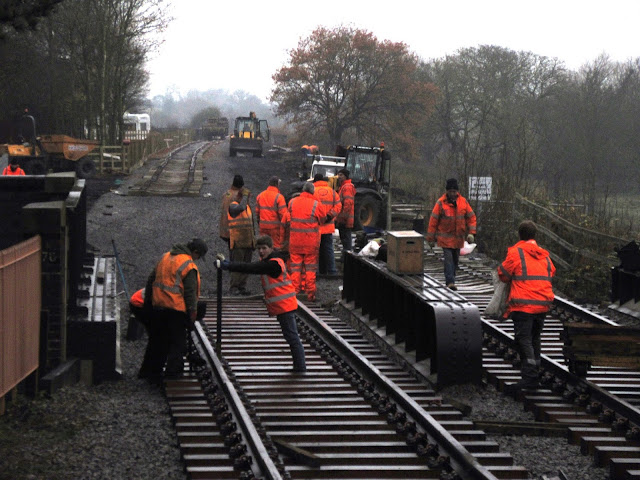 This shot, taken from the end of P1 at Broadway, shows just how close the two rail heads are right now. 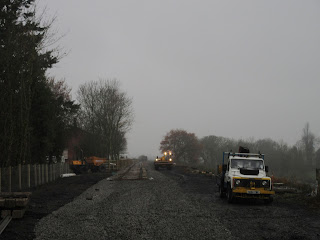 On a normal day you can see the hill above Greet down the end of the trackbed here. Today - nothing, it's a whiteout. That's bad news, it means it's going to rain, or is already raining.

The gloom descends over the site, and the Telehandler's headlights are used to stand out in the greyness. Even more sleepers are on their way, where are they going now? 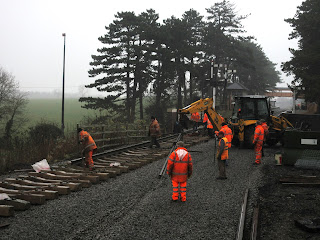 Meanwhile, the main gang has found a moment in which to lift in a pair of rails on the down line sleepers laid first thing this morning. 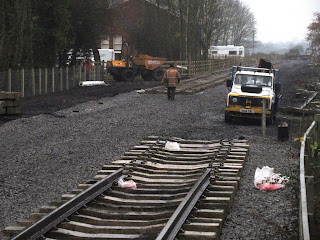 With these rails laid in the foreground, the two rail heads were only some 50 yards appart.

Now to get a turnout in here. 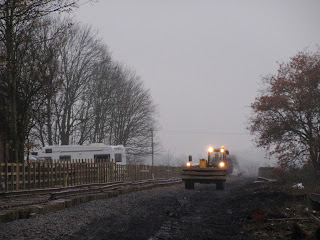 And still Alan brought more sleepers out of the gloom. Our last hurrah would be to extend the sleepers off the bridge on the down line, that's what they were for. 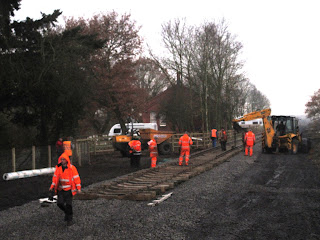 And another pair of rails went in, this time on the goods shed section, using the sleepers just laid to the end. 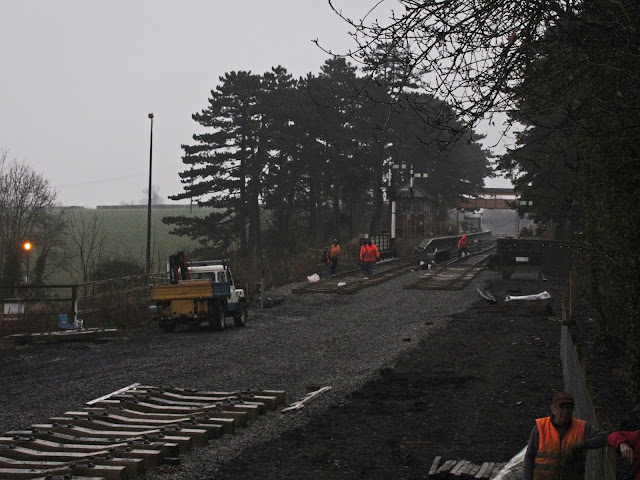 And this was the situation at the end of our cold, wet and now dark day. Only a handful of sleepers remain to be laid on the down line to bring it up level with the up line on the left. Another pair of rails can be laid in in the foreground.

Then it's the pointwork in the middle, and we are united.
Posted by Jo at 18:34