The Wednesday gang suffered from a number of notable absences today, due to personal reasons. A slightly reduced, but no less willing gang under the leadership of Robert split into three today.

1. To clip up the last three panels on the extension (the hottest job)
2. To bolt down the shelter bench at Hayles (brought their own chairs, sat in the shade and watched the trains go by; it's a tough job, but someone's got to do it)
3. To stack more sleepers at Skew bridge.

The landie busied itself round all three sites, delivering bearers to Gotherington, a generator to Hayles and bags of pandrol clips to the rail head. A report from a  DMU driver and by those there today finds that the DMUs stop there quite a lot, 5 times out of 6 yesterday for example. One enthusiast frolicked around the halt all day long.

We kicked the day off by going up to the rail head via Little Buckland. 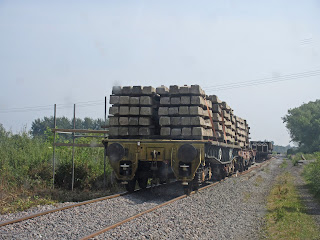 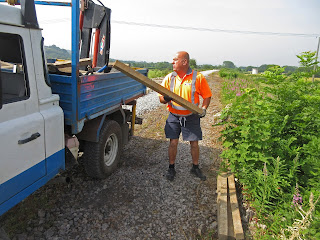 Bearers neatly stacked by the lineside from Saturday's sleeper laying were found, and loaded into the back of the Landie.

Now to go and find the others at Skew bridge.

A gang of 5 remained in the full sun on top of the embankment to clip up the last three panels laid. 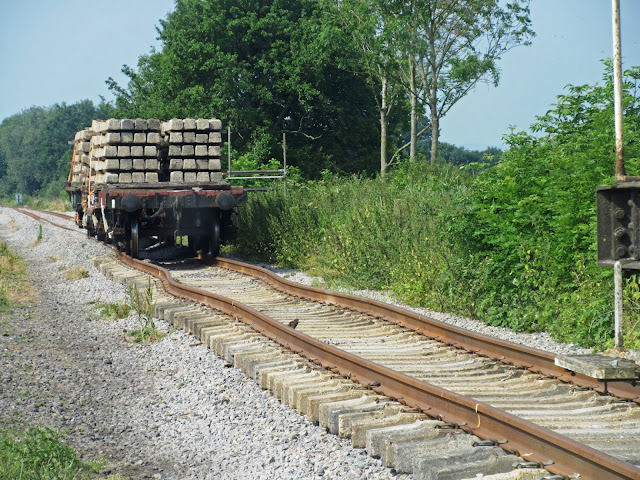 We then drove the loaded Landie back down the trackbed and - whoa, what's this? The incredible heat we've been having these last 5 days has pushed the rails out of line here. Luckily it's not serious, this part of the track has not yet been stressed, ballasted or clipped up. Interesting but not surprising that the buckle took place between two heavy groups of vehicles on the loosely laid track - it had nowhere to go. 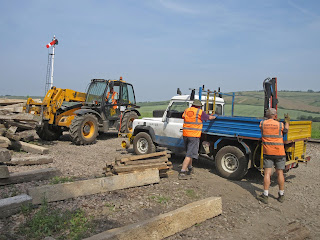 After arrival at Gotherington we offloaded the bearers, finding that the gang of 4 there had already made a good start. How did we notice this? 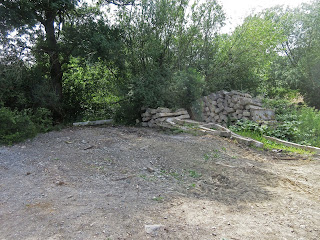 Another of the piles of sleepers has gone! Just the one sleeper left there on the edge of the jungle. Quite a few rejects hidden in the back of this pile too.
The next pile is quite small, then there's another big one, and we think a smaller one behind it, but completely overgrown. We'll have to see what is useable when it eventually comes out.

Now on to Winchcombe to get the genny for the guys at Hayles. Seeing all the doors to the C&W woodwork shop open, we stopped by to thank the team there for the very professional job they did on repairing the GWR stationmaster's table for Broadway. It really looks smashing. 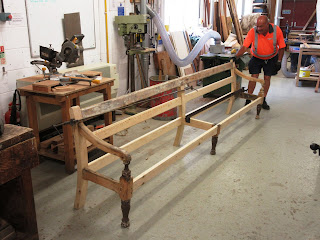 Imagine our pleasure in finding that they had also made a start on the GWR wooden platform bench. This was from another GWR steam railway, where it was felt to be too badly damaged to repair. Not for our guys - just look at the magnificient job they are doing on it. These all-wood platform benches (designed to stand under the canopy, you can see one in the 1904 trackside picture of Broadway) are pretty scarce, so we are lucky to find one. Eddy and Colin have made a smashing job of this too, just the planks left to go on it, it would seem. 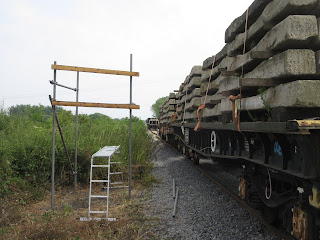 After dropping the genny off at Hayles, we carried on to Little Buckland, with 200 Pandrols on board for the clipping up gang.

We found the B&S gang by the sleeper wagons, busy building some sort of a framework next to the track. We can't tell you what for, it's a surprise, so you'll have to wait and see. 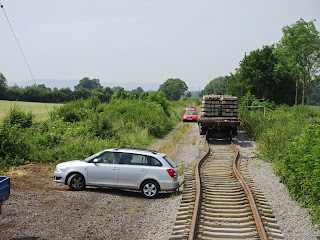 By now it was getting quite hot - the temperature was 32 degrees C at the end of the afternoon. Here's a view of the buckle in the unstressed track, in between the sleeper wagons and the 6 Dogfish. that will be sorted out when the train moves along, and the track is cut to size and stressed. 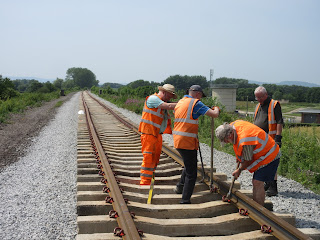 At the rail head, we found the clipping up team grateful that we had brought them another 200 clips to do (No, not really, they didn't really thank us for this gift)

Clipping up is slow and tedious. Just look at the seemingly endless expanse of clips behind them. And there's plenty more where they came from.

Our arrival was the trigger for a lunch break, taken in the shade of the trees by the goods shed. 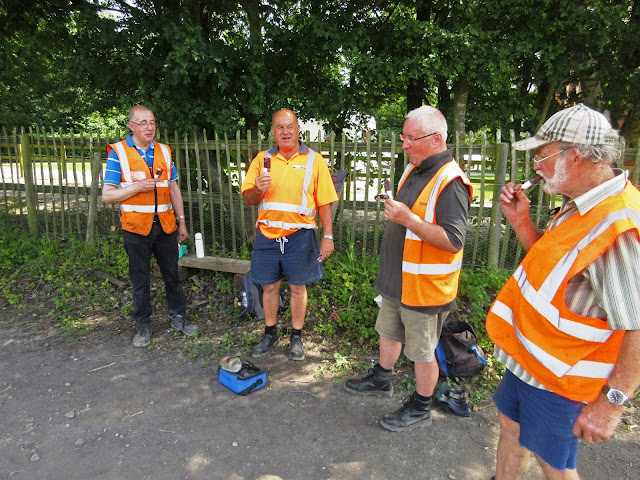 We are now so close to Broadway that we can nip down to the garage shop and buy 5 ice lollies. They were the last ones too ! Hope they get more for tomorrow, we are back on riveting the canopy again, and that gang likes ice lollies too. 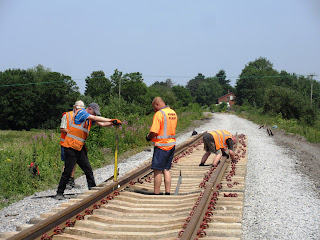 The Landie crew joined in with the clippers and had one last push to get the job done today.  The newly laid track is now fully clipped up right up to the penultimate panel - that last one has two rails in the 4 foot and is best done when they have been laid.

Close that gap with sleepers on Saturday? At least it will be cooler then.