We laid an amazing amout of sleepers today, and made a great leap forwards towards the Childswickham Road bridge. Because the next load of rail will only be delivered on Monday, the whole gang concentrated on laying sleepers, and at the end of the day we had laid a superb 260 of them, well over half of the newly arrived supply train. Only 84 sleepers now remain aboard. 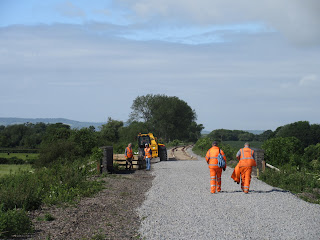 It was breezy, humid and often sunny day, one which left us shivering and sweating at alternate moments. Here we are walking down to the 'coal face' first thing in the morning, having car pooled to the rough new car park at Childswickham. Nigel is already on site and has spent the time well - several big piles of sleepers are stacked by Pry Lane bridge, waiting for the JCB and the rest of the gang to start work. 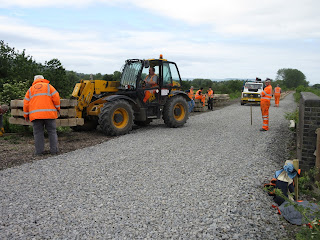 The sleeper piles are stacked on the bogie bolsters in piles 5 high, so when they are brought, it is in lots of 8 or 12 sleepers. Nigel managed to bring lots of 12 every time - must be some fancy juggling going on at the unloading point, but it really accelerated the supply flow, especially now that the journey to the train is so far. It's way behind those trees in the distance there. 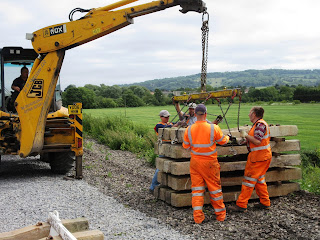 The stacks waiting to be used were quite high - this is how high they are on the wagons. 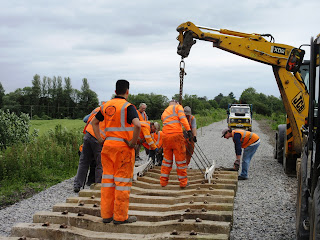 We had a surprisingly large turnout today, so while a gang busied itself with slinging the loads and dropping them along the track - using a new blue alignment rope to replace the one stolen - another went back to the anchor point to finish clipping up the fifth panel that the Wednesday gang didn't manage to do. 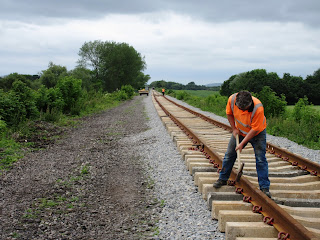 The panel with its 100 clips took about an hour, and at the end of it Paul went round with a keying hammer to give every clip another tap, to make sure it was well in. He got quite a rhythm going - tap, step - tap, step - tap, step, then we went back to join the others actually laying sleepers in the approach to Pry Lane. 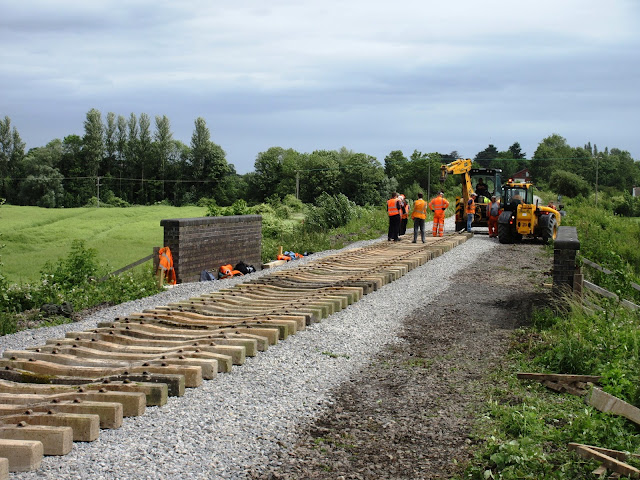 Great was our surprise to find that they had already reached it, and indeed motored on through. It was so quick they even had to move our rucksacks to the other side, as they were now in the way on the right. 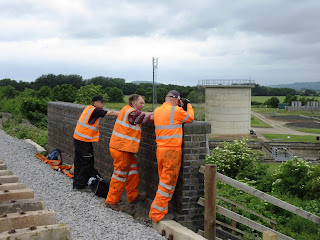 Sadly it was too late to take a group photograph on the bridge, as they team was increasingly far away from it. Some of us did manage to look over the parapet though, to muse on the goings on beneath, and what were our neighbours up to. 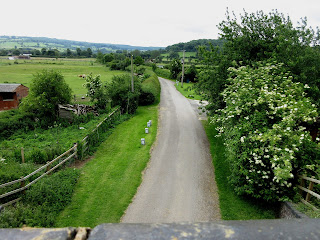 This is the view from above, looking towards the Cotswolds. It's a dead end, by the way, and there really is nowhere to park. Behind the camera is the entrance to the sewage farm, and they don't like it if you block their access, as they often come round with huge lorries to collect solid waste for treatment elsewhere. 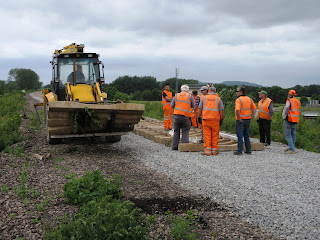 Eventually the laying gang got through all the piles within easy reach, and while Nigel was still far away getting more, Steve went off in the JCB to pick up some in the forks that were too far away to get in the slings. Here's another 4, guys! 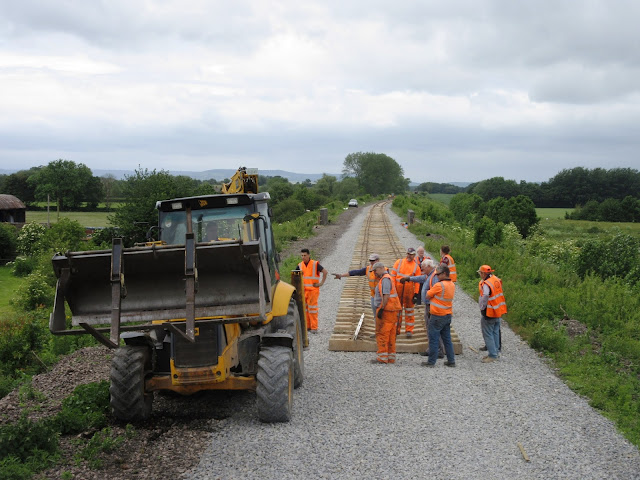 During this natural pause there is time to climb up on the Landie and take a photograph from higher up, to show you how we are doing. We started the day two panels on the other side of Pry Lane bridge, here in the middle distance. Pretty straight row of sleepers here too, if we might permit ourselves a pat on the back. That's thanks to John, who led a small gang and with his eagle eye straightened those sleepers that were a bit out of line. 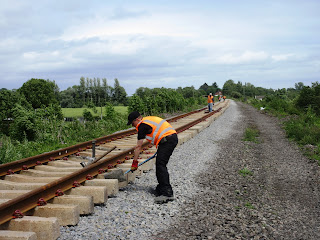 Another valued contributor who often works unseen is Leigh here. What he's doing is jacking and packing, single handedly, the joints between the rails so that they are level and parallel. This ensures that the welders can weld a straight joint, and not one with a humpback, which is what can happen if you give them undulating track with rising ends. 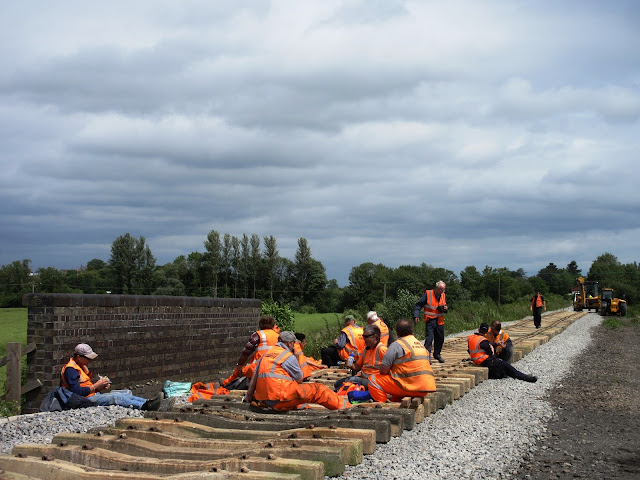 Lunch was very pleasant and was taken between the walls of Pry Lane bridge, to shelter from the fairly strong wind, but still enjoy the sun, when it was there. We stayed dry all day - result ! The sky looks a bit menacing, but it was still hot and humid. Our own picnic lunches were complemented by sponge and lemon drizzle cakes baked specially for us by Mrs. B. 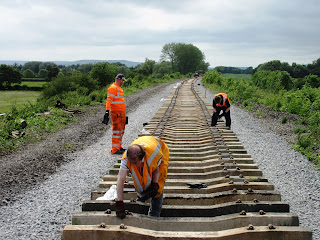 After lunch sleeper laying was briefly interupted while the laying gang attended to a panel by the former PWay hut site that needed some work. In the meantime, the rest of the gang laid out the pads, plastics and clips on the stretch north of the breather, which will be normal track with fishplates (and alternate welds). You can see a vast row of pads receding into the distance here. This stretch is ready for laying in the rail now. 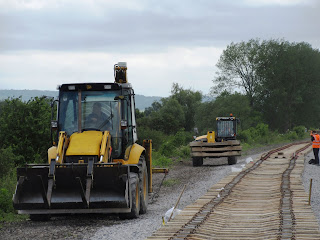 With the one panel job by the former PWay hut complete, Steve returned to the 'coal face', hotly pursued by Nigel bearing gifts. 12 of them. Great..... 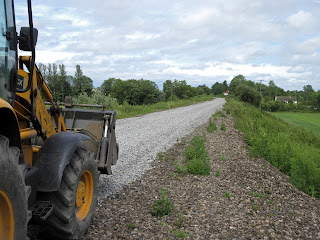 From Pry lane onwards, the single track we are laying slowly begins to switch sides, ready for entry into Broadway on the down side (Cotswolds side). You can see what happens in the picture, where the space on the right gets smaller and smaller. So how do you drive up the track with sleepers from here on? Somehow, you have to switch sides. 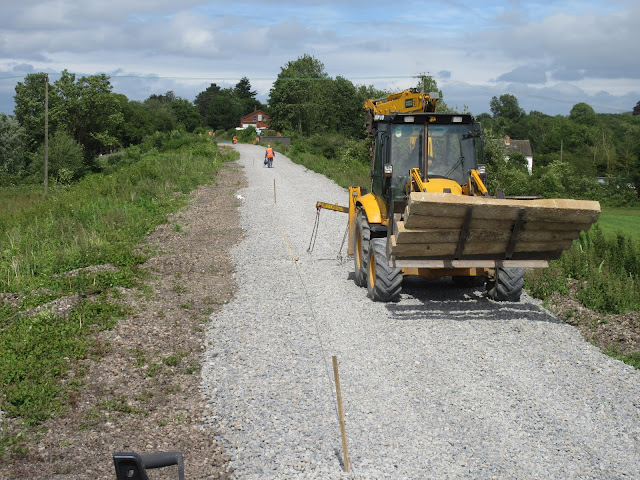 From the Landie, parked near the end of the sleepers laid, you can see that the space on the left is opening out now. What we are going to do now is to start laying from the Childwickham bridge, back down to here. So doing we keep the gap in the middle open, and this allows the Telehandler to keep on bringing up supplies of sleepers. 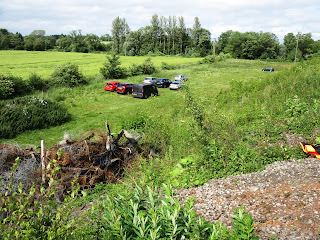 From this point you can also see now where we have parked, on a rough strip of land that belongs to the railway.  The Childwickham road on which we exit is in the row of trees on the horizon.

That pile in the foreground is a huge knot of old fencing material. 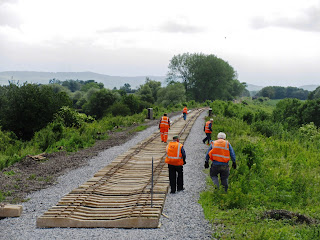 Looking the other way, back south, you can see the graceful sweep of sleepers laid today, all 260 of them. We think that is a record. Pry Lane is just a memory already, it was so quick, your blogger missed it! 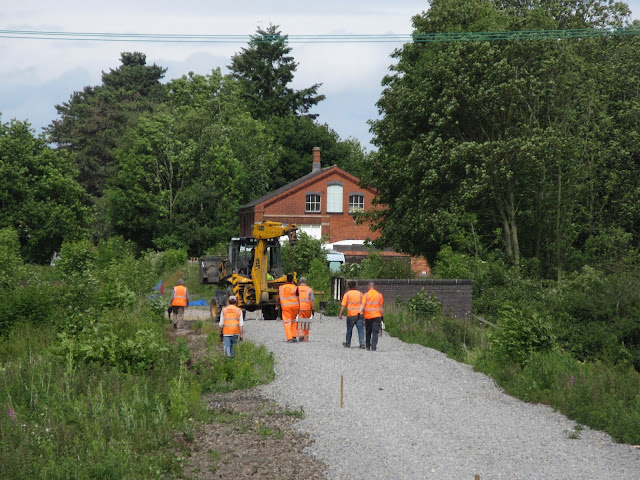 Using the zoom lens from the back of the Landie now, you can see how close the Broadway goods shed has become. You can almost touch it... well, actually, we have a cost accountant among us, and he advised at the beginning of the day that we needed 450 more sleepers to get to the bridge first thing. We actually laid 260 of them today, which leaves only a much more modest figure of 190 to lay next time. Before you jump up and down with excitement, remember that the supply train only has 84 sleepers left on it, so it won't happen next time. In fact we cannot reload for another week, as next Monday is occupied with the rail delivery.
In the picture, Steve has brought the first 4 sleepers up to the bridge, and then fetched another 4, the last ones we had at the end of the sleepers laid. 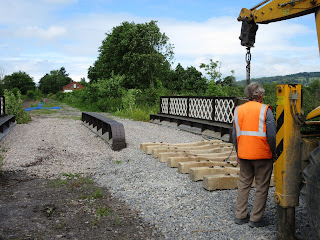 So this is a pretty momentous photograph: Sleeper laying has reached the Childswickham Road bridge ! Well, only if you forget about the gap in between, with another 190 still to go. But what an occasion. It's been a long haul up those long straights, all the way from Laverton loop. Three kilometres and more.

The service road is now on the left, or up side. 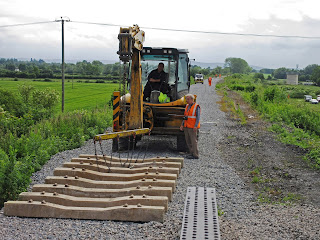 The same occasion, looking the other way. In our next session, we will be laying back towards Toddington  from here.

Ivor and Steve savour the moment, after a long, hard and sweaty, humid day.

The end of the sleepers laid is approximately where the Landie can be seen in the picture.

A stone's throw? Yes, just about ! 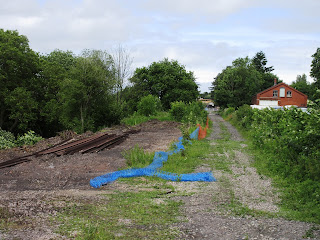 On the other side of the bridge is now our rail depot, essentially the rail form Laverton loop, less that already taken up to Broadway north. This area is now officially part of Broadway station. On the right was a ground frame, released from the signal box, that controlled access to a fan of 3 sidings to the right of the goods shed.  Straight ahead were the main up and down lines, while on the left was a long refuge siding. You can now see how wide it all once was. Our relaid line will run along the fence on the right. 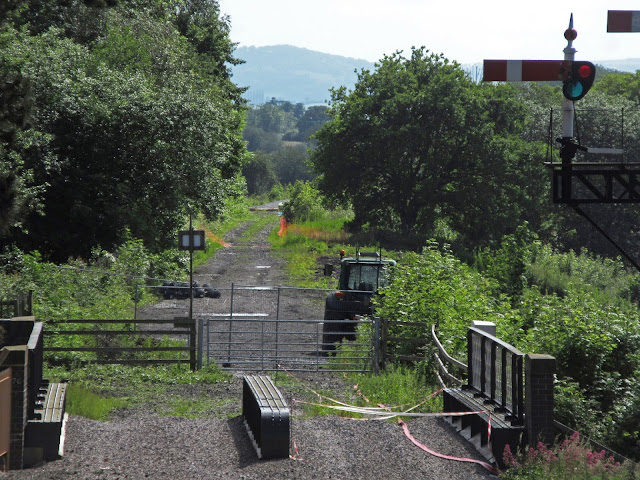 This is a view looking the opposite way, across the goods yard area in the middle distance. It was taken from the station roof, and the loco guys working there today did indeed report seeing some 'orange jacket' activity in the distance, a sign that the PWay crew is on its way. Not long now.
You can just about make out the 8 sleepers laid at the end of the day, with the still empty ballast bed behind. The soil nailing goes up to the big tree on the right. 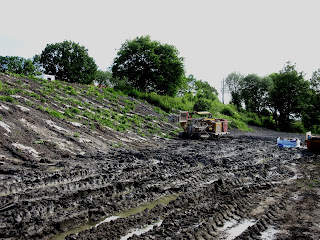 How are those soil nailers doing?

Well, as you can see here, they are almost at the end. The rain recently has slowed them down a bit, but that's only temporary. It has caused the bottom to be badly churned up though.

The big tree in the previous picture can now be seen on the top of the embankment. 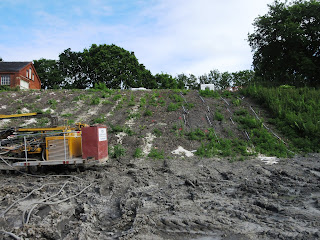 Looking straight up, the very small stretch still left to be done is apparent. It looks like about 30 nails still to be driven in, just 1 - 2 days work. After that the caps have still to be placed, and the wire mesh put out on top. This is followed by some site reinstatement works, but the end is definitely in sight here.


Finally, a curiosity found on YouTube, where you can see what can happen to CWR on a very hot day in a hot climate, in this case Australia (we don't have a hot climate in the UK!)