We were honoured to receive a visit from Steam Railway today, to lend us a hand with volunteering. Every little bit helps, you might say, but it's good to see the railway press take an interest in our extension.
Toby Jennings and Thomas Bright came down to muck in with the gang, then visit Broadway to see how things were going there. 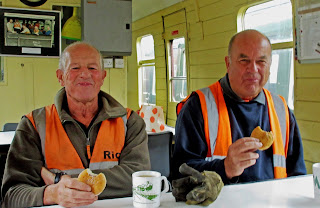 First things first, a nice cup of tea in the mess coach at Toddington, and, novelty here, some doughnuts brought in by Paul, an idea that has wafted over from the Hayles group. A good idea! The doughnuts seem to have found favour in the PWay gang, if one may believe the photograph. No nasty Dalmatians to sniff at them either.

After the daily briefing, we split into 3 teams:

- Sleeper stacking at Gotherington
- Repair of a joint in Toddington (urgent)
- Work on the extension.

At first it seemed as if only 4 volunteers had turned up. In the mess coach we were puzzled. There was a very large teapot of hot tea, and no one to drink it. Yet we were 20 souls booked on Doodle - where were they? 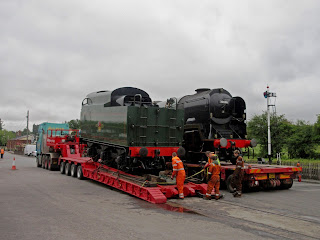 They were in the yard at Toddington, watching the pride of the P&O group being loaded on to a low loader, with its tender on a second one. The destination is the Mid - Hants. Some distraction for the gang then. 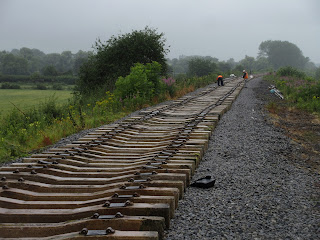 With the distractions, repair and sleeper stacking, we were only 3 to start with at Childswickham.

We decided to equip this long stretch of newly laid sleepers with the necessary pads, so that rails could be laid on them on Saturday.

Here you can see them just completing this task. 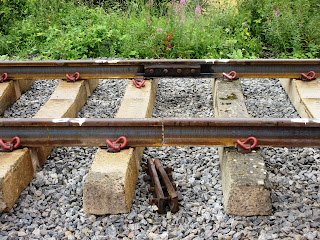 The Landie had to go to Winchcombe to fetch materials for the repair at Toddington first, but did finally arrive at the rail head with the rail drilling equipment. Here a sub-team of the extension one set out to continue rail drilling up to the current end of the rails laid. The Saturday team had managed a respectable 9 sets of fishplates mounted, and in the foreground is the next one, the tenth.

An issue we met was that the enormous heat we have had also affected the recently laid rail north of the supply train. A slight buckle could be made out, and many of the rail joints were all but closed up; others now too wide apart. It didn't stop us drilling the holes, but because of the ajustments required, we didn't get many fishplates mounted. 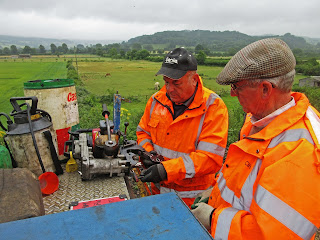 Here we see Martin and Clive prepping the rail drill, which needed a bit fixing to the front.

Then refuelling, and arranging for a supply of cutting fluid in the pump. 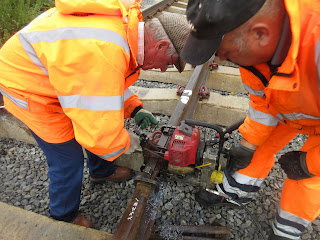 The rail drill is mounted over a base plate, which ensures you drill the two holes in each rail end exactly the right distance appart.

You also get the choice of holes for 95lb rail, or 113lb. Of course the hole spacings are different! 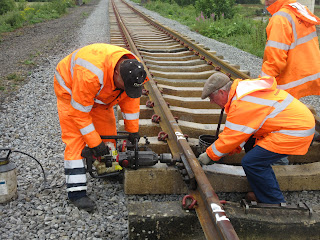 After drilling the first of two holes, it becomes apparent that the sleeper is too close to drill the second. You need to move the sleeper. The jack to lift the rail off is 1/4 mile away in the site safe; the Landie has gone to Winchcombe to get more Pandrol clips. One brave volunteer carries the heavy Duff jack the whole distance,  but now we are clear, the second hole is drilled and the fishplates can go on. 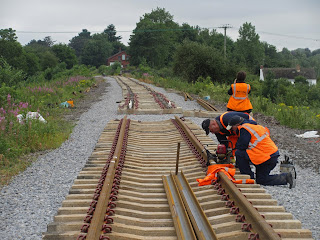 Beyond is the gap to allow vehicles to cross, then more sleepers up to the bridge. 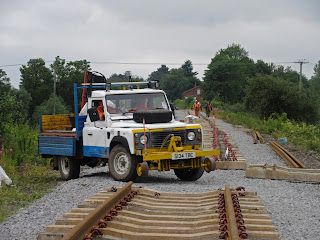 That gap for vehicles is in regular use. Here is the Landie, returning from a Pandrol clip delivery run. 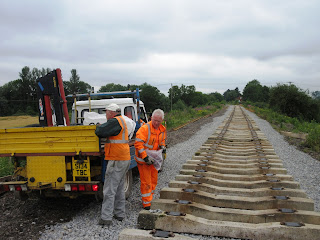 The pad laying sub team finished their job, and then turned to laying out Pandrol clips. These were taken off the Landie in bags, and dropped alongside at regular intervals. Not too much carrying here then. 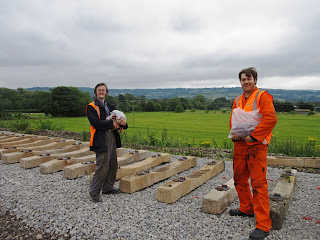 Laying out the Pandrol clips was an ideal job for the team from Steam Railway - here they are, Toby and Thomas, with a bag each. Thanks for your help, guys! 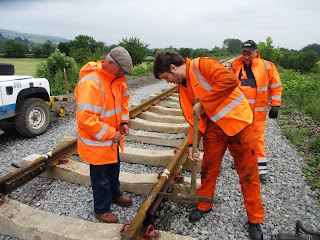 Thomas also helped with adjusting the fishplate spacings. The rail was moved along a few millimetres by using wedges to prise open the offending joints. Clive hovers with the tape measure. You can't wedge the rails back if you overshoot. 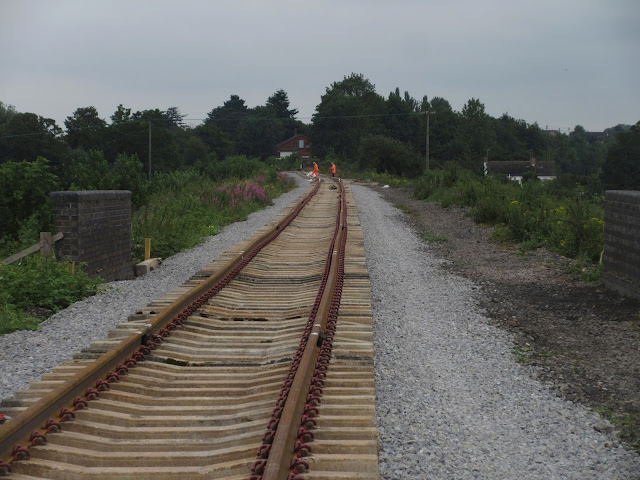 A shot near the end of the day across Pry Lane bridge shows the clipped up rail extending into the distance. Just a few more yards to go to the next bridge, and the start of the Broadway goods yard.

The canopy team at Broadway have been on site several days in a row. Almost all of the steelwork is now assembled, with just a few extra bits to go at each end to support the wooden framework at the ends. 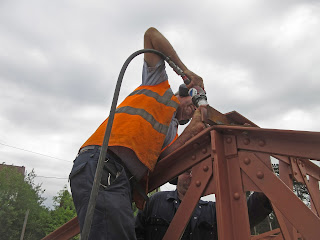 Generally speaking, it's been days of drilling holes followed by days of riveting. Yesterday was a riveting day, as tomorrow will be. We've done the easy bits along the fascia board, and have now been along the ridge purlin - the one with the arches - to attach the purlins to each other, and to the trusses underneath. 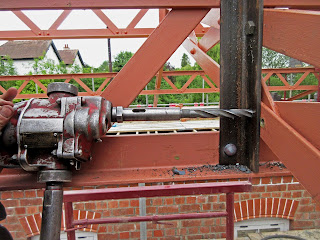 Although we drill the holes beforehand and fit them with temporary bolts, some minute lateral movement when they are removed for riveting can mean that the holes need further drilling out with the air powered drill. 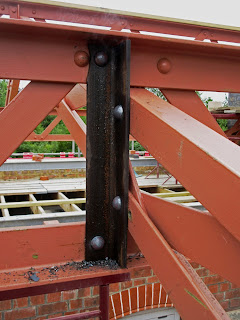 And this is the result - 4 neat rivets in the support for a middle purlin. This isn't coming apart!

The drilling residue has piled up at the bottom. It does happen that you think a hole is OK, a hot rivet arrives, and it goes only part way in. Stress! Luckily they shrink a bit when they cool down, so if you haven't hit them too hard yet, you can usually wriggle them out again. 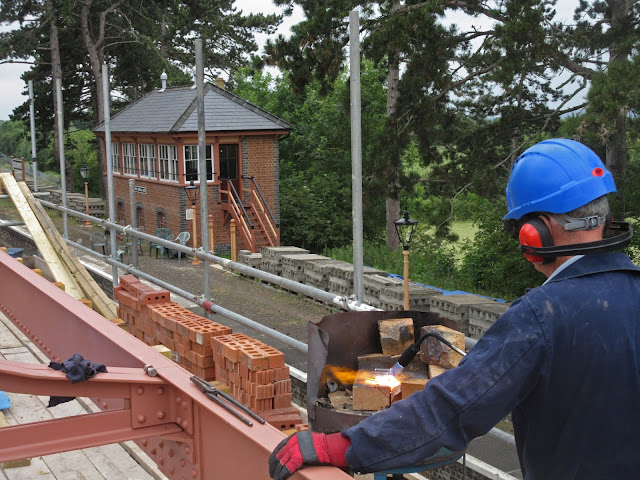 We worked our way along the platform side all day yesterday. Here is John on the 'barbie' heating up another rivet. They come in a number of different sizes, so it's best to ask before hand what the riveters want. Is that chairs outside the signal box?

We are now something over half way with the riveting up. Most of the platform side has been done; we still need to do the forecourt side, which needs rather fewer as it it doesn't have a fascia board. 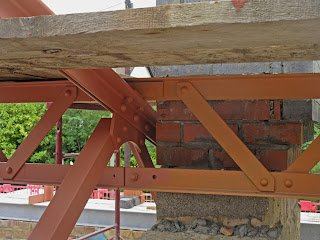 The fact that someone has built a chimney stack right through an area still to be drilled and riveted has made things very difficult for the canopy team here. Now what?

At Broadway north we caught sight of the S&T gang fitting a beautiful finial to the newly erected inner home signal. You might say, should they be using the signal's own ladder? Well, they had that with them in the back of the truck. One thing at a time. 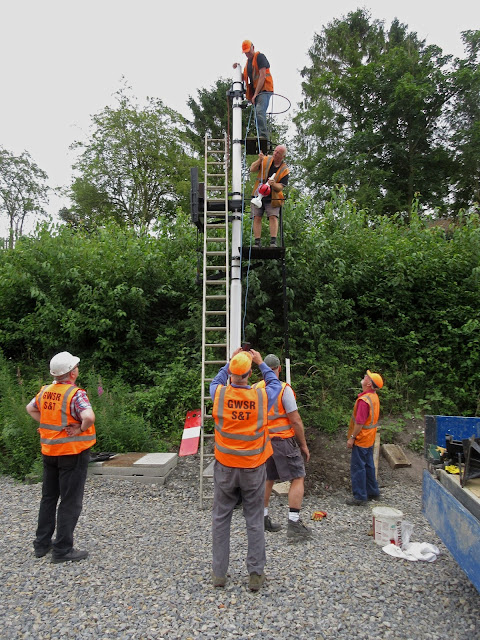 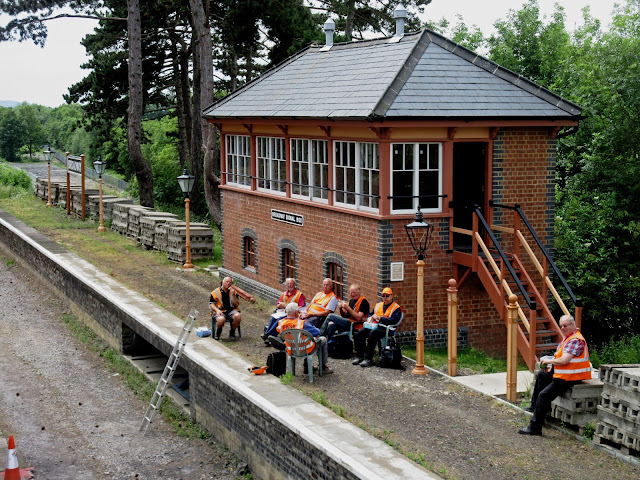 At lunch time, a set of patio chairs was produced from the locking room, and the kettle was on !

Finally, a little jewel from Broadway-to-be: 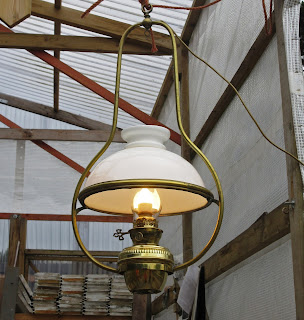 Heritage supporters at Broadway found a GWR station oil lamp at a railwayana auction. However, its condition on closer inspection was poor, but to our delight we were able to source an identical (non-GWR) example on Ebay, from local manufacturer Hinks in Birmingham.

You can read a bit more about Hinks here:
http://www.oldcopper.org/makers/joseph_hinks.php

The lamp is complete with burner, funnel and white glass shade, and is destined to hang from the ceiling of the booking hall. A member of the Broadway gang has expertly fitted a LED candle shaped bulb unit to it, with the supply wire hidden inside the hoop. Can you see it? It's little accessories like this that will make all the difference.