Getting ready to lay more track

Sleeper stacking last week allowed the train to be refilled on Monday, which allowed it to be taken out ot the railhead again, which allowed us to start sorting out sleepers again. Things are moving fast.

Today a gang went to Skew Bridge to sort even more sleepers, the stock having diminished since Monday by 360. Those jumbled piles are now shrinking like ice under the sun.

The rest of the gang went out on the extension. Some accompanied the Haigh Rail welders who were back, and some went to clip up the next anchor point for the CWR. 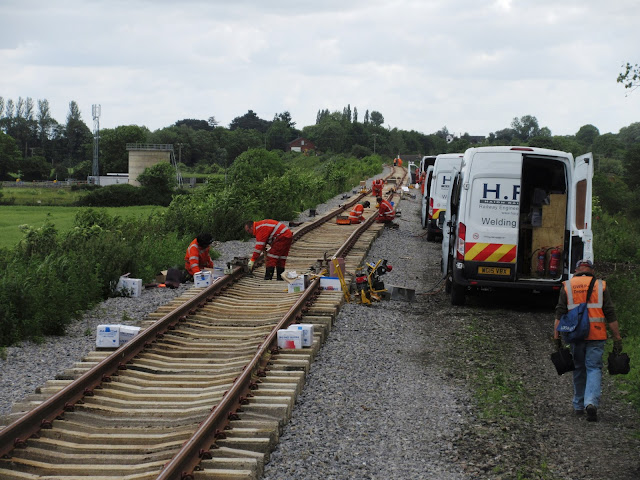 Here are the welders, at a point just beyond Peasebrook Farm. There were 4 teams of them, and they did exceptionally well. They completed 6 welds each, making a total of 24 welds done today. That's 12 lengths, or a total of 220m of welded rail towards Broadway. Soon they will be off the straight, and on to the curve, just like us track layers. 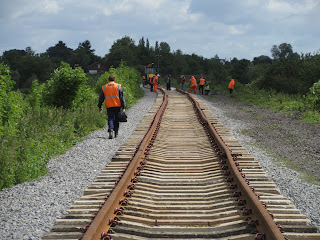 As we were bringing supplies of fastenings up to the railhead, we could not access the track via the new 'car park' at Childswickham. We had to drive along the track from Little Buckland for as far as we could, and then transfer everything out of the Landie and Dave's Disco and into - a wheelbarrow!
This was then pushed bumpety-bump past the 4 welding vans and up to near Pry Lane. Tongues were hanging out when the wheelbarrow, laden with heavy Pandrol clips, finally made it to the gang half a mile away.
Next: go back and get the heavy jacks. Oh no ! 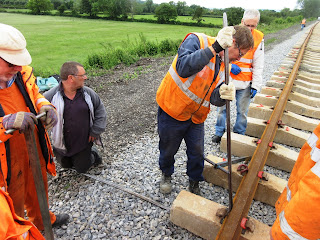 Most of the job today was to fully clip up the 5 panels of track preceeding the breather joint. This will be the new anchor for the last of the three lengths of CWR. It means a full set of fastenings on each sleeper, instead of every other one, lightly clipped. 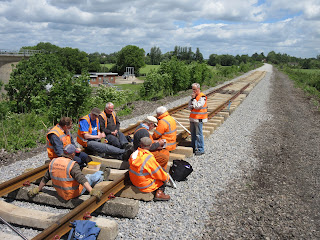 Lunch was taken 'al fresco', there being no facilities whatsoever at the railhead. The mess coach was at Toddy, and in the summer we do not take hot meals anyway. Luckily the weather was good today, a brief sunny lull between two whirling 'Lows' on the weather map. 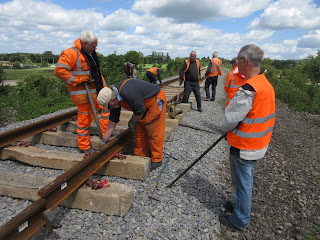 After lunch we split into two teams for clipping up, one on the Cotswolds side, the other on the Malvern one. It's quite slow work, as the sleepers often do not lie as they should and have to be barred one way or another, always as long as they are not jammed down by a rail lying on top of them.

In the end we fully clipped up 4 out of the 5 required anchor point lengths. That's 208 pads inserted under rail that needs jacking up, and 416 Pandrols pulled into reluctant sleepers. One more length to go now. 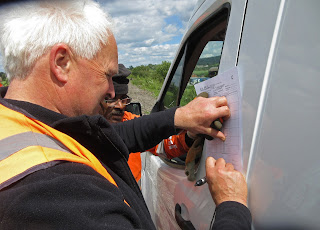 Towards the end of the afternoon Haigh Rail had achieved their objective of 24 welds, and came in their vans for us to sign off the work. We were very happy with them. 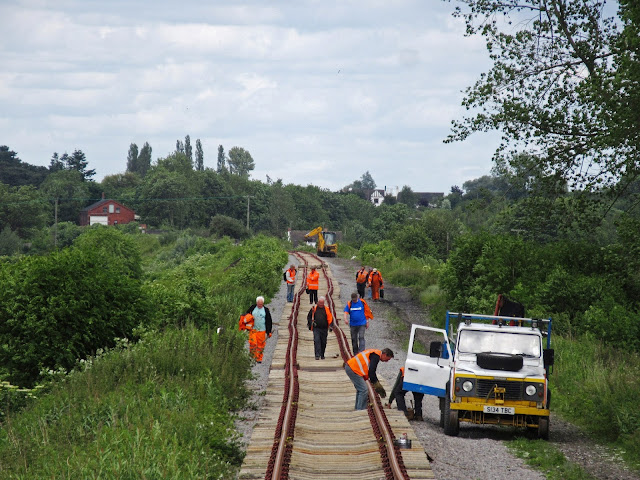 Then came the long trek home. Luckily, with the welders' vans now gone, we could run the Landie up and down to clear up the welding detritus, and recover the tools. Stevie with the JCB (in the distance) was also out and about, and cleared the pile of rails by Childswickham bridge (ex Laverton) by dragging it over to the other side on to the wider embankment there. This was to allow more clearance for vehicles which will travel south along the track in future.. 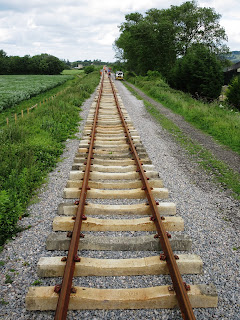 Without the zoom lens effect, the track looks incredibly long as it stretches past Peasbrook Farm into the distance towards Broadway.

When you walk it, the track laid seems to go on for ever. Up to the new anchor point / breather, we will have laid 3km of track from the old Laverton loop, all in CWR, and we are still several hundred yards short of Broadway, have to go through it in double track, and back out the other side into a new headshunt. Last mile, hah ! 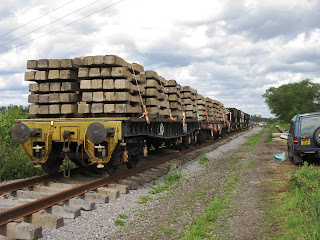 Back at the Telehandler unloading point, the new supply of sorted sleepers has arrived, after loading on Monday evening by a small, dedicated gang. Thanks to their additional efforts, we can now resume sleeper laying this Saturday straight away. The new rail is coming on Monday, and this will take us to the Childswickham Road bridge, and the start of the Broadway embankment.
By the time we arrive there, the soil nailing is likely to be completed, so they will not be in our way. 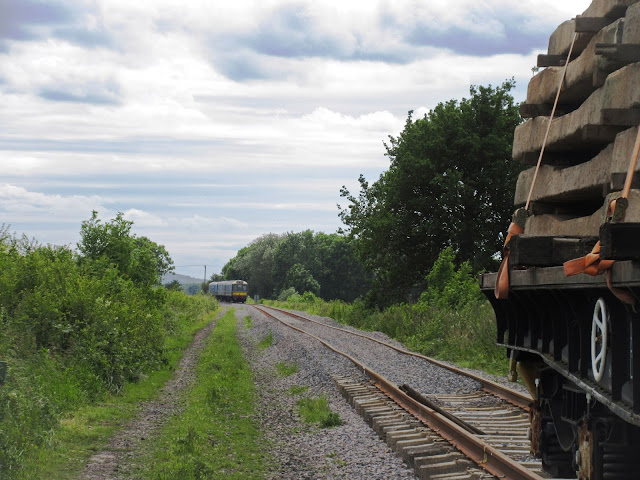 A last look today, now the other way. Newly sorted sleepers to the right, and in the distance the DMU arrives after traversing part of the new extension, now stopping just beyond Little Buckland. They're close on our heels, but we keep moving on!

The sleeper stacking gang at Skew Bridge have returned victorious, with another 148 sleepers sorted, making 180 on site, exactly half a train full. One more good day here should see the site ready for the next train load.

Here are some pictures they took: 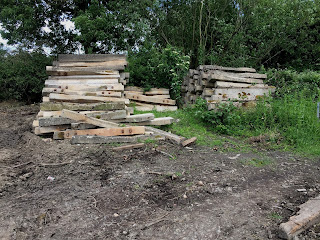 The number of sleeper piles remaining has been reduced to just two, with a remainder of one in the middle. 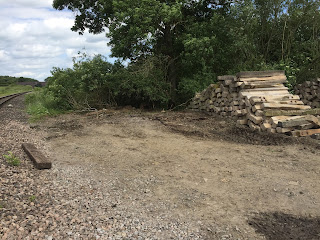 There's a big void where the first two (three?) piles have been removed, nearest to the track. 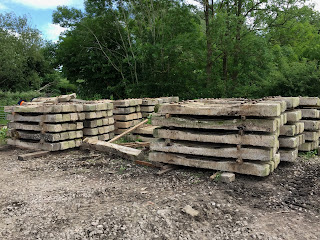 180 sleepers are stacked here, ready to be loaded on to the next train.