Part of building the extension is finding yourself a good supply of concrete sleepers. We have such a good supply! With some foresight years ago, a large stash was acquired which was put into storage at Gotherington, in a small triangle of railway owned land known colloquially as 'Skew Bridge'. 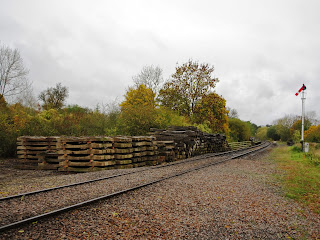 These two pictures give you an idea of what's at the site. It's a mixture of SHC (hoop) type and Pandrol type sleepers. In this picture, looking south, you can see a nice line of stacks with bearers in between - this is what a party of us came to load today.

The nice line of stacks took several days to achieve, as they have been picked out of the jumble in the picture below. The word 'mixture' gives you a clue. On delivery some years ago now they were unloaded under time pressure with potential demurrage charges payable, so they are not so 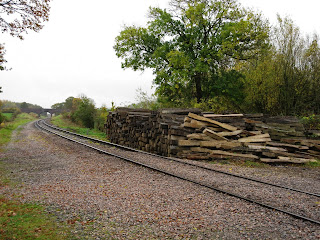 arranged today as to make for easy loading. In addition, trees had grown in between which needed cutting down and burning. The site is now clear, and the first stacks ready for the train.

The pile of lighter coloured sleepers are the rejects, discarded due to bent hoops or damaged concrete. Luckily the ratio is fairly low.

Today was a non - running day, so a PWay train went out, firstly to unload a corrugated lamp hut at CRC, and then on the return journey to pause at Skew Bridge for loading with as many sleepers as we could muster. 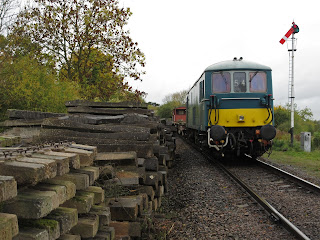 Here the Class 73 ED has arrived from Cheltenham with two Warflats, ready for loading and later taking up to the extension headshunt at Laverton. 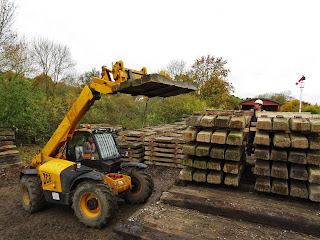 This is where our new(-ish) telehandler really comes into its own, and with an experienced driver at the controls the job of moving the heavy concrete sleepers is made so much easier. A concrete sleeper weighs between 300 - 400Kg, so is impossible to lift by human hand, although they can be manoeuvered around using bars. 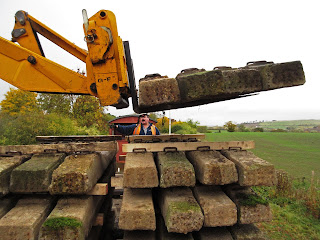 There was a group of 5 of us today, just the right number to act as banksmen, site supervisor and telehandler driver. The sleepers are put in stacks separated by bearers, which protect the hoops, and make unloading at the extension end easier too.

On completion, the stacks are secured down tight with straps. 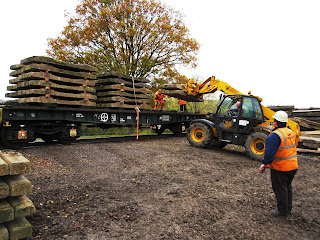 The day began with a site crowded with sleeper stacks, but as the day progressed, there was more and more room and this will make the task of sorting out further supplies somewhat easier than in the past. 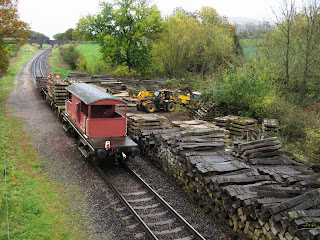 This view from the signal post gives you a good idea of the size of this small site, and the volume of sleepers that we have secured for the extension to Broadway. Plenty more to go after this train !

The weather was a bit miserable. A rainy start was forecast - correct - but it was meant to clear up at lunchtime - not correct. The steady drizzle actually increased to a point where we thought, this is a good time to break for lunch, which was held in the not-actually-very-roomy 'Queen Mary' bogie brake van. The 'roomy' bit seems to refer to the balconies, the interior being the same size as a normal non-bogie brake. But it was cosy; pity we didn't have time to light the fire. 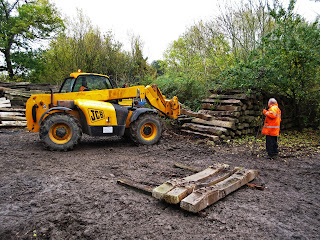 After lunch we loaded the remaining stacks that were ready. With some space still available on the second Warflat, we made up further stacks, extracting the sleepers from a  pile that disappeared into the undergrowth. On presentation upon the two bearers on the ground, the sleepers need to be barred into the correct position, and then checked for suitability. That's a bit slower than simply loading the from the ready stacks, but in the end what brought work to a halt was the exhaustion of our supply of wooden bearers. 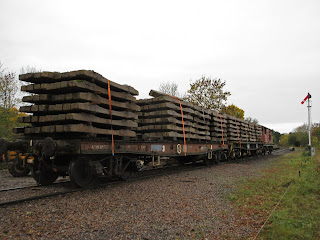 Here's the product of our efforts today - just over 400 sleepers loaded up, and a train ready to go. We were pretty happy with this.

The 400 sleepers represent 15 lengths @ 26 sleepers each, or a potential extension length of 270m. It should take us a good way round the bend towards Little Buckland bridge, the target of our first relaying phase. 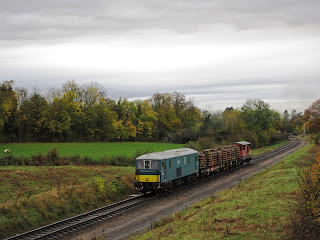 After a quick phone call, the ED came down from Winchcombe again to pick up the loaded train. Here it is setting off for Laverton again. 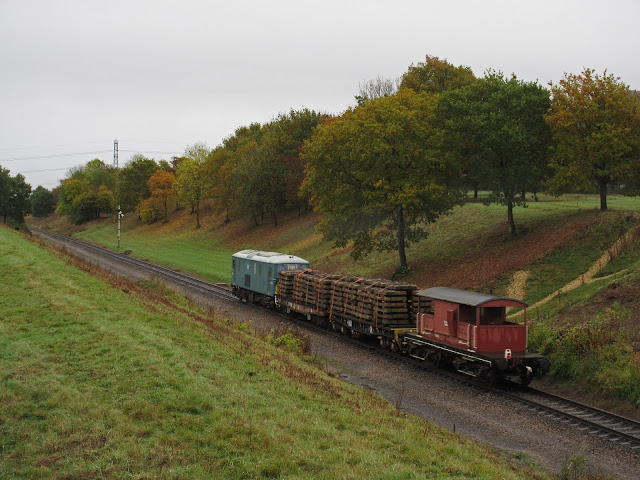 This little supply of sleepers will give the relaying gang something to do... probably two days' worth, the first of which will take place almost immediately, i.e. this Saturday.