And down they go again

What a fantastic day today! Blazing sunshine, good progress, plenty of cameraderie, and cake. There was a well drilled gang of 12 of us today, to see how far we could get with the 400 concrete sleepers loaded on Thursday. 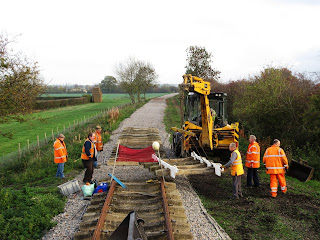 This is the situation at the beginning of the day, with the railhead at the start of the curve to Little Buckland. The two Warflats with the sleepers had been positioned just behind the camera, and 4 sleepers are being lifted into position at the foot crossing, so that rails might be laid over them and the crossing finished off to a basic level. 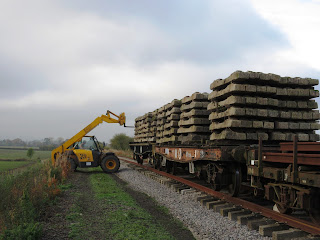 Then Alan in the telehandler started on the long job of transporting the sleepers in batches of 4 or 8 (and annoyingly, sometimes in odd numbers, which throws out the placement jig we use - must try harder, Alan).

It required a lot of skill to remove the top layer, as visibility of what the forks are doing is pretty minimal on the highest layer. Alan did well however, and soon had us buzzing down at the working end. 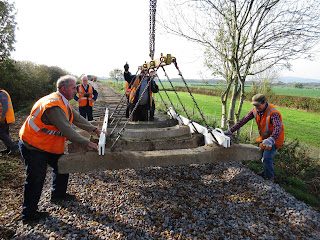 It felt like quite a milepost to start on the curve, after the long Laverton straight. At the other end of the curve, behind the camera here, is Little Buckland bridge and the target of the first track relaying phase. Here, it is still out of sight to the team.

Then there was a commotion in the distance, as the North Cotswold Hunt galloped past across the field in the background. They vanished behind a spinney, whereupon a fox ran out and hid in the ditch that leads away from the recently rebuilt culvert. We could only stand and stare. A deer ran out the other way, and then a red helicopter came in to land, followed by two first responder cars.

After a pause, the hunt resumed. Two quad bikes raced along the hedge up to the railway embankment, and without slowing down turned sharp right along the railway, so much so, that one went along on two wheels. Our jaws slackened... 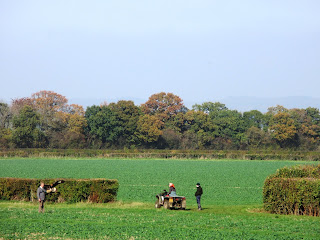 One quad bike then stopped to release a huge bird of prey. The wing span was as wide as its handler was tall, it seemed to us that this must be an eagle, as it was much bigger than a falcon.

The bird was released and flew off after the fox, which it duly found and despatched. 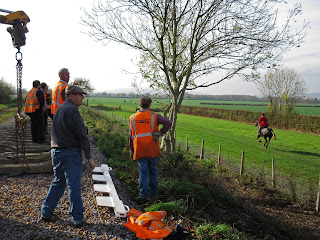 The dogs ran up as did a rider in hunting pink, but seemingly after the event, the bird had got there first.

By this time all relaying work had ceased, as we watched the events unroll before us.

To your blogger, there was a certain sense of pride and history - this is the countryside, and these are our neighbours. It is a centuries old tradition, and we were somewhat priveleged to have a grandstand seat to watch it all.


We resumed our own activities, that of laying track, but it seemed rather more banal after such excitement. 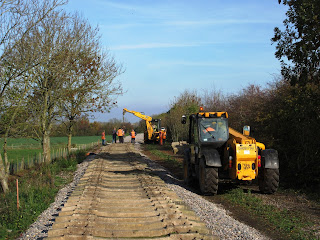 Thanks to the excellent weather and good turnout of experienced volunteers, we were well into the curve by lunch time, with the rearmost tree on the left representing the 150 sleeper mark. Here Alan is bringing another set of eight, which Steve in the JCB lifts on to the trackbed in groups of four using the two white spacers. 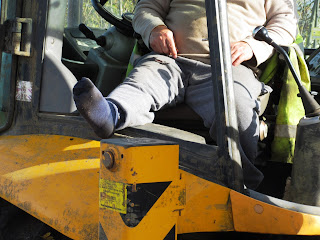 There was some hilarity as Steve felt the need to air his stockinged foot outside the cab, with much coughing and holding of noses amongst the gang.

In fact poor Steve had sprained it a few days earlier, and we can be grateful that he came nonetheless to play this key role in the JCB during our sleeper laying day. 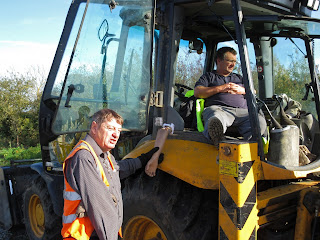 More hilarity ensued when Jim came up to 'give him a hand', which Steve turned down as he hadn't asked for a whole arm. (shades of Hancock's 'Blood Donor' here) 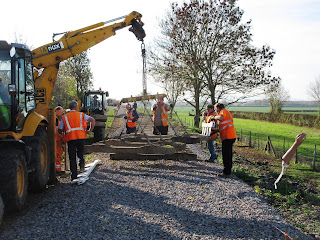 Finding no takers for his arm in the JCB, Jim stuck it on a pin to point us the way to Broadway.

Very useful, thank you Jim ! No 'arm in that, we suppose (and believe me, many more puns followed in that genre all afternoon) 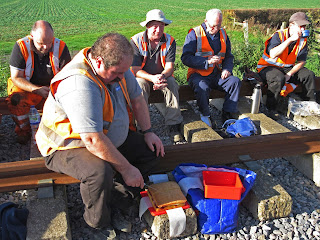 Finally, and with no mid morning break for coffee, lunchtime arrived and was most welcome. A slice of Mrs. B's most excellent sponge cake beckoned. 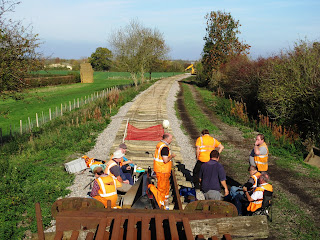 Seen from the top of the flats carrying rail, here is how far we had reached by lunch time. The JCB marks the limit of the sleeper laying at this point, almost out of sight. The haystack is where the quad bikes skidded round the corner on two wheels. 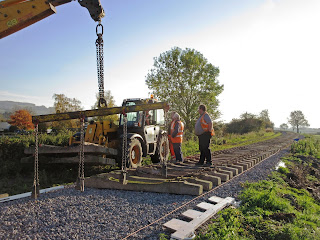 As the sun began to go down, we realised that, incredibly, we were going to be able to lay every one of the 400 sleepers loaded on Thursday, thus enabling the train to be returned to load some more. This made good logistical sense. It seems that laying 400 sleepers in a single day is quite a record, certainly in recent memory, beaten only once in a relay where all the sleepers were already on site, and did not have to be ferried in by telehandler from a train.

In this picture, the last load is just arriving. The mid point of the excercise today was a little this side of the trackside tree on the right, in the background. How far away it now seems. 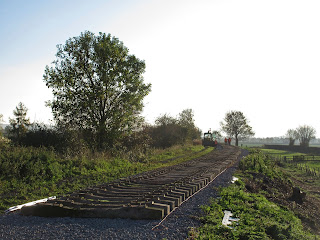 This is the end of the sleeper laying today. We didn't lay any rail, as emptying the two Warflats was our priority. The rail can be lifted in by a smaller team on the next available day. There is also some talk of further ballast spreading, from Little Buckland to bridge 4 at Peasebrook farm, so time will tell what gets done first, it all seems equally important. 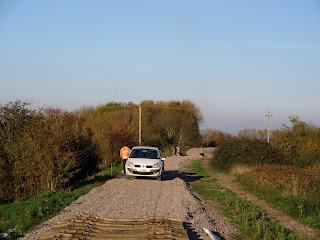 Looking the other way from the same spot - and with the golden sun behind the camera - we can see that the sleeper laying is now well within sight of Little Buckland bridge, situated between the two poles. 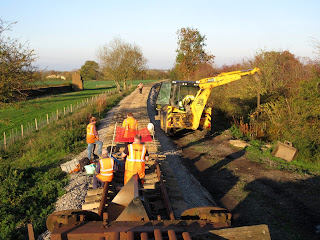 The last picture of the day is from the top of the flats again - compare with the opening shot - and shows the sleepers disappearing into the distance, and the gang packing up in the foreground.

This was a most successful day, and we left for home with a great feeling of satisfaction and much achieved.