The sun has taken his hat off again 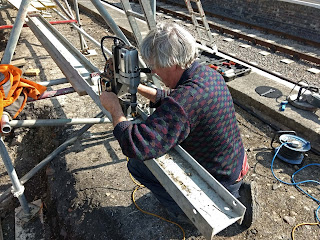 A slight change of plan Monday, as we decided to beef up the temporary canopy supports at the bottom of the steps.

Luckily we have in store these RSJs, which were initially purchased some years ago to support the P1 canopy extension under the non-historic roof plans. You would have seen these brutal RSJs, looking up.

Thanks to the canopy team, they will not now be used in the building, and are surplus. 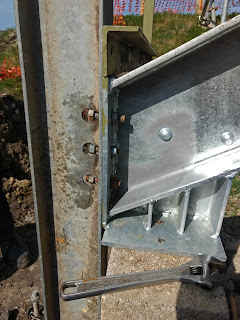 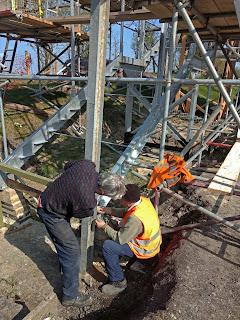 Neal drilled 3 neat holes in each, and in the picture on the left you can see him with John wrestle the first of the two up against the bottom of the stringers. On the right is the finished result. 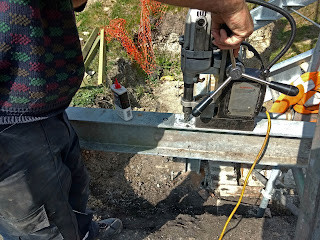 Neal then drilled 3 holes into the second RSJ, which was also fitted.

Monday being April 1st, we were visited by a Klingon who emerged from the trackbed, mumbling about a final front ear. His speech being somewhat unclear in our oxygen rich atmosphere we sent him on his way with our heartiest earthling greetings, but none the wiser about his true intentions. 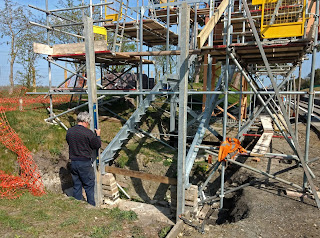 Just before lunch the second temporary canopy support went up, and here Neal is checking that it is upright and not out of true. 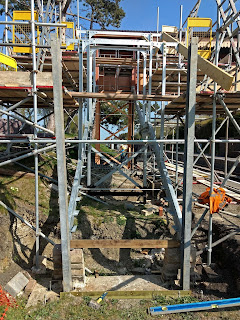 Eventually both their positions were found acceptable for a temporary installation, even if not perfect. 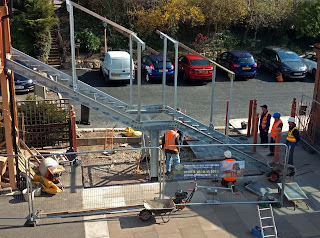 The Broadway gang, assisted Monday by John, had a gay old time finishing off the edging slabs under the future fence line, and then resumed placing slabs in the area under the lower ends of the stringers.

They will place as many slabs as possible, before the scaffolding is erected in this area on Friday. 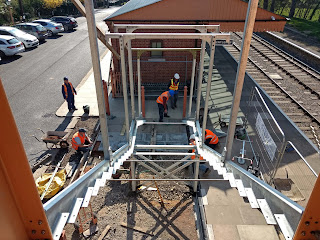 Here's a rare view of the slabbing activity from the top. No treads yet; they would get in the way of the scaffolding. 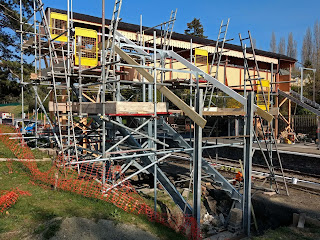 In the afternoon the first length of timbers along the roof hoops on P2 were primered, and a start was made on cutting and bolting on the other side.

The top length on the Malvern side remains to be fitted, then a number of cross timbers will be added, and these support the roof sheets. 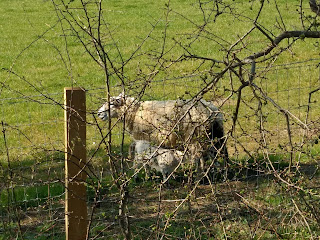 While we worked on Monday spring came to Broadway, in the form of these two lambs in the field next door. The weather was perfect for them. It was hot on Monday; we took off our tops but in the shade there was still a nasty nip in the air. 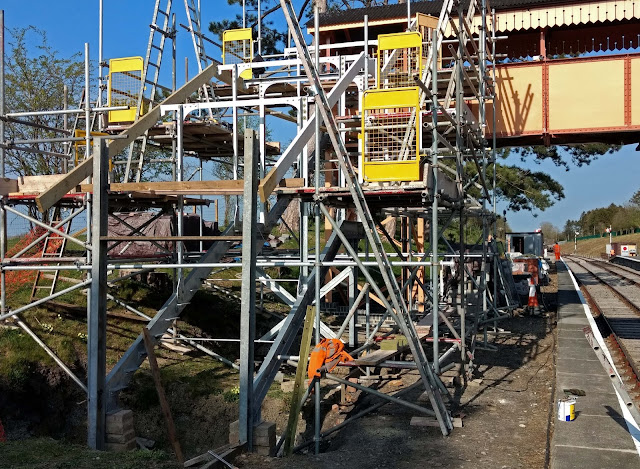 This was the view of the P2 steps at the end of the day, with new, improved temporary canopy supports and on the left, the second row of timbers on the roof.

The 'The sun has taken his hat off again' day. It started bitter cold at 0 degrees, although bright.

We settled down in the mess coach, quite numerous today, for tea and doughnuts.


There were several small jobs to address today:
- Rectifying track defects listed in the latest track walker report in the Gretton area
- Sorting out the GUV, it needs a tidy up after lots of stuff was flung into it
- Start of preparatory work on the Usk platform
- Disassembly of the third party turnout in the yard, ready for transport
- Removal of scrap not worth putting in the scrap bin. 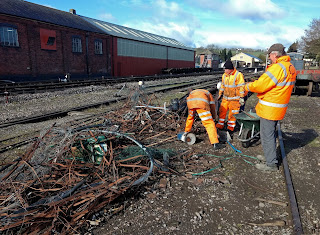 This is the scrap pile, after you have taken off everything that is likely to interest the scrap man (i.e. the heavy stuff).

The uninteresting rest was eventually loaded into the white Landie and taken to a skip.


Peter was in the Telehandler sorting out the bits to be collected by a member. He got this far with half of a stop block, then hesitated. 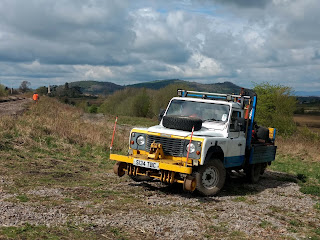 A party of 4 went to the Gretton end of the tunnel, where the track walker had reported a number (!) of cracked fishplates, as well as loose bolts and missing keys. We were a sort of 'hit squad'.

But which replacement fishplates to take? The variety available to us is almost endless. What if the lift required is 1/16th but you only have a 3/16th plate with you? Does an ought-ought plate fit a 95lb rail? Deep skirted or not? FB or BH? 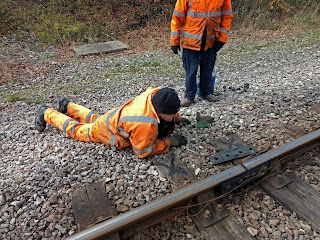 Like Paddington bear, we gave the plate in question an intense stare. It was only a 'suspected crack', but was it really cracked? It was hard to tell. Reported as possibly a 3/16ths lift it turned out to be 5/16ths and we didn't have that size with us, so we left it for another day. Keep an eye on it though. 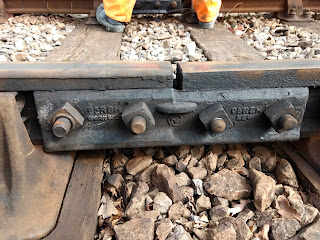 This is the (sister) plate in question, which, after a bit of scratching, turned a 3 into a 5 ( on the left). It's quite a high lift, that we could see, the rail on the left is far more worn that that on the right.
Another issue into the pot was that the gap was quite large (it was icy cold, remember), and there was a concern that it might ping apart if released and then that would stop the trains if we couldn't make ends meet again, as it were.

We shall revisit another day. 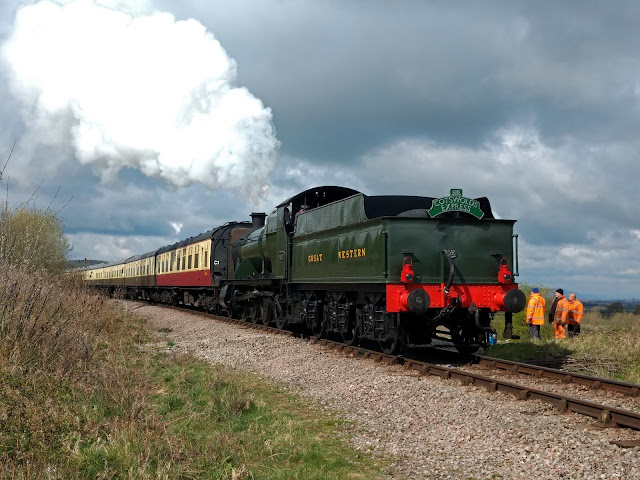 Then a pause to let 2807 by, with the first train out of CRC. Although it was clearly sunny, dark clouds were forming in the sky, for what the BBC weather said would be a 'showery' afternoon.

A third fishplate investigated with a possible fracture was clearly identified as such. It was a 'new-to-new' plate, and we had that, so no problem.

Now just to grab that impact wrench and...


We did change that third fishplate, but with what is known as 'hand spanners', which was slow and tedious. But crowned with success, so that's one done. Robert replaced quite a few clips too, now for some seized bolts to cut off and replace. This was done by the Landie team in the afternoon.


Lunch was a jolly affair, crowned by Paul arriving very solemnly with a cake with '70' candles on it. No, not 70 candles, that would be a firestorm and melt the cake we all lusted after. 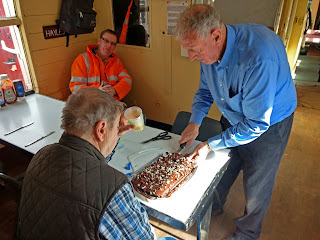 The beneficiary of this unbridled generosity by Paul was Jim, 70 years old today.

Happy Birthday, Jim! Of course we all sang the Happy Birthday song, it was quite loud with 20 or so voices in a confined space. 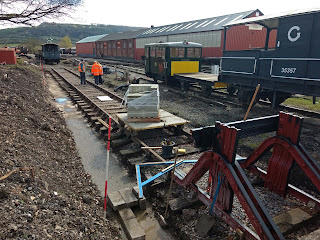 Outside, a start had been made on the Usk goods platform. We don't have planning permission for the building yet, Tewkesbury have a lot of applications to consider we learned, but we can work on the platform wall. Today we set out how it would be constructed, located the materials and brought a Permaquip trolley with blocks to the site, and measured up the height. Another group spent some time leveling the siding, as it has to match the edge of the wall. 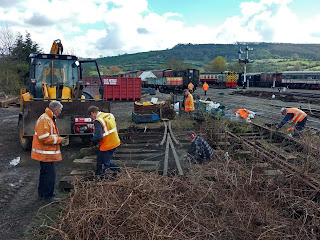 The turnout group were found busy dismantling it. At first the owner planned to remove it intact in 4 sections, then changed his mind and a start was made last week in dismantling it, which we all but completed today.

The promised lorries failed to arrive, so that will be for another day. Patience is needed here.


Most of the threads of the components were badly rusted as usual, and John here spent some time releasing three of them with a long spanner and keying hammer, until Steve pointed out to him that it was more usual and far simpler to just take the screws out of the chairs and let the sleepers drop down. Ah. 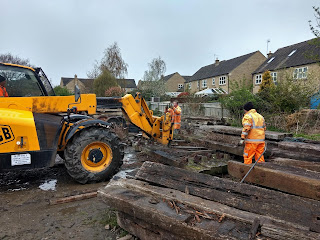 Elsewhere in the yard the timbers released from the turnout last week and this morning were being stacked on one side, we don't want the whole yard covered in bits of pointwork.

After lunch however, the weather turned very nasty indeed. There was heavy rain and sleet, and instead of the forecast 'showers' the downpour lasted for at least 2 hours solid. A number went outside to continue work but after about an hour of freezing rain they returned inside and warmed themselves on the hot teapot. 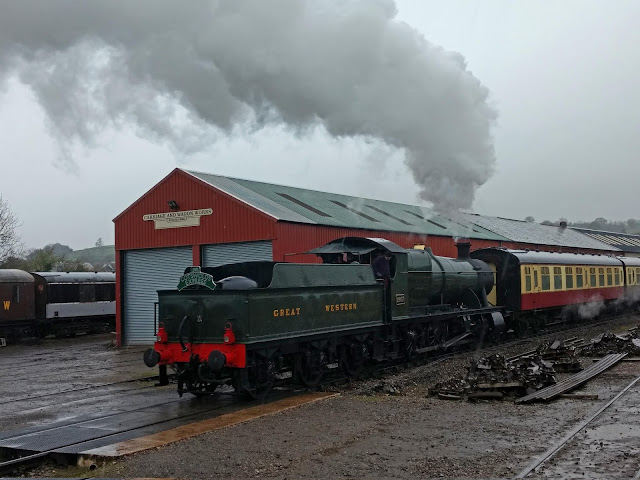 We decided to call it a day at 3pm, just as 2807 accelerated past in streaks of rain and sleet.

The day's temperature had risen to a generous 2 1/2 degrees. Whoo-hoo.


Finally, more extension pictures of the 1990s by John Lees have been posted on the 'Early GWSR' Flickr site, with more to come over the next several days. You can continue the story (over 600 pictures already) on page 6 here:

It covers work on the Greet to Gotherington stretch.


* Sad news from Broadway, home of Minnie the Mixer. Minnie died last week, after throwing an alternator, which proved fatal for her.

No flowers please, nuts and bolts or donations may be made to Friends of Broadway who cared for her in her final years. Rest In Pieces.
Posted by Jo at 18:14