Rain again. What to do?

As it happens, the 4 GWR poster boards assembled over the last few week are ready, so how about putting them up? We'll be in the dry then.

Here are the two types of GWR poster board. On the left an indoor one for the booking office, on the right an outdoor one. They both take a 'double royal' poster. 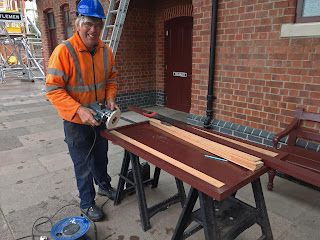 The poster boards are mounted on strips which run down the wall. These have been prepared and here Neal is cutting little gaps into the back of the boards to allow the strips to sit flush.

From the old picture you can see the strips, which rested on the plinth headers. The bottoms of the boards were just out of the way of the seatbacks. There was a poster board on every available surface, six already on the much smaller original station. Today we fitted 4. 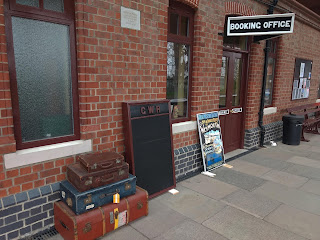 The boards and their posters were stacked up against the wall, with a makeshift table on the platform for the cutting and screwing. The posters are reproduction prints you can buy on line, and copied on to a sort of composite sheet which makes them weatherproof. They will not tear or fade. In the past of course they did that, but no matter, you just pasted on a new poster of whatever Swindon sent you! We can't do that. The weatherproof posters were sponsored by a kind supporter of the project who, as we do, enjoys the little extra details that make it fun to build a 1904 station. 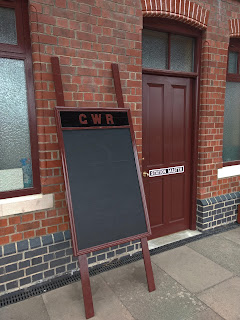 The first one is ready for fitting to the wall.

Our assembling activity was somewhat interrupted by an unusual rumble from the road and we dropped our tools and raced down the drive to see what it was. Alas it was true, we had another bridge strike, the first one since we put the crash protection beams up. It's been a while too, the beams were fitted in October 2018 and it's been nearly 6 months without a strike (normally about every 2 months).

The lorry in question was a low level flatbed artic, with a separate tractor unit loaded on top. The bridge was hit by the wind deflector of the tractor unit. 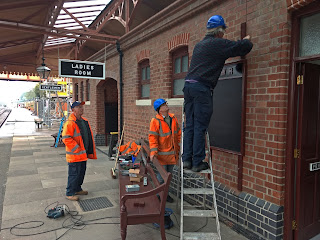 After taking pictures of the accident and informing the ops manager, we continued with the assembly of the boards and here is Neal bolting on the first one. Tony and John look on. 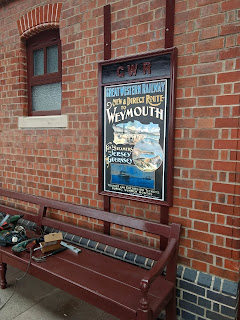 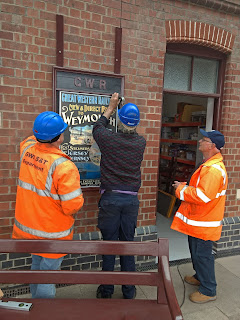 The 'piece de la resistance' were the posters themselves, which Neal recommended were attached with brass escutcheon pins. Escutcheon pins were duly purchased and here they are being hammered in.

Want to go to Weymouth by train? There's a new direct route now... 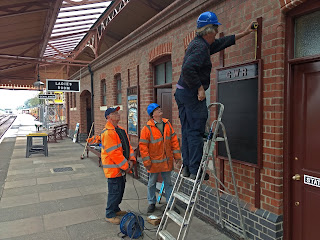 We had a think about where the 4 boards would go. The window and door layout of the 2018 station is quite different from the 1904 one, so a number of places previously used are no longer suitable, such as on the end here where the toilets now are. But the area of the store room and stationmaster's office have ideal surfaces, so here is the second board going up. 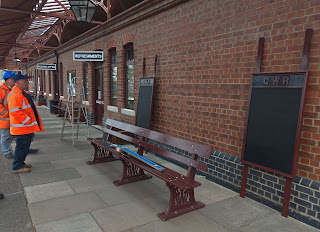 The other two.... here we are, trying for size the large blank wall at the kitchen end of the building. What would look right just here? Remembering that the wind blows in and makes the first 2 feet of the platform and part of the building wet in the rain.

The GWR also had double sized poster boards, so we reckoned one of these would fit in here, with two smaller ones left and right. There is a large variety of reproduction posters available. 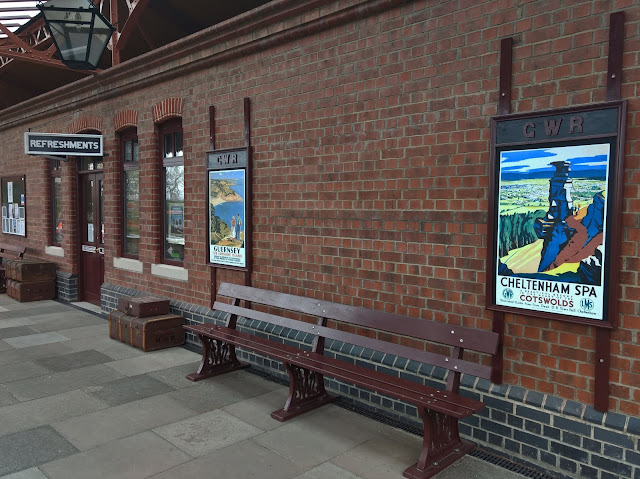 Now we have put the two single ones up, leaving space in the middle for the double one, which will be made later. First, there is a 'WAY IN' V board to make for over the entrance.

This dash of colour gives the station more atmosphere, doesn't it? 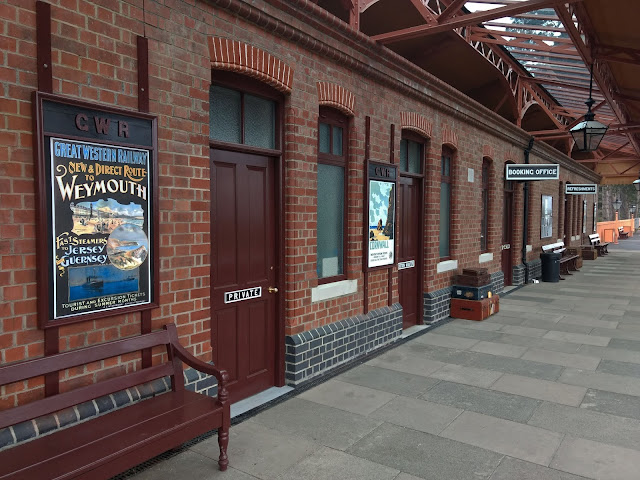 Here are the first two, more towards the middle of the building.

Again a success, we thought.

A gang of 15 today, which had much better weather than Monday and was cold and sunny. We split into two camps, PWay and construction of the platform for the Usk weighbridge hut. This will be reported on the Heritage Herald blog in future, as the build progresses.

We've had a little internal recruitment drive for track walkers, the people that walk our track in sections to check that everything is OK and note down any defects.

Here they are in a huddle. No doubt they are being given maps showing the way, any pubs along the route, and points of scientific interest. 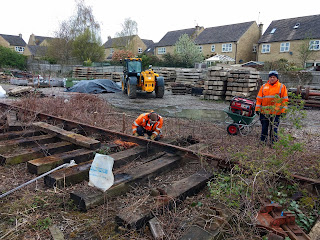 The non-track walkers spent the day helping the owner of the point and trackwork that is being taken away. Most of it was disassembled last week, with a bit left to do today before the lorry arrives.
Dave here is just grinding off a last bolt, to separate steel from timbers. 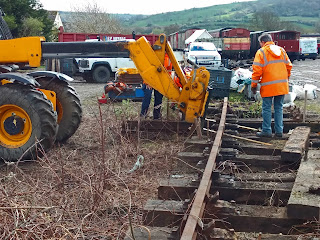 The last bit was a tad reluctant to come off the timbers; this is the first attempt.

Pointwork and timbers were then stored separately around the site as two lorries were expected, one for steel and one for timbers. 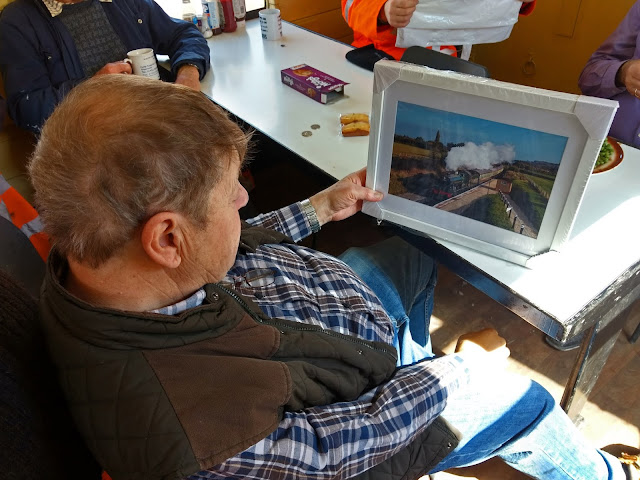 Over lunch a presentation was made to Jim. Last week you will recall was his 70th birthday, and next to the flaming cake he had we chipped in to buy him this framed picture of Hayles Abbey halt, in which Jim was closely involved as project leader for its reconstruction. And as you know, the halt was a triumph, won and award and one of the loco crew today mentioned that his train had stopped there every time today (it is only a request stop). So it's quite popular, on a sunny day. 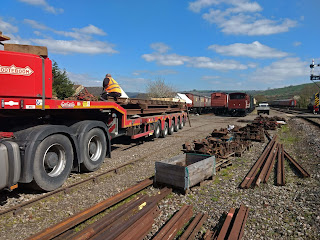 During lunch the first of the two lorries arrived and rail loading went on throughout the afternoon. 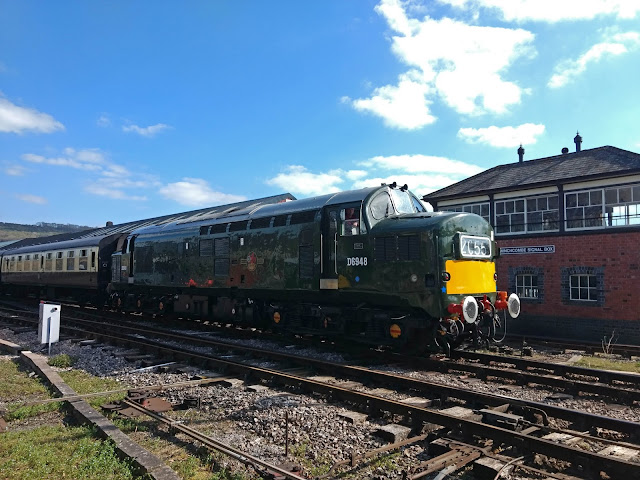 Work during the afternoon was interrupted by the squeaky horn of the Growler, which trundled into Winchcombe with the last train south. It trundled in, but made a great sound going out again and under the bridge. 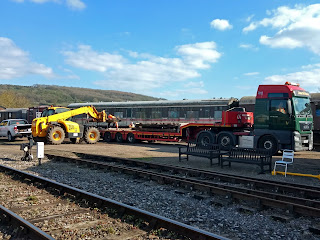 Finally at the end of the afternoon the second lorry arrived to load the timbers. They were still at it when we stopped work around four.

Check out the Heritage Herald blog then for the work on the goods platform, on which the Usk hut will sit:
https://haylesabbeyhalt.blogspot.com/2019/04/work-starts-on-usk-hut-project.html