Whoops ! We missed a post on Saturday. This was due to a 3 day mini break to Scotland, of which more later.

First, back to the matters in hand on the railway.

We're waiting for the scaffolders to arrive, so that we can make a start on the roof of the steps, and other woodwork related to them. 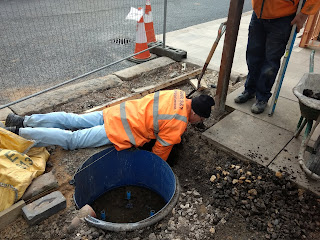 In the meantime we are putting up the spearhead fence and cast iron posts along the forecourt, to complete our frontage up to the B&B.

The spearhead panels have long feet (in a slight departure from the original) and here John is digging out a hole for one of these. 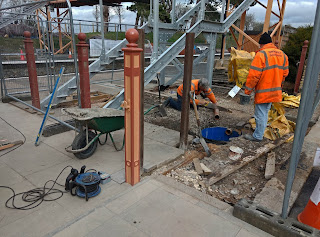 The feet will stand in plastic tubes in this area, and in the picture Neal is cutting one to length, before settling it down into the hole John dug. 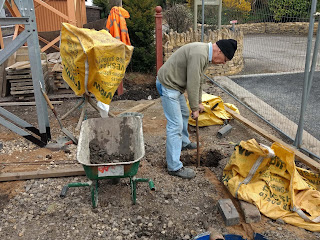 Three holes were required. The first inches below ground are difficult to dig through, as you have to break through the slagstone blinding the GWR laid in to keep the underground clay at bay.

Once through the slagstone you are into the solid blue clay, and here Neal's auger comes in jolly useful.

A smaller hole needed here? Neal has a smaller auger. Of course. 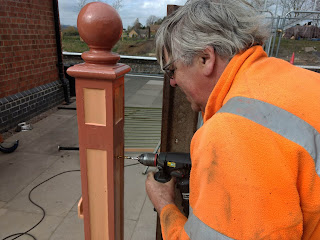 At the gate end Neal drilled the holes for the bolts that will hold the first fence panel in place.

These gate posts, cast from a pattern specially made for us, a very useful. They are multifunctional, and can be used to attach either gates or spearhead fencing panels. Or even act as a newel post, which is what we are doing at the bottom of the steps. 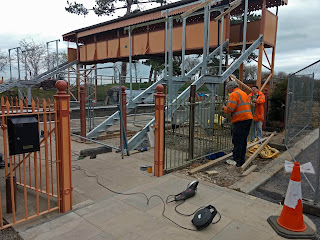 Just before lunch we had enough holes dug for a test fitting.

What do you think of it so far? 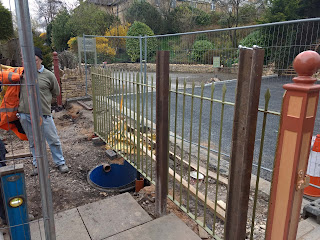 Two panels were placed with their feet in the two holes dug. They were removed again later, so that we could clean and paint the two rails for the cast iron bridge notice.

The blue tube in the middle is for the canopy end post.

Monday is a non-running day. Until a train comes in, here for a fire and drive experience. Nice to have the platform free of people, but it won't be long. The season has got going again, and so far, so good.

Yes, Hi There! Nice to see you too. 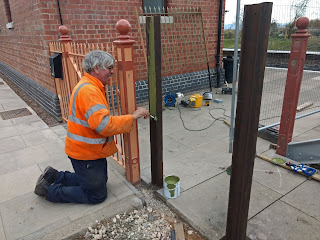 Having cleaned the posts with a wire brush, we put on a protective coat in the afternoon. 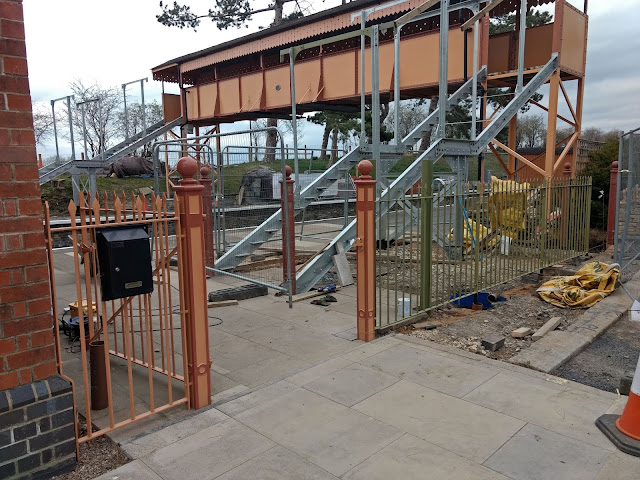 There, the first 3 panels are in. They do round the frontage off beautifully. Now Peter of the Broadway gang will measure up the actual distance remaining, and will make the last two panels to fit. These are both one-offs, including the return to the left which ends in the last post by the tower for the bridge. One day it might go further, along the back of the platform.


Today Wednesday was our last chance to do any fishplate greasing on a non-running day with the Wednesday gang. As we have a lot of kit to get out we asked for the train to be brought out, which saves a lot of loading and unloading with the Landies. As a result, we did exceptionally well today, three quarters of a mile! 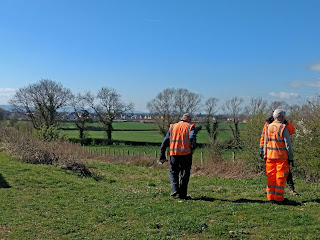 It's a lovely view of the Cotswolds; but turn to the left and the advancing housing estates are just 2 fields away.

We commented on that last week, and here is a picture.

We had a team of 12, and allowed ourselves a little luxury by splitting that into two groups of 10 (fishplate greasing) and 2 (correction of minor defects along the loop).

The track walkers produce an excellent report which details precisely where even the tiniest fault can be found. One of these was a report of a fishplate fitted upside down (years ago, it must be said) and this was located at the north end of the loop. We loaded the heavy stuff into a wheelbarrow and pushed it as far as we could, but the nearer we got to the target location, the harder it got to push, so eventually Dave picked up the heavy Animal and just lugged it to the site.


Arrived on site, we looked and we looked but couldn't find the upside down fishplate, which was spray painted to help us.

Eventually we made a phone call, to discover that the location was the other north end.

Well, who knew. With that vital piece of information we found the plate soon enough, and put it the right way round without problems. 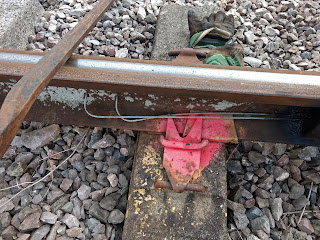 Next, several broken plastics on the list. How long do these things last, we wondered? They were all replaced with new without problems, even this one, worth a photograph because the issue is one we have never seen before.

The plastic 'biscuit' isn't broken at all, but hanging half off to one side. How on earth did it get like that? 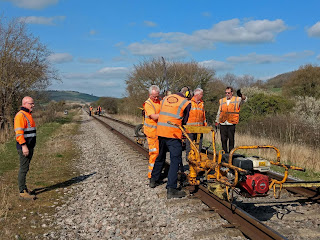 After lunch we united and became a team of 12, except that two gang members dropped off, so the greasing team stayed at a net 10 volunteers.

We started by the PWay train stabled in the far distance, can you see it? 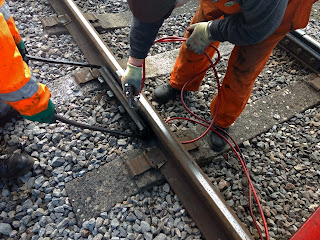 We had the three vehicles out, a TB2 to undo, the trolley with the compressor and the greasing unit, and the second TB2 to do the bolts up again. Three men on each, and one to 'prep' the bolts with a large spanner if they were too stiff. 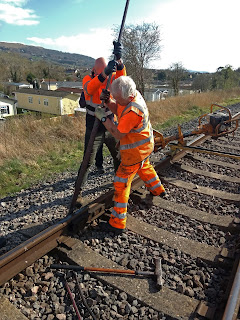 Some of the nuts were really very hard to undo. Too much for the power of the petrol TB2, and too much for the spanner too it seemed, as a lengthening of the leverage was required by means of a bar stuck in the end to get this one off. Plus two men to pull on it, Jules and Paul.

But, mission accomplished, and we got this one loose too.


We were a bit under time pressure, but were very keen to reach the outskirts of Bishops Cleeve, where a section of CWR started. How good it would be if we could tick that off. Then, beyond the CWR through the former station, it is just a short hop to CRC to complete the entire railway. 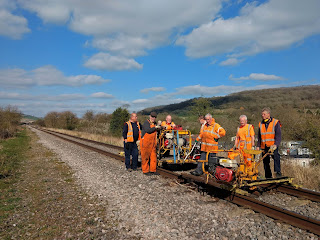 With just half an hour to go before our train was due to be picked up again, we finally reached the breather.

We had just done three quarters of a mile, from the PWay train parked way back at the beginning of this long straight. We felt good. 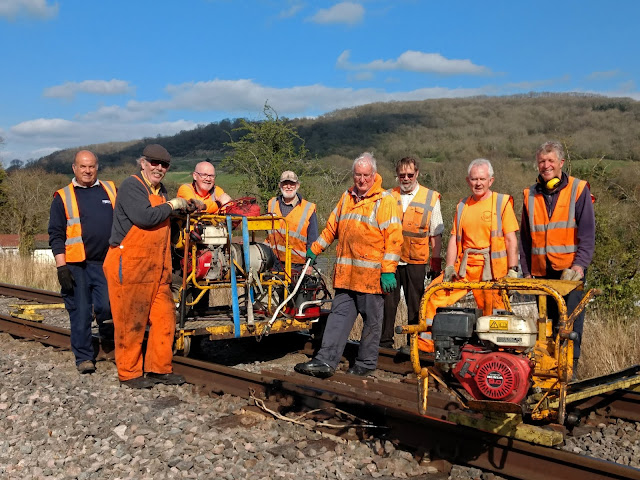 Time for a 'selfie' of the proud gang. Here we are then:


Martin, John R, Jules, John B, Robert, Dave D, Paul and Dave P.
Alan and Mike could only do half a day, so didn't make the snap. 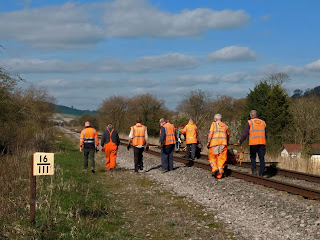 All that remained then was the long trudge back to the train, three quarters of a mile. This stuff certainly keeps you fit.

If you love trains and good food,you might enjoy this: a three day mini break by private train to Fort William and back. It's called The Statesman.

The luxury train is made up out of 7 Mk2s in Pullman style, a Mk1 full kitchen and top-tail haulage by two class 47s. You eat and drink all the way there, and all the way back. 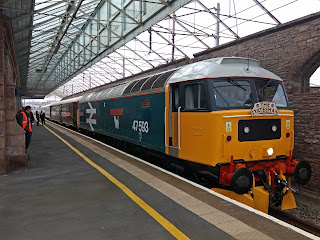 The train is based at Crewe, but started out from Milton Keynes.

To keep the carriages fully watered up there are occasional water replenishment stops, such as this one at Penrith. This is an opportunity for a quick visit to the front to see which loco is pulling the train.

Here it's 47 593, with the beautiful name of GALLOWAY PRINCESS. Despite the 14 hour journey, she remained immaculate throughout. 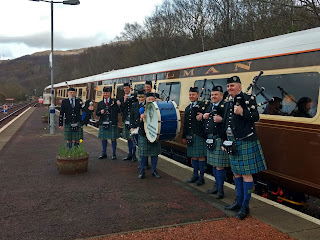 In Scotland you are welcomed by a pipe band, here at the start of the West Highland Line. 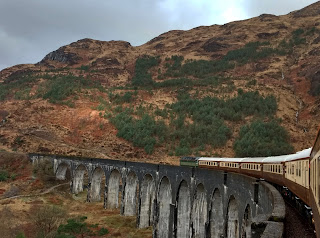 On arrival at Fort William, the train reverses and hence the leading loco is the other class 47, D1944, CRAFTSMAN.

The scene is Glenfinnan viaduct, on the way to Mallaig. 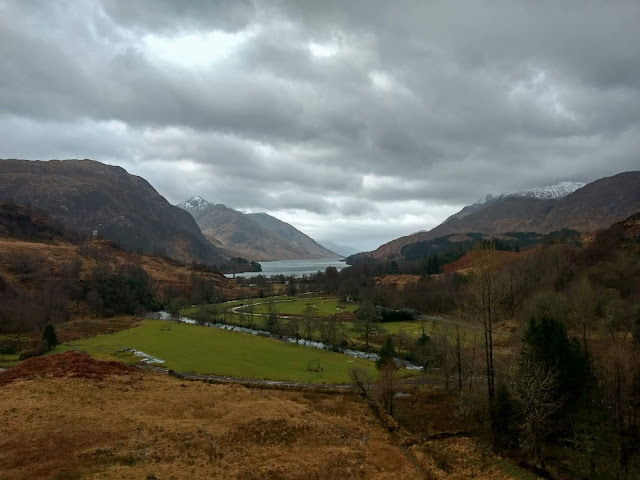 From the viaduct you get a moody view of Loch Shiel, with the Jacobite Glenfinnan monument just visible on the shore on the left. 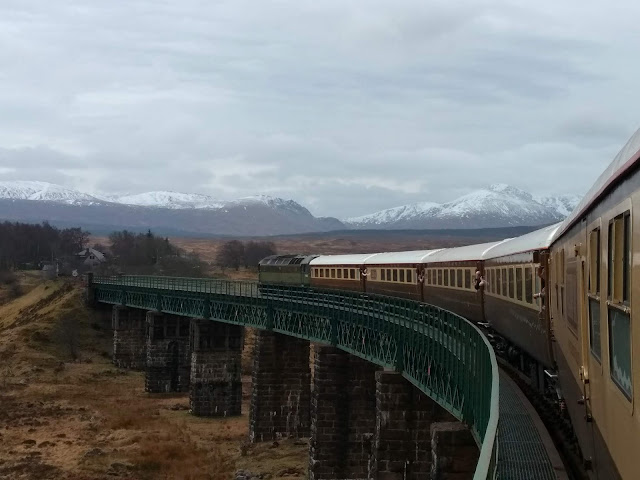 The return journey is also in the care of D1944 CRAFTSMAN. The train paused briefly on this stunning curved viaduct leading to Rannoch station, with the snow covered Highlands in the background. It's only March, after all. 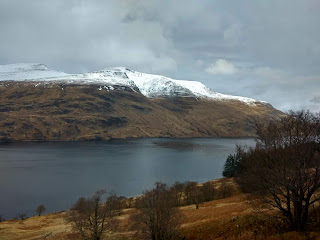 Loch Treig allures with its black, peat laden water, just under the distinct snow line a short walk up the mountain. 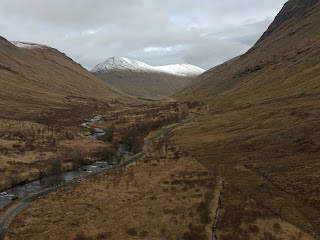 Elsewhere there is just emptiness and wild nature.

Thanks to the train, you get a brief view of this secret landscape, here off the horseshoe viaduct. 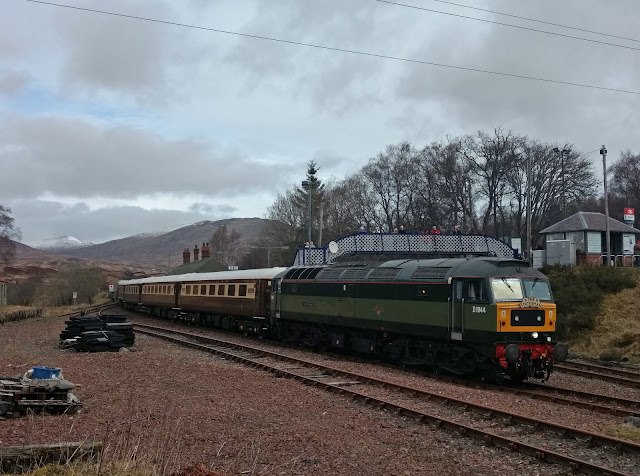 A final glimpse of The Statesman, here at the lonely outpost of Rannoch. There's a half hour to photograph your own train, while it waits for a regular service to cross.

Now it's back to earth with a bump, and fishplate greasing today. But it's good to be among friends again on the gang. Custard doughnuts today too, a real treat.