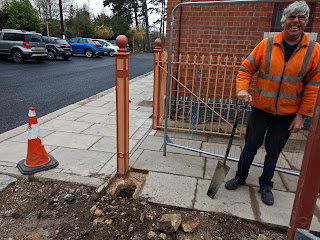 We were hoping to see evidence of the scaffolding company for our next stage, but there was no news of the promised quote.

To fill the time in usefully, we decided to plant the two rail posts brought up a few weeks ago.

We consulted this old photograph by John Diston for the location: 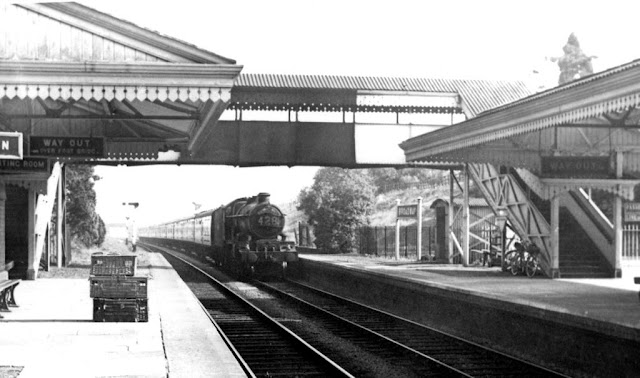 It's the only photograph we know that shows the location of the sign asking passengers to use the footbridge to cross the line. Can you see it? It's just visible way over on the right, at the bottom of the steps.

There were two versions of this sign, one requesting passengers, and the other a bit more frank, telling them that they must.

We need to find a second 'requesting' sign for P2, so if you know of one, do let us know. 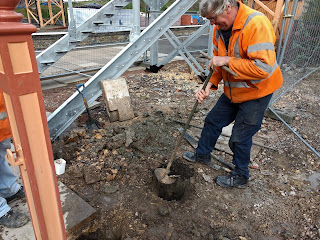 Having cut the two rails to length, we set about digging the holes. This is not an easy job with a spade or even a narrow 'grafter'.

Neal always has the right tool to hand, in this case an auger, which worked like a dream in the original clay below. Brilliant! 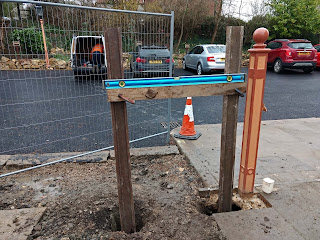 A while later we were ready to test fit the posts, and see what the level was like. 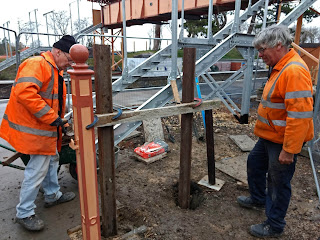 After some huffing and puffing (the posts may be shorter than a normal rail length, but they are still heavy all the same) we were ready to pour in concrete to fix them in the holes. 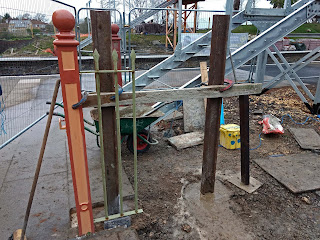 And there they are, waiting for the concrete to go off. Next time we will drill the holes for the cast iron sign itself.

In the picture we have added a short length of spearhead fencing, to give you an idea of how it will look when finished. 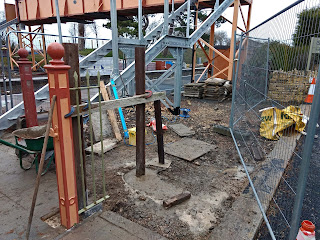 In fact there are a handful of panels of spearhead fencing still to go in here, which will link the gate post to the neighbour's wall. At the wall end there will be a return, and the last two cast iron posts we still have.


As soon as the scaffolding is up, we can make a start on the roof of the two steps.


Saturday on the gang


We decided to clean the sleepers of excess ballast on the relay at Toddington on this, the first day of services this season.

As Pete considers his options on the wheelbarrow, the gang answer a question from the DMU crew. 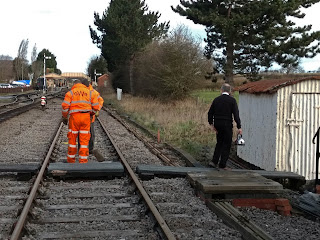 We were going to inform the signalman of our presence on the track, but not until he came back from an urgent mission. 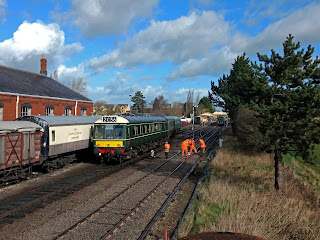 The DMU was out today together with Foremarke Hall on the 8 coach set, and here you see the track gang start work by the loop turnout, as the DMU is fuelled up alongside. In the background is the first train of the day waiting to leave Toddington to pick up the crowds (we hope) from CRC. 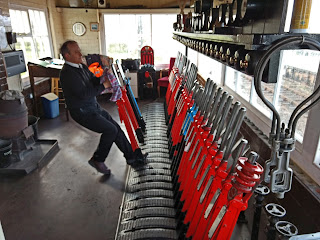 The signalman was kind enough to let us watch, as he pulled the signals off for the first train.

From the effort expended one might presume the signal stood 2 miles away at Winchcombe!

The new windows are in, and the box immediately feels warmer and more comfortable, as the wind no longer whistles through them. 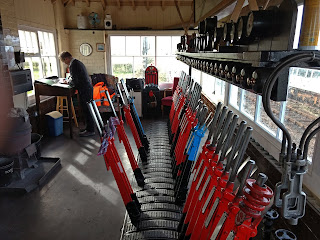 Then a quick trip over to the train register, as the kettle hisses away in the distance. 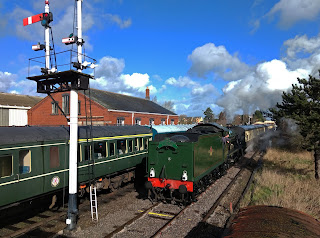 Foremarke Hall then chugged past cautiously, ready to pick up the token for Winchcombe. 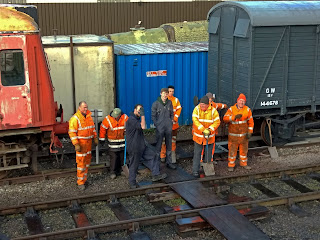 Below, the track gang stood aside to let the train pass, leering at yours truly.

A member of the loco department wished to remain anonymous though. 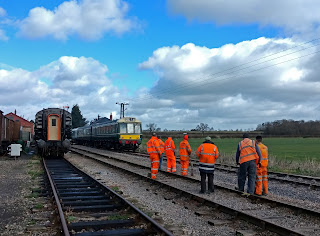 We slowly worked our way along the 500yd stretch of relaid track, until the DMU in turn set off for CRC, having already been to Broadway. It had quite a few passengers in it, we noted. This is the first day the new car park is open, maybe that played a part?

The Broadway cafe saw its first day of operation and made a busy start, although many early patrons of it, we heard, were in there to escape the ice cold wind blowing down the platform as they waited for their train. We hope they all bought a cup of coffee. 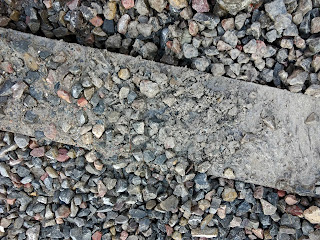 Some areas of the ballast we pushed off the sleepers contained quite a lot of fines, we noticed.

We threw that into the cess, as it retains water. 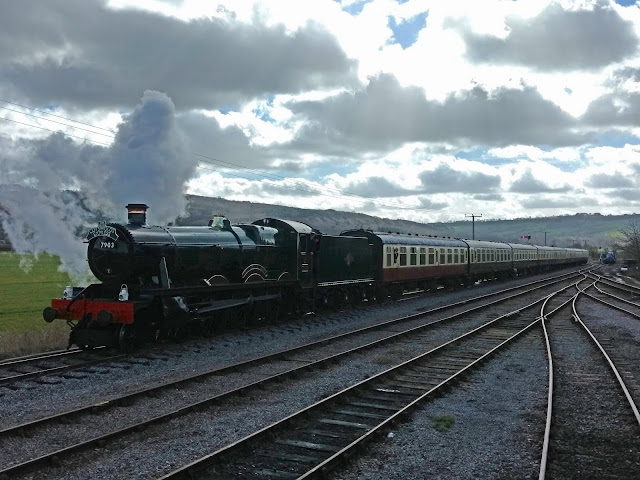 The steamer then returned from CRC with the first haul of passengers waiting there. We were pleased to see that it was very well filled, a good start to our new year.

Note the first carriage is in carmine and cream. This is an SK on loan from the NYMR. 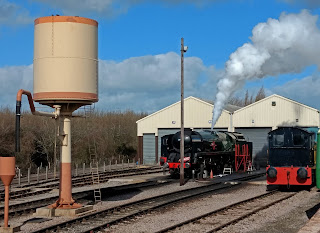 A roar behind us came from P&O being readied for some test runs to Winchcombe (as we discovered). 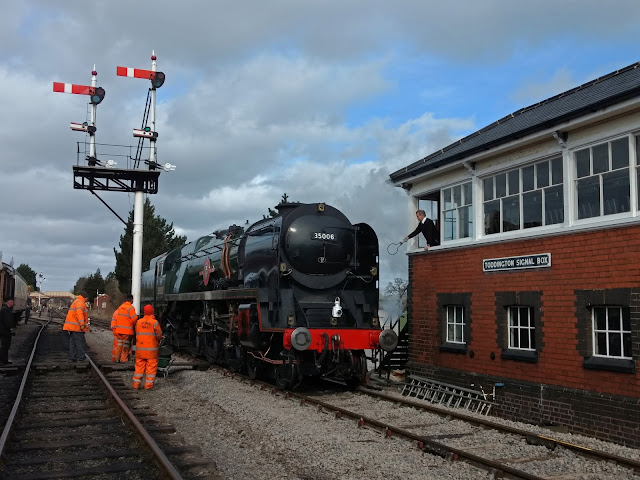 Shortly afterwards the big Pacific was taken out on the main line for a canter, and is here seen picking up the token for the section to Winchcombe. 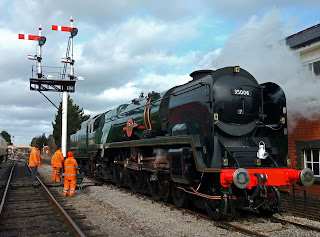 After that the regulator was cracked open a little more, until the reins were freed up at the end of the station limits. 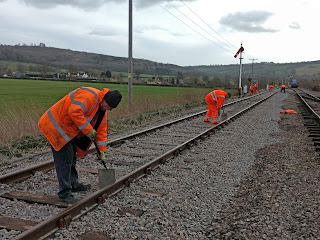 After a break for lunch back in the mess coach at Winchcombe, where Jim and Paul awaited us with tea and some doughnuts scrounged from an unsuspecting neighbour, we resumed the ballast clearance.

We settled down to each of us concentrating on a certain part of each sleeper - the 4 foot, the outside, LH chair or RH chair. That made it easier than having to turn backwards and forwards and fiddle with all of each sleeper each time. 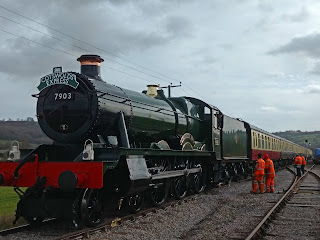 Here's Foremarke Hall again with the last train to Broadway already. By now we are at the new mainline turnout we put in, so not much more shovelling to do.

Mid afternoon we started to feel a bit weary, it was hard on the back.

Steve and Pete have decided that a little rest is due. And why not, it's been a pretty constant job, bent over and shovelling all day.


At the end of the day we treated ourselves to a little social outing. 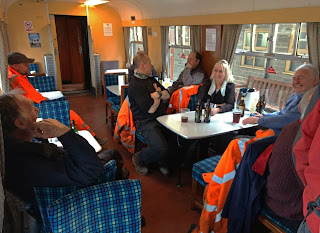 A beer on the cushions to CRC and back. Just making sure our track is still in good condition after the winter shut down, see?