Only 10 volunteers today, no doubt due to conflicting duties with our very successful food fight - er, fair. Indeed, one of the PWay gang is actually the mastermind behind it! We coped, but it's more fun when there are lots of you. 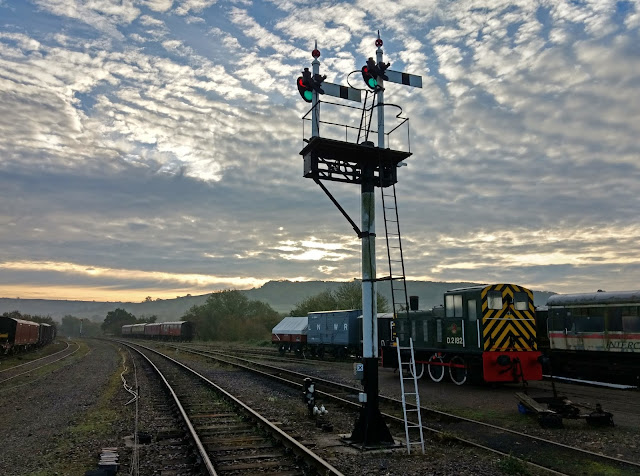 Lots of people were already about, and our food fight - er, fair - is now such an event that it is spread out over 2 sites, with a DMU shuttle in between. It was well used too. We had a heavy 3 train timetable today to cater for the demand.

As we arrived, two very kind souls had already made a start on renovating the newly revealed stop block at the end of the siding we shifted last week. 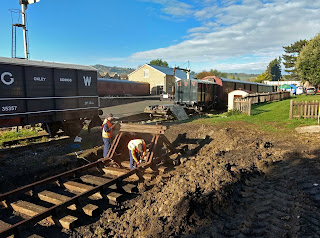 Here they are buffing and polishing the rusty old rails.

Skipping to the end, here is what they looked like at the end of the day: 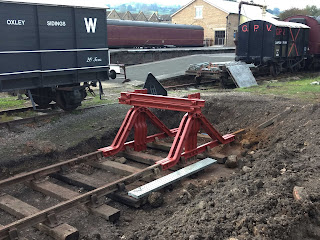 An amazing conversion. Two visitors wanted to know if it was a new one. Well, almost new. It turns out that the mystery stop block polishers were from a friendly neighbouring department. Thanks, guys! 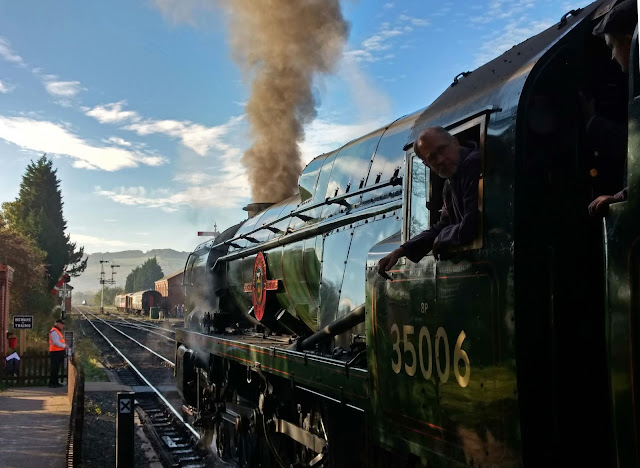 At Toddington the big guns were out. Eight coaches and a pacific express engine on a former GWR main line. What more could you ask for? 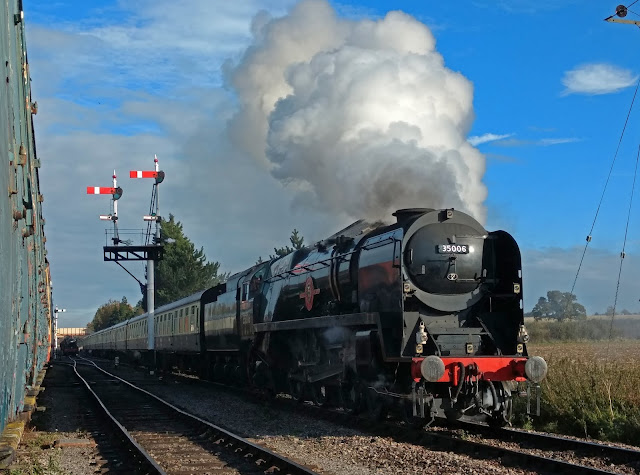 After collecting the token for the section to Winchcombe, 35006 P&O allowed itself a little crack on the regulator and on this crisp sunny morning it slowly accelerated away from Toddington box. 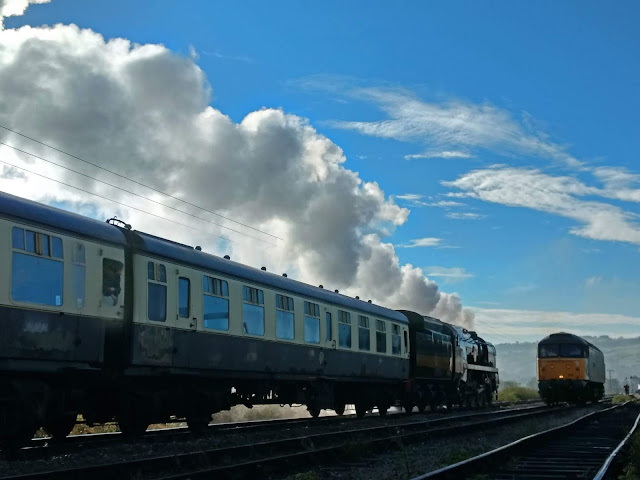 As the 8 coach express accelerated away, a class 47 diesel rumbled into the station, ready to take the next 8 coach train out. It's all go here.

Rather humbled by these big machines, we packed our 'animal', sleeper drill, jacks and shovels into the two Landies and set off for the Toddington south turnouts, where we were to finish off the timber replacement started last week. With yet another steam loco girding up its loins in the distance, Bert got the big disk cutter out and cut off the bolts holding down the rotten timber under the switches of this turnout. 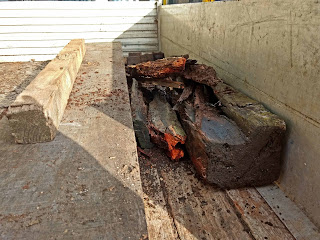 We pulled out the old timber. As the timbers were tightly interlaced at this point, we split it into two halves, which we pulled out in turn through a small gap.

The remains of the old timber, a softwood one, can be seen on the back of the new Landie next to the new one on the left. It's compost now. 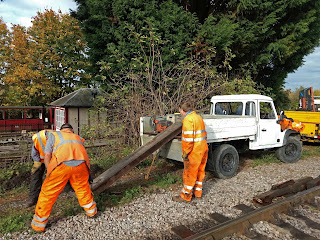 The new timber was then drawn off the Landie.

Note that Steve on the right is not getting involved. Last week Steve was on the nips at the pulling end, and when the other end of the timber hit the ground with a heavy thud the shock went right up his arm, and Steve was seen hopping about and saying things we can't report on this nice blog. 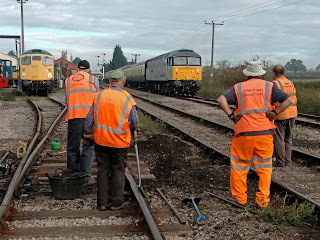 A couple of faint toots (why don't the owners of the class 47 repair their air horn, the feeble sound of it does not strike fear into the hearts of people in its way as it should) told us a diesel hauled train was coming, so we gave it a wave and stood to one side as it rumbled by.

The new timber was pulled in and bolted down. That left us with three piles of garden quality dirt. We decided to shift these to one side, and replace them with nice new ballast.


Not seen on the photographs was Alan, who brought the Telehandler up from Winchcombe with a bucket load of ballast, and who shovelled the whole load out (almost) by himself into the buckets you can see here being carried across the tracks. 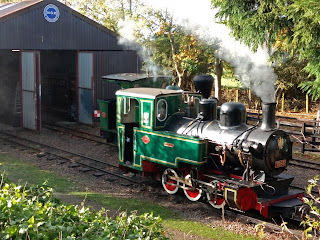 Behind us and down below there were various hisses and toots as the NG gang prepared themselves for a busy day. 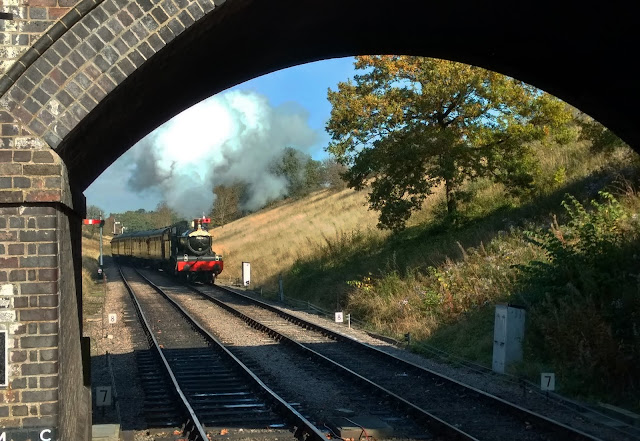 Further up by the station we had the privelege of watching a down Cornishman come in to Toddington, hauled by Dinmore Manor (OK, not a castle, but you could almost believe it).

The GWSR is a great railway, because on a special day like today it can be really busy, and at Toddington, if conditions are right, it looks like double track too.

At the end of the day - a short one, but we had completed the timber replacement at Toddington - we took a look at the new space created by the stop block moved to one side at Winchcombe. 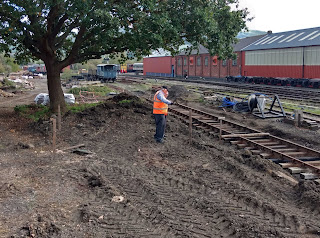 The Usk hut is planned to go in the top corner on the LH of this picture, but some people pleaded for it to be nearer the platform, in the spot delineated by the 4 stakes.

Work has continued here apace, and the contractor should have finished at the end of this week. 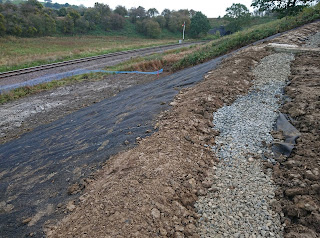 The embankment slope has been waterproofed to stop the lubrication of the clay.

Along the top edge the ditch has been reinstated, but rather than an open ditch as before the contractor has opted for a perforated pipe at the bottom of the ditch, covered by ballast.

The junction with the new ditch joining, which caused the failure of the embankment side, can be seen at the top. This is the view the other way, in this case looking south. 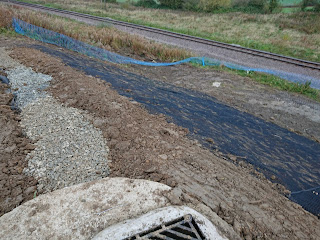 A close up of the drain cover where the two ditches meet. The rainwater is taken down to the track drain from here, and then away to the lowest point on the other side of the track, where a small stream emerges. The site was on the edge of a field and at the end of the works the temporary access road is being landscaped by the contractor. 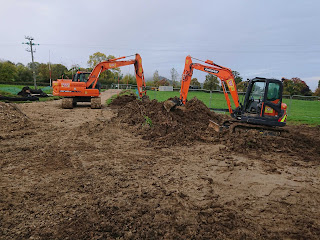 The other end of the access road, which emerges next to the Roayal Oak. Both the farmer and the Royal Oak have been very helpful in allowing us to repair the slip across their land.

The fabrication of the metal parts for the new footbridge steps is now pretty much complete at Toddington.

Prior to sending the half assembled parts away to be zinc plated, some of the items will be rivetted together at Toddington. This will save time at Broadway. 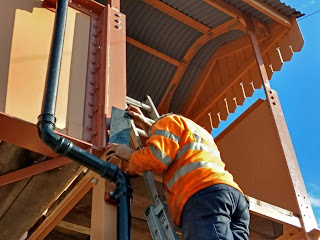 Neal was at Broadway on Friday to measure up for the gussets that will be attached to the ends of the stringer. The holes in those plates need to match the existing 6 holes in the centre span exactly. Neal took one of the 4 gusset plates in question with him, fettled it so that it fitted around the welds up there, and then drilled it. 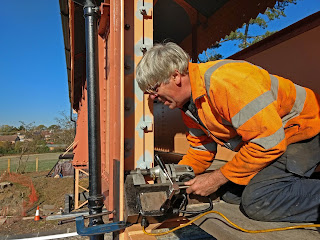 Drilling the 6 holes was tricky due to the lack of space for the mag drill, but in the end and with a bit of ingenuity he did it. 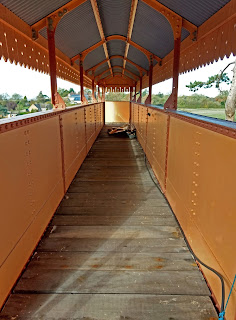 We then walked over to the other end to test the holes there.

This is the current view of the footbridge from up there. There is some rainwater penetration and it could do with a row of half height windows along the tops of the sides, as it once had at Henley in Arden. The holes along the top edge of the sides are still there. 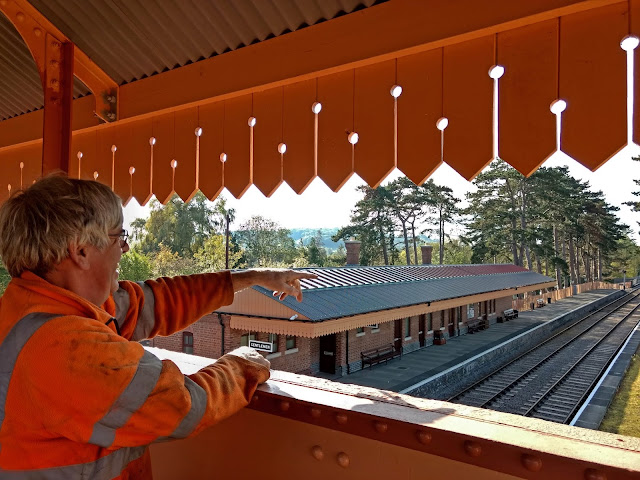 Neal explaining the layout of the station from above. On the bottom right is one of the fixing holes for the former windows, which would have protected against the prevailing southerly rain. 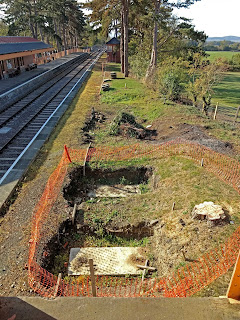 Looking down on to P2 you can see the foundations of the bottom of the footsteps, and the intermediate landing support. The hole beyond that with the brushwood in it is the site of the former waiting room.

This side also had a rivetted canopy, with a canopy overhang. Fortunately the footbridge tower on this side is in line with the corner of the building as it should be.

The fence on the right has been completely renewed by a contractor over a length of several hundred yards, another area of expense that is rarely in the public eye. 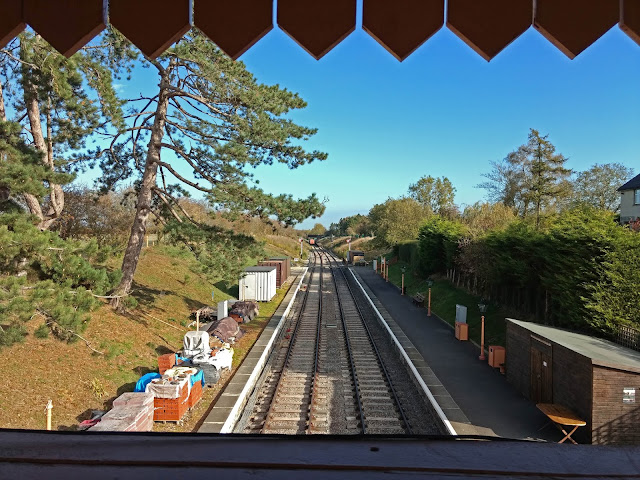 A view from the footbridge to the north today. At ground level the new S&T point rodding and signal cable runs were very evident. 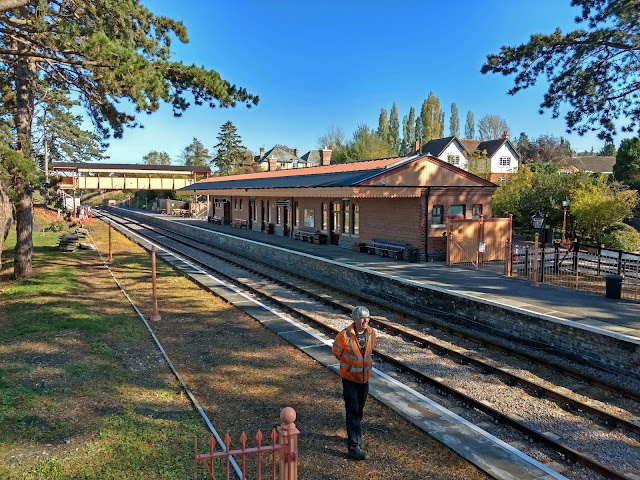 A view of our station building in the sun, and with its new modesty screen at the south end. Platform 2 looks much better, now that the concrete cable troughing has been removed. Spearhead fencing, tarmac and lamp tops are still required on this side, but that's for another budget.

The main car park works are almost complete now, with the exception of the entrances. These are to be built by a different contractor for the council. The picture above shows the middle section. There is a fenced off footpath down one side, and the surface has been finished off with permeable slabs to allow rainwater to soak away, instead of adding to the flooding woes of Broadway Brook. 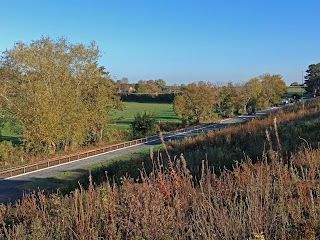 Looking right a bit, the parking area in the centre (above picture) makes way for a grassed area of some length. The purpose of this grassed area, which must surely cost quite few parking places, is unknown to your blogger. 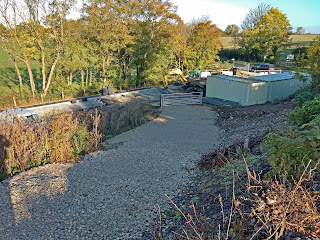 This is the railway's renewed track access road. It's got a nice new gate at the bottom, and a bit of a new surface too. At the moment we're having to access our trackbed as far away as Little Buckland in order to drive a vehicle and supplies to this spot, so to recover our access road is a big relief. It should be available in the new year. This overview of the whole car park shows how it's just about finished, leaving the bell mouth for someone else still to do. 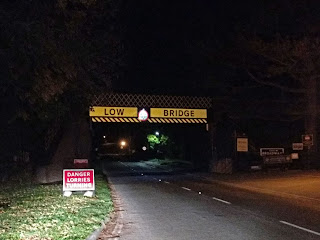 Broadway by night - returning home after a late night heritage group meeting, we found the bridge all lit up. In fact it's not separate lighting, but a very reflective material that reacts well to a car's headlight. Certainly at night, you can't really miss this bridge (if you know what we mean).

More Early GWSR pictures have been posted on the Flickr site. You can go straight to the current page with this link:

We're now up to 466 photographs, and the southern end of Greet tunnel. More to come in due course.
Posted by Jo at 17:03