A little known but interesting piece of repair work we are undertaking is to this cutting side just south of the Greet tunnel mouth. 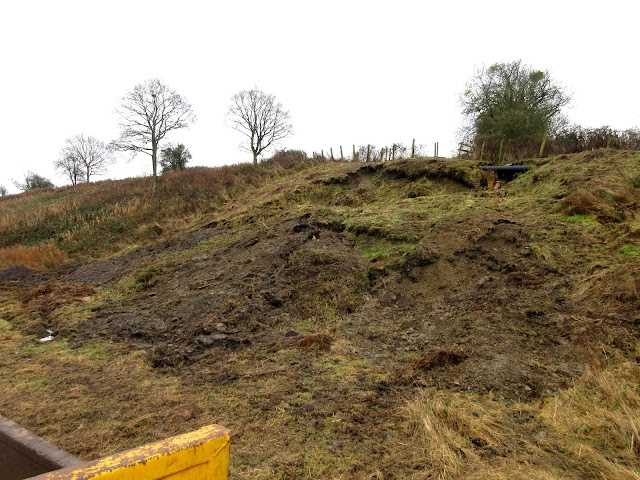 A slip began to develop here a few years back, resulting in this big bulge that you can see. This picture was taken in the spring of 2017.

Our cuttings often have a drainage ditch running along the top in parallel. A new ditch, dug post construction of the railway, met ours at right angles and at the point where the two ditches met the side was eroded away and the water began to run down the cutting side. This lubricated the clay and it began to slip.

Work has now started to repair the slip, and its cause. 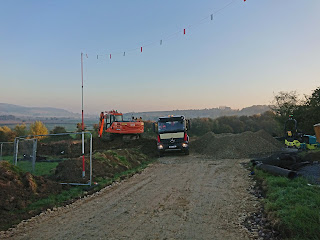 A temporary access road was laid across the field adjacent to the Royal Oak PH, and this can be seen in the picture above. 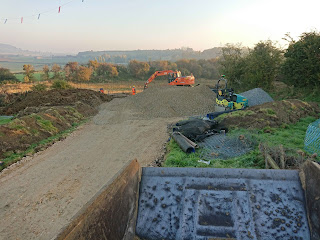 This access road allowed construction machinery and  material to be brought to the otherwise inaccessible site. 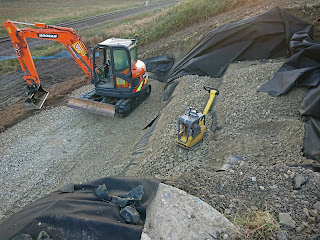 The slipping clay cutting side is being repaired with steps of better draining material, in a similar fashion to an embankment slip repaired at Laverton. 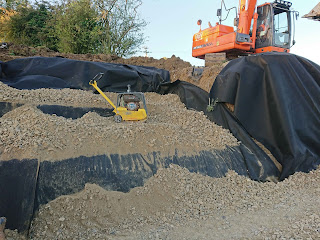 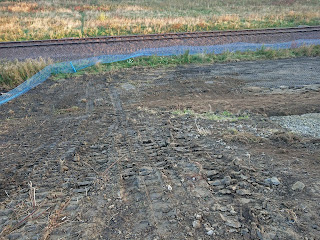 Each step is consolidated and waterproofed.


This is a view from the top, showing our line passing by beneath. 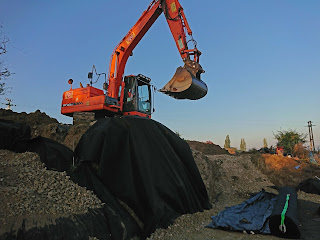 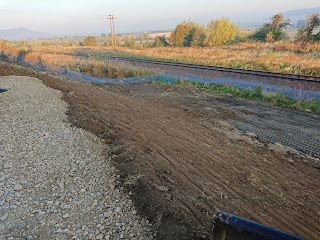 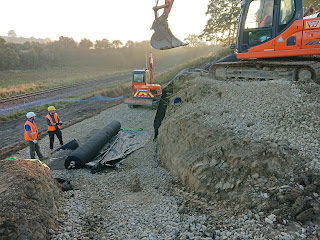 These photographs, kindly supplied by PWay gang member Jonathan, show how the cutting side is being rebuilt.

These scenes show how the railway is taking firm measures to protect our infrastructure, often at considerable expense.

Good progress is being made with the Broadway footbridge steps, sometimes as often as 4 days a week, with a small team of 2 or 3. 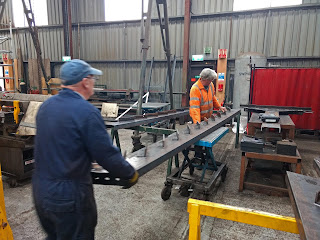 The stringers all have their cleats now of course, but nonetheless extra work is still required on them. We have the use of two jackable trolleys, which have been extremely useful as you can see. They are just right for transporting a stringer around the little area of the shed we are allowed to use.

This one needs some extra holes drilled into it, so off it goes to the drilling area. 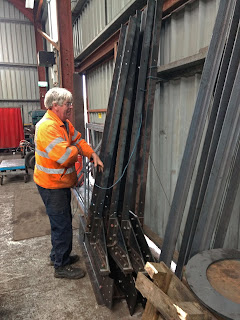 The fourth and last intermediate landing support has just been completed.

There are an awful lot of rivet holes at the top end of it, but at last they are all done.

On Friday we trolleyed the final one over to the area where we store the finished bits, and in the picture you can see Neal securing the collection with rope so that it can't fall over. 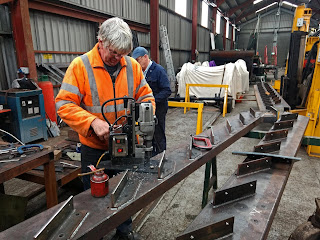 The stringer in the top picture is having its final holes drilled here by Neal.

These holes serve to attach the uprights for the roof. The stringer of course is angled but he upright is vertical, so there is a lot of calculating and checking with a protractor to make sure the roof support goes straight up when the stringer is in. 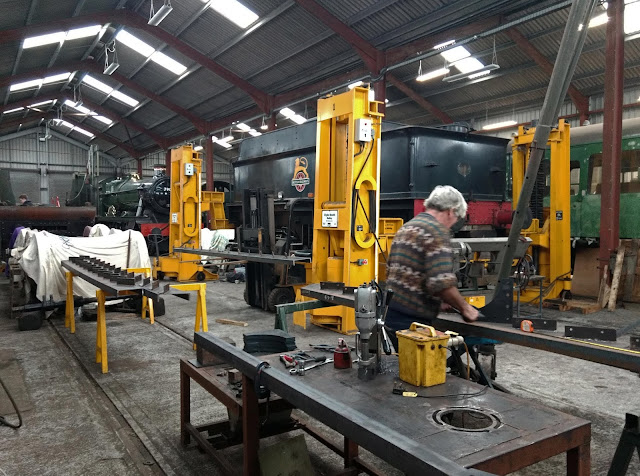 A little overview of our work area in the Toddington loco shed. Today work was being done on the Dinmore Manor locos, and we had a very interesting conversation about the torn cylinder block of 3850 which is in the process of being replaced by a brand new casting.

3850 almost certainly had a very rough shunt at its front end during its lifetime. This led to a front buffer beam out of true and stresses in the cylinder block which eventually turned to cracks. The good news is that the experience exists in house to correct all this. 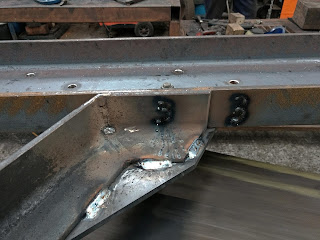 Back to the footsteps (there is a heck of a lot of cutting, drilling and welding, hence the blog thread drift...) and here is the base of one of those uprights attached to the angled stringer. These parts will come apart again for galvanising and transport, so we have marked them with a part number to make final assembly easier. 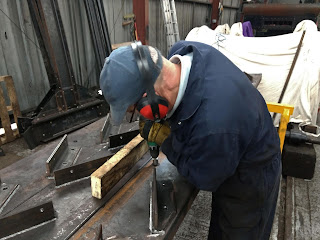 In order to avoid any undue stresses on the final rivets, we are also reaming out the rims of the rivet holes, which John here is in the process of doing. 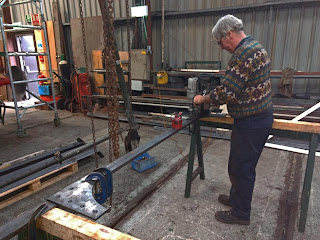 Near the end of the day. Neal switched to the next job which was to attach gusset plates to the angles which will form the corrugated iron roof supports.

This is almost the last job on the fabrication side.

We reckon there is about another two days fabrication left to do here, then the parts are ready to be sent away for galvanising. Such is progress. 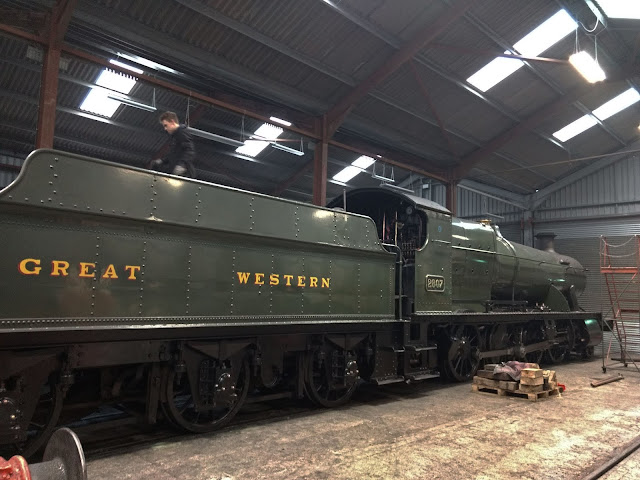 Just a little atmospheric shot of 2807 in the gloom, with as a soundtrack the storm we had banging and rattling the shed doors. That was a bit unsettling...

In the tender a volunteer is shovelling the coal up to the fall plate. 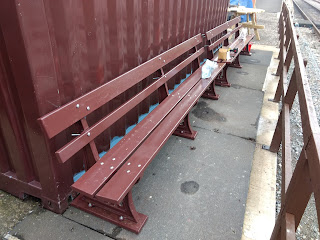 The first two of the 4 extra triple benches were fitted with SS bolts and fully assembled earlier in the week.

They are now ready to go on the platforms, although as it happens we are coming to the end of the running season and the demand for extra sitting space is much less now. The Broadway opening passenger boost is also calming down.

The extra benches will come in useful in the 2019 season though. Two more will be built; we are currently waiting for the supplier of the 6 extra early style scripted bench ends. The woodwork is already there, cut to size and painted. 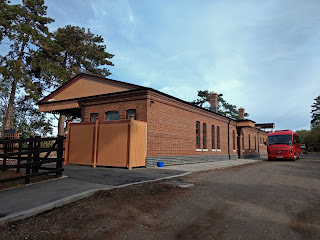 A short section on the end was recently fabricated and fitted by the Broadway gang, in this picture not yet fully painted. The posts also need to be painted in dark stone, being supporting elements - infill elements were always in light stone.

A proposal has been sent in to change the white sockets and switches in the booking office and cafe to something more period in style. 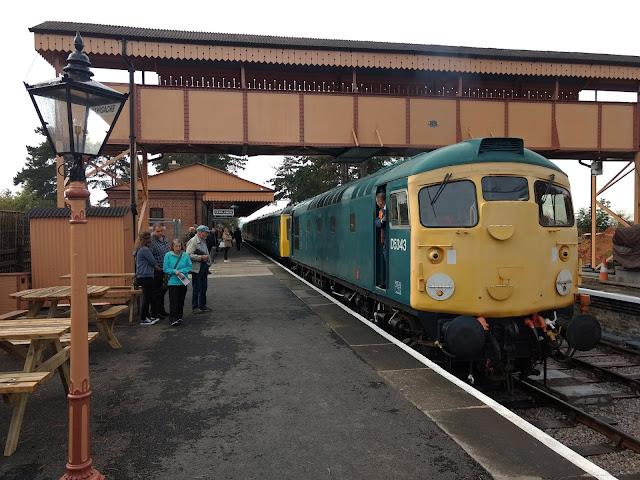 During the diesel gala Broadway was visited by D6343, towing a 'failed' DMU.