While walking through Winchcombe yard today, your blogger was enthusiastically congratulated on the blog item about the Greet cutting slip.

That item was prepared in draft yesterday evening, leaving a blank space at the beginning for Saturdays' PWay adventures. In draft, mind you.

At 19.15 it was published nonetheless it seems. Now 19.15 coincided with a call for 'dinner' from Mrs. Blogger round the corner - could there be a connection? The 'Save' and 'Publish ' buttons on Blogger are next to each other. No wonder we went off at half cock.

So here is part 2, all of it intended for today. 376 of you saw an early form of today's report yesterday, with all its typos. No one seemed to notice though. 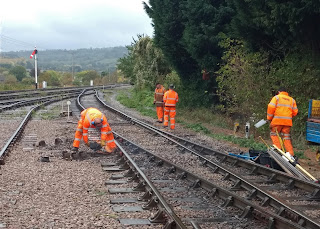 Moving swiftly on then, a record number of volunteers coincided with the return of Jim and Paul in the mess coach today. Could there be a connection? It was good to see them back in action.

The weather forecast being somewhat dire, we kitted up with all the weather gear and sweaters, as you can see in the picture above. We returned to the turnout at the Toddington yard throat, damaged by the derailment of a tender with somewhat wobbly wheels. Last week we dug out the timbers involved, this week we actually replaced them.

In the picture David is cutting off the awkward GWR throughbolts, which cannot be undone by human hand. A motor powered cutting disk provided the answer. 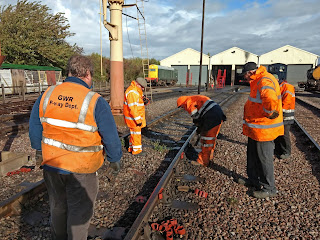 A second team armed with a supply of Panlock clips checked out the loco roads for loose Mills clips, as several seemed to be missing or held in place with rotten oak wedges, a very old practice even when these were laid, back in the 1980s. 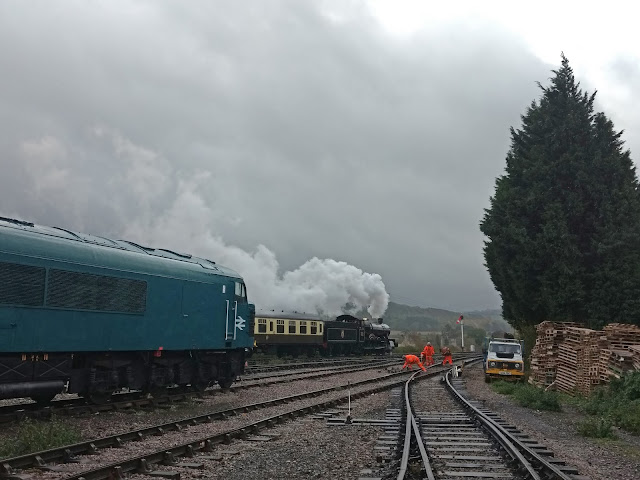 It was Dinmore's day today, and here she can be seen steaming into the weather past the Peak and David with the cutting disk.

We had a few showers, and then it became warmer and warmer and at the end of the day we were all stripped off again, some of us working with bare arms too. Strange weather. 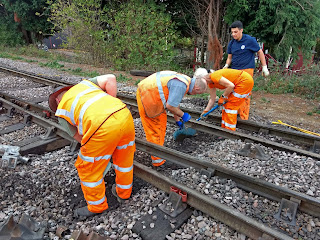 Once out, the remaining bed needs to be cleared of loose ballast, otherwise the replacement will get stuck when you try to drag it in.

This is all quite hard work, and a rest from time to time would be welcome. 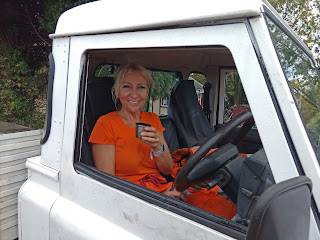 Some people didn't have to be told, and Diana here has found the new Landie an ideal place to sit back and enjoy a nice cuppa. 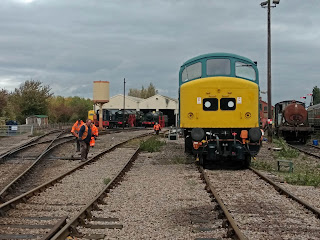 Next to them is the Peak, whose bufferbeam has decided to go one way, while the bodywork is going another. It looks decidedly awry. 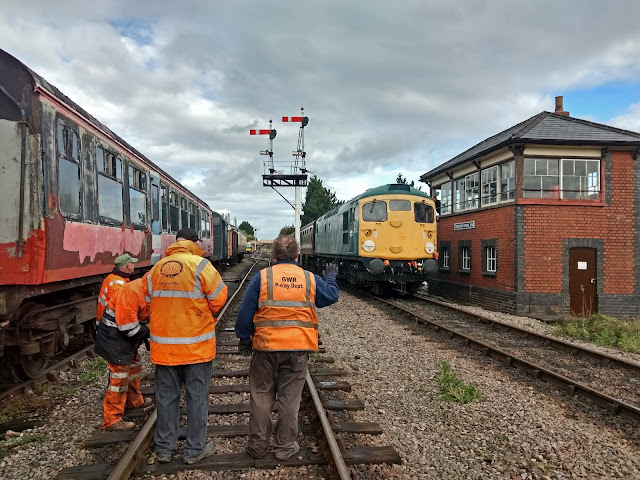 The clip replacing team, having finished the yard, then decided to work its way down the second loop, where we met our class 26 D5343 pulling away from the signal box.

This road may possibly be used as a running line in the future, but at the moment it is used as a link between the yard and the platforms. 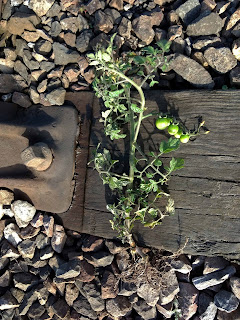 In this area we can find our oldest track, this being the first to be laid when we came to the site in 1981 and found it bare of track.

Amongst various weeds found growing along it was this tomato plant, with its roots firmly dug into the four foot.

How its seeds got here is not for a family blog though.

Great was our pleasure when we were joined mid morning by John o' th' Knees, now back on his pins and without his trusty umbrella.

It is John who took all the early photographs of our railway, starting in 1981. They are being slowly uploaded on to the 'early GWSR' Flickr site:

Another 40 odd pictures have recently gone up, this time including the opening train to Winchcombe on 2nd August 1988. That makes 360 of his pictures up on the site now, and there are quite a few more to come, as time allows. All the slides need scanning, then cleaning with Photoshop, so that takes time. 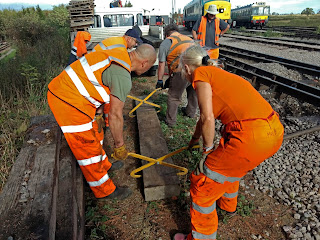 After removing the 4 life expired - and crushed - sleepers on the turnout, it was time to drag in the new ones, fetched up by our most useful new Landie with its longer loading deck.

These timbers are hardwood but no matter, David and Diana got stuck in straight away. 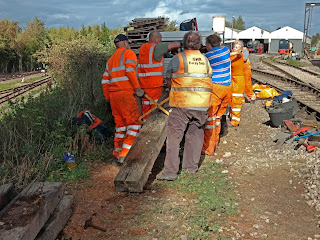 As soon as all the new timbers were off, we dragged up the old ones and heaved them on. Strangely some were still extremely heavy, despite being rotten. That's hardwood for you. 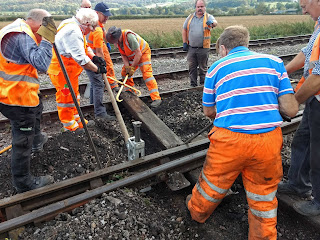 After bolting up, packing and back filling the four timbers on the turnout, our eye fell on some dubious looking examples on the turnout next door. We decided to do these as well, after lunch.

Here is one of the second lot being heaved out. It required a lot of extra digging, due to the proximity of other trackwork around it. 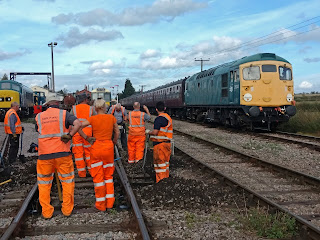 We had to grit our teeth a bit when this train came past. While we were slaving away below, the guilty perpetrators of the tender derailment cruised effortlessly past us in a comfortable Mk1 seat, waving to us as minor royalty. Hey......... 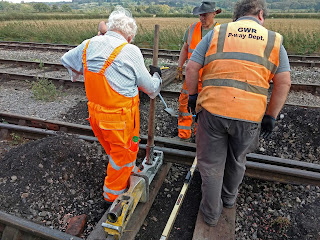 These two new heavy duty timbers have just gone in. Before we screw them down, we not unnaturally would like to know if everything is nice and to gauge here.

It wasn't, far too tight.

The answer was to employ two Duff jacks back to back and give one side a bit of a push. After bolting down the other side first of course. 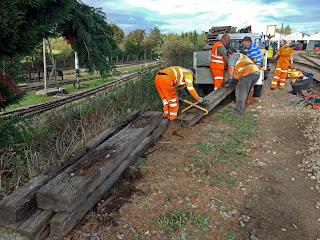 Then it was more clearing up of failed sleepers, this time the second 4 we took out today. It takes at least 4 people to lift one up into the Landie.

We still have a bit more work to do in this area, so will be back next week. 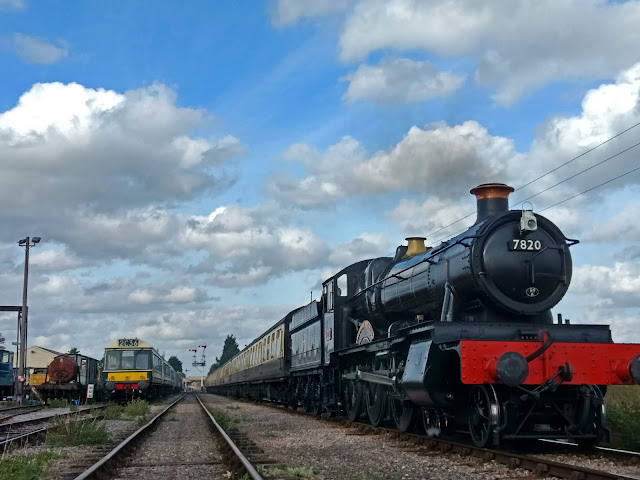 The failed sleepers also make a nice place to sit and rest the weary bones, just as Dinmore comes by with the final train south.