During the week, various activities take place in support of the Saturday track laying gang. It's quite a logistical exercise. For example, PWay wagons have to be unloaded before further supplies to be accepted, and taken away from the extension to the point of delivery of the materials.

Two such exercises are taking place at the moment. 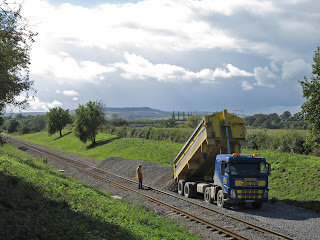 There's so much more to track laying than putting down the sleepers and the rail. In the background, serious money is being spent on fresh ballast, which comes from the Forest of Dean. Just goes to show how far the beneficial economic impact of our activities does spread. 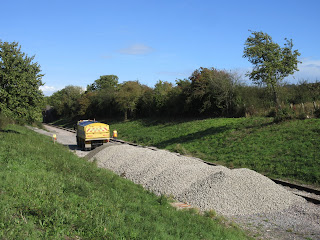 On Friday no fewer than fourteen 20 ton lorry loads were delivered to the loading site at Stanton. It's £500 a lorry load, so those of us that bought £500 worth of shares can say: 'I bought a lorry load'. Your contribution makes quite an impact, as you can see.

If you remember the PWay train passing through Hayles Abbey Halt, you will have noticed that it had 3 Dogfish ballast wagons on it going south, and 6 going back up north. The three extra ones, with this delivery in mind, were collected from the Hunting Butts end of the line, and formed into a train of 6. At the same time, the next supply of sleepers had to be delivered to Little Buckland. This was Monday.
On Wednesday, 9 lengths of rail were welded up at Little Buckland, and the remainder fishplated with clamps, in order to allow this train up to the railhead.

Then came a reader's request to photograph the train on Little Buckland bridge. Thanks to good cooperation with the driver Neil, we can meet this request - here it is:

Your blogger was stood in a field to take a video of the train crossing the bridge, but it stopped here. The result was half a video with no class 73 on it, all part of the game. The reason was that the sleeper wagons had to be positioned by the widest part of the trackbed, so that the Telehandler had easy access to the sleepers. 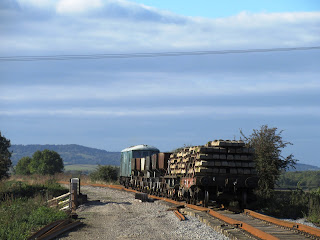 Here the train slowly rolls to a stop on top of the bridge. 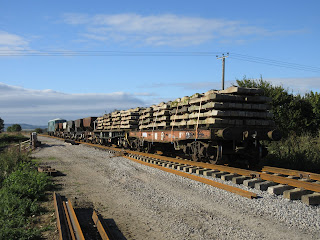 The sleeper wagons are perfectly positioned for unloading at the widest part. This will be done on Saturday. The 300 or so sleepers all need to be off by the end of the day, as another gang is beavering away at the Gotherington site sorting out a new stack.

We have almost used up all the SHC type sleepers, and are about to move on to the more modern Pandrol type. 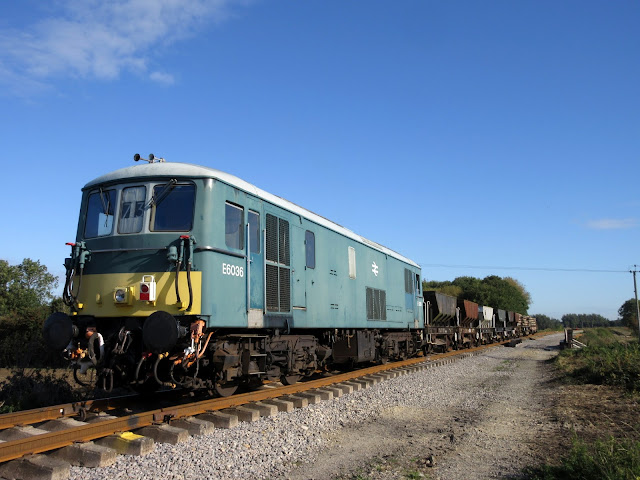 With the last two wagons disconnected, the train is about to set off again, this time with the 6 empty Dogfish ballast wagons in tow.
What a marvellous loco the class 73 is. Conceived for the southern 3rd rail system, it only had a 'get you home' type diesel for moments when it was off the grid, and here we see it in action with no third rail in sight.

The empty wagons were then taken to Stanton, where Steve was waiting with the JCB in order to load them.

You can see a video of the train trundling back down the start of the extension, in the vicinity of the recently relaid former Laverton temporary storage siding, in this clip here:
https://youtu.be/RLAROn_GRbU

At Stanton, the wagons were parked up and Steve got to work. 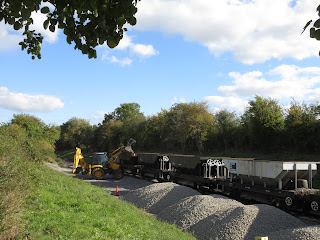 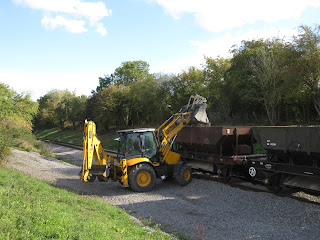 As the Dogfish also hold 20 tons, the pile at Stanton should be able to fill two trains. At the moment, it looks as if the first drop will take place next Wednesday. The load will be dropped on to the Laverton loop / temporary storage siding area, which has been relaid and is now without ballast.


However, logistics to the forefront again - the bogie flats with sleepers delivered to Little Buckland today have to be removed first, and taken to Gotherington for loading again on Monday.

Then - and this is not the end of the logistical manoeuverings - the two bogie flats used for the transport of the new rail have to be positioned at Toddington on the delivery siding. Remember how they had the remaining rail dragged off at Little Buckland? That was to permit the reception of the next load of 56 rails, which is coming - also on Monday ! Phew! And this is a hobby?